On permutation quadrinomials and 4-uniform BCT

We study a class of general quadrinomials over the field of size 2^2m with odd m and characterize conditions under which they are permutations with the best boomerang uniformity, a new and important parameter related to boomerang-style attacks. This vastly extends previous results from several recent papers. 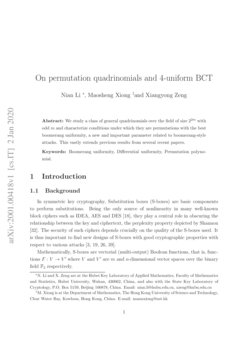 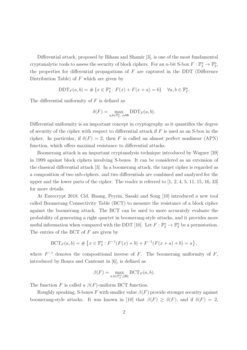 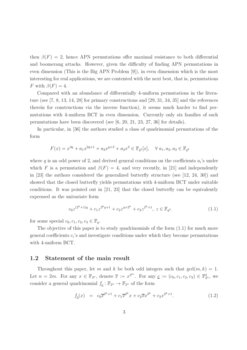 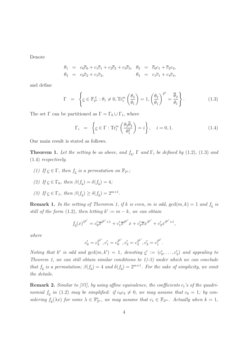 In symmetric key cryptography, Substitution boxes (S-boxes) are basic components to perform substitutions. Being the only source of nonlinearity in many well-known block ciphers such as IDEA, AES and DES [18], they play a central role in obscuring the relationship between the key and ciphertext, the perplexity property depicted by Shannon [32]. The security of such ciphers depends crucially on the quality of the S-boxes used. It is thus important to find new designs of S-boxes with good cryptographic properties with respect to various attacks [3, 19, 26, 39].

Mathematically, S-boxes are vectorial (multi-output) Boolean functions, that is, functions F:V→V′ where V and V′ are m and n

Differential attack, proposed by Biham and Shamir [3], is one of the most fundamental cryptanalytic tools to assess the security of block ciphers. For an n-bit S-box F:Fn2→Fn2, the properties for differential propagations of F are captured in the DDT (Difference Distribution Table) of F which are given by

The differential uniformity of F is defined as

Boomerang attack is an important cryptanalysis technique introduced by Wagner [39] in 1999 against block ciphers involving S-boxes. It can be considered as an extension of the classical differential attack [3]. In a boomerang attack, the target cipher is regarded as a composition of two sub-ciphers, and two differentials are combined and analyzed for the upper and the lower parts of the cipher. The reader is referred to [1, 2, 4, 5, 11, 15, 16, 33] for more details.

introduced a new tool called Boomerang Connectivity Table (BCT) to measure the resistance of a block cipher against the boomerang attack. The BCT can be used to more accurately evaluate the probability of generating a right quartet in boomerang-style attacks, and it provides more useful information when compared with the DDT

where F−1 denotes the compositional inverse of F. The boomerang uniformity of F, introduced by Boura and Canteaut in [6], is defined as

The function F is called a β(F)-uniform BCT function.

Roughly speaking, S-boxes F with smaller value β(F) provide stronger security against boomerang-style attacks. It was known in [10] that β(F)≥δ(F), and if δ(F)=2, then β(F)=2, hence APN permutations offer maximal resistance to both differential and boomerang attacks. However, given the difficulty of finding APN permutations in even dimension (This is the Big APN Problem [9]), in even dimension which is the most interesting for real applications, we are contented with the next best, that is, permutations F with β(F)=4.

Compared with an abundance of differentially 4-uniform permutations in the literature (see [7, 8, 13, 14, 28] for primary constructions and [29, 31, 34, 35] and the references therein for constructions via the inverse function), it seems much harder to find permutations with 4-uniform BCT in even dimension. Currently only six families of such permutations have been discovered (see [6, 20, 21, 23, 27, 36] for details).

In particular, in [36] the authors studied a class of quadrinomial permutations of the form

where q is an odd power of 2, and derived general conditions on the coefficients ai’s under which F is a permutation and β(F)=4, and very recently, in [21] and independently in [23] the authors considered the generalized butterfly structure (see [12, 24, 30]) and showed that the closed butterfly yields permutations with 4-uniform BCT under suitable conditions. It was pointed out in [21, 23] that the closed butterfly can be equivalently expressed as the univariate form

The objective of this paper is to study quadrinomials of the form (1.1) for much more general coefficients ci’s and investigate conditions under which they become permutations with 4-uniform BCT.

1.2 Statement of the main result

The set Γ can be partitioned as Γ=Γ0∪Γ1, where

Our main result is stated as follows.

Our computer experiments seem to indicate that if fc– is a permutation over F2n, then it is necessary that c–∈Γ. When k=1, this is indeed the case and was recently proved in [22]. For a general k, however, the method used there does not seem to work. We will come back to this question in the near future. If this “necessity property” were proved, then Theorem 1 indicates that fc– is a permutation with 4-uniform BCT if and only if c–∈Γ0, that is, the set Γ0 completely charaterizes permutaitons fc– with 4-uniform BCT. This may be another reason why we would expect that [23, Theorem 2] and [21, Theorem 1.1] can be derived from (1) and (2) of Theorem 1.

The rest of this paper is organized as follows: in Section 2 we collect some solvability criteria on certain equations over finite fields which will be used repeatedly in the paper; in Section 3 we present some identities and relations involving the ci’s and θi’s from the quarinomial fc–; in Section 4 we discuss in details the solvability of the difference equation fc–(x+a)+fc–(x)=b; in Section 5 which is the longest section of the paper, we prove the main result, dealing with Parts (1), (3) and (2) of Theorem 1 individually in three seperate subsections.

The following three results will be used repeatedly in the rest of the paper.

is solvable (with two solutions) in F2n if and only if

Here Trn1(⋅) is the absolute trace map from F2n to the binary field F2.

When k=1, Lemma 3 reduces to [36, Lemma 3] which played a central role in computing the boomerang uniformity in the paper. Comparing with [36, Lemma 3], our criteria seems a little simpler.

Before proceeding to the proof of the main result, in this section we collect some useful identities and relations which play important roles in the rest of the paper.

Recall the setting of Theorem 1 in Section 1 for all the notions m,n,k,Γ, etc.

we can find ξ∈F2n such that

We fix such an element ξ. It is known that

Identities (1)-(5) can be verified by a routine computation. Only (6) requires some explanation.

Next, for any a∈F∗2n, define

Define η(2):=η∘η (this is to avoid confusion which might result from using the more standard notation η2). It is easy to see that

With some computation, we can obtain that

This clearly shows that M(z)=M(a).

where the coefficients A,B,C,D are given by

From the above identities and also using (3.8), we can easily verify that