We prove an exponential decay concentration inequality to bound the tail probability of the difference between the log-likelihood of discrete random variables and the negative entropy. The concentration bound we derive holds uniformly over all parameter values. The new result improves the convergence rate in an earlier result of Zhao (2020), from (K^2log K)/n=o(1) to (log K)^2/n=o(1), where n is the sample size and K is the number of possible values of the discrete variable. We further prove that the rate (log K)^2/n=o(1) is optimal. The results are extended to misspecified log-likelihoods for grouped random variables. 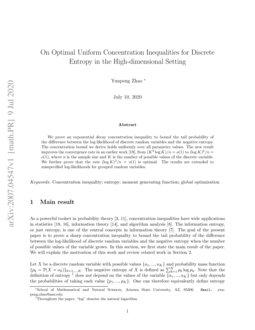 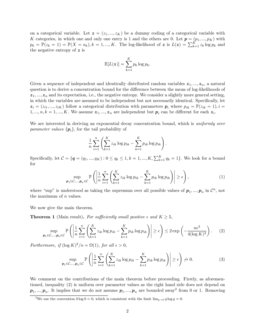 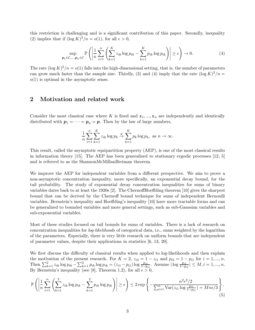 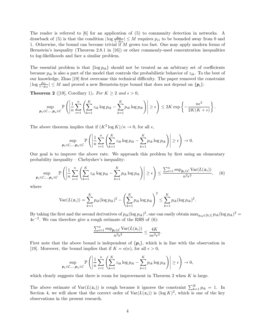 We introduce methods to bound the mean of a discrete distribution (or fi...
Eric Bax, et al. ∙

On the Compressibility of Affinely Singular Random Vectors

There are several ways to measure the compressibility of a random measur...
Mohammad-Amin Charusaie, et al. ∙

As a powerful toolset in probability theory

[3, 11], concentration inequalities have wide applications in statistics [18, 16], information theory [14], and algorithm analysis [8]. The information entropy, or just entropy, is one of the central concepts in information theory [7]. The goal of the present paper is to prove a concentration inequality with the optimal rate to bound the tail probability of the difference between the log-likelihood of discrete random variables and the negative entropy when the number of possible values of the variable grows. In this section, we first state the main result of the paper. We will explain the motivation of this work and review related work in Section 2.

Let X be a discrete random variable with possible values {a1,...,aK} and probability mass function {pk=P(X=ak)}k=1,...,K. The negative entropy of X is defined as ∑Kk=1pklogpk. Note that the definition of entropy 111Throughout the paper, “log” denotes the natural logarithm. does not depend on the values of the variable {a1,...,aK} but only depends the probabilities of taking each value {p1,...,pK}

. One can therefore equivalently define entropy on a categorical variable. Let

Given a sequence of independent and identically distributed random variables z1,...,zn, a natural question is to derive a concentration bound for the difference between the mean of log-likelihoods of z1,...,zn and its expectation, i.e., the negative entropy. We consider a slightly more general setting, in which the variables are assumed to be independent but not necessarily identical. Specifically, let zi=(zi1,...,ziK) follow a categorical distribution with parameters pi where pik=P(zik=1),i=1,...,n,k=1,...,K. We assume z1,...,zn are independent but pi can be different for each zi.

We are interested in deriving an exponential decay concentration bound, which holds uniformly over parameter values {pi}, for the tail probability of

where “sup” is understood as taking the supremum over all possible values of p1,...,pn in Cn, not the maximum of n values.

We now give the main theorem.

Most results in the paper in fact hold for K=1. The corresponding log-likelihood is however non-random so we exclude this trivial case.

We comment on the contributions of the main theorem before proceeding. Firstly, as aforementioned, inequality (2) is uniform over parameter values as the right hand side does not depend on p1,...,pn. Note that we do not assume p1,...,pn are bounded away222We use the convention 0log0=0, which is consistent with the limit limq→0qlogq=0. from the boundaries. Removing this restriction is a challenge and a significant contribution of this paper. Secondly, inequality (2) implies that if (logK)2/n=o(1), for all ϵ>0,

Consider the most classical case where K is fixed and z1,...,zn are independently and identically distributed with p1=⋯=pn=p

. By the law of large numbers,

This result, called the asymptotic equipartition property (AEP), is one of the most classical results in information theory [15]. The AEP has been generalized to stationary ergodic processes [12, 5] and is referred to as the Shannon-McMillan-Breiman theorem.

[2]. The Chernoff-Hoeffding theorem [10] gives the sharpest bound that can be derived by the Chernoff bound technique for sums of independent Bernoulli variables. Bernstein’s inequality and Hoeffding’s inequality [10] give concentration bounds with more tractable forms and can be generalized to bounded variables and more general settings, such as sub-Gaussian variables and sub-exponential variables.

Most of these studies focused on tail bounds for sums of variables. There is a lack of research on concentration inequalities for log-likelihoods, i.e., sums weighted by logarithms of the parameters. Uniform bounds that are independent of parameter values are particularly under-explored, despite their applications in statistics [6, 13, 20].

The reader is referred to [6] for an application of (5) to community detection in networks. A drawback of (5) is that the condition |logpi11−pi1|≤M requires pi1 to be bounded away from 0 and 1. Otherwise, the bound can become trivial if M grows with n too fast. One may apply alternative forms of Bernstein’s inequality (for example, Theorem 2.8.2 in [16]) or other commonly-used concentration inequalities to log-likelihoods and faces a similar problem.

The essential problem is that {logpik} should not be treated as an arbitrary set of coefficients because pik is also a part of the model that controls the probabilistic behavior of zik. To the best of our knowledge, Zhao [19] first overcame this technical difficulty. The paper removed the constraint |logpi11−pi1|≤M and proved a new Bernstein-type bound that does not depend on {pi}:

The above theorem implies that if (K2logK)/n→0, for all ϵ,

Our goal is to improve the above rate. We approach this problem by first considering an elementary probability inequality – Chebyshev’s inequality:

By taking the first and the second derivatives of pik(logpik)2, one can easily prove maxpik∈[0,1]pik(logpik)2=4e−2

. We can therefore give a rough estimate of the right hand side of (

First note that the above bound is independent of {pi}, which is in line with the observation in [19]. Moreover, the bound implies that if K=o(n), for all ϵ>0,

which clearly suggests that there is room for improvement in Theorem 2 when K is large.

The rest of the paper is organized as follows. In Section 3, we prove the concentration inequalities for fixed parameters p1,...,pn by classical techniques. In Section 4

, we elaborate the main theorem and prove it through a series of lemmas and theorems. Our approach relies on bounding certain moment generating functions (MGFs). To bound the MGFs, we borrow the idea of primal and dual from the literature of optimization. In Section

5, we extend the results to misspecified log-likelihoods for grouped random variables.

We prove concentration inequalities for fixed p1,...,pn in this section, where each pi is an interior point of C. The proofs are not challenging. But the results do not exist in the literature as the form we present below, to the best of our knowledge. So we include them for completeness. Moreover, the proofs shed light on the asymmetry of the two sides of the bound and the challenge in proving the uniform bound.

The rest of the proof follows from a standard Chernoff bound argument on sub-Gaussian variables (for example, see Chapter 2 of [18]). For λ>0, by Markov’s inequality,

We obtain the result by letting λ=nϵ2∑ni=1∑Kk=1pik(logpik)2. ∎

The rest of the proof follows from a standard Chernoff bound argument on sub-exponential variables. For −1/b≤λ<0, by a similar argument in (9),

A key difference between the two results is in the second inequality of (8) and (12), where λ in the two theorems have opposite signs. The inequality in (8) always holds since λlogpik≤0, but the inequality in (12) cannot be true for a large λlogpik when λ<0 because of the exponential growth. Therefore, it is not difficult to find a quantity that does not depend on {pi} to bound the right-tail probability according to the discussion in Section 2 (obtaining the optimal order (logK)2 is however nontrivial and will be shown in Section 4). To find a uniform bound for the left-tail probability is, however, more challenging since a positive b does not exist in Theorem 4 if pik→0 for some i,k. We develop a new technique to uniformly control λlogpik when λ<0 in Section 4.

The asymmetry of the left and right tails can be understood by the following heuristic argument. Note that

4 Proof of the main result

We begin by a lemma on the upper bound for Var(L(zi)), which may be of independent interest. Below we omit the index i since the result is independent of i.

The statement in the lemma is equivalent to the following optimization problem:

The argument above shows that for all ν∈R, g(ν) is an upper bound for the original problem maxp∈C∑Kk=1pk(logpk)2. Below we pick ν=−(logK)2+2logK. Note that the optimization problem

By taking the derivative with respect pk, the local maximizer satisfies

There are two candidate solutions of the quadratic equation y2+2y+ν=0:

The corresponding solutions of pk are

Lemma 1 can be viewed as a second-order version of a well-known inequality for entropies: −∑Kk=1pk(logpk)≤logK, which can be proved by Jensen’s inequality (see Theorem 2.6.4 in [7]). But Lemma 1 is more difficult to prove because the function involved is neither convex nor concave.

The next theorem immediately follows from Lemma 1 and (6).

Then it is easy to check that

C is an absolute constant. Therefore,

[17] for example). It is also worth mentioning that Var(Xn)↛0 does not automatically imply P(|Xn−E[Xn]|>ϵ)↛0 for an arbitrary sequence {Xn}. The result in (13) relies on tail behavior of the sum of independent variables.

We now prove the exponential decay bound (2). The right-tail bound is relatively easy to prove as pointed out in Section 3.

The first conclusion immediately follows from (7) and Lemma 1. By the standard Chernoff bound argument on sub-Gaussian variables as in Theorem 3, for all p1∈C,...,pn∈<span class="mjx-char MJXc-TeX-cal-R" style="padding-top: 0.446em; padding-bottom: 0.372em; pa