Locally repairable codes which are optimal with respect to the bound presented by Prakash et al. are considered. New upper bounds on the length of such optimal codes are derived. The new bounds both improve and generalize previously known bounds. Optimal codes are constructed, whose length is order-optimal when compared with the new upper bounds. The length of the codes is super-linear in the alphabet size. 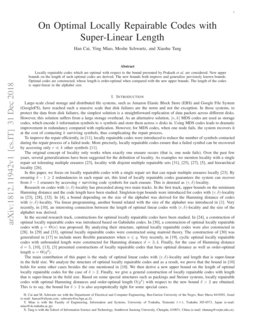 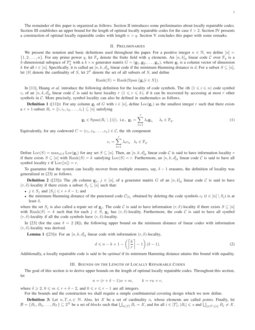 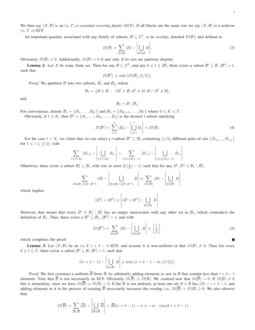 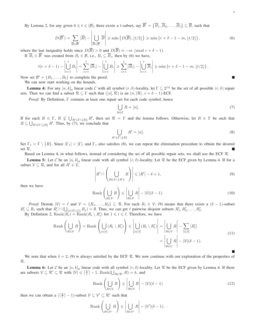 Large-scale cloud storage and distributed file systems, such as Amazon Elastic Block Store (EBS) and Google File System (GoogleFS), have reached such a massive scale that disk failures are the norm and not the exception. In those systems, to protect the data from disk failures, the simplest solution is a straightforward replication of data packets across different disks. However, this solution suffers from a large storage overhead. As an alternative solution, [n,k] MDS codes are used as storage codes, which encode k information symbols to n symbols and store them across n disks in. Using MDS codes leads to dramatic improvement in redundancy compared with replication. However, for MDS codes, when one node fails, the system recovers it at the cost of contacting k surviving symbols, thus complicating the repair process.

The original concept of locality only works when exactly one erasure occurs (that is, one node fails). Over the past few years, several generalizations have been suggested for the definition of locality. As examples we mention locality with a single repair set tolerating multiple erasures [23], locality with disjoint multiple repairable sets [31, 25, 27, 5], and hierarchical locality [26].

-locality. Via linear programming, another bound related with the size of the alphabet was introduced in

[1]. Very recently, in [10], an interesting connection between the length of optimal linear codes with (r,δ)-locality and the size of the alphabet was derived.

We present the notation and basic definitions used throughout the paper. For a positive integer n∈N, we define [n]={1,2,…,n}. For any prime power q, let Fq denote the finite field with q elements. An [n,k]q linear code C over Fq is a k-dimensional subspace of Fnq with a k×n generator matrix G=(g1,g2,…,gn), where gi

is a column vector of dimension

k for all i∈[n]. Specifically, it is called an [n,k,d]q linear code if the minimum Hamming distance is d. For a subset S⊆[n], let |S| denote the cardinality of S, let 2S denote the set of all subsets of S, and define

In [11], Huang et al. introduce the following definition for the locality of code symbols. The ith (1⩽i⩽n) code symbol ci of an [n,k,d]q linear code C is said to have locality r (1⩽r⩽k), if it can be recovered by accessing at most r other symbols in C. More precisely, symbol locality can also be defined in mathematics as follows.

For any column gi of G with i∈[n], define Loc(gi) as the smallest integer r such that there exists a r+1-subset Ri={i,i1,i2,…,ir}⊆[n] satisfying

Equivalently, for any codeword C=(c1,c2,…,cn)∈C, the ith component

To guarantee that the system can locally recover from multiple erasures, say, δ−1 erasures, the definition of locality was generalized in [23] as follows.

The jth column gj, j∈[n], of a generator matrix G of an [n,k]q linear code C is said to have (r,δ)-locality if there exists a subset Sj⊆[n] such that:

In [23] (for the case δ=2 [8]), the following upper bound on the minimum distance of linear codes with information (r,δ)-locality was derived.

Additionally, a locally repairable code is said to be optimal if its minimum Hamming distance attains this bound with equality.

Iii Bounds on the Length of Locally Repairable Codes

The goal of this section is to derive upper bounds on the length of optimal locally repairable codes. Throughout this section, let

For the bounds and the construction we shall require a simple combinatorial covering design which we now define.

An important quantity associated with any family of subsets, B⊆2X, is its overlap, denoted D(B), and defined as

Obviously D(B)⩾0. Additionally, D(B)=0 if and only if its sets are pairwise disjoint.

Let X be some finite set. Then for any B⊆2X, and any 0⩽t⩽|B|, there exists a subset B′⊆B, ∣∣B′∣∣=t, such that

We partition B into two subsets, B1 and B2, where

However, that means that every B′∈B1∖B∗1 has an empty intersection with any other set in B1, which contradicts the definition of B1. Thus, there exists a B′′⊆B1, ∣∣B′′∣∣=t, and with

We can now start working on the bounds.

By Definition, Γ contains at least one repair set for each code symbol, hence

Based on Lemma 4, in what follows, instead of considering the set of all possible repair sets, we shall use the ECF R.

We note that when δ=2, (9) is always satisfied by the ECF R. We now continue with our exploration of the properties of R.

where the last inequality holds by the fact R′′⊆R′∖(⋃R∈VR) and (12). Therefore, repeating the above operations, we can extend V to be a (⌈kr⌉−1)-subset V′⊆R′ such that

Let C be an [n,k]q linear code with all symbol (r,δ)-locality. Let R be the ECF given by Lemma 4. Assume V⊆R such that |V|⩽⌈kr⌉−1. If there exists a R′∈V such that

Considering the set V′′∪{R′}, we have

where the last inequality holds due to the fact that R′⊈⋃R∈V′′R by the properties of the ECF R.

we can find a set S with Rank(S)=k−1 by taking (⋃R∈V′′∪{R′}R) and adding arbitrary coordinates until reaching the desired rank. This set S has size

Let C be an [n,k]q linear code with all symbol (r,δ)-locality. Let R be the ECF given by Lemma 4. Assume V⊆R such that |V|⩽⌈kr⌉−1. If Δ is an integer such that

Again, by the same analysis as in Lemma 6, we can obtain yet another set R′∈R∖V′ with Rank(R′∪(⋃R∈V′)R)>Rank(⋃R∈V′R) and then

Having collected sufficient insight into the structure of repair sets, we are now at a position to state and prove the first main tool in proving our bounds.

Otherwise, we have D(R)≠0 or |R|<r+δ−1 for some R∈R. We distinguish between two cases. First, assume k>2r. According to Lemma 3 we can find a (⌈kr⌉−1)-subset V⊆R satisfying

Thus, we can take a non-trivial linear combination of the k rows of the generator matrix G that results in a non-zero codeword which has zeroes in the positions of S, hence,

This is a contradiction to the optimality of C with respect to the bound in Lemma 1.

which is again a contradiction with the optimality of C with respect to the bound in Lemma 1. ∎

We take a short break to consider the special case of δ=2. This special case was studied in [10] and an upper bound on the length of optimal codes was obtained. While we obtain the exact same bound as [10], our bound is an improvement since it has more relaxed conditions. In particular, the bound of [10] requires k=Ω(dr2) whereas we require k=Ω(r2). We now provide the exact claim:

We bring another corollary the stems from Theorem 1. It slightly extends [28, Theorem 9], originally proved only for r|k, and has a very similar proof which we bring for completeness.