On Norm-Agnostic Robustness of Adversarial Training

Adversarial examples are carefully perturbed in-puts for fooling machine learning models. A well-acknowledged defense method against such examples is adversarial training, where adversarial examples are injected into training data to increase robustness. In this paper, we propose a new attack to unveil an undesired property of the state-of-the-art adversarial training, that is it fails to obtain robustness against perturbations in ℓ_2 and ℓ_∞ norms simultaneously. We discuss a possible solution to this issue and its limitations as well. 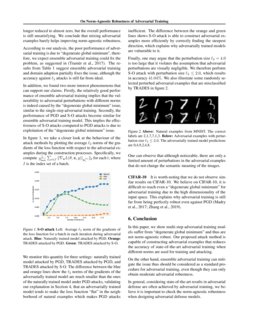 . At the same time, vulnerability to adversarial examples, an undesired property of DNNs, has drawn attention in the deep-learning community

(Goodfellow et al., 2014). The existence of adversarial examples has raised many concerns, especially in scenarios with a high risk of misclassification, such as autonomous driving.

The strength of attacks are commonly quantified by the ℓp distance between adversarial examples and natural examples. One desired property of a defense model is norm-agnostic, which requires a model to be robust against attacks constrained by a variety of norms. Recently, a more general attack mechanism called unrestricted adversarial attacks are introduced by Brown et al. (2018), where adversarial examples are not necessarily close to a natural image as long as they are semantically similar. To achieve robustness against unrestricted attacks, being norm-agnostic is a minimum requirement.

Given a classifier f:X→{1,…,k} for an image x∈X, an adversarial example xadv satisfies D(x,xadv)<ϵ for some small ϵ>0, and f(x)≠f(xadv), where D(⋅,⋅) is some distance metric, i.e., xadv is close to x but yields a different classification result. The distance is often described in terms of an ℓp metric, and in most of the literature ℓ2 and ℓ∞ metrics are considered.

One of the simplest and widely used attack methods is a single-step method, the Fast Gradient Sign Method (FGSM) (Kurakin et al., 2016), which manipulates inputs along the direction of the gradient with respect to the outputs:

where Πx+S is the projection operation that ensures adversarial examples stay in the ℓp ball S around x.

Its multi-step variant FGSMk is more powerful and has been shown to be equivalent to exploring adversarial examples with the projected gradient descent (PGD) method (Madry et al., 2017):

The motivation behind adversarial training is that finding a robust model against adversarial examples is equivalent to solving the saddle-point problem:

The inner maximization is equivalent to constructing adversarial examples, while the outer minimization can be performed by standard training procedure for loss minimization.

In (Tramèr et al., 2017), it is pointed out that if xadv denotes the adversarial example generated by FGSM, adversarial training ideally results in a robust classification model \mathchar28946\relax∗ such that:

However, the training procedure may instead discover a “degenerate global minimum” \mathchar28946\relax∗:

In another word, the training procedure may generate a model that makes finding adversarial examples difficult for FGSM instead of a truly robust model.

We propose a new attack motivated by the “degenerate global minimum”. Note adversarial training is equivalent to solving the optimization problem:

x, which leads to inefficient exploration for adversarial examples when performing attacks. This is intuitively the cause of “degenerate global minimum”.

To this end, assume the loss function is twice differentiable with respect to x. Using Taylor expansion on the difference between the losses on the original and perturbed samples, and assuming the gradient vanishes, we have

. Our idea is based on the observation that the optimal perturbation direction should be in the same direction as the first dominant eigenvector,

is a randomly sampled unit vector and

ξ>0 is a manually chosen step size. In practice, d

This procedure is essentially a stochastic approximation to the optimal second-order direction, where the randomness comes from d

. To reduce the variance of the approximation, we further take the expectation over the Gaussian noise, yielding

g=Ed∼N(0,σ2I)[∇xL(\mathchar28946\relax,x,y)|x+d]. Note that choosing σ is equivalent to choosing the step size ξ in (3). Finally, we construct adversarial examples by an iterative update via PGD:

where gt=Ed∼N(0,σ2I)[∇xL(\mathchar28946\relax,x,y)|x+d]. Intuitively, this method perturbs the example at each iteration and tries to move out of the local maximum in the sample space, due to the introduction of random Gaussian noise.

We perform experiments on the MNIST data set to validate our claims on adversarial training.

The architecture of our model follows the ones used in (Madry et al., 2017). Specifically, the model contains two convolutional layers with 32 and 64 filters, each followed by 2×2max-pooling, and a fully connected layer of size 1024. Image intensities are scaled to [0,1], and the size of attacks are also rescaled accordingly. In all the experiments, we bound the ℓ2 norm less than 4.0 while the ℓ∞ norm less than 0.3.

Specifically, we first consider constructing adversarial examples with ℓ2 and ℓ∞ constraints during training respectively. Table 1 shows, as expected, that Madry’s model and TRADES successfully defend attacks with the same norm constraints. However, in spite of the fact that ℓ∞ adversarial training stays robust against ℓ2 PGD attack, S-O attack can effectively reduce the accuracy of both models when a different norm is used. This suggests that standard adversarial training is not norm-agnostic.

It is natural to wonder whether the issue will be fixed if two kinds of adversarial examples are both included during training. To this end, we conduct additional experiments with mixed adversarial examples, that is alternating between ℓ2 and ℓ∞ bounded examples for adversarial training. Using the mixed strategy, the accuracy on both attacks are no longer reduced to almost zero, but the overall performance is still unsatisfying. We conclude that mixing adversarial examples barely helps improving norm-agnostic robustness.

In figure 1, we take a closer look at the behaviour of the attack methods by plotting the average ℓ2 norms of the gradients of the loss function with respect to the adversarial examples during the construction processes. Specifically, we compute 1Nbatch∑i∈I∥∇xL(\mathchar28946\relax,x,y)|x(t)i∥2 for each t, where I is the index set of a batch.

Finally, one may argue that the perturbation size ℓ2=4.0 is too large that it violates the assumption that adversarial perturbations are visually negligible. We therefore perform S-O attack with perturbation size ℓ2≤2.0, which results in accuracy 41.04%. We also illustrate some randomly selected perturbed adversarial examples that are misclassified by TRADES in figure 2.

One can observe that although noticeable, there are only a limited amount of perturbations in the adversarial examples that do not change the semantic meaning of the images.

It is worth-noting that we do not observe similar results on CIFAR-10. We believe on CIFAR-10, it is difficult to reach even a “degenerate global minimum” for adversarial training due to the high dimensionality of the input space. This explains why adversarial training is still far from being perfectly robust even against PGD (Madry et al., 2017; Zhang et al., 2019).

In this paper, we show multi-step adversarial training models suffer from “degenerate global minimum” and thus are not norm-agnostic robust. Our proposed attack method is capable of constructing adversarial examples that reduces the accuracy of state-of-the-art adversarial training when different norms are used for training and attacking.

Power iteration method [golub2001eigenvalue] allows one to compute the dominant eigenvector r of a matrix H. Let d0 be a randomly sampled unit vector which is not perpendicular to r, the iterative calculation of

leads to dt→r. Given H is the Hessian matrix of L(\mathchar28946\relax,x,y), we further use finite difference method to reduce the computational complexity:

where ξ>0 is the step size. If we only take one iteration, it gives an approximation that only requires the first-order derivative: