In this paper, we develop nonparametric inference on spatial regression models as an extension of Lu and Tjøstheim (2014), which develops nonparametric inference on density functions of stationary spatial processes under domain expanding and infill (DEI) asymptotics. In particular, we derive multivariate central limit theorems of mean and variance functions of nonparametric spatial regression models. Build upon those results, we propose a method to construct confidence bands for mean and variance functions. We also propose a practical method for bandwidth selection. 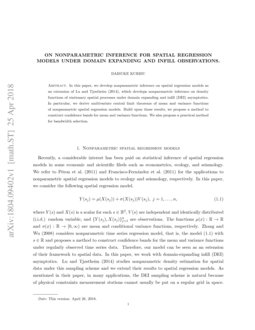 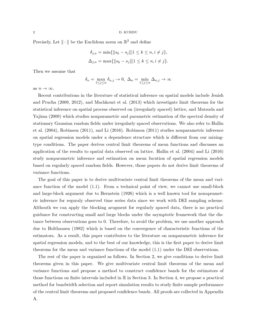 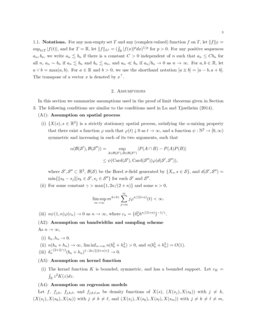 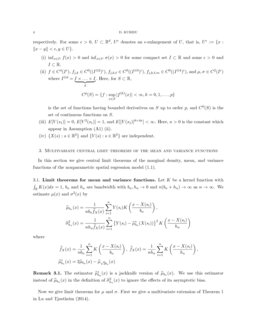 In this paper, we study nonparametric inference for a stationary Lévy-dr...
Daisuke Kurisu, et al. ∙

It is often of interest to make inference on an unknown function that is...
Aaron Hudson, et al. ∙

We consider the problem of adaptive inference on a regression function a...
Koohyun Kwon, et al. ∙

Much of the research on multiple comparison and simultaneous inference i...
Jianan Peng, et al. ∙

are independent and identically distributed (i.i.d.) random variables, and

proposed a scheme of domain-expanding and infill (DEI) asymptotics and studied nonaprametric density estimation for spatial data under this sampling scheme. In this paper, we are extending their results to spatial regression models in a relatively simple setting under their sampling scheme. As mentioned in their paper, in many applications, the DEI sampling scheme is natural because of physical constraints measurement stations cannot usually be put on a regular grid in space. Precisely, Let

∥⋅∥ be the Euclidean norm on R2 and define

Then we assume that δn=max1≤j≤nδn,j→0, Δn=min1≤j≤nΔn,j→∞ as n→∞. There are some papers whose sampling schemes are related to the DEI asymptotics. Hall and Patil (1994)

investigated nonparametric estimation of spatial covariance function based on observations generated by a probability distribution.

Matsuda and Yajima (2009) work with a similar sampling scheme and focus on the nonparametric and parametric estimation of the spectral density.

Recent contributions in the literature of statistical inference on spatial (or random field) models include Jenish and Prucha (2009, 2012), Machkouri (2011), and Machkouri et al. (2013) which investigate limit theorems for the statistical inference on spatial process observed on (irregularly spaced) lattice. In the literature on semi-parametric spatial (or spatio-temporal) regression models, we mention Gao, Lu and Tjøstheim (2006), Lu et al. (2009), Yan et al. (2014) and Al-Sulami et al. (2017) as recent key references. We can also find an overview for recent developments on semi-parametric spatial models in Robinson (2008). Robinson (2011) and Jenish (2012) study nonparametric inference on spatial regression models under a dependence structure which is different from our mixing-type conditions. They derive central limit theorems of mean functions and the former discusses an application of the results to spatial data observed on lattice. We also refer to Hallin et al. (2004), Machkouri and Stoica (2008), Hallin et al. (2009), Li (2016) and Machkouri et al. (2017) which study nonparametric inference and estimation on mean function of spatial regression models based on random fields on lattice. However, those papers do not derive limit theorems of variance functions.

The goal of this paper is to derive multivariate central limit theorems of the mean and variance function of the model (1.1). From a technical point of view, we cannot use small-block and large-block argument due to Bernstein (1926) which is a well known tool for nonparametric inference for regularly observed time series data since we work with DEI sampling scheme. Although we can apply the blocking argument for regularly spaced data, there is no practical guidance for constructing small and large blocks under the asymptotic framework that the distance between observations goes to 0. Therefore, to avoid the problem, we use another approach due to Bolthausen (1982)

which is based on the convergence of characteristic functions of the estimators. As a result, this paper contributes to the literature on nonparametric inference for spatial regression models, and to the best of our knowledge, this is the first paper to derive limit theorems for the mean and variance functions of the model (

1.1) under the DEI asymptotics.

The rest of the paper is organized as follows. In Section 2, we give conditions to derive limit theorems given in this paper. In Section 3, we give multivariate central limit theorems of the mean and variance functions and propose a method to construct confidence bands for the estimators of those functions on finite intervals included in R. We also propose a data-driven method for bandwidth selection and report simulation results to study finite sample performance of the central limit theorems and proposed confidence bands in Section 4. All proofs are collected in Appendix A.

In this section we summarize assumptions used in the proof of limit theorems given in Section 3 for the sake of convenience.

(A1): Assumption on spatial process

(A2): Assumption on bandwidths and sampling scheme

(A3): Assumption on kernel function

(A4): Assumption on regression models

The random field {Y(sj),X(sj)} is called strongly mixing if the condition (2.1) holds with ψ≡1. The same or similar conditions are used in Hallin et al. (2004), and Lu and Tjøstheim (2014). The condition can be seen as an extension of strong mixing conditions for continuous-time stochastic processes and time series models. It is known that many stochastic processes and (nonlinear) time series models are strongly mixing. The conditions (2.1) and (iii) in Assumption (A1) are satisfied by many spatial processes. We refer to Rosenblatt (1985) and Guyon (1987) for detailed discussion on strong mixing conditions for random fields.

3. Multivariate central limit theorems of the mean and variance functions

In this section we give central limit theorem of the marginal density, mean, and variance functions of the nonparametric spatial regression model (1.1).

The estimator ˆμ∗bn(x) is a jackknife version of ˆμbn(x). Although, from a theoretical point of view, it is sufficient to assume μ∈C2(Iϵ) in Assumption (A4) (ii) to derive limit theorems on μ, we use this estimator instead of ˆμbn(x) in the definition of ˆσ2hn(x) to ignore the effects of its asymptotic bias and for the improvement of its finite sample performance. In fact, under Assumption (A3) and (A4) (four-times continuous differentiability of μ on Iϵ), we can show that ˆμbn(x)−μ(x)=OP(b2n) and ˆμ∗bn(x)−μ(x)=OP(b4n) for each x∈R.

Now we give limit theorems for μ and σ. First we give a multivariate extension of Theorem 1 in Lu and Tjøstheim (2014).

where IN is the N×Nidentity matrix.

Next we give a general limit theorem for nonparametric spatial regression models. The following theorem are used to prove multivariate central limit theorems of ˆμbn and ˆσ2hn.

Assume that G and H are functions such that

By using Proposition 3.2, we can finally derive the following two theorems.

The mixing condition could be relaxed to a more general near epoch dependence (at least for random fields observed at (irregularly spaced) lattice points). For example, we refer to

Röllin (2011)) to the solution of Stein’ s partial deferential equation, Stein’s leave-one(-block)-out method (Stein (1986)) and other analytical techniques (e.g. see Zhang and Wu (2017) and Zhang and Cheng (2017) under different physical dependence, and Chernozhukov, Chetverikov and Kato (2013) under β-mixing sequences). If we work with domain-expanding but not infill asymptotics (limn→∞Δn=∞ and liminfn→∞δn>0), we would able to relax our mixing condition and also provide a method to construct (asymptotically) uniform confidence bands as results of high-dimensional extensions of our theorems to the case that number of design points in an interval increases as the sample size n goes to infinity (i.e. xj∈I,j=1,…,N, N=Nn→∞ as n→∞) by using techniques in those papers (see Kurisu (2018) for time series case). However, if we work with DEI asymptotics, to achieve such results would need careful treatment of the dependence among observations and the author believes that it requires substantial work.

Based on the multivariate central limit theorems in the previous section, we propose a method to construct confidence bands for mean and variance functions on a finite interval I included in R. We estimate V4 by

In this section we present simulation results to see the finite-sample performance of the central limit theorems and proposed confidence bands in Section 3.

where Zℓ,m are independent and identically distributed standard normal random variables, aℓ,m is the (ℓ+2,m+2)-component of the matrix

Now we discuss bandwidth selection for the construction of confidence bands on a finite interval I. Let I be a finite interval, x1<⋯<xJ be design points with xj∈I for j=1,…,J, and let 0<b1<⋯<bL and 0<h1<⋯<hL be grids of bandwidths. We use a data-driven method which is similar to that proposed in Kurisu (2018)

. From a theoretical point of view, we have to choose bandwidths that are of smaller order than the optimal rate for estimation under the loss functions (or a “discretized version” of

In practice, it is also recommended to make use of visual information on how max1≤j≤J|ˆμbℓ(xj)−ˆμbℓ−1(xj)| and max1≤j≤J|ˆσ2hℓ(xj)−ˆσ2hℓ−1(xj)| behave as ℓ increases when determining the bandwidth.

(right). The red line is the density of a standard normal distribution. The number of Monte Carlo iteration is 250 for each case. From these figures we can find the central limit theorems for each design point (Theorems

We also investigated finite sample properties of ˆμbn and ˆμ∗bn for different sample sizes. Figure 7 depicts five realizations of the loss functions max1≤j≤J|ˆμbn(xj)−μ(xj)| (black line) and max1≤j≤J|ˆμ∗bn(xj)−μ(xj)|(red line) with different bandwidth values. We set n=750(left), 1000(center) and 1250(right), and xj=−0.5+(j−1)×0.1, j=1,…,11. We can find that red lines tend to be located below black lines. This implies that ˆμ∗bn tends to have small bias compared with ˆμbn as the sample size increases.

This work is partially supported by Grant-in-Aid for Research Activity Start-up (18H05679) from the JSPS.

We already have pointwise central limit theorem of ˆf(x) by Theorem 1 in Lu and Tjøstheim (2014). Then a multivariate central limit theorem also holds true by Cramér-Wald device. Therefore, it suffices to show the asymptotic independence of estimators at different design points. For this, it is sufficient to show that covariances between estimators at different design points are asymptotically negligible. For x1<x2, we have that

For Vn,1, by the assumption on K and a change of variables, we have that

Let i=√−1. For the proof of the central limit theorem, it is sufficient to show the following conditions by Lemma 2 in Bolthausen (1982).

The condition (a) immediately follows from the definition of Un, since by a change of variables and the dominated convergence theorem, we have that

We show the case when j=ℓ in the first result. The other case can be shown in the same way. If j=ℓ, as n→∞, we have that

Therefore, we complete the proof. ∎