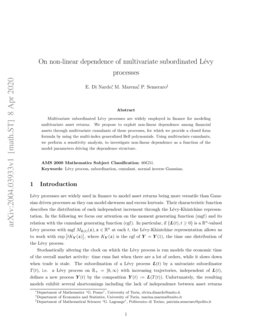 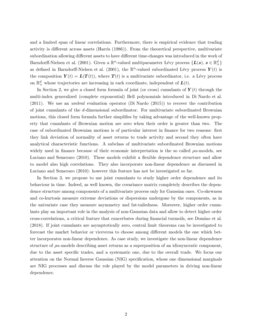 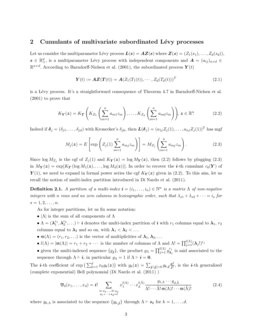 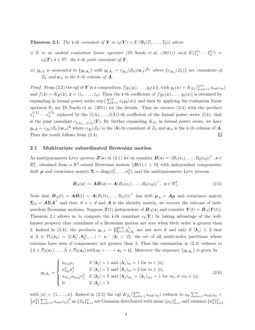 In the field of finance, insurance, and system reliability, etc., it is ...
Lu Lu, et al. ∙

The basic goal of computer engineering is the analysis of data. Such dat...
Krzysztof Domino, et al. ∙

In this paper we devise a statistical method for tracking and modeling c...
Miguel de Carvalho, et al. ∙

A general framework for uncertainty quantification under non-Gaussian input dependencies

Lévy processes are widely used in finance to model asset returns being more versatile than Gaussian driven processes as they can model skewness and excess kurtosis. Their characteristic function describes the distribution of each independent increment through the Lévy-Khintchine representation. In the following we focus our attention on the moment generating function (mgf) and its relation with the cumulant generating function (cgf). In particular, if

{L(t),t≥0} is a Rn-valued Lévy process with mgf ML(t)(z),z∈Rn at each t, the Lévy-Khintchine representation allows us to work with exp[tKY(z)], where KY(z) is the cgf of Y=Y(1), the time one distribution of the Lévy process.

Stochastically altering the clock on which the Lévy process is run models the economic time of the overall market activity: time runs fast when there are a lot of orders, while it slows down when trade is stale. The subordination of a Lévy process L(t) by a univariate subordinator T(t), i.e. a Lévy process on R+=[0,∞) with increasing trajectories, independent of L(t), defines a new process Y(t) by the composition Y(t):=L(T(t)). Unfortunately, the resulting models exhibit several shortcomings including the lack of independence between asset returns and a limited span of linear correlations. Furthermore, there is empirical evidence that trading activity is different across assets (Harris (1986)). From the theoretical perspective, multivariate subordination allowing different assets to have different time-changes was introduced in the work of Barndorff-Nielsen et al. (2001). Given a Rn-valued multiparameter Lévy process {L(s),s∈Rd+} as defined in Barndorff-Nielsen et al. (2001), the Rn-valued subordinated Lévy process Y(t) is the composition Y(t)=L(T(t)), where T(t) is a multivariate subordinator, i.e. a Lévy process on Rd+ whose trajectories are increasing in each coordinate, independent of L(t).

In Section 2, we give a closed form formula of joint (or cross) cumulants of Y(t) through the multi-index generalized (complete exponential) Bell polynomials introduced in Di Nardo et al. (2011). We use an umbral evaluation operator (Di Nardo (2015)) to recover the contribution of joint cumulants of the d-dimensional subordinator. For multivariate subordinated Brownian motions, this closed form formula further simplifies by taking advantage of the well-known property that cumulants of Brownian motion are zero when their order is greater than two. The case of subordinated Brownian motions is of particular interest in finance for two reasons: first they link deviation of normality of asset returns to trade activity and second they often have analytical characteristic functions. A subclass of multivariate subordinated Brownian motions widely used in finance because of their economic interpretation is the so called ρα-models, see Luciano and Semeraro (2010). These models exhibit a flexible dependence structure and allow to model also high correlations. They also incorporate non-linear dependence as discussed in Luciano and Semeraro (2010): however this feature has not be investigated so far.

In Section 3, we propose to use joint cumulants to study higher order dependence and its behaviour in time. Indeed, as well known, the covariance matrix completely describes the dependence structure among components of a multivariate process only for Gaussian ones. Co-skewness and co-kurtosis measure extreme deviations or dispersions undergone by the components, as in the univariate case they measure asymmetry and fat-tailedness. Moreover, higher order cumulants play an important role in the analysis of non-Gaussian data and allow to detect higher order cross-correlations, a critical feature that exacerbates during financial turmoils, see Domino et al. (2018)

ρα-models describing asset returns as a superposition of an idiosyncratic component, due to the asset specific trades, and a systematic one, due to the overall trade. We focus our attention on the Normal Inverse Gaussian (NIG) specification, whose one dimensional marginals are NIG processes and discuss the role played by the model parameters in driving non-linear dependence.

is a Lévy process. It’s a straightforward consequence of Theorem 4.7 in Barndorff-Nielsen et al. (2001) to prove that

A partition of a multi-index i=(i1,…,in)∈Nn is a matrix Λ of non-negative integers with n rows and no zero columns in lexicographic order, such that λs1+λs2+⋯=is for s=1,2,…,n.

is the vector of multiplicities of

is the identity matrix, we recover the subcase of independent Brownian motions. Suppose

are Gaussian distributed with mean

In this section, we consider a class of processes used in finance to model asset returns: the ρα-models. Jevtić et al. (2018) proved that they belong to the class of multivariate subordinated Brownian motions (2.5), by properly choosing the matrix A and the subordinator T(t).

where Xj(t) and Z(t) are independent subordinators, independent of B(t) and Bρ(t). If ρ=0, the process Y(t) is said an α-model. As YI has independent margins, from the additivity property of cumulants, we have KY(z)=KYI(z)+KYρ(z)=∑nj=1gj(z)+f(z), where

where cl(Λ)(Xj) and cl(Λ)(Z) are the l(Λ)-th cumulants of Xj and Z respectively, {gj,λs} and {~gλs} are the coefficients of the inner power series of KXj and KZ respectively, as given in (2.9). To discuss non-linear dependence for the bivariate case in Section 3, we consider the normalized cumulants

as a function of the time scale. For i+j≤4 it’s straightforward to get

where bi,j,di,j and ei,j are functions of the marginal parameters (μi,σi,αi). Cumulants of Y(t) increase linearly in t so that co-skewness measures are proportional to 1/√t, while co-kurtosis measures are proportional to 1/t, converging to Gaussian values asymptotically. Notice that a is a scale parameter for all cross-cumulants, driving the general level of dependence, both linear and non-linear. Furthermore, the Brownian motion correlation ρ12, providing an extra-term in (2.13), affects non only asset correlation measured by ¯c1,1(t), but also non-linear dependence measured by the other cross-cumulants. Thus the ρα-models not only span a wider range of linear dependence compared to the α-models, but they can also incorporate higher non-linear dependencies.

To show the role played by cumulants in analyzing non-linear dependence over time, let us consider a bivariate price process {S(t),t≥0} such that S(t)=S(0)exp(dt+Y(t)), where d∈R2 is the drift term, not affecting the dependence structure, and Y(t)

N(0,Σ) where Σ is the constant covariance matrix of the process (see Jammalamadaka et al. (2004)). This analysis is performed considering the NIG specification of the ρα-model.

Recall that a NIG process Y(t) has no Gaussian component, is of infinite variation and can be constructed by subordination as Y(t)=βδT(t)+δ2B(T(t)), where T∼IG(1,δ√γ2−β2) is independent of the standard Brownian motion B(t). In particular the time one distribution Y(1) has a NIG distribution NIG(γ,δ,β) with parameters γ>0,|β|<γ and δ>0.

In this section, we use the cross-cumulants (2.13) to study the evolution in time of non-linear dependence in a bivariate ρα-NIG model as a function of the common parameters ρand a. In fact, dependence is driven by the common subordinator Z representing the systematic component in two ways: first, through the common parameter a which defines the distribution of the common time change; second, through the action of the Brownian motions’ correlation ρ on Z. The reference parameter set is given in Jevtić et al. (2018) to which we refer for further details111The ρα-NIG specification has been calibrated by the generalized method of moments (GMM) to a bivariate basket composed by Goldman Sachs and Morgan Stanley US daily logreturns from January 3, 2011 to December 31st, 2015. Marginal parameters are: γ1=85.4175,γ2=64.2544,δ1=0.0248,δ2=0.0335,β1=−8.8886,δ2=−13.5988. The marginal drifts not involved in the dependence structure are d1=0.0027 and d2=0.0074. We plot the normalized cumulants ¯ci,j(t) in (2.12) up to the fourth order as a function of the Brownian correlation ρ. We consider two scenarios corresponding to different values of the scaling parameter a. Since a∈(0,2.1) and the limit value a=0 corresponds to independence, we choose the intermediate value a=1.05 and the higher boundary value a=2.1. For each scenario, we plot the evolution of cross-cumulants for three levels of time to maturity. Comparing the two scenarios, it is evident that a drives both linear and non-linear dependence and it allows to reach maximal correlation. Nevertheless, also in the first scenario, where the maximal attainable asset correlation is 0.5, moving ρ, we are able to incorporate non-linear dependence. The evolution in time confirms that higher order cumulants go to zero according to the rates in equation (2.13).

Cumulants are a powerful tool to measure non-linear dependence. We take advantage of the Lévy-Kinthchin representation of multiparameter subordinated Lévy processes to find their cumulants in closed form. We use them to study non-linear dependence captured by some class of processes widely used in finance to model asset returns. Indeed higher order statistics and suitable tests of hypotheses have been employed aiming to identify nonlinear processes Masson (2001)

Di Nardo (2015), and thus estimates of parameters can be recovered by an analogous of GMM. This is in the agenda of our future research.