We discuss different cases of dissipative Hamiltonian differential-algebraic equations and the linear algebraic systems that arise in their linearization or discretization. For each case we give examples from practical applications. An important feature of the linear algebraic systems is that the (non-Hermitian) system matrix has a positive definite or semidefinite Hermitian part. In the positive definite case we can solve the linear algebraic systems iteratively by Krylov subspace methods based on efficient three-term recurrences. We illustrate the performance of these iterative methods on several examples. The semidefinite case can be challenging and requires additional techniques to deal with "singular part", while the "positive definite part" can still be treated with the three-term recurrence methods. 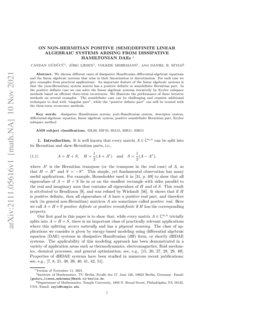 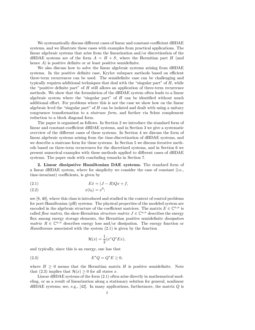 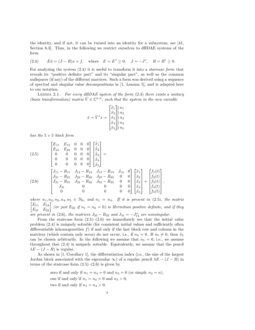 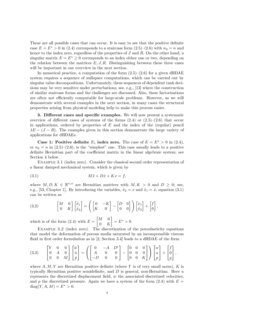 Numerical Method for a Class of Algebraic Riccati Equations

We consider a symmetric matrix, the entries of which depend linearly on ...
Milan Hladík, et al. ∙

Local and global canonical forms for differential-algebraic equations with symmetries

It is well known that every matrix A∈Cn,n

can be split into its Hermitian and skew-Hermitian parts, i.e.,

where A∗ is the Hermitian transpose (or the transpose in the real case) of A, so that H=H∗ and S=−S∗. This simple, yet fundamental observation has many useful applications. For example, Householder used it in [Hou64, p. 69]

to show that all eigenvalues of

A=H+S lie in or on the smallest rectangle with sides parallel to the real and imaginary axes that contains all eigenvalues of H and of S. This result is attributed to Bendixson [Ben1902], and was refined by Wielandt [Wie55]. It shows that if H is positive definite, then all eigenvalues of A have a positive real part, and therefore such (in general non-Hermitian) matrices A are sometimes called positive real. Here we call A=H+S positive definite or positive semidefinite if H has the corresponding property.

Our first goal in this paper is to show that, while every matrix A∈Cn,n trivially splits into A=H+S, there is an important class of practically relevant applications where this splitting occurs naturally and has a physical meaning

. The class of applications we consider is given by energy-based modeling using differential algebraic equation (DAE) systems in dissipative Hamiltonian (dH) form, or shortly dHDAE systems. The applicability of this modeling approach has been demonstrated in a variety of application areas such as thermodynamics, electromagnetics, fluid mechanics, chemical processes, and general optimization; see, e.g.,

We systematically discuss different cases of linear and constant-coefficient dHDAE systems, and we illustrate these cases with examples from practical applications. The linear algebraic systems that arise from the linearization and/or discretization of the dHDAE systems are of the form A=H+S, where the Hermitian part H (and hence A) is positive definite or at least positive semidefinite.

We also discuss how to solve the linear algebraic systems arising from dHDAE systems. In the positive definite case, Krylov subspace methods based on efficient three-term recurrences can be used. The semidefinite case can be challenging and typically requires additional techniques that deal with the “singular part” of H, while the “positive definite part” of H still allows an application of three-term recurrence methods. We show that the formulation of the dHDAE system often leads to a linear algebraic system where the “singular part” of H can be identified without much additional effort. For problems where this is not the case we show how on the linear algebraic level the “singular part” of H can be isolated and dealt with using a unitary congruence transformation to a staircase form, and further via Schur complement reduction to a block diagonal form.

The standard form of a linear dHDAE system, where for simplicity we consider the case of constant (i.e., time-invariant) coefficients, is given by

see [BeaMXZ18, MehMW18], where this class is introduced and studied in the context of control problems for port-Hamiltonian (pH) systems. The physical properties of the modeled system are encoded in the algebraic structure of the coefficient matrices. The matrix E∈Cn,n is called flow matrix, the skew-Hermitian structure matrix J∈Cn,n describes the energy flux among energy storage elements, the Hermitian positive semidefinite dissipation matrix R∈Cn,n describes energy loss and/or dissipation. The energy function or Hamiltonian associated with the system (2) is given by the function

and typically, since this is an energy, one has that

where H≥0 means that the Hermitian matrix H is positive semidefinite. Note that (4) implies that H(x)≥0 for all states x.

that reveals its “positive definite part” and its “singular part”, as well as the common nullspaces (if any) of the different matrices. Such a form was derived using a sequence of spectral and singular value decompositions in

[AchAM21, Lemma 5], and is adapted here to our notation. For every dHDAE system of the form (5) there exists a unitary (basis transformation) matrix ~V∈Cn,n, such that the system in the new variable