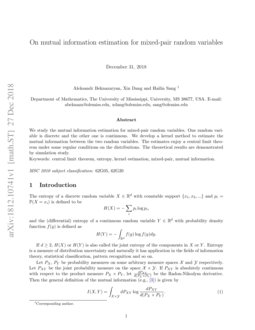 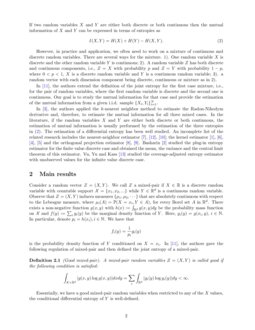 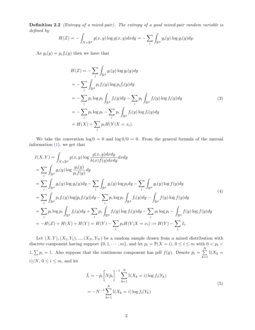 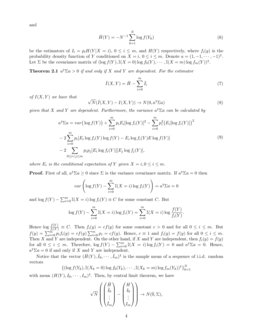 The entropy of a discrete random variable

and the (differential) entropy of a continuous random variable

f(y) is defined as

If d≥2, H(X) or H(Y) is also called the joint entropy of the components in X or Y

. Entropy is a measure of distribution uncertainty and naturally it has application in the fields of information theory, statistical classification, pattern recognition and so on.

Let PX, PY be probability measures on some arbitrary measure spaces X and Y respectively. Let PXY be the joint probability measure on the space X×Y. If PXY is absolutely continuous with respect to the product measure PX×PY, let dPXYd(PX×PY) be the Radon-Nikodym derivative. Then the general definition of the mutual information (e.g., [3]) is given by

is a continuous random variable; 3). a random vector with each dimension component being discrete, continuous or mixture as in 2).

In [11], the authors extend the definition of the joint entropy for the first case mixture, i.e., for the pair of random variables, where the first random variable is discrete and the second one is continuous. Our goal is to study the mutual information for that case and provide the estimation of the mutual information from a given i.i.d. sample {Xi,Yi}Ni=1.

In [3], the authors applied the k-nearest neighbor method to estimate the Radon-Nikodym derivative and, therefore, to estimate the mutual information for all three mixed cases. In the literature, if the random variables X and Y are either both discrete or both continuous, the estimation of mutual information is usually performed by the estimation of the three entropies in (2). The estimation of a differential entropy has been well studied. An incomplete list of the related research includes the nearest-neighbor estimator [7], [12], [10]; the kernel estimator [1], [6], [4], [5] and the orthogonal projection estimator [8], [9]. Basharin [2]

studied the plug-in entropy estimator for the finite value discrete case and obtained the mean, the variance and the central limit theorem of this estimator. Vu, Yu and Kass

Consider a random vector Z=(X,Y). We call Z a mixed-pair if X∈R is a discrete random variable with countable support X={x1,x2,...} while Y∈Rd is a continuous random variable. Observe that Z=(X,Y) induces measures {μ1,μ2,⋯} that are absolutely continuous with respect to the Lebesgue measure, where μi(A)=P(X=xi,Y∈A), for every Borel set A in Rd. There exists a non-negative function g(x,y) with h(x):=∫Rdg(x,y)dy be the probability mass function on X and f(y):=∑igi(y) be the marginal density function of Y. Here, gi(y)=g(xi,y), i∈N. In particular, denote pi=h(xi),i∈N. We have that

is the probability density function of Y conditioned on X=xi. In [11], the authors gave the following regulation of mixed-pair and then defined the joint entropy of a mixed-pair.

(Good mixed-pair). A mixed-pair random variables Z=(X,Y) is called good if the following condition is satisfied:

Essentially, we have a good mixed-pair random variables when restricted to any of the X values, the conditional differential entropy of Y is well-defined.

As gi(y)=pifi(y) then we have that

We take the convention log0=0 and log0/0=0. From the general formula of the mutual information (1), we get that

a⊺Σa>0 if and only if X and Y are dependent. For the estimator

given that X and Y are dependent. Furthermore, the variance a⊺Σa can be calculated by

where Ei is the conditional expectation of Y given X=i,0≤i≤m.

Proof. First of all, a⊺Σa≥0 since Σ is the variance covariance matrix. If a⊺Σa=0 then

and logf(Y)−∑mi=0I(X=i)logfi(Y)≡C for some constant C. But

Notice that the vector (¯H(Y),¯I0,⋯,¯Im)⊺ is the sample mean of a sequence of i.i.d. random vectors

and, given a⊺Σa>0, we have (8). By the formula for variance decomposition, we have

0≤i≤m. Here vari is the conditional variance of Y when X=i,0≤i≤m. By similar calculation,

We consider the case when the random variables X and Y are dependent. Note that in this case a⊺Σa>0 and we have (8). However, ¯I(X,Y) is not a practical estimator since the density functions involved are not known.

Now let K(⋅) be a kernel function in Rd and let h be the bandwidth. Then

are the “leave-one-out” estimators of the functions fi, 0≤i≤m, and

is an estimator of H(Y), where

We may take the probability density function of Student-t

distribution with proper degree of freedom instead of the normal density function as the kernel function. On the other hand, if

The second row of Table 1 lists the mathematica calculation of the mutual information (MI) as stated in (4) for each case. The third row of Table 1 gives the average of 400 estimates based on formula (16). For each estimate, we use the probability density function of the Student t distribution with degree of freedom 3, i.e. t(3,0,1), as the kernel function. We also have simulation study with kernel functions satisfying the conditions in the main results and obtained similar results. We take h=N−1/5 as the bandwidth for the first three cases and h=N−1/5/24 for the last case. The data size for each estimate is N=50,000 in each case. The Pareto distributions pareto(1,2) and pareto(1,10) have very dense area on the right of 1. This is the reason that we take a relatively small bandwidth for this case. To apply the kernel method in estimation, one should select an optimal bandwidth based on some criteria, for example, to minimize the mean squared error. It is interesting to investigate the bandwidth selection problem from both theoretical and application viewpoints. However, it seems that the study in this direction is very difficult. We leave it as an open question for future study. It is clear that the average of the estimates matches the true value of mutual information.

We apply mathematica to calculate the covariance matrix Σ of

Figure 1 and 2 show the histograms with kernel density fits and normal Q-Q plots of 400 estimates for each case. It is clear that the values of ^I(X,Y)

is the identity matrix. For each case,

p0=0.3 for the first distribution and p1=0.7 for the second distribution. Table 2 summarizes 200 estimates of the mutual information with h=N−1/5 and sample size N=50,000 for each estimate. We take t3(0,I) as the kernel function. Same as the one dimensional case, we apply mathematica to calculate the true value of MI and (a⊺Σa/N)1/2 which is given in formula (9). Figure 3 shows the histograms with kernel density fits and normal Q-Q plots of 200 estimates for each example. It is clear that the values of ^I(X,Y) also follow a normal distribution in the two dimensional case. In summary, the simulation study confirms the central limit theorem as stated in (17).

The authors thank the editor and the referees for carefully reading the manuscript and for the suggestions that improved the presentation. This research is supported by the College of Liberal Arts Faculty Grants for Research and Creative Achievement at the University of Mississippi. The research of Hailin Sang is also supported by the Simons Foundation Grant 586789.