On Model Selection with Summary Statistics 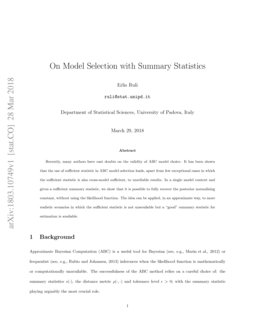 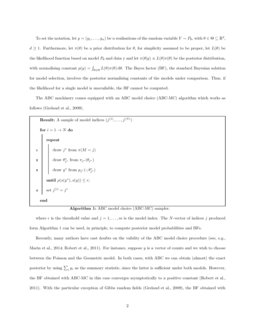 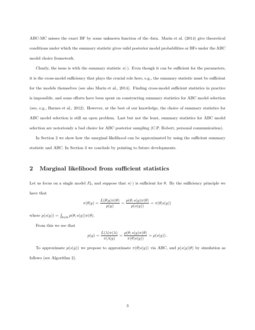 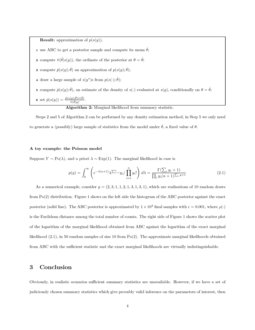 Approximate Bayesian Computation (ABC) is a useful tool for Bayesian (see, e.g., marin2012) or frequentist (see, e.g., rubio2013simple) inferences when the likelihood function is mathematically or computationally unavailable. The successfulness of the ABC method relies on a careful choice of: the summary statistics s(⋅), the distance metric ρ(⋅,⋅) and tolerance level ϵ>0; with the summary statistic playing arguably the most crucial role.

realisations of the random variable

Y∼Pθ, with θ∈Θ⊆Rd, d≥1. Furthermore, let π(θ) be a prior distribution for θ, for simplicity assumed to be proper, let L(θ) be the likelihood function based on model Pθ and data y and let π(θ|y)∝L(θ)π(θ) be the posterior distribution, with normalising constant p(y)=∫θ∈ΘL(θ)π(θ)dθ

. The Bayes factor (BF), the standard Bayesian solution for model selection, involves the posterior normalising constants of the models under comparison. Thus, if the likelihood for a single model is unavailable, the BF cannot be computed.

where ϵ is the threshold value and j=1,…,m is the model index. The N

can be used, in principle, to compute posterior model probabilities and BFs.

Recently, many authors have cast doubts on the validity of the ABC model choice procedure (see, e.g., marin2014relevant; robert2011lack). For instance, suppose y is a vector of counts and we wish to choose between the Poisson and the Geometric model. In both cases, with ABC we can obtain (almost) the exact posterior by using ∑iyi as the summary statistic, since the latter is sufficient under both models. However, the BF obtained with ABC-MC in this case converges asymptotically to a positive constant (robert2011lack). With the particular exception of Gibbs random fields (grelaud2009abc), the BF obtained with ABC-MC misses the exact BF by some unknown function of the data. marin2014relevant give theoretical conditions under which the summary statistic gives valid posterior model probabilities or BFs under the ABC model choice framework.

In Section 2 we show how the marginal likelihood can be approximated by using the sufficient summary statistic and ABC. In Section 3 we conclude by pointing to future developments.

Let us focus on a single model Pθ, and suppose that s(⋅) is sufficient for θ. By the sufficiency principle we have that

From this we see that

To approximate p(y) we propose to approximate π(θ|s(y)) via ABC, and L(θ;y) by simulation as follows (see Algorithm 2).

Steps 2 and 4 of Algorithm 2 can be performed by any density estimation method; in Step 5 we only need to generate a (possibly) large sample of data from the model under ^θ, a fixed value of θ.

A toy example: the Poisson model Suppose Y∼Po(λ), and a priori λ∼Exp(1). The marginal likelihood in case is

As a numerical example, consider y=(2,3,1,1,2,1,3,1,3,1), which are realisations of 10 random draws from Po(2) distribution. Figure 1 shows on the left side the histogram of the ABC posterior against the exact posterior (solid line). The ABC posterior is approximated by 1×104 final samples with ϵ=0.001, where ρ(⋅) is the Euclidean distance among the total number of counts.