This paper is concerned with the small area estimation in the multivariate Fay-Herriot model where covariance matrix of random effects are fully unknown. The covariance matrix is estimated by a Prasad-Rao type consistent estimator, and the empirical best linear un- biased predictor (EBLUP) of a vector of small area characteristics is provided. When the EBLUP is measured in terms of a mean squared error matrix (MSEM), a second-order approximation of MSEM of the EBLUP and a second-order unbiased estimator of the MSEM is derived analytically in closed forms. The performance is investigated through numerical and empirical studies. 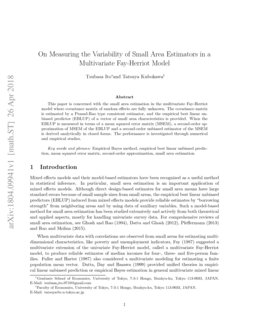 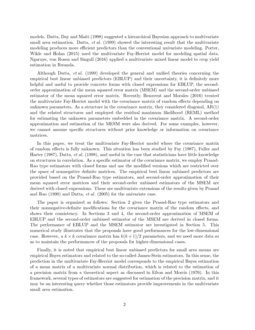 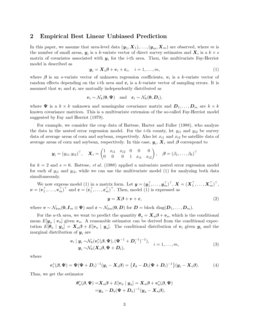 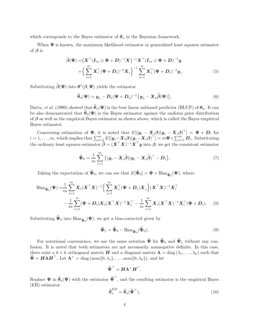 Multi-Goal Prior Selection: A Way to Reconcile Bayesian and Classical Approaches for Random Effects Models

Mixed effects models and their model-based estimators have been recognized as a useful method in statistical inference. In particular, small area estimation is an important application of mixed effects models. Although direct design-based estimates for small area means have large standard errors because of small sample sizes from small areas, the empirical best linear unbiased predictors (EBLUP) induced from mixed effects models provide reliable estimates by “borrowing strength” from neighboring areas and by using data of auxiliary variables. Such a model-based method for small area estimation has been studied extensively and actively from both theoretical and applied aspects, mostly for handling univariate survey data. For comprehensive reviews of small area estimation, see Ghosh and Rao (1994), Datta and Ghosh (2012), Pfeffermann (2013) and Rao and Molina (2015).

Although Datta, etal. (1999) developed the general and unified theories concerning the empirical best linear unbiased predictors (EBLUP) and their uncertainty, it is definitely more helpful and useful to provide concrete forms with closed expressions for EBLUP, the second-order approximation of the mean squared error matrix (MSEM) and the second-order unbiased estimator of the mean squared error matrix. Recently, Benavent and Morales (2016) treated the multivariate Fay-Herriot model with the covariance matrix of random effects depending on unknown parameters. As a structure in the covariance matrix, they considered diagonal, AR(1) and the related structures and employed the residual maximum likelihood (REML) method for estimating the unknown parameters embedded in the covariance matrix. A second-order approximation and estimation of the MESM were also derived. For some examples, however, we cannot assume specific structures without prior knowledge or information on covariance matrices.

In this paper, we treat the multivariate Fay-Herriot model where the covariance matrix of random effects is fully unknown. This situation has been studied by Fay (1987), Fuller and Harter (1987), Datta, etal. (1998), and useful in the case that statisticians have little knowledge on structures in correlation. As a specific estimator of the covariance matrix, we employ Prasad-Rao type estimators with closed forms and use the modified versions which are restricted over the space of nonnegative definite matrices. The empirical best linear unbiased predictors are provided based on the Prasad-Rao type estimators, and second-order approximation of their mean squared error matrices and their second-order unbiased estimators of the MSEM are derived with closed expressions. These are multivariate extensions of the results given by Prasad and Rao (1990) and Datta, etal. (2005) for the univariate case.

The paper is organized as follows: Section 2 gives the Prasad-Rao type estimators and their nonnegative-definite modifications for the covariance matrix of the random effects, and shows their consistency. In Sections 3 and 4, the second-order approximation of MSEM of EBLUP and the second-order unbiased estimator of the MSEM are derived in closed forms. The performance of EBLUP and the MSEM estimator are investigated in Section 5. This numerical study illustrates that the proposals have good performances for the low-dimensional case. However, a k×k covariance matrix has k(k+1)/2 parameters, and we need more data so as to maintain the performances of the proposals for higher-dimensional cases.

Finally, it is noted that empirical best linear unbiased predictors for small area means are empirical Bayes estimators and related to the so-called James-Stein estimators. In this sense, the prediction in the multivariate Fay-Herriot model corresponds to the empirical Bayes estimation of a mean matrix of a multivariate normal distribution, which is related to the estimation of a precision matrix from a theoretical aspect as discussed in Efron and Morris (1976). In this framework, several types of estimators are suggested for estimation of the precision matrix, and it may be an interesting query whether those estimators provide improvements in the multivariate small area estimation.

In this paper, we assume that area-level data (\boldmathy1,\boldmathX1),…,(\boldmath% ym,\boldmathXm) are observed, where m is the number of small areas, \boldmathyi is a k-variate vector of direct survey estimates and \boldmathXi is a k×s matrix of covariates associated with \boldmathyi for the i-th area. Then, the multivariate Fay-Herriot model is described as

where Ψ is a k×k unknown and nonsingular covariance matrix and \boldmathD1,…,\boldmathDm are k×k known covariance matrices. This is a multivariate extension of the so-called Fay-Herriot model suggested by Fay and Herriot (1979).

for k=2 and s=6. Battese, etal. (1988) applied a univariate nested error regression model for each of yi1 and yi2, while we can use the multivariate model (1) for analyzing both data simultaneously.

Thus, we get the estimator

which corresponds to the Bayes estimator of \boldmathθa in the Bayesian framework.

When Ψ is known, the maximum likelihood estimator or generalized least squares estimator of β is

Substituting ˆ\boldmathΨ0 into Biasˆ\boldmathΨ0(\boldmathΨ), we get a bias-corrected given by

For notational convenience, we use the same notation ˆ\boldmathΨ for ˆ\boldmathΨ0 and ˆ\boldmathΨ1 without any confusion. It is noted that both estimators are not necessarily nonnegative definite. In this case, there exist a k×korthogonal matrix H and a diagonal matrix \boldmathΛ=diag(λ1,…,λk) such that ˆ\boldmathΨ=\boldmathH\boldmathΛ\boldmathH⊤. Let \boldmathΛ+=diag(max{0,λ1},…,max{0,λk}), and let

Replace Ψ in ˆ\boldmathθa(\boldmathΨ) with the estimator ˆ\boldmathΨ+, and the resulting estimator is the empirical Bayes (EB) estimator

To guarantee asymptotic properties of ˆ\boldmathΨ+, we assume the following conditions:

(3) The nonnegative defnite matrix ˆ\boldmathΨ+ is consistent for large m, and P(ˆ\boldmathΨ+≠ˆ\boldmathΨ)=O(m−K) for any K.

Proof.  We begin with writing ˆ\boldmathΨ0−\boldmathΨ as

For (2), it is noted that ˆ\boldmathΨ−\boldmathΨ is approximated as

First, I1 is written as

Note that λj>0. It follows from the Markov inequality that for any K>0,

This implies that ˆ\boldmathβ(\boldmathΨ) is independent of \boldmathy−\boldmathX˜\boldmathβ or ˆ\boldmathΨ. It is also noted that