On Mean Estimation for General Norms with Statistical Queries

We study the problem of mean estimation for high-dimensional distributions, assuming access to a statistical query oracle for the distribution. For a normed space X = (R^d, ·_X) and a distribution supported on vectors x ∈R^d with x_X≤ 1, the task is to output an estimate μ̂∈R^d which is ϵ-close in the distance induced by ·_X to the true mean of the distribution. We obtain sharp upper and lower bounds for the statistical query complexity of this problem when the the underlying norm is symmetric as well as for Schatten-p norms, answering two questions raised by Feldman, Guzmán, and Vempala (SODA 2017). 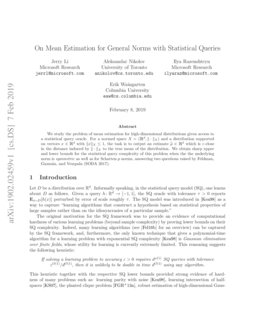 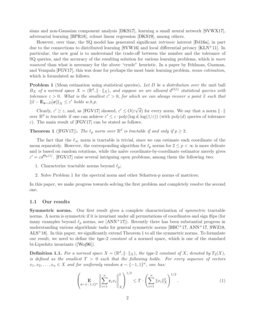 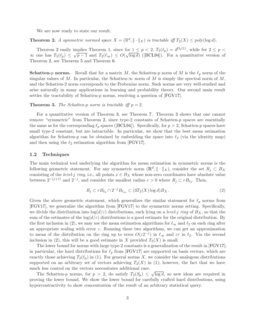 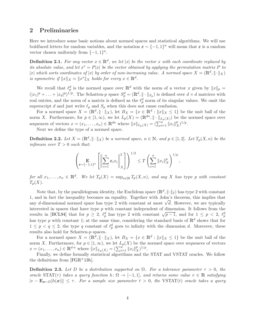 Let D be a distribution over Rd. Informally speaking, in the statistical query model (SQ), one learns about D as follows. Given a query h:Rd→[−1,1], the SQ oracle with tolerance τ>0 reports \Exx∼D[h(x)] perturbed by error of scale roughly τ. The SQ model was introduced in [Kea98] as a way to capture “learning algorithms that construct a hypothesis based on statistical properties of large samples rather than on the idiosyncrasies of a particular sample.”

The original motivation for the SQ framework was to provide an evidence of computational hardness of various learning problems (beyond sample complexity) by proving lower bounds on their SQ complexity. Indeed, many learning algorithms (see [Fel16b] for an overview) can be captured by the SQ framework, and, furthermore, the only known technique that gives a polynomial-time algorithm for a learning problem with exponential SQ complexity [Kea98] is Gaussian elimination over finite fields

, whose utility for learning is currently extremely limited. This reasoning suggests the following heuristic:

If solving a learning problem to accuracy ε>0 requires dω(1) SQ queries with tolerance εO(1)/dO(1), then it is unlikely to be doable in time dO(1) using any algorithm.

This heuristic together with the respective SQ lower bounds provided strong evidence of hardness of many problems such as: learning parity with noise [Kea98], learning intersection of half-spaces [KS07], the planted clique problem [FGR+13a], robust estimation of high-dimensional Gaussians and non-Gaussian component analysis [DKS17]

However, over time, the SQ model has generated significant intrinsic interest [Fel16a], in part due to the connections to distributed learning [SVW16] and local differential privacy [KLN+11]. In particular, the new goal is to understand the trade-off between the number and the tolerance of SQ queries, and the accuracy of the resulting solution for various learning problems, which is more nuanced than what is necessary for the above “crude” heuristic. In a paper by Feldman, Guzman, and Vempala [FGV17], this was done for perhaps the most basic learning problem, mean estimation, which is formulated as follows.

[Mean estimation using statistical queries] Let D be a distribution over the unit ball BX of a normed space X=(Rd,∥⋅∥X), and suppose we are allowed dO(1) statistical queries with tolerance ε>0. What is the smallest ε′>0, for which we can always recover a point ˆx such that ∥∥ˆx−\Ex\bx∼D[\bx]∥∥X≤ε′ holds w.h.p. Clearly, ε′≥ε, and, as [FGV17] showed, ε′≤O(ε√d) for every norm. We say that a norm ∥⋅∥ over Rd is tractable if one can achieve ε′≤ε⋅poly(logd,log(1/ε)) (with poly(d) queries of tolerance ε). The main result of [FGV17] can be stated as follows. [[FGV17]] The ℓp norm over Rd is tractable if and only if p≥2. The fact that the ℓ∞ norm is tractable is trivial, since we can estimate each coordinate of the mean separately. However, the corresponding algorithm for ℓp norms for 2≤p<∞ is more delicate and is based on random rotations, while the naïve coordinate-by-coordinate estimator merely gives ε′=εdΘp(1). [FGV17] raise several intriguing open problems, among them the following two:

In this paper, we make progress towards solving the first problem and completely resolve the second one.

Our first result gives a complete characterization of symmetric tractable norms. A norm is symmetric if it is invariant under all permutations of coordinates and sign flips (for many examples beyond ℓp norms, see [ANN+17]). Recently there has been substantial progress in understanding various algorithmic tasks for general symmetric norms [BBC+17, ANN+17, SWZ18, ALS+18]. In this paper, we significantly extend Theorem 1 to all the symmetric norms. To formulate our result, we need to define the type-2 constant of a normed space, which is one of the standard bi-Lipschitz invariants ([Woj96]).

Recall that for a matrix M, the Schatten-p norm of M is the ℓp

norm of the singular values of

norm corresponds to the Frobenius norm. Such norms are very well-studied and arise naturally in many applications in learning and probability theory. Our second main result settles the tractability of Schatten-

p norms, resolving a question of [FGV17]. The Schatten-p norm is tractable iff p=2. For a quantitative version of Theorem 1.1, see Theorem 4. Theorem 1.1 shows that one cannot remove “symmetric” from Theorem 1.1, since type-2 constants of Schatten-p spaces are essentially the same as for the corresponding ℓp spaces ([BCL94]). Specifically, for p>2, Schatten-p spaces have small type-2 constant, but are intractable. In particular, we show that the best mean estimation algorithm for Schatten-p can be obtained by embedding the space into ℓ2 (via the identity map) and then using the ℓ2 estimation algorithm from [FGV17].

The main technical tool underlying the algorithm for mean estimation in symmetric norms is the following geometric statement. For any symmetric norm (\Rd,∥⋅∥X), consider the set Rj⊂BX consisting of the level-j ring, i.e., all points x∈BX whose non-zero coordinates have absolute value between 2−(j+1) and 2−j, and consider the smallest radius r>0 where Rj⊂rBℓ2. Then,

Given the above geometric statement, which generalizes the similar statement for ℓp norms from [FGV17], we generalize the algorithm from [FGV17] to the symmetric norms setting. Specifically, we divide the distribution into log(d/\eps) distributions, each lying on a level-j ring of BX, so that the sum of the estimates of the log(d/\eps) distributions is a good estimate for the original distribution. By the first inclusion in (2), we may use the mean estimation algorithms for ℓ∞ and ℓ2 on each ring after an appropriate scaling with error \eps. Running these two algorithms, we can get an approximation to mean of the distribution on the ring up to error O(\eps2−j) in ℓ∞ and \epsr in ℓ2. Via the second inclusion in (2), this will be a good estimate in X provided T2(X) is small.

The lower bound for norms with large type-2 constants is a generalization of the result in [FGV17]; in particular, the hard distributions for ℓp from [FGV17] are supported on basis vectors, which are exactly those achieving T2(ℓp) in (1). For general norms X, we consider the analogous distributions supported on an arbitrary set of vectors achieving T2(X) in (1); however, the fact that we have much less control on the vectors necessitates additional care.

The Schatten-p norms, for p>2, do satisfy T2(Sp)≤√logd, so new ideas are required in proving the lower bound. We show the lower bound for carefully crafted hard distributions, using hypercontractivity to show concentration of the result of an arbitrary statistical query.

Here we introduce some basic notions about normed spaces and statistical algorithms. We will use boldfaced letters for random variables, and the notation

For any vector x∈\Rd, we let |x| be the vector x with each coordinate replaced by its absolute value, and let x∗=P|x| be the vector obtained by applying the permutation matrix P to |x| which sorts coordinates of |x| by order of non-increasing value. A normed space X=(\Rd,∥⋅∥X) is symmetric if ∥x∥X=∥x∗∥X holds for every x∈\Rd.

We recall that ℓdp is the normed space over \Rd with the norm of a vector x given by ∥x∥p=(|x1|p+…+|xd|p)1/p. The Schatten-p space Sdp=(\Rd,∥⋅∥Sp) is defined over d×d matrices with real entries, and the norm of a matrix is defined as the ℓdp norm of its singular values. We omit the superscript d and just write ℓp and Sp when this does not cause confusion.

We call an algorithm that accesses the distribution D only via one of the above oracles a statistical algorithm. Clearly, VSTAT(t) is at least as strong as STAT(1/√t) and no stronger than STAT(1/t). The lower bounds presented will follow the framework of [FPV18]. The discrimination norm κ2(D,\calD) for a distribution D supported on Ω and a set \calD of distributions supported on Ω is given by:

where \bD∼\calD is sampled uniformly at random, and ∥h∥2D=\Ex\by∼D[h(\by)2]. The decision problem \calB(D,\calD) is the problem of distinguishing whether an unknown distribution \bH=D or is sampled uniformly from \calD. The statistical dimension with discrimination norm κ, SDN(\calB(D,\calD),κ), is the largest integer t such that for a finite subset \calDD⊂\calD, any subset \calD′⊂\calDD of size at least |\calDD|/t satisfies κ2(\calD′,D)≤κ.

[Theorem 7.1 in [FPV18]] For κ>0, let t=SDN(\calB(D,\calD),κ) for a distribution D and set of distributions \calD supported on a domain Ω. Any randomized statistical algorithm that solves \calB(D,\calD) with probability at least 2/3 requires t/3 calls to VSTAT(1/(3κ2)).

and let x(j)∈\Rd be the vector given by letting the first |Bj(x)| coordinates be t⋅2−j, and the remaining coordinates be 0. Because X is symmetric with respect to changing the sign of any coordinate of x, the triangle inequality easily implies that ∥x∥X is monotone with respect to |xi| for any i∈[d]. Then, by the triangle inequality and the fact that X is symmetric with ∥e1∥X=1, ∥x∥X≤∑2log(d)j=0∥x(j)∥X+t/d; thus, it remains to bound ∥x(j)∥X for every j∈{0,…,2log(d)}.

With this structural result, we now show: Let X=(\Rd,∥⋅∥) be a symmetric norm with type-2 constant T2(X)∈[1,∞) normalized so ∥e1∥X=1. There exists an algorithm for mean estimation over X making 3dlogd queries to STAT(α), where the accuracy α satisfies

The algorithm proceeds by estimating the mean of each distribution \calDj and then taking the sum of all estimates:

We now give a lower bound for normed spaces which have large type-2 constant.

Let X=(\Rd,∥⋅∥X) be a normed space with type-2 constant T2(X)∈[1,∞). There exists an \eps>0 such that any statistical algorithm for mean estimation in X with error \eps making queries to VSTAT(1/(3κ2)) must make

such queries. The immediate corollary of Theorem 3.2 shows the upper bound from Theorem 3.1 is tight up to poly-logarithmic factors. Let X=(\Rd,∥⋅∥X) be a normed space with type-2 constant T2(X)∈[1,∞). Any algorithm for mean estimation in X making dO(1)-queries to VSTAT(α) must have

We set up some notation and basic observations leading to a proof of Theorem 3.2.

with t2(x)>t/C for an absolute constant C.

We define the sequence x=(x1,…,xn) to contain N copies of each vector xi,j, for some large enough integer N

. By the central limit theorem, as

N→∞, 1√N∑ni=1\bepsixi converges in disribution to ∑mi=1∑mij=1\bgi,jx′i,j. Then, for a large enough N, with probability at least 1/4, we have that ∥∑ni=1\bepsixi∥2X≥(t/C′)⋅∑ni=1∥xi∥2X. The lemma follows with C=4C′, since the left hand side above is always non-negative. ∎

Description of the lower bound instance

In this section we describe the instance which achieves the lower bound in Theorem 3.2.

Consider the distribution \calD on distributions which is uniform over all Dz where z∈{−1,1}n. Then, we have111Here and in the rest of the paper we use A\gsimB to mean that there exists an absolute constant C>0, independent of all other parameters, such that A≥B/C, and, analogously, A\lsimB to mean A≤CB:

where (9) and (10) follow from the Khintchine-Kahane inequalities and the definition of t2(x). By the Payley-Zygmund inequality, \Prx\bz∼{−1,1}n[∥μ\bz∥X≥\eps]=Ω(1), for some \eps=Ω(\eps0). We thus conclude the following lemma, which follows from the preceding discussion. Suppose there exists a statistical algorithm for mean estimation over X with error \eps making q(\eps) queries to VSTAT(α(\eps)), then for distribution D as in (5) and set \calD as in (6), \calB(D,\calD) has a statistical algorithm making q(\eps) queries of accuracy VSTAT(α(\eps)) which succeeds with constant probability.

We now turn to computing the statistical dimension of \calB(D,\calD), as described in Definition 2.

so that by the Hoeffding inequality, any α>0 satisfies