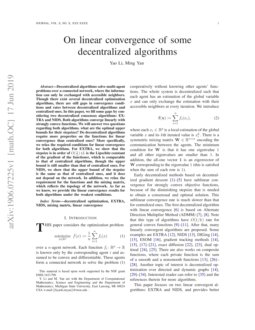 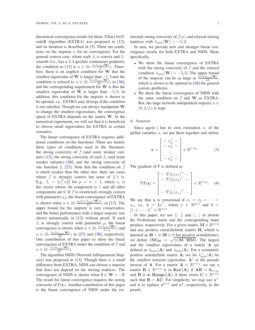 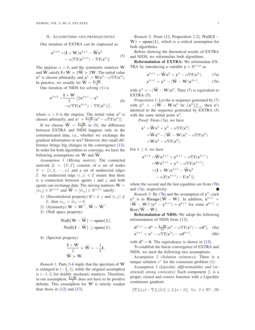 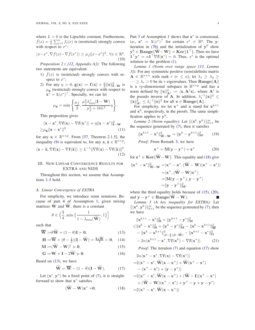 This paper considers the optimization problem

over a n-agent network. Each function fi:Rp→R is known only by the corresponding agent i and assumed to be convex and differentiable. These agents form a connected network to solve the problem (1

) cooperatively without knowing other agents’ functions. The whole system is decentralized such that each agent has an estimation of the global variable

x and can only exchange the estimation with their accessible neighbors at every iteration. We introduce

where each xi∈Rp is a local estimation of the global variable x and its kth iterated value is xki. There is a symmetric mixing matrix W∈Rn×n encoding the communication between the agents. The minimum condition for W

is that it has one eigenvalue

1 and all other eigenvalues are smaller than 1

. In addition, the all-one vector

is an eigenvector of

W corresponding to the eigenvalue 1 (this is satisfied when the sum of each row is 1).

Early decentralized methods based on decentralized gradient descent [1, 2, 3, 4, 5] have sublinear convergence for strongly convex objective functions, because of the diminishing stepsize that is needed to obtain a consensual and optimal solution. This sublinear convergence rate is much slower than that for centralized ones. The first decentralized algorithm with linear convergence [6] is based on Alternate Direction Multiplier Method (ADMM) [7, 8]. Note that this type of algorithms have O(1/k) rate for general convex functions [9, 10, 11]. After that, many linearly convergent algorithms are proposed. Some examples are EXTRA [12], NIDS [13], DIGing [14, 15], ESOM [16], gradient tracking methods [17, 18, 19, 15, 14, 20, 21], exact diffusion [22, 23], dual optimal [24, 25]. There are also works on composite functions, where each private function is the sum of a smooth and a nonsmooth functions [26, 13, 27, 28]. Another topic of interest is decentralized optimization over directed and dynamic graphs [29, 30, 31, 32, 14, 33, 34]. Interested reader can refer to [35] and the references therein for more algorithms.

This paper focuses on two linear convergent algorithms: EXTRA and NIDS, and provides better theoretical convergence results for them. EXact firsT-ordeR Algorithm (EXTRA) was proposed in [12], and its iteration is described in (5). There are conditions on the stepsize α for its convergence. For the general convex case, where each fi is convex and L-smooth (i.e., has a L-Lipschitz continuous gradient), the condition in [12] is α∈(0,1+λmin(W)L). Therefore, there is an implicit condition for W that the smallest eigenvalue of W is larger than −1. Later the condition is relaxed to α∈(0,5+3λmin(W)4L) in [36], and the corresponding requirement for W is that the smallest eigenvalue of W is larger than −5/3. In addition, this condition for the stepsize is shown to be optimal, i.e., EXTRA may diverge if the condition is not satisfied. Though we can always manipulate W to change the smallest eigenvalues, the convergence speed of EXTRA depends on the matrix W. In the numerical experiment, we will see that it is beneficial to choose small eigenvalues for EXTRA in certain scenarios.

The linear convergence of EXTRA requires additional conditions on the functions. There are mainly three types of conditions used in the literature: the strong convexity of ¯f (and some weaker variants) [12], the strong convexity of each fi (and some weaker variants) [36], and the strong convexity of one function fi [23]. Note that the condition on ¯f is much weaker than the other two; there are cases where ¯f is strongly convex but none of fi’s is. E.g., fi=∥eTix∥22 for p=n>1, where ei is the vector whose ith component is 1 and all other components are 0. If ¯f is (restricted) strongly convex with parameter μ¯f, the linear convergence of EXTRA is shown when α∈(0,μ¯f(1+λmin(W))L2) in [12]. The upper bound for the stepsize is very conservative, and the better performance with a larger stepsize was shown numerically in [12] without proof. If each fi is strongly convex with parameter μ, the linear convergence is shown when α∈(0,1+λmin(W)L+μ) and α∈(0,5+3λmin(W)4L) in [27] and [36], respectively. One contribution of this paper to show the linear convergence of EXTRA under the condition of ¯f and α∈(0,5+3λmin(W)4L).

The algorithm NIDS (Network InDepenment Stepsize) was proposed in [13]. Though there is a small difference from EXTRA, NIDS can choose a stepsize that does not depend on the mixing matrices. The convergence of NIDS is shown when I≽W≻−I. The result for linear convergence requires the strong convexity of f(x). Another contribution of this paper is the linear convergence of NIDS under the (restricted) strong convexity of ¯f(x) and relaxed mixing matrices with λmin(W)>−5/3.

In sum, we provide new and stronger linear convergence results for both EXTRA and NIDS. More specifically,

Since agent i has its own estimation xi of the global variables x, we put them together and define

The gradient of f is defined as

In this paper, we use ∥⋅∥ and ⟨⋅,⋅⟩ to denote the Frobenious norm and the corresponding inner product, respectively. For a given matrix M∈Rn×p and any positive (semi)definite matrix H, which is denoted as H≻0 (H≽0 for positive semidefinite), we define ∥M∥H\coloneqq√tr(M⊤HM). The largest and the smallest eigenvalues of a matrix A are defined as λmax(A) and λmin(A). For a symmetric positive semidefinite matrix A, we let λ+min(A) be the smallest nonzero eigenvalue. A† is the pseudo inverse of A. For a matrix A∈Rn×n, we say a matrix B∈Rn×p is in Ker{A} if AB=0n×p, and B is in Range{A} if there exists C∈Rn×p such that B=AC. For simplicity, we may use x+ and x to replace xk+1 and xk, respectively, in the proofs.

One iteration of EXTRA can be expressed as

The stepsize α>0, and the symmetric matrices W and ˜W satisfy I+W≽2˜W≽2W. The initial value x0 is chosen arbitrarily, and x1=Wx0−α∇f(x0). In practice, we usually let ˜W=I+W2.

One iteration of NIDS for solving (1) is

If we choose ˜W=I+W2 in (5), the difference between EXTRA and NIDS happens only in the communicated data, i.e., whether we exchange the gradient information or not? However, this small difference brings big changes in the convergence [13]. In order for both algorithms to converge, we have the following assumptions on W and ˜W.

The connected network G={V,E} consists of a set of nodes V={1,2,⋯,n} and a set of undirected edges E. An undirected edge (i,j)∈E means that there is a connection between agents i and j and both agents can exchange data. The mixing matrices W=[wij]∈Rn×n and ˜W=[˜wij]∈Rn×n satisfy:

Parts 2-4 imply that the spectrum of W is enlarged to (−53,1], while the original assumption is (−1,1] for doubly stochastic matrices. Therefore, in our assumption, I+W2 does not have to be positive definite. This assumption for W is strictly weaker than those in [12] and [13].

Before showing the theoretical results of EXTRA and NIDS, we reformulate both algorithms.

Reformulation of EXTRA: We reformulate EXTRA by introducing a variable y∈Rn×p as

where the second and the last equalities are from (7b) and (7a), respectively.

To establish the linear convergence of EXTRA and NIDS, we need the following two assumptions.

There is a unique solution x∗ for the consensus problem (1).

Each component fi is a proper, closed and convex function with a Lipschitz continuous gradient:

where L>0 is the Lipschitz constant. Furthermore, ¯f(x)=1n∑ni=1fi(x) is (restricted) strongly convex with respect to x∗:

The following two statements are equivalent:

Throughout this section, we assume that Assumptions 1-3 hold.

For simplicity, we introduce some notations. Because of part 4 of Assumption 1, given mixing matrices W and ˜W, there is a constant

Let (x∗,y∗) be a fixed point of (7), it is straightforward to show that x∗ satisfies

For simplicity, we let x+ and x stand for xk+1 and xk, respectively, in the proofs. The same simplification applies to yk.

From Remark 3, we have

Lemma 3 (A key inequality for EXTRA)

and the equality (22) can be rewritten as

and Lemma 2, we have

Note that the following inequality holds,

then the key inequality (3) is obtained.

In the following theorem, we assume G≠0 (i.e., ˜W≠(I+W)/2). It is easy to amend the proof to show the result for this special case.

Under Assumptions 1-3, we define

and choose two small parameters ξ and η such that

In addition, we define

Then for any stepsize we have