On Identifying a Massive Number of Distributions 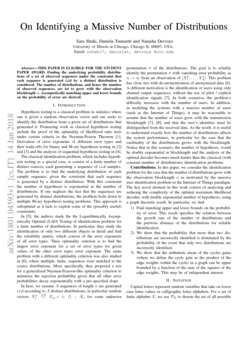 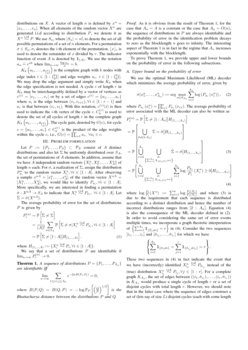 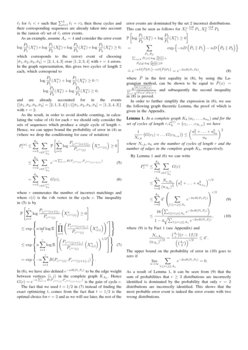 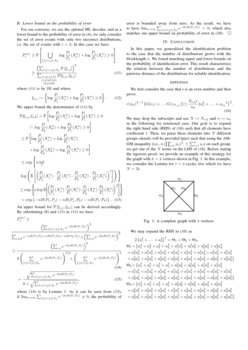 Hypothesis testing is a classical problem in statistics where one is given a random observation vector and one seeks to identify the distribution from a given set of distributions that generated it. Pioneering work in classical hypothesis testing include the proof of the optimality of likelihood ratio tests under certain criteria in the Neyman-Pearon Theorem

The classical identification problem, which includes hypothesis testing as a special case, is consist of a finite number of distinct sources, each generating a sequence of i.i.d samples. The problem is to find the underlying distribution of each sample sequence, given the constraint that each sequence is generated by a distinct distribution. With this constraint the number of hypothesis is exponential in the number of distributions. If one neglects the fact that the sequences are generated by distinct distributions, the problem boils down to multiple M-ary hypothesis testing problems. This approach is suboptimal as it fails to exploit some of the (possibly useful) constraints.

In [5], the authors study the the Logarithmically Asymptotically Optimal (LAO) Testing of identification problem for a finite number of distributions. In particular, they study the identification of only two different objects in detail and find the reliability matrix, which consist of the error exponents of all error types. Their optimality criterion is to find the largest error exponent for a set of error types for given values of the other error types error exponent. The same problem with a different optimality criterion was also studied in [6], where multiple, finite, sequences were matched to the source distributions. More specifically, they proposed a test for a generalized Neyman-Pearson-like optimality criterion to minimize the rejection probability given that all other error probabilities decay exponentially with a pre-specified slope.

In here, we assume A sequences of length n are generated i.i.d according to A distinct distributions; in particular random vectors Xnii.i.d\scalebox1.5[1]$∼$Pσi,i∈[1:A], for some unknown permutation σ of the distributions. The goal is to reliably identify the permutation σ with vanishing error probability as n→∞ from an observation of [Xn1,…,XnA]. This problem has close ties with de-anonymization of anonymized data [6]. A different motivation is the identification of users using only channel output sequences, without the use of pilot / explicit identification signals [7]. In both scenarios, the problem’s difficulty increases with the number of users. In addition, in modeling the systems with a massive number of users (such as the Internet of Things), it may be reasonable to assume that the number of users grow with the transmission blocklength [7], [8], and that the user’s identities must be distinguished from the received data. As the result, it is useful to understand exactly how the number of distributions affects the system performance, in particular for the case that the cardinality of the distributions grows with the blocklength. Notice that in this scenario, the number of hypothesis, would be doubly exponential in blocklength and the analysis of the optimal decoder becomes much harder than the classical (with constant number of distributions) identification problems.

Contributions. In this paper, we consider the identification problem for the case that the number of distributions grow with the observation blocklength n as motivated by the massive user identification problem in the Internet of Things paradigm. The key novel element in this work consist of analyzing and reducing the complexity of the optimal maximum likelihood decoder, with double exponential number of hypothesis, using a graph theoretic result. In particular, we find

X, we use PX to denote the set of all possible distributions on X. A vector of length n is defined by xn=[x1,…,xn]. When all elements of the random vector Xn are generated i.i.d according to distribution P, we denote it as Xni.i.d\scalebox1.5[1]$∼$P. We use Sn, where |Sn|=n!, to denote the set of all possible permutations of a set of n elements. For a permutation σ∈Sn, σi denotes the i-th element of the permutation. ⌊x⌋r is used to denote the remainder of x divided by r. The indicator function of event A is denoted by 1{A}. We use the notation an≐enb when limn→∞logann=b.

be uniformly distributed over

SA, the set of permutations of A elements. In addition, assume that we have A independent random vectors {Xn1,Xn2,…,XnA} of length n each. For σ, a realization of Σ, assign the distribution Pnσi to the random vector Xni,∀i∈[1:A]. After observing a sample xnA=[xn1,…,xnA] of the random vector XnA=[Xn1,…,XnA], we would like to identify Pσi,∀i∈[1:A]. More specifically, we are interested in finding a permutation ^σ:XnA→SA to indicate that Xnii.i.d\scalebox1.5[1]$∼$P^σi, ∀i∈[1:A]. Let ^Σ=^σ(XnA).

We say that a set of distributions P are identifiable if limn→∞P(n)e→0.

A sequence of distributions P={P1,…,PAn} are identifiable iff

where B(P,Q)=B(Q,P)=−logPP[(QP)1/2] is the Bhattacharya distance between the distributions P and Q.

As it is obvious from the result of Theorem 1, for the case that An=A is a constant or the case that An=O(n), the sequence of distributions in P are always identifiable and the probability of error in the identification problem decays to zero as the blocklength n goes to infinity. The interesting aspect of Theorem 1 is in fact in the regime that An increases exponentially with the blocklength.

To prove Theorem 1, we provide upper and lower bounds on the probability of error in the following subsections.

Iii-a Upper bound on the probability of error

We use the optimal Maximum Likelihood (ML) decoder which minimizes the average probability of error, given by

where Pσi(xni)=∏nt=1Pσi(xi,t). The average probability of error associated with the ML decoder can also be written as

where logPiPj(Xn):=∑nt=1logPi(Xt)Pj(Xt) and where (3) is due to the requirement that each sequence is distributed according to a distinct distribution and hence the number of incorrect distributions ranges from [2:An]. Equation (4) is also the consequence of the ML decoder defined in (2). In order to avoid considering the same set of error events multiple times, we incorporate a graph theoretic interpretation of {∑Ani=11{^Σi≠i}=r} in (4). Consider the two sequences [i1,…,ir] and [^σi1,…,^σir] for which we have

These two sequences in (4) in fact indicate the event that we have (incorrectly) identified Xniji.i.d\scalebox1.5[1]$∼$P^σij instead of the (true) distribution Xniji.i.d\scalebox1.5[1]$∼$Pij,∀j∈[1:r]. For a complete graph KAn, the set of edges between ((i1,^σi1),…,(ir,^σir)) in KAn would produce a single cycle of length r or a set of disjoint cycles with total length r. However, we should note that in the latter case where the sequence of edges construct a set of (lets say of size L) disjoint cycles (each with some length ~rl for ~rl<r such that ∑Ll=1~rl=r), then those cycles and their corresponding sequences are already taken into account in the (union of) set of ~rl error events.

As an example, assume An=4 and consider the error event

As the result, in order to avoid double counting, in calculating the value of (4) for each r we should only consider the sets of sequences which produce a single cycle of length r. Hence, we can upper bound the probability of error in (4) as (where we drop the conditioning for ease of notation)

where r enumerates the number of incorrect matchings and where c(i) is the i-th vertex in the cycle c. The inequality in (5) is by

In order to further simplify the expression in (6), we use the following graph theoretic Lemma, the proof of which is given in the Appendix.

Iii-B Lower bound on the probability of error

For our converse, we use the optimal ML decoder, and as a lower bound to the probability of error in (4), we only consider the set of error events with only two incorrect distributions, i.e. the set of events with r=2. In this case we have

We upper bound the denominator of (11) by

We may drop the subscripts and use N:=Nr,k and n:=nk in the following for notational ease. Our goal is to expand the right hand side (RHS) of (16) such that all elements have coefficient 1. Then, we parse these elements into N different groups (details will be provided later) such that using the AM-GM inequality (i.e., n(∏ni=1ai)1n≤∑ni=1ai) on each group, we get one of the N terms on the LHS of (16). Before stating the rigorous proof, we provide an example of this strategy for the graph with k=4 vertices shown in Fig. 1. In this example, we consider the Lemma for r=4 cycles (for which we have N=3).

We proceed to prove Lemma 1 for arbitrary k and (even) r≥2. We propose the following scheme to group the elements on the RHS of (16) and then we prove that this grouping indeed leads to the claimed inequality in the Lemma.

Grouping scheme: For each cycle ci={ai1…,air}, we need a group of elements, Θi, from the RHS of (16). In this regard, we consider all possible subsets of the edges of cycle ci with 1:r2 elements (e.g. {{ai1},…{ai1,ai2},…{ai1…,air/2},…}). For each one of these subsets, we find the respective elements from the RHS of (16) that is the multiplication of the elements in that subset. For example, for the subset {ai1,ai2,ai3}, we consider the elements like ani1i1ani2i2ani3i3 for all possible ni1,ni2,ni3>0 from the RHS of (16). However, note that we do not assign all such elements to cycle ci only. If there are l cycles of length r that all contain {ai1,ai2,ai3}, we should assign 1l of the elements like ani1i1ani2i2ani3i3, ni1,ni2,ni3>0 to cycle ci (so that we can assign the same amount of elements to other cycles with similar edges).

We state some facts, which can be easily verified:

Fact 2. By expanding the RHS of (16) such that all elements have coefficient 1, we end up with (Nrn)nr2 elements.

Fact 3. Expanding the RHS of (16) such that all elements have coefficient 1, and finding their product yields

Fact 4. In above grouping scheme each element on the RHS of (16) is summed in exactly one group. Hence, by symmetry and Fact 2, each group is the sum of rnr2−1 elements.

Now, consider any two cycles c(e)i={ai1,…,air},c(e)j={aj1,…,ajr}. Assume that using the above grouping scheme, we get the group of elements Θi,Θj (where by fact 3 each one is the sum of rnr2−1 elements). If we apply the AM-GM inequality on each one of the two groups, we get