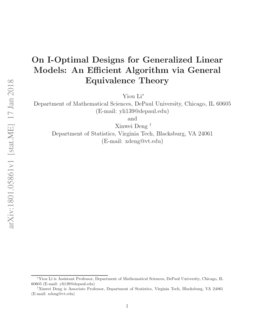 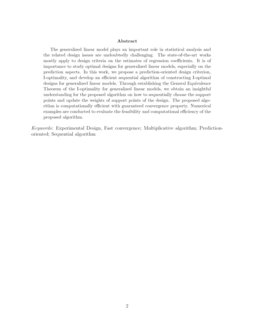 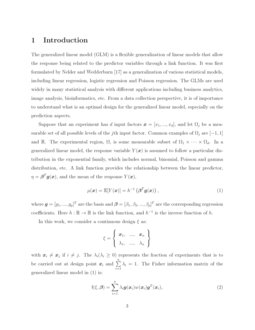 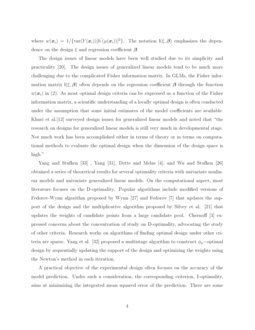 The generalized linear model (GLM) is a flexible generalization of linear models that allow the response being related to the predictor variables through a link function. It was first formulated by Nelder and Wedderburn

as a generalization of various statistical models, including linear regression, logistic regression and Poisson regression. The GLMs are used widely in many statistical analysis with different applications including business analytics, image analysis, bioinformatics, etc. From a data collection perspective, it is of importance to understand what is an optimal design for the generalized linear model, especially on the prediction aspects.

Suppose that an experiment has d input factors x=[x1,...,xd], and let Ωj be a measurable set of all possible levels of the jth input factor. Common examples of Ωj are [−1,1] and R. The experimental region, Ω, is some measurable subset of Ω1×⋯×Ωd

. In a generalized linear model, the response variable

is assumed to follow a particular distribution in the exponential family, which includes normal, binomial, Poisson and gamma distribution, etc. A link function provides the relationship between the linear predictor,

where g=[g1,...,gp]T are the basis and β=[β1,β2,...,βp]T are the corresponding regression coefficients. Here h:R→R is the link function, and h−1 is the inverse function of h.

In this work, we consider a continuous design ξ as:

with xi≠xj if i≠j. The λi(λi≥0) represents the fraction of experiments that is to be carried out at design point xi and n∑i=1λi=1. The Fisher information matrix of the generalized linear model in (1) is:

where w(xi)=1/{var(Y(xi))[h′(μ(xi))]2}. The notation I(ξ,β) emphasizes the dependence on the design ξ and regression coefficient β.

The design issues of linear models have been well studied due to its simplicity and practicality [20]. The design issues of generalized linear models tend to be much more challenging due to the complicated Fisher information matrix. In GLMs, the Fisher information matrix I(ξ,β) often depends on the regression coefficient β through the function w(xi) in (2). As most optimal design criteria can be expressed as a function of the Fisher information matrix, a scientific understanding of a locally optimal design is often conducted under the assumption that some initial estimates of the model coefficients are available. Khuri et al.[12] surveyed design issues for generalized linear models and noted that “the research on designs for generalized linear models is still very much in developmental stage. Not much work has been accomplished either in terms of theory or in terms on computational methods to evaluate the optimal design when the dimension of the design space is high.”

Yang and Stufken [33] , Yang [31], Dette and Melas [4], and Wu and Stufken [26] obtained a series of theoretical results for several optimality criteria with univariate nonlinear models and univariate generalized linear models. On the computational aspect, most literature focuses on the D-optimality. Popular algorithms include modified versions of Fedorov-Wynn algorithm proposed by Wynn [27] and Fedorov [7] that updates the support of the design and the multiplicative algorithm proposed by Silvey et al. [21] that updates the weights of candidate points from a large candidate pool. Chernoff [3] expressed concerns about the concentration of study on D-optimality, advocating the study of other criteria. Research works on algorithms of finding optimal design under other criteria are sparse. Yang et al. [32] proposed a multistage algorithm to construct ϕp−optimal design by sequentially updating the support of the design and optimizing the weights using the Newton’s method in each iteration.

A practical objective of the experimental design often focuses on the accuracy of the model prediction. Under such a consideration, the corresponding criterion, I-optimality, aims at minimizing the integrated mean squared error of the prediction. There are some literatures on I-optimality for linear regression models. Haines[11] proposed a simulated annealing algorithm to obtain exact I-optimal design. Meyer and Nachtsheim[15][16] used simulated annealing and coordinate-exchange algorithms to construct exact I-optimal design. Recently, Goos et al.[10] proposed a modified multiplicative algorithm to find I-optimal designs for the mixture experiments.

The remainder of this work is organized as follows. We introduce the I-optimality criterion for the generalized linear model in Section 2. In Section 3, we derive the General Equivalence Theorem on the I-optimality for the generalized linear models. We detail the proposed sequential algorithm and establish its the convergence properties in Sections 4-5. Numerical examples are conducted in Section 6 to evaluate the performance of the proposed algorithm. We conclude this work with some discussion in Section 7.

2 The I-Optimality Criterion for GLM

For the generalized linear models, one practical goal is to make prediction of response Y(x) at given input x. Thus it is important to adopt the predication oriented criterion for considering the optimal design. The integrated mean squared error (IMSE) is defined as the expected value of mean squared error between fitted mean response ^μ(x) and true mean response μ(x) over the domain of input x with distribution of input x as FIMSE on the experimental region Ω, i.e., E[∫Ω(^μ(x)−μ(x))2dFIMSE].

Under the context of generalized linear models, the fitted mean response ^μ(x)=h−1(^βTg(x)) can be expanded around the true mean response μ(x)=h−1(βTg(x)) using Taylor expansion, which is

with c(x)=(∂h−1∂β1(x),...,∂h−1∂βd(x))T=g(x)(dh−1dη). Here η=βTg(x) is the linear predictor. Then, using the above first-order Taylor expansion, the integrated mean squared error could be approximated with,

In numerical analysis, the first-order Taylor expansion is commonly used to approximate the difference of a nonlinear function when evaluated at two close points. Considering the design issue for generalized linear models, similar approaches was commonly used in the literature, such as the work in Schein and Ungar [19] for the logistic regression models.

The IMSE(ξ,β) could be expressed as the trace of the product of two matrices,

The approximation is provided by the fact that the estimated regression coefficient ^β follows N(β,I(ξ,β)−1) asymptotically. ∎

In this article, we focus on local I-optimal design with a given regression coefficient β. To simplify the notation, in the rest of the article, β is omitted from the notation I(ξ,β) of the Fisher information matrix, and I(ξ) is used instead. The following lemma shows the convexity of the IMSE(ξ,β), which provides a key fact that facilitates the proof of the General Equivalence Theorem in Section 3.

The IMSE(ξ,β) is a convex function of the design ξ.

Consider two designs ξ1 and ξ2, and define ξ=(1−a)ξ1+aξ2. With 0≤a≤1, ξ is still a feasible design. The Fisher information matrix of ξ could be expressed as

In this section, we will derive the General Equivalence Theorem of I-optimality for generalized linear models. The established theoretical results facilitate the sequential choice of support points as that of Fedorov-Wynn algorithm [27, 7].

We first investigate the directional derivative of IMSE(ξ,β) with respect to ξ. Given two designs ξ and ξ′, let the design ~ξ be constructed as

Then, the derivative of IMSE(ξ,β) in the direction of design ξ′ is

The directional derivative of IMSE(ξ,β) in the direction of any design ξ′ is,

Then, the directional derivative of IMSE(ξ,β) is

The directional derivative of IMSE(ξ,β) in the direction of a single point x is given as,

Consider ξ′ as as design with one design point x whose weight is 1. ∎

Based on Lemma 2 and the above Corollary 1, we can derive the following General Equivalence Theorem of I-optimality for generalized linear models. This theorem provides an intuitive understanding on how to choose support points sequentially and check the optimality of a design.

The following three conditions of ξ∗ are equivalent:

Theorem 2 provides an intuitive way for choosing the support points to construct an I-optimal design in a sequential fashion. According to Theorem 2, for an optimal design ξ∗, the directional derivative ϕ(x,ξ∗) is non-negative for any x∈Ω. It implies that for any non-optimal design, there will be some directions in which the directional derivative ϕ(x,ξ)<0. Given a current design ξ, to gain the maximal decrease in the I-optimality criterion, we would choose a new support point x∗ to be added into the design, if ϕ(x∗,ξ)=minx∈Ωϕ(x,ξ)<0. Then one can optimize the weights of all support points in the updated design, which will be described in Algorithm 1 in Section 4. By iterating the selection of support point and the weight update of all support points, this two-step iterative procedure can be continued until minx∈Ωϕ(x,ξ)≥0 for all x∈Ω, which means the updated design is I-optimal. Such a sequential algorithm of constructing optimal designs, as described in Algorithm 2 in Section 5, follows similar spirits in the widely-used Fedorov-Wynn algorithm [27, 28]. Note that the I-optimal designs are not necessarily unique. More details will be discussed in Section 6.2 after the proposed algorithms are introduced.

In next section, we will first discuss the details on how to optimize the weights of supports point for a given design. Then we will describe Algorithm 2 in details in Section 5 on the sequential algorithm of constructing I-optimal designs for the generalized linear models.

4 Optimal Weights Given the Design Points

In this section, we will investigate how to assign optimal weights to support points that minimize IMSE(ξ,β) when the design points are given. In Wynn’s work [27, 28], equal weights are assigned to all design points after a new design point is added. Whittle [25] made improvement by choosing the weight of the newly added point as the one that minimizes the optimality criterion and the weights of existing points proportional to their current weights. Yang et al. [32] proposed using a Newton-Raphson method to find the optimal weights, which solves for the roots of first order partial derivatives of the criterion with respect to the weights. Note that the Newton-Raphson method may get negative weights and thus more efforts need to be taken to eliminate those negative weights. Also when the first order partial derivatives does not exist, such as under the c-optimality criterion, Yang et al.’s algorithm [32] is not applicable.

To address the above challenges, we develop a modified multiplicative algorithm for finding the optimal weights of support points. The developed algorithm does not require the partial derivative and Hessian matrix inversion, which can be computationally efficient.

to be the weight vector with

A superscript λ is added to emphasize that only the weight vector is changeable in the design under this situation. The optimal weight vector λ∗ should be the one that minimizes IMSE(ξ,β) with design points x1,...,xn fixed.

The IMSE(ξ,β) is a convex function of weight vector λ.

The directional derivative of IMSE(ξ,β) in the direction of a new weight vector Δλ=[Δλ1,...,Δλn]T,

This is a special case of the general directional derivative in equation 3, where the design points in ξ′=ξΔλ and ξ=ξλ are the same, but with different weights. Thus, Theorem 1 still holds and

The following result provides a necessary and sufficient condition of optimal weight vector to minimize IMSE(ξ,β) when the design points are fixed.

Given a fixed set of design points x1,...,xn, the following two conditions on the weight vector λ∗=[λ∗1,...,λ∗n]T are equivalent:

The proof of (1)→(2) in Theorem 3 can also be derived by the method of Lagrange multipliers.

The results in Theorem 3 provides a useful gateway to design an effective algorithm for finding the optimal weights given the design points.

Base on Theorem 3 for given design points, the optimal weight vector that aims at minimizing IMSE(ξ,β) should be the solution of a system of equations as

The weight of a design point xi should be adjusted according to the values of the two sides of equation (9). Note that for any weight vector λ,

Then, our strategy of finding optimal weight would be, for a design point xi,

Thus, the ratio w(xi)g(xi)TI(ξλ)−1AI(ξλ)−1g(xi)tr(I(ξλ)−1A) would indicate a good adjustment of the current weight of a design point xi.

In Algorithm 1, the value of 0<δ<1 is the convergence parameter chosen by the user. Following the suggestion by Fellman [8] and Torsney [9], we use δ=12. The following lemma provides a justification that every iteration in Algorithm 1 is always feasible.

A positive definite A=∫Ωg(x)gT(x)[dh−1dη]2dFIMSE would ensure the iteration in equation (10) to be always feasible, i.e., the denominator