On Generalization of Graph Autoencoders with Adversarial Training 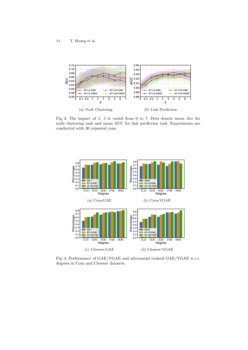 On Generalization of Graph Autoencoders with Adversarial Training[ECML2021]

Networks are ubiquitous in a plenty of real-world applications and they contain relationships between entities and attributes of entities. Modeling such data is challenging due to its non-Euclidean characteristic. Recently, graph embedding that converts graph data into low dimensional feature space has emerged as a popular method to model graph data, For example, DeepWalk [14], node2vec [7] and LINE [23] learn graph embedding by extracting patterns from the graph. Graph Convolutions Networks (GCNs) [9] learn graph embedding by repeated multiplication of normalized adjacency matrix and feature matrix. In particular, graph autoencoder (GAE) [10, 24, 27] and graph variational autoencoder (VGAE) [10]

have been shown to be powerful node embedding methods as unsupervised learning. They have been applied to many machine learning tasks, e.g. node clustering

Adversarial training is an approach for increasing model’s resilience against adversarial perturbations by including adversarial examples in the training set [11]. Several recent studies demonstrate that adversarial training improves feature representations leading to better performance for downstream tasks [26, 18]. However, little work in this direction has been done for GAE and VGAE. Besides, real-world graphs are usually highly noisy and incomplete, which may lead to a sub-optimal results for standard trained models [32]. Therefore, we are interested to seek answers to the following two questions:

We first summarize some notations and definitions used in this paper. Following the commonly used notations, we use bold uppercase characters for matrices, e.g. X

We consider an attributed network G={V,E,X} with |V|=n nodes, |E|=m edges and X node attributed matrix. A is the binary adjacency matrix of G.

Graph autoencoders is a kind of unsupervised learning models on graph-structure data [10], which aim at learning low dimensional representations for each node by reconstructing inputs. It has been demonstrated to achieve competitive results in multiple tasks, e.g. link prediction [16, 10, 17], node clustering [16, 24, 20], graph anomaly detection [4, 13]. Generally, graph autoencoder consists of a graph convolutional network for encoder and an inner product for decoder [10]. Formally, it can be expressed as follows:

GCN is a graph convolutional network, Z is the learned low dimensional representations and ^A is the reconstructed adjacency matrix.

Kipf and Welling [10] introduced variational graph autoencoder (VGAE) which is a probabilistic model. VGAE is consisted of inference model and generative model. In their approach, the inference model, i.e. corresponding to the encoder of VGAE, is expressed as follows:

are learned by a graph neural network respectively. That is,

The generative model, i.e. corresponding to the decoder of autoencoder, is designed as an inner product between latent variables Z, which is formally expressed as follows:

During the training phase, the parameters will be updated by minimizing the the variational lower bound Lvae:

where a Gaussian prior is adopted for .

where fθ is a supervised model, X′ is the adversarial examples that maximize KL divergence and P(Y|X)

is the output probability after softmax.

is a tunable hyperparameter and it controls the strength of the

In this section, we formulate L2 and L∞ adversarial training for GAE and VGAE respectively.

Considering that: (1) the inputs of GAE contains adjacency matrix and attributes, (2) the latent representation Z is expected to be invariant to the input perturbation, we reformulate the loss function in Eq. 3 as follows:

For X′ bounded by L2 norm ball, the perturbed data in t-th step Xt is expressed as follows:

where ∏ is the projection operator and B(X,ϵ∥X∥2) is the L2 norm ball of nodal attributes xi:{x′i:∥∥x′i−xi∥∥2≤ϵ∥xi∥2}.

For X′ bounded by L∞ norm ball, the perturbed data in t-th step Xt is expressed as follows:

For A′ bounded by L2 norm ball, the perturbed data in t-th step At is expressed as follows:

For A′ bounded by L∞ norm ball, the perturbed data in t-th step At is expressed as follows:

Similarly to GAE, we reformulate the loss function for training VGAE (Eq. 6) as follows:

For convenience, we abbreviate L2 and L∞ adversarial training as AT-2 and AT-Linf respectively in the following tables and figures where L2/L∞ denote both attributes and adjacency matrix perturbation are bounded by L2/L∞ norm ball.

In this section, we present the results of the performance evaluation of L2 and L∞ adversarial training under three main applications of GAE and VGAE: link prediction, node clustering, and graph anomaly detection. Then we conduct parameter analysis experiments to explore which factors influence the performance.

. We used six real-world datasets: Cora, Citeseer and PubMed for link prediction and node clustering tasks, and BlogCatalog, ACM and Flickr for the graph anomaly detection task. The detailed descriptions of the six datasets are showed in Table

Model Architecture. All our experiments are based on the GAE/VGAE model where the encoder/inference model is consisted with a two-layer GCN by default.

, we use the area under a receiver operating characteristic curve (AUC) and average precision (AP) as the evaluation metric. We conduct 30 repeat experiments with random splitting datasets into 85%, 5% and 10% for training sets, validation sets and test sets respectively. We report the mean and standard deviation values on test sets.

. We train models on Cora and Citeseer datasets with 600 epochs, and PubMed with 800 epochs. All models are optimized with Adam optimizer and 0.01 learning rate. The

For standard training GAE and VGAE, we run the official Pytorch geometric code

222https://github.com/rusty1s/pytorch_geometric/blob/master/examples/autoencoder.py with 600 epochs for Citeseer and Cora datasets, 1000 epochs 333Considering PubMed is big graph data, we use more epochs in order to avoiding underfitting.

for PubMed dataset. Other parameters are set the same as in

[10]. Experimental Results. The results are showed in Table 2. It can be seen that both L2 and L∞ Adversarial trained GAE and VGAE models consistently boost their performance for both AUC and AP metrics on Cora, Citeseer and PubMed datasets. Specifically, the improvements on Cora and Citeseer dataset reaches at least 2% for both GAE and VGAE (Table 2). The improvements on PubMed is relative small with around 0.3%.

Likewise, for standard GAE and VGAE, we run the official Pytorch geometric code with 400 epochs for Citeseer and Cora datasets, 800 epochs for PubMed dataset. Experimental Results. The results are showed in Table 3, Table 4 and Table 5. It can be seen that both L2 and L∞ adversarial trained models consistently outperform the standard trained models for all metrics. In particular, on Cora and Citeseer datasets, both L2 and L∞ adversarial training improve the performance with large margin for all metrics, i.e. at least +5.4% for GAE, +6.7% for VGAE on Cora dataset (Table 3), and at least +5.8% for GAE, +5.6% for VGAE on Citeseer dataset (Table 4).

In this experiments, we set s=15 and t=10,15,20 for BlogCatalog, Flickr and ACM respectively which are the same to [4, 13]. Experimental Results. From Table 6, it can be seen that both L2 and L∞ adversarial training boost the performance in detecting anomalous nodes. Since adversarial training tend to learn feature representations that are less sensitive to perturbations in the inputs, we conjecture that the adversarial trained node embeddings are less influenced by the anomalous nodes, which helps the graph anomaly detection. A similar claim are also made in image domain [15]

where they demonstrate adversarial training of autoencoders are beneficial to novelty detection.

Results are showed in Fig. 14. From Fig. 14, we can see that there is a slightly drop on both link prediction and node clustering tasks when increasing T from 2 to 4, which implies that a big T is not helpful to improve the generalization of node embeddings learned by GAE and VGAE. We suggest that one step is good choice for generating adjacency matrix perturbation and attributes perturbation in both L2 and L∞ adversarial training.

Results are showed in Fig. 17. From Fig. 17, it can be seen that there is a significant increasing trend with the increase of λ, which indicates the effectiveness of both L2 and L∞ adversarial training in improving the generalization of GAE and VGAE. Besides, we also notice that a too large λ is not necessary and may lead to a negative effect in generalization of GAE and VGAE.

In this section, we explore whether the performance of adversarial trained GAE/VGAE is sensitive to the degree of nodes. To conduct this experiments, we firstly learn node embeddings from Cora and Citeseer datasets by GAE/VGAE with L2/L∞ adversarial training and standard training respectively. The hyper-parameters are set the same as in the Node clustering task. Then we build a linear classification based on the learned node embeddings. Their accuracy can be found in Appendix. The accuracy with respect to degree distribution are showed in Fig. 22.