On Fairness, Diversity and Randomness in Algorithmic Decision Making

Consider a binary decision making process where a single machine learning classifier replaces a multitude of humans. We raise questions about the resulting loss of diversity in the decision making process. We study the potential benefits of using random classifier ensembles instead of a single classifier in the context of fairness-aware learning and demonstrate various attractive properties: (i) an ensemble of fair classifiers is guaranteed to be fair, for several different measures of fairness, (ii) an ensemble of unfair classifiers can still achieve fair outcomes, and (iii) an ensemble of classifiers can achieve better accuracy-fairness trade-offs than a single classifier. Finally, we introduce notions of distributional fairness to characterize further potential benefits of random classifier ensembles. 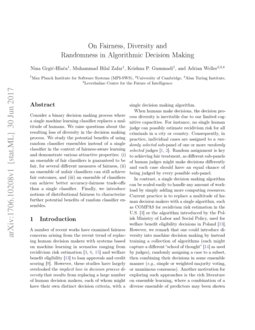 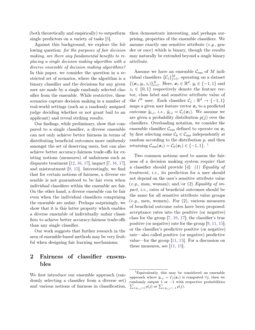 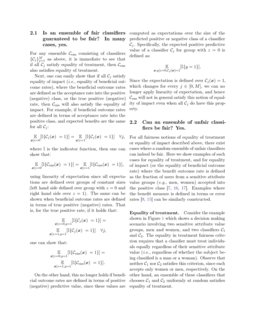 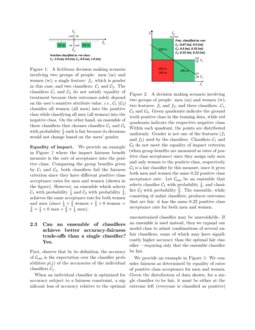 Subjective fairness: Fairness is in the eye of the beholder

Fair Inputs and Fair Outputs: The Incompatibility of Fairness in Privacy and Accuracy

Prototype Based Classification from Hierarchy to Fairness

[3, 6, 15] and welfare benefit eligibility [13] to loan approvals and credit scoring [9]. However, these studies have largely overlooked the implicit loss in decision process diversity that results from replacing a large number of human decision makers, each of whom might have their own distinct decision criteria, with a single decision making algorithm.

When humans make decisions, the decision process diversity is inevitable due to our limited cognitive capacities. For instance, no single human judge can possibly estimate recidivism risk for all criminals in a city or country. Consequently, in practice, individual cases are assigned to a randomly selected sub-panel of one or more randomly selected judges [1, 2]. Random assignment is key to achieving fair treatment, as different sub-panels of human judges might make decisions differently and each case should have an equal chance of being judged by every possible sub-panel.

In contrast, a single decision making algorithm can be scaled easily to handle any amount of workload by simply adding more computing resources. Current practice is to replace a multitude of human decision makers with a single algorithm, such as COMPAS for recidivism risk estimation in the U.S. [3] or the algorithm introduced by the Polish Ministry of Labor and Social Policy, used for welfare benefit eligibility decisions in Poland [13]. However, we remark that one could introduce diversity into machine decision making by instead training a collection of algorithms (each might capture a different “school of thought” [14] as used by judges), randomly assigning a case to a subset, then combining their decisions in some ensemble manner (, simple or weighted majority voting, or unanimous consensus). Another motivation for exploring such approaches is the rich literature on ensemble learning, where a combination of a diverse ensemble of predictors may been shown (both theoretically and empirically) to outperform single predictors on a variety of tasks [5].

Against this background, we explore the following question: for the purposes of fair decision making, are there any fundamental benefits to replacing a single decision making algorithm with a diverse ensemble of decision making algorithms? In this paper, we consider the question in a restricted set of scenarios, where the algorithm is a binary classifier and the decisions for any given user are made by a single randomly selected classifier from the ensemble. While restrictive, these scenarios capture decision making in a number of real-world settings (such as a randomly assigned judge deciding whether or not grant bail to an applicant) and reveal striking results.

Our work suggests that further research in the area of ensemble-based methods may be very fruitful when designing fair learning mechanisms.

We first introduce our ensemble approach (randomly selecting a classifier from a diverse set) and various notions of fairness in classification, then demonstrate interesting, and perhaps surprising, properties of the ensemble classifiers. We assume exactly one sensitive attribute (, gender or race) which is binary, though the results may naturally be extended beyond a single binary attribute.

respectively denote the feature vector, class label and sensitive attribute value of the

. We assume we are given a probability distribution

p(j) over the classifiers. Overloading notation, we consider the ensemble classifier \Ccalens defined to operate on \xbi by first selecting some \Ccalk∈\Ccalens independently at random according to the distribution p, and then returning \Ccalens(\xbi)=\Ccalk(\xbi)∈{−1,1}. 111Equivalently, this may be considered an ensemble approach where ^yi,j=\Ccalj(\xbi) is computed ∀j, then we randomly output 1 or −1 with respective probabilities ∑j:^yi,j=1p(j) or ∑j:^yi,j=−1p(j).

2.1 Is an ensemble of fair classifiers guaranteed to be fair? In many cases, yes.

where \II is the indicator function, then one can show that:

one can show that:

Since the expectation is defined over \Ccalj(\xb)=1, which changes for every j∈[0,M], we can no longer apply linearity of expectation, and hence \Ccalens will not in general satisfy this notion of equality of impact even when all \Ccalj do have this property.

2.2 Can an ensemble of unfair classifiers be fair? Yes.

Consider the example shown in Figure 1 which shows a decision making scenario involving two sensitive attribute value groups, men and women, and two classifiers \Ccal1 and \Ccal2. The equality in treatment fairness criterion requires that a classifier must treat individuals equally regardless of their sensitive attribute value (, regardless of whether the subject being classified is a man or a woman). Observe that neither \Ccal1 nor \Ccal2 satisfies this criterion, since each accepts only women or men, respectively. On the other hand, an ensemble of these classifiers that chooses \Ccal1 and \Ccal2 uniformly at random satisfies equality of treatment.

We provide an example in Figure 2 where the impact fairness benefit measure is the rate of acceptance into the positive class. Comparing the group benefits given by \Ccal1 and \Ccal2, both classifiers fail the fairness criterion since they have different positive class acceptance rates for men and women (shown in the figure). However, an ensemble which selects \Ccal1 with probability 13 and \Ccal2 with probability 23, achieves the same acceptance rate for both women and men (since 13×23 women+23×0 women=29=13×0 men+23×13 men).

2.3 Can an ensemble of classifiers achieve better accuracy-fairness trade-offs than a single classifier? Yes.

First, observe that by its definition, the accuracy of \Ccalens is the expectation over the classifier probabilities p(j) of the accuracies of the individual classifiers \Ccalj.

When an individual classifier is optimized for accuracy subject to a fairness constraint, a significant loss of accuracy relative to the optimal unconstrained classifier may be unavoidable. If an ensemble is used instead, then we expand our model class to admit combinations of several unfair classifiers, some of which may have significantly higher accuracy than the optimal fair classifier —requiring only that the ensemble classifier be fair.

We provide an example in Figure 3. We consider fairness as determined by equality of rates of positive class acceptance for men and women. Given the distribution of data shown, for a single classifier to be fair, it must be either at the extreme left (everyone is classified as positive) or at the extreme right (everyone is classified as negative)—in either case with accuracy of 50%, which in this example is the optimal achievable accuracy for a single fair classifier.

Now consider an ensemble of the two classifiers \Ccal1 and \Ccal2 shown, selecting either one with probability 12. This ensemble satisfies the fairness criterion (with positive rates of 0.25 for each sex) and has an accuracy of 75%, which is much better than the single fair classifier optimum of 50%.

This suggests an interesting question: Are the outcomes of the ensemble classifier more fair than those of the individual classifiers (\Ccal1 and \Ccal2) that comprise it?

While all these classifiers satisfy the equality in impact fairness constraint, one could make the case that the ensemble is more fair as it offers all women an equal chance at getting beneficial outcomes, whereas \Ccal1 and \Ccal2 pre-determine the subset of women who will get the beneficial outcomes.

To our knowledge, no existing measure of algorithmic fairness captures this notion of evenly distributing beneficial outcomes across all members of an attribute group. Rather, existing fairness measures focus on fair assignment of outcomes between sensitive groups (inter-group fairness), while largely ignoring fair assignment of outcomes within a sensitive group (intra-group fairness).

These observations suggest the need in future work for new notions of distributional fairness to characterize the benefits achievable with diverse classifier ensembles.

We have begun to explore the properties of using a random ensemble of classifiers in fair decision making, focusing on randomly selecting one classifier from a diverse set. It will be interesting in future work to explore a broader set of ensemble methods. Fish et al. [8] examined fairness when constructing a deterministic classifier using boosting, but we are not aware of prior work in fairness which considers how randomness in ensembles may be helpful.

We note a similarity to a Bayesian perspective: rather than aiming for the one true classifier, instead we work with a probability distribution over possible classifiers. An interesting question for future work is how to update the distribution over classifiers as more data becomes available, noting that we may want to maintain diversity [10].

Decision making systems consisting of just one classifier facilitate the ability of users to game the system. On the other hand, in an ensemble scheme such as the one we consider where a classifier is randomly selected: if an individual aims to achieve some high threshold level of probability of a good classification, first she must acquire knowledge about the whole set of classifiers and the probability distribution over them, and then she must attain features some distance beyond the expected decision boundary of the ensemble (‘a fence around the law’).

A common notion of fairness is that individuals with similar features should obtain similar outcomes. However, a single deterministic classifier boundary causes individuals who are just on either side to obtain completely different outcomes. Using instead a distribution over boundaries leads to a smoother, more robust profile of expected outcomes, highlighting another useful property of ensembles in the context of fair classification.

AW acknowledges support by the Alan Turing Institute under EPSRC grant EP/N510129/1, and by the Leverhulme Trust via the CFI.