On Extending Neural Networks with Loss Ensembles for Text Classification

Ensemble techniques are powerful approaches that combine several weak learners to build a stronger one. As a meta learning framework, ensemble techniques can easily be applied to many machine learning techniques. In this paper we propose a neural network extended with an ensemble loss function for text classification. The weight of each weak loss function is tuned within the training phase through the gradient propagation optimization method of the neural network. The approach is evaluated on several text classification datasets. We also evaluate its performance in various environments with several degrees of label noise. Experimental results indicate an improvement of the results and strong resilience against label noise in comparison with other methods. 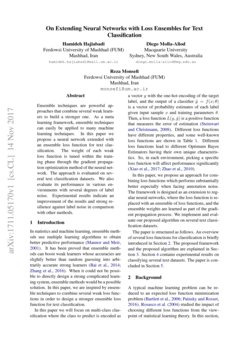 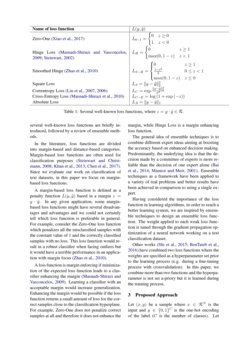 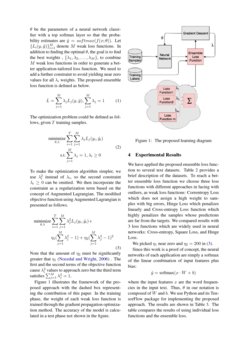 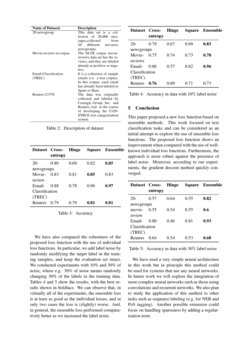 In statistics and machine learning, ensemble methods use multiple learning algorithms to obtain better predictive performance Mannor and Meir (2001). It has been proved that ensemble methods can boost weak learners whose accuracies are slightly better than random guessing into arbitrarily accurate strong learners Bai et al. (2014); Zhang et al. (2016). When it could not be possible to directly design a strong complicated learning system, ensemble methods would be a possible solution. In this paper, we are inspired by ensemble techniques to combine several weak loss functions in order to design a stronger ensemble loss function for text classification.

with the one-hot encoding of the target label, and the output of a classifier

In this paper, we propose an approach for combining loss functions which performs substantially better especially when facing annotation noise. The framework is designed as an extension to regular neural networks, where the loss function is replaced with an ensemble of loss functions, and the ensemble weights are learned as part of the gradient propagation process. We implement and evaluate our proposed algorithm on several text classification datasets.

The paper is structured as follows. An overview of several loss functions for classification is briefly introduced in Section 2. The proposed framework and the proposed algorithm are explained in Section 3. Section 4 contains experimental results on classifying several text datasets. The paper is concluded in Section 5.

. rosasco2004loss studied the impact of choosing different loss functions from the viewpoint of statistical learning theory. In this section, several well-known loss functions are briefly introduced, followed by a review of ensemble methods.

A margin-based loss function is defined as a penalty function L(y,^y) based in a margin z=y⋅^y

. Learning a classifier with an acceptable margin would increase generalization. Enhancing the margin would be possible if the loss function returns a small amount of loss for the correct samples close to the classification hyperplane. For example, Zero-One does not penalize correct samples at all and therefore it does not enhance the margin, while Hinge Loss is a margin enhancing loss function.

The general idea of ensemble techniques is to combine different expert ideas aiming at boosting the accuracy based on enhanced decision making. Predominantly, the underlying idea is that the decision made by a committee of experts is more reliable than the decision of one expert alone Bai et al. (2014); Mannor and Meir (2001). Ensemble techniques as a framework have been applied to a variety of real problems and better results have been achieved in comparison to using a single expert.

Having considered the importance of the loss function in learning algorithms, in order to reach a better learning system, we are inspired by ensemble techniques to design an ensemble loss function. The weight applied to each weak loss function is tuned through the gradient propagation optimization of a neural network working on a text classification dataset.

have combined two loss functions where the weights are specified as a hyperparameter set prior to the learning process (e.g. during a fine-tuning process with crossvalidation). In this paper, we combine more than two functions and the hyperparameter is not set a-priory but it is learned during the training process.

^y=softmax(f(x;θ)). Let {Li(y,^y)}Mi=1 denote M weak loss functions. In addition to finding the optimal θ, the goal is to find the best weights , {λ1,λ2,…,λM}, to combine M weak loss functions in order to generate a better application-tailored loss function. We need to add a further constraint to avoid yielding near zero values for all λi weights. The proposed ensemble loss function is defined as below.

The optimization problem could be defined as follows, given T training samples.

Note that the amount of η2 must be significantly greater that η1 Nocedal and Wright (2006) . The first and the second terms of the objective function cause λ2i values to approach zero but the third term satisfies ∑Mj=1λ2j=1.

Figure 1 illustrates the framework of the proposed approach with the dashed box representing the contribution of this paper. In the training phase, the weight of each weak loss function is trained through the gradient propagation optimization method. The accuracy of the model is calculated in a test phase not shown in the figure.

Since this work is a proof of concept, the neural networks of each application are simply a softmax of the linear combination of input features plus bias:

where the input features x are the word frequencies in the input text. Thus, θ in our notation is composed of W and b

. We use Python and its TensorFlow package for implementing the proposed approach. The results are shown in Table

3. The table compares the results of using individual loss functions and the ensemble loss.

We have also compared the robustness of the proposed loss function with the use of individual loss functions. In particular, we add label noise by randomly modifying the target label in the training samples, and keep the evaluation set intact. We conducted experiments with 10% and 30% of noise, where e.g. 30% of noise means randomly changing 30% of the labels in the training data. Tables 4 and 5 show the results, with the best results shown in boldface. We can observe that, in virtually all of the experiments, the ensemble loss is at least as good as the individual losses, and in only two cases the loss is (slightly) worse. And, in general, the ensemble loss performed comparatively better as we increased the label noise.

This paper proposed a new loss function based on ensemble methods. This work focused on text classification tasks and can be considered as an initial attempt to explore the use of ensemble loss functions. The proposed loss function shows an improvement when compared with the use of well-known individual loss functions. Furthermore, the approach is more robust against the presence of label noise. Moreover, according to our experiments, the gradient descent method quickly converged.

We have used a very simple neural architecture in this work but in principle this method could be used for systems that use any neural networks. In future work we will explore the integration of more complex neural networks such as those using convolutions and recurrent networks. We also plan to study the application of this method to other tasks such as sequence labeling (e.g. for NER and PoS tagging). Another possible extension could focus on handling sparseness by adding a regularization term.