In this work, we demonstrate that applying deep generative machine learning models for lattice field theory is a promising route for solving problems where Markov Chain Monte Carlo (MCMC) methods are problematic. More specifically, we show that generative models can be used to estimate the absolute value of the free energy, which is in contrast to existing MCMC-based methods which are limited to only estimate free energy differences. We demonstrate the effectiveness of the proposed method for two-dimensional ϕ^4 theory and compare it to MCMC-based methods in detailed numerical experiments. 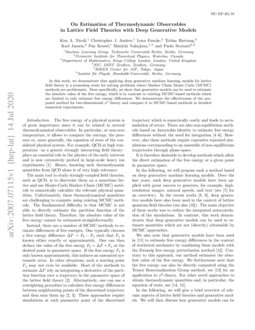 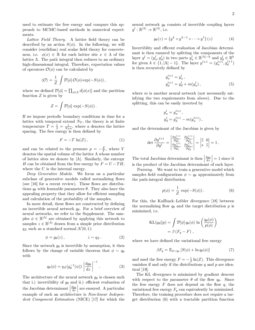 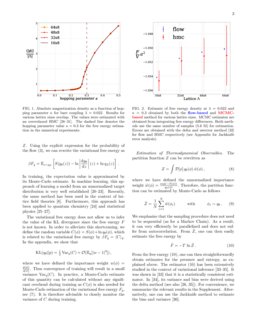 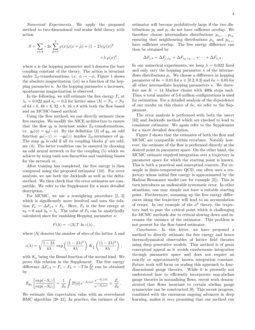 Machine Learning of Thermodynamic Observables in the Presence of Mode Collapse

Estimating the free energy, as well as other thermodynamic observables, ...
Kim A. Nicoli, et al. ∙

It was recently proposed that neural networks could be used to approxima...
Piotr Białas, et al. ∙

Appendix A Conventions for Action

It can be obtained by starting from the (more standard) action

and performing the following re-definitions

Appendix B A brief overview of Deep Learning

Neural networks are a machine learning algorithm which has proven to be particularly powerful. A neural network is build of layers which are defined by

A neural network consists of L such layers, i.e.

The parameters of the neural networks,

are determined by minimizing a certain loss function

L by gradient descent (see (7) for the particular loss function used in this work). It is important to emphasize that the number of parameters are typically large (of order 103−106 for typical modern neural networks). It is therefore clear that one cannot determine the gradient by finite-difference (as we would need calculate the finite difference ratio for each of these parameters which is prohibitively expensive).

The basic idea for calculating the gradient ∇WL is to use the fact that we know the functional form of the neural network: the gradient of the loss is given by

Each term in this expression is known, for example

For a fixed non-linearity, we know the analytical form of the derivative σ′. This observation leads to the following algorithm: we first perform a forward pass of the neural network, i.e. starting from the input x, we calculate the activations yl for each layer and store them in memory. This process ends with the final activation yL which is, by definition, the output of the neural network. The gradient of each layer ∂yl+1∂yl=σ′(yl)Wl can then directly be calculated (as we have stored the activation yl). Crucially, we only need the matrix product of these Jacobians and it is efficient to start by calculating the gradient with respect to the output layer L, then the layer L−1 and so forth. This is because the loss function has a scalar output value and therefore the matrix product of the Jacobians

is a vector with the same number of components as

yl. We can therefore save memory by simply overwriting the stored activation yl. This algorithm is called backpropagation and allows us to calculate the gradient ∇WL for roughly the same cost as a forward pass of the neural network.

Let C(ϕ)=S(ϕ)+lnq(ϕ). The following relation between the KL divergence and the variance of C holds:

where w(ϕ)=p(ϕ)q(ϕ) is the normalized importance weight.

The expectation value of the normalized importance weight is

We now relate this expression to the variance of C. To this end, we first observe that C=−ln~w, where ~w=exp(−S)/q is the unnormalized importance weight. We then rewrite the expectation value of C as

where the last step uses the expansion for the KL divergence derived above. It then follows its variance is given by

Expanding the logarithm around Eq[w]=1 again, we obtain

Combining this expression with the expansion derived for the KL divergence, we obtain the claim of the theorem. ∎

q≈p and thus w≈1. Thus, the variance of C will become small. We indeed observe this behaviour in our numerical experiments, see Figure 3 for an example.

The action of the scalar field theory is given by

We want to calculate the partion function

which for vanishing hopping parameter κ decouples in independent integrals of each lattice site of the lattice Λ:

The partition function can then be calculated analytically using the integral

where Kn is the modified Bessel function of the second kind. Using this formula, we obtain the following analytic form of the free energy

where we have defined

This result corresponds to the zeroth order of the hopping expansion Gattringer and Lang (2009) of the partition function Z and one may, in principle, also calculate higher-order corrections. However, they are not needed for our purposes.

The estimator for the free energy is given by

Let ^XN=1N∑Ni=1Xi be the sample mean of independent and identically distributed random variables Xi with E[X2k+2i]<∞ for k∈{0,1}. Let h be a real-valued function with uniformly bounded derivatives. It then holds that

The application of the delta method to the free energy estimator ^F is, in practise, subject to a subtlety regarding the bounded differentiablity of the function h. We will ignore this subtlety in the following and return to it at the end of the section.

The bias of ^F is given by

Using the delta method for moments, we derive that

where we have used that h(x)=ln(x) has second derivative h′′(x)=−1x2. The proof then concludes by observing that

The variance of ^F is given by

The variance can be written as

We now evaluate both terms on the right-hand-side individually using the delta method. For the first term, we use the delta method with h(x)=(lnx)2 which has second derivative

Using this expression, we then obtain that Eq[(ln^Z)2] is equal to

For the squared expectation value, we use the expansion (17) derived in the proof for the bias. This gives that (Eqln^Z)2 is equal to

Subtracting these two expressions, it then follows

and the proof concludes by observing that Z=Eq[~w]. ∎

A few remarks are in order: from the theorems, it follows that the standard deviation of the estimator

^F is of order O(1/√N). In the large N limit, we can therefore neglect the bias correction as it is of order O(N−1). Furthermore, we can replace the expectation values in the theorems by the sample mean up to (negligible) higher-order corrections. In practise, we therefore use these results to estimate the variance and bias of ^F. Alternatively, one can use a standard Jackknife analysis to estimate variance and bias (see for example Gattringer and Lang (2009)). In our experiments, we use both methods to estimate the errors and check that they lead to consistent results. Lastly, we remark that error estimators for general observables involving the partition function can be derived, see Nicoli et al. (2020).

As mentioned above, the delta method requires that the derivatives of the function h are (uniformly) bounded. For a generic LQFT, this will not be the case for h(x)=ln(x) since its derivatives diverge for x→0+. To the best of our knowledge, the same problem will generically arise in the context of variational inference but seems to have not been discussed in the literature.

To address this subtlety, one could require that the action of the lattice quantum field theory is bounded. For example, this can be ensured by putting the field theory in a box potential. Since only very high energy configurations are affected by this (for suitably large choice of the box potential) and since these configurations are extremely unlikely to be sampled, this modification will have no practical effect on the numerical experiments. After this modification, ^Z is bounded from below and h(n)(^Z) is also bounded as a result.

More rigorously, the result for the variance can be derived without assumptions on a bound for the derivatives by using the delta method for in law approximation which takes the following form

Let ^XN=1N∑Ni=1Xi be the sample mean of independent and identically distributed random variables Xi with E[Xki]<∞ for k∈{1,2}. Let h be a differential function at μ=Eq[X]. Then

For a proof, we again refer to Bickel and Doksum (2015), see Theorem 5.3.3. Applying this theorem to the free energy estimator −β^F=ln^Z, we obtain the same expression for its variance as derived above. However, the theorem does not require any bound on the derivatives of h(x)=ln(x).

As explained in the main text, the free energy difference ΔFeb is calculated in steps

In this appendix, we will analyze the dependency of our results on the chosen steps.

We start from an initial step size corresponding to a change in hopping parameter κ of δκ=0.05. Between κ=0.2 and κ=0.3, we however take a finer step size of δκ=0.01. Since we are interested in the free energy difference ΔFeb between κb=0.0 and κe=0.3, this corresponds to running K=14 Markov chains. We focus on the 16×8 lattice and use an overelaxed HMC algorithm to sample 400k configurations for each chain. The overrelaxation is performed every 10 steps.

We then repeatedly refine the step size in a certain subregion around the critical κ value. The details can be found in Table 1.

have sufficient overlap, we also estimate ZiZi+1 by exchanging pi with pi+1 in the relation above. We then check that this leads to compatible results, see Figure 6. We note that this consistency check is relatively cheap as it requires running one additional Markov chain.

We also study the dependence of the integrated autocorrelation of the free energy on this refinement procedure, see Figure 4.

We use a HMC algorithm with overrelaxation. Each Markov chain has 5k thermalization steps followed by 400k estimation steps. The sign of the field configuration is flipped every ten steps.

For every lattice, we use a normalizing flow with six coupling layers. Each coupling layer (5) has neural network m with five fully-connected layers with no bias and Tanh non-linearities. The hidden layers of m

consist of 1000 neurons each. We train the flow for 1M steps using an 8k mini-batch. We use ReduceLROnPlateau learning rate scheduler of PyTorch with an initial learning rate of

As described in the main text, for HMC-based estimation we use a step size of δκ=0.01 for κ∈[0.2,0.3] and a step size of δκ=0.05 for all other values of the hopping parameter. As a result 14 Markov chains are run. In total, the HMC-based method therefore uses 14×400k=5.6M configurations. We use the same number of samples for the flow-based estimation. For efficiency, we sample these configurations in mini-batches of 3k samples.

we use both the uwerr Wolff et al. (2004) and jackknife method to estimate uncertainties for HMC. In order to deal with autocorrelation for jackknife, we perform binning with a 1k bin size. Error estimation for flow is performed by the delta method and also by jackknife, see Figure 7.

From the free energy estimates, one can then derive other thermodynamic observables such as the entropy. We refer to the main text for a discussion of this. Figure 8 shows estimation of entropy. Errors were estimated using both the Jackknife and uwerr method. Both error analysis methods lead to consistent results.