On Embedding De Bruijn Sequences by Increasing the Alphabet Size 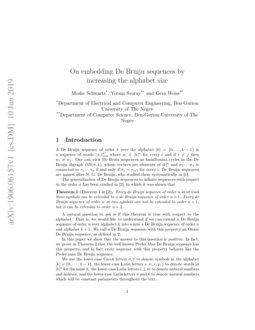 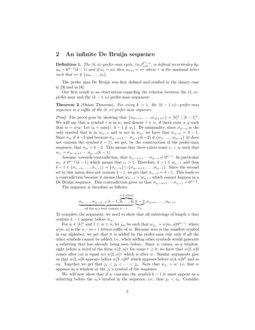 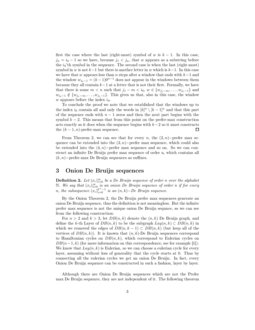 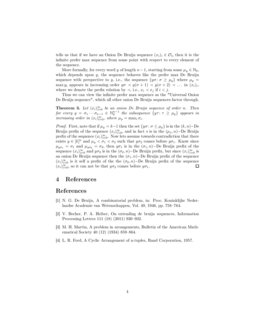 A circular de Bruijn sequence of order n in an alphabet of k symbols is ...
Verónica Becher, et al. ∙

A Cycle Joining Construction of the Prefer-Max De Bruijn Sequence

It is well known that the length of a beta-reduction sequence of a simpl...
Kazuyuki Asada, et al. ∙

An Information-Theoretical Analysis of the Minimum Cost to Erase Information

A key result in computational 3-manifold topology is that any two triang...
Benjamin A. Burton, et al. ∙

One of the fundamental ways to construct De Bruijn sequences is by using...
Gal Amram, et al. ∙

SEQUITUR is an algorithm that infers a hierarchical structure from a seq...
C. G. Nevill-Manning, et al. ∙

A De Bruijn sequence of order k over the alphabet [k]={0,…,k−1} is a sequence of words (xi)kni=0 where wi∈[k]n for every i and if i≠j then wi≠wj. One can view De Bruin sequences as hamiltonian cycles in the De Bruijn digraph DB(n,k), whose vertices are elements of [k]n and σ1⋯σn is connected to τ1⋯τn if and only if σi=τi+1 for every i. De Bruijn sequences are named after N. G. De Bruijn, who studied them systematically in [1].

The generalization of De Bruijn sequences to infinite sequences with respect to the order n has been studied in [2], in which it was shown that

The prefer max De Bruijn was first defined and studied in the binary case in [3] and in [4].

The sequence is therefore as follows:

To complete the argument, we need to show that all substrings of length n that contain k−1 appear before σi0.

We will now show that if w contains the symbol k−1 it must appear as a substring before the i0’s symbol in the sequence, i.e., that j1<i0. Consider first the case where the last (right-most) symbol of w is k−1. In this case, jn=i0−1 so we have, because j1<jn, that w appears as a substring before the i0’th symbol in the sequence. The second case is when the last (right-most) symbol in w is not k−1 but there is another letter in w which is k−1. In this case we have that w appears less than n steps after a window that ends with k−1 and the window wi0−1=(k−1)0n−1 does not appear in the windows between them because they all contain k−1 at a letter that is not their first. Formally, we have that there is some m<n such that j1−m<i0, w∈{wj1−m,…,wj1−1} and wi0−1∉{wj1−m,…,wj1−1}. This gives us that, also in this case, the window w appears before the index i0.

To conclude the proof we note that we established that the windows up to the index i0 contain all and only the words in [k]n∖[k−1]n and that this part of the sequence ends with n−1 zeros and then the next part begins with the symbol k−2. This means that from this point on the prefer-max construction acts exactly as it does when the sequence begins with k−2 so it must constructs the (k−1,n)-prefer-max sequence. ∎

For n>2 and k>3, let DB(n,k) denote the (n,k) De Bruijn graph, and define the k-th Layer of DB(n,k) to be the subgraph Lay(n,k)⊂DB(n,k) in which we removed the edges of DB(n,k−1)⊂DB(n,k) (but keep all of the vertices of DB(n,k)). It is known that (n,k)-De Bruijn sequences correspond to Hamiltonian cycles on DB(n,k), which correspond to Eulerian cycles on DB(n−1,k) (for more information on this correspondence, see for example [1]). We know that Lay(n,k) is Eulerian, so we can choose a eulerian cycle for every layer, assuming without loss of generality that the cycle starts at 0. Thus by connecting all the eulerian cycles we get an onion De Bruijn. In fact, every Onion De Bruijn sequence can be constructed in such a fashion, layer by layer.

More formally, for every word y of length n−1, starting from some μy∈N0, which depends upon y, the sequence behaves like the prefer max De Bruijn sequence with perspective to y, i.e., the sequence {yσ:σ≥μy} where μy=maxyi appears in increasing order yσ≺y(σ+1)≺y(σ+2)≺… in (xi)i, where we denote the prefix relation by ≺, i.e., xi≺xj if i<j.

Let (xi)∞i=0 be an onion De Bruijn sequence of order n. Then for every y=σ1⋯σn−1∈Nn−10 the subsequence {yτ:τ≥μy} appears in increasing order in (xi)∞i=0, where μy=maxiσi.