On Domination Coloring in Graphs 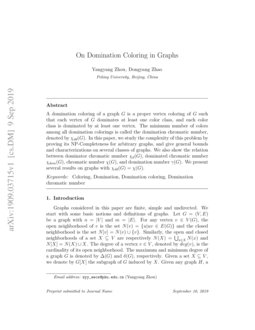 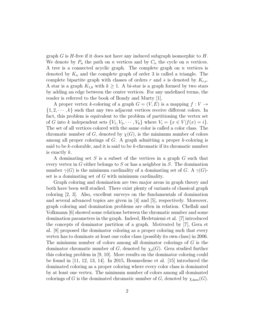 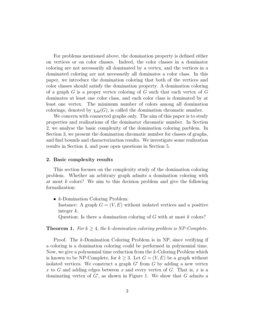 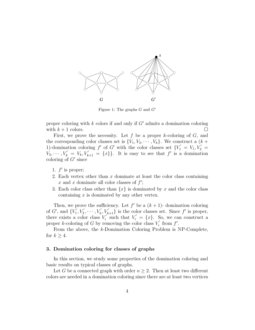 Graphs considered in this paper are finite, simple and undirected. We start with some basic notions and definitions of graphs. Let G=(V,E) be a graph with n=|V| and m=|E|. For any vertex v∈V(G), the open neighborhood of v is the set N(v)={u|uv∈E(G)} and the closed neighborhood is the set N[v]=N(v)∪{v}. Similarly, the open and closed neighborhoods of a set X⊆V are respectively N(X)=⋃x∈XN(x) and N[X]=N(X)∪X. The degree of a vertex v∈V, denoted by deg(v), is the cardinality of its open neighborhood. The maximum and minimum degree of a graph G is denoted by Δ(G) and δ(G), respectively. Given a set X⊆V, we denote by G[X] the subgraph of G induced by X. Given any graph H, a graph G is H-free if it does not have any induced subgraph isomorphic to H. We denote by Pn the path on n vertices and by Cn the cycle on n vertices. A tree is a connected acyclic graph. The complete graph on n vertices is denoted by Kn and the complete graph of order 3 is called a triangle. The complete bipartite graph with classes of orders r and s is denoted by Kr,s. A star is a graph K1,k with k≥1. A bi-star is a graph formed by two stars by adding an edge between the center vertices. For any undefined terms, the reader is referred to the book of Bondy and Murty Bondy and Murty (2008).

A proper vertex k-coloring of a graph G=(V,E) is a mapping f:V→{1,2,⋯,k} such that any two adjacent vertices receive different colors. In fact, this problem is equivalent to the problem of partitioning the vertex set of G into k independent sets {V1,V2,⋯,Vk} where Vi={x∈V|f(x)=i}. The set of all vertices colored with the same color is called a color class. The chromatic number of G, denoted by χ(G), is the minimum number of colors among all proper colorings of G. A graph admitting a proper k-coloring is said to be k-colorable, and it is said to be k-chromatic if its chromatic number is exactly k.

Graph coloring and domination are two major areas in graph theory and both have been well studied. There exist plenty of variants of classical graph coloring Chen and Schelp (1998); Malaguti and Toth (2010). Also, excellent surveys on the fundamentals of domination and several advanced topics are given in Haynes et al. (1998) and Haynes et al. (1998), respectively. Moreover, graph coloring and domination problems are often in relation. Chellali and Volkmann Chellali and Volkmann (2004) showed some relations between the chromatic number and some domination parameters in the graph. Indeed, Hedetniemi et al. Hedetniemi et al. (2009) introduced the concepts of dominator partition of a graph. Motivated by Hedetniemi et al. (2009), Gera et al. Gera et al. (2006) proposed the dominator coloring as a proper coloring such that every vertex has to dominate at least one color class (possibly its own class) in 2006. The minimum number of colors among all dominator colorings of G is the dominator chromatic number of G, denoted by χd(G). Gera studied further this coloring problem in Gera (2007a, b). More results on the dominator coloring could be found in Chellali and Maffray (2012); Merouane and Chellali (2012); Arumugam et al. (2012); Guillaume et al. (2017). In 2015, Boumediene et al. Merouane et al. (2015) introduced the dominated coloring as a proper coloring where every color class is dominated by at least one vertex. The minimum number of colors among all dominated colorings of G is the dominated chromatic number of G, denoted by χdom(G).

For k≥4, the k-domination coloring problem is NP-Complete.

Proof. The k-Domination Coloring Problem is in NP, since verifying if a coloring is a domination coloring could be performed in polynomial time. Now, we give a polynomial time reduction from the k-Coloring Problem which is known to be NP-Complete, for k≥3. Let G=(V,E) be a graph without isolated vertices. We construct a graph G′ from G by adding a new vertex x to G and adding edges between x and every vertex of G. That is, x is a dominating vertex of G′, as shown in Figure 1. We show that G admits a proper coloring with k colors if and only if G′ admits a domination coloring with k+1 colors. □

From the above, the k-Domination Coloring Problem is NP-Complete, for k≥4.

3 Domination coloring for classes of graphs

In this section, we study some properties of the domination coloring and basic results on typical classes of graphs.

Let G be a graph without isolated vertices, then

The bound of Proposition 1 is tight for complete graphs. Since every planar graph is 4-colorable Appel and Haken (1976), the following is straightforward:

Let G be a planar graph without isolated vertices, then χdd(G)≤4γ(G).

and the corresponding proper colorings are also domination colorings, the result follows. □

Let G be a connected graph with order n. Then χdd(G)=n if and only if G=Kn for n∈N.

Let G be a connected graph with χdd(G)=n. Suppose that G≠Kn. Thus, there exist at least two vertices, say x and y, such that they are not adjacent in G. Now, we define a coloring of G in which x and y receive the same color, and each of the remaining vertices receive a unique color. This is a domination coloring, so χdd(G)≤n−1, a contradiction. Thus, G=Kn, and we obtain the result. □

Let G be a connected graph with order n and maximum degree Δ, then χdd(G)≥nΔ.

Proof. Consider a minimum domination coloring of G. Since G is SΔ+1-free, any color class would not have more than Δ vertices; otherwise, a vertex dominating such color class will induce a star of order at least Δ+2, a contradiction. So, χdd(G)≥nΔ. □

Proof. Consider a minimum dominating set S of G. Color every vertex of S with a new color. Since G does not contain any triangle, the set of neighbors of every vertex of S is an independent set. So, a second new color is given for each neighborhood. Obviously, this is a proper coloring of G with 2|S| colors, which satisfies that every vertex dominates at least one color class, and every color class is dominated by at least one vertex. Thus, χdd(G)≤2γ(G). □

For any graph G, we have χdd(G)≥χ(G). In this section, we investigate graphs for which χdd(G)=χ(G).

Proof. Let G be a connected graph of order n with γ(G)=1. It then follows that K1,n−1 is a spanning subgraph of G. Let v be a vertex of degree n−1 in G. Since v is adjacent to all the vertices of V(G) v, a minimum coloring of G uses χ(G−v)+1 colors. Also, this coloring is also a domination coloring of G, where each vertex dominates the color class of v, the color class v is dominated by any other vertex and each of other color classes is dominated by v. So, χdd(G)≤χ(G), and then χdd(G)=χ(G). □

Let G be a connected unicyclic graph. Then χdd(G)=χ(G) if and only if G is isomorphic to C3 or C4 or C5 or the graph obtained from C3 by attaching any number of leaves at one vertex of C3.

Proof. For the sufficiency, the result is obvious if G is the graph meet conditions. We consider only the necessity. Let G be a connected unicyclic graph with χdd(G)=χ(G), and C the unique cycle of G.

Case 2.1. If |C|=3, then G is isomorphic to C3 or the graph obtained from C3 by attaching any number of leaves at exactly one vertex of C3.

Case 2.2. Suppose that |C|≥5. If there exists a support vertex x on C, then there exists a χdd-coloring {V1,V2,{x}} of G such that V1 contains all the leaves of x. Now, we get two vertices u and v on C, such that u∈V1,v∈V2, both u and v are not adjacent to x. Clearly, v does not dominate any color class and the color class V1 does not be dominated by any vertex, which is a contradiction. Thus, G has no support vertices and G=C. By Theorem 2(2), G=C5. So, the theorem follows. □

For the complete graph Kn, we know that χdd(Kn)=χ(Kn)=n. Next, we construct a family of graphs by attaching leaves at some vertices of the complete graph. We denote Kmn the family of graphs obtained by attaching leaves at m vertices of Kn, 1≤m≤n. We take no account of the number of leaves attached at any vertex in the notation, since it does not impact the domination chromatic number. Morever, we denote any element in Kmn by Kmn. For example, a instance of K25 is shown in Figure 4.

Proof. For any 1≤m≤n, Kmn is n-colorable. So, χ(Kmn)=n. Next, we consider a domination coloring of Kmn. On one hand, each vertex attached leaves should be partitioned into a singleton color class, since each of these leaves has to dominate a color class formed by its only neighbor. On the other hand, leaves attached to different vertices have to be partitioned into different color classes, otherwise, there exist no vertex dominating the color class. Thus, at most ⌊n2⌋ vertices can be attached leaves of Kn, in order to guarantee that Kmn is n-domination colorable. The result follows. □

The following are some interesting problems for further investigation.

The authors acknowledge support from Peking University. The authors also would like to thank referees for their useful suggestions.