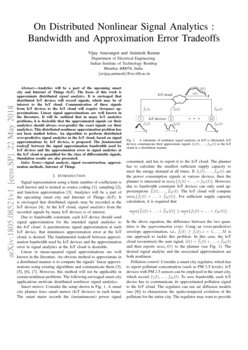 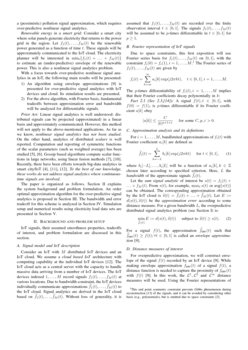 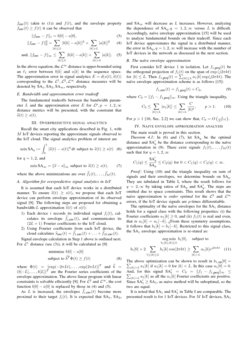 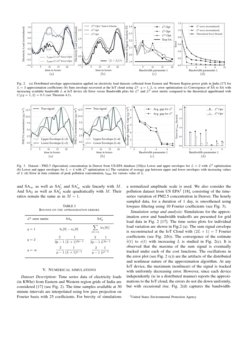 Signal representation using a finite number of coefficients is well known and is termed as source coding [1], sampling [2], and function approximation [3]. Analytics will be a part of the upcoming smart city and Internet of Things (IoT). It is envisaged that distributed signals may be recorded at the IoT devices [4]. At the IoT cloud, signal analytics from the recorded signals by many IoT devices is of interest.

Linear or mean-squared signal approximations are well known in the literature. An obvious method to approximate in a distributed manner is to compute the signals’ linear approximations using existing algorithms and communicate them [3, 5, 6, 7]. However, this method will not be applicable in certain nonlinear problems. The following envisaged smart city applications motivate distributed nonlinear signal analytics.

Smart meters: Consider the setup shown in Fig. 1. A smart city planner fixes smart meters (IoT devices) in each home. The smart meter records the (instantaneous) power signal consumed, and has to report it to the IoT cloud. The planner has to calculate the smallest sufficient supply capacity to meet the energy demand at all times. If f1(t),…,fM(t) are the power consumption signals at various devices, then the planner is interested in maxt{f1(t)+…+fM(t)}. However, due to bandwidth constraint IoT devices can only send approximations ˆfi(t),…,ˆfM(t). The IoT cloud will compute maxt{ˆf1(t)+…+ˆfM(t)}. For sufficient supply capacity calculation, it is required that

In the above equation, the difference between the two quantities is the approximation error. Using an (over-predictive) envelope approximation, i.e., ˆfi(t)≥fi(t),i=1,…,M is one approach to tackle this problem. In this case, the IoT cloud reconstructs the sum signal, ˆs(t)=ˆf1(t)+…+ˆfM(t) and then reports maxtˆs(t) to the planner (see Fig. 1). The desired signal analytic and the associated approximation are both nonlinear.

Pollution control: Consider a smart city regulator, which has to report pollutant concentration (such as PM 2.5 levels). IoT devices with PM 2.5 sensors can be employed in the smart city, which record f1(t),…,fM(t). To save bandwidth, each IoT device has to communicate its approximated pollution signal to the IoT cloud. The regulator can use air diffusion models (see [8]) to characterize the spatio-temporal evolution of the pollutant for the entire city. The regulator may want to provide a (pessimistic) pollution signal approximation, which requires over-predictive nonlinear signal analytics.

Renewable energy in a smart grid: Consider a smart city where solar panels generate electricity that returns to the power grid in the region. Let f1(t),…,fM(t) be the renewable power generated as a function of time t. These signals will be approximately communicated to the IoT cloud. The electricity planner will be interested in mint{f1(t)+…+fM(t)}

to estimate an (under-predictive) envelope of the renewable power. This is also a nonlinear signal analytics problem.

With a focus towards over-predictive nonlinear signal analytics in an IoT, the following main results will be presented:

Prior Art: Linear signal analytics is well understood: distributed signals can be projected (approximated) in a linear basis and approximately communicated. However, this method will not apply to the above-mentioned applications. As far as we know, nonlinear signal analytics has not been studied. On the other hand, analytics of distributed scalars is well reported. Computation and reporting of symmetric functions of the scalar parameters (such as weighted average) has been studied [5, 6]. Gossip based algorithms compute scalar functions in large networks, using linear fusion methods [7, 10]. Recently, there have been efforts towards big-data analytics in smart city/IoT [4, 11, 12]. To the best of our knowledge, these works do not address signal analytics where continuous-time signals are involved.

The paper is organized as follows. Section II explains the system background and problem formulation. An order optimal approximation algorithm for the over-predictive signal analytics is proposed in Section III. The bandwidth and error tradeoff for this scheme is analyzed in Section IV. Simulation setup and numerical results using electricity load data sets are presented in Section V.

IoT signals, their assumed smoothness properties, tradeoffs of interest, and problem formulation are discussed in this section.

Consider an IoT with M distributed IoT devices and an IoT cloud. We assume a cloud based IoT architecture with computing capability at the individual IoT devices [12]. The IoT cloud acts as a central server with the capacity to handle massive data arriving from a number of IoT devices. The IoT devices indexed 1,…,M record signals f1(t),…,fM(t) at various locations. Due to bandwidth constraint, the IoT devices individually communicate approximations ˆf1(t),…,ˆfM(t) to the IoT cloud. Signal analytics are derived in the IoT cloud based on ˆf1(t),…,ˆfM(t). Without loss of generality, it is assumed that f1(t),…,fM(t) are recorded over the finite observation interval t∈[0,1]. The signals f1(t),…,fM(t) will be assumed to be p-times differentiable in t∈[0,1] for p≥1.

The p-times differentiability of fi(t),i=1,…,M implies that their Fourier coefficients decay polynomially in k:

Ii-C Approximation analysis and its definitions

where bi[−L],…,bi[L] will be a function of ai[k],k∈Z chosen later according to specified criterion. Here, L the bandwidth of the approximate signals ˆfi(t).

Let the sum signal analytic of interest be s(t)=f1(t)+…+fM(t). From s(t), for example, maxts(t) or avg{s(t)} can be obtained. The corresponding approximation obtained by the IoT cloud is ˆs(t)=ˆf1(t)+…+ˆfM(t). Let E:=d(s(t),ˆs(t)) be the approximation error according to some distance measure. For a given bandwidth L, the overpredictive distributed signal analytics problem (see Section I) is:

In the above equation, the L∞ distance is upper-bounded using an ℓ1 error between b[k] and a[k] in the sequence space. The approximation error in signal analytics E=d(s(t),ˆs(t)) corresponding to the L1,L2,L∞ distance measures will be denoted by SA1,SA2,SA∞, respectively.

The fundamental tradeoffs between the bandwidth parameter L and the approximation error E for Lp,p=1,2,∞ distance metrics will be presented, with the constraint that ˆs(t)≥s(t).

Recall the smart city applications described in Fig. 1, with M IoT devices reporting the approximate signals observed to the IoT cloud. The signal analytics problem of interest are

where the above minimizations are over ˆf1(t),…,ˆfM(t).

Signal envelope calculation in Step 1 above is outlined next. For L1 distance (see (3)), it will be calculated as [9]

are the Fourier series coefficients of the envelope approximation. The above linear program with linear constraints is solvable efficiently

As L is increased, the envelopes ˆfi,\footnotesize env(t) become more proximal to their target fi(t). It is expected that SA1, SA2, and SA∞ will decrease as L increases. However, analyzing the dependence of SAq,q=1,2,∞ versus L is difficult. Accordingly, naïve envelope approximation [15] will be used to analyze fundamental bounds on their tradeoff. Since each IoT device approximates the signal in a distributed manner, the error in SAq,q=1,2,∞ will increase with the number of IoT devices in the network as discussed in the next section.

The main result is proved in this section.

Proof: Using (10) and the triangle inequality on sum of signals and their envelopes, we determine bounds on SAq. They are tabulated in Table I, where the result follows for q=2,∞ by taking ratios of SAq and SA′q. The steps are omitted due to space constraints. This result shows that the naive approximation is order optimal for the L2 and L∞ errors, if the IoT device signals are p-times differentiable.

The optimality of the naïve envelopes for the SA1 distance holds for a signal class with the following properties: (i) the Fourier coefficients a1[k]≥0, and (ii) f1(t) is real and even, that is a1[k]=a1[−k]. ¿From these symmetry assumptions, it follows that b1[k]=b1[−k]. Restricted to this signal class, the SA1 envelope approximation is re-stated as:

It is noted that SA1 and SA′1 in Table I are comparable. The presented result is for 1 IoT devices. For M IoT devices, SA1 and SA∞ as well as SA′1 and SA′∞ scale linearly with M. And SA2 as well as SA′2 scale quadratically with M. Their ratios remain the same as in M=1.

). The time samples available at 30 minute intervals are interpolated using low pass projection on Fourier basis with 25 coefficients. For brevity of simulations a normalized amplitude scale is used. We also consider the pollution dataset from US EPA

Simulation setup and analysis: Simulations for the approximation error and bandwidth tradeoffs are presented for grid load data in Fig. 2 [17]. The time series plots for individual load variation are shown in Fig.2 (a). The sum signal envelope is reconstructed at the IoT Cloud with (2L+1)=7 Fourier coefficients (see Fig. 2(b)). The convergence of the estimate ˆs(t) to s(t) with increasing L is studied in Fig. 2(c). It is observed that the maxima of the sum signal is eventually tracked under each of the cost functions. The oscillations in the error plot (see Fig. 2 (c)) are the artifacts of the distributed and nonlinear nature of the approximation algorithm. At any IoT device, the maximum (nonlinear) of the signal is tracked with uniformly decreasing error. However, since each device independently (ie in a distributed manner) reports the approximations to the IoT cloud, the errors do not die down uniformly, but with occasional rise. Fig. 2(d) captures the bandwidth-error tradeoff for the three distance measures considered in the paper. The performance of the naïve approximation scheme is seen to coincide with that of the L∞ error optimization. This is attributed to the relaxation of the L∞ cost in terms of the coefficients as discussed in (5).

We analyze the gap between the upper and lower signal envelopes using the pollution dataset [18] (Fig. 3). We observe that the average gap between the envelopes decays with increasing value of L. It is to be noted that the lower envelope is negative in certain time intervals333This indicates the limitation of Fourier basis representation in capturing the signal for a generic signal class. Alternate basis representations such as polynomials or wavelets suitable for the signal class will be considered as future extensions.. In Fig. 3 (d) we analyze the error in time estimate of the peak pollutant concentration, t\scriptsize max. The estimates approach the true value of signal analytic (ie t\scriptsize max) eventually with growing bandwidth parameter L.

Energy consumption in IoT Device and IoT Cloud :By using IoT energy consumption data, a comparison of different IoT energy requirements are shown in Fig. 4 [19]. For a communication mode with Eb energy/bit requirement and Bc bits/coefficient, the proposed envelope scheme requires (2L+1)EbBc energy units per device. The computing energy requirement (see Fig. 2(d)) is determined by counting the number of floating point operations (FLOP) in MATLAB to execute the optimization algorithm at the device. The conversion of FLOP to equivalent Joules is performed with respect to a 100 GFLOP/sec/W processor (see TI C667x processor [20]). It is observed that the communication and computation energy expenditure is observed to linear increase with the number of approximation coefficients.