On discrimination between classes of distribution tails

We propose the test for distinguishing between two classes of distribution tails using only the largest order statistics of the sample and state its consistency. We do not assume belonging the corresponding distribution functions to any maximum domain of attraction. 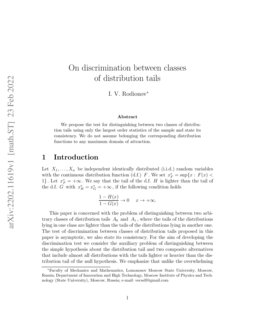 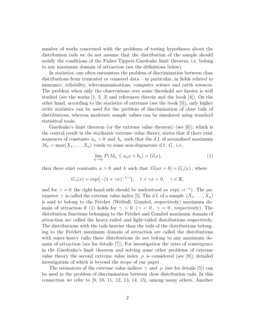 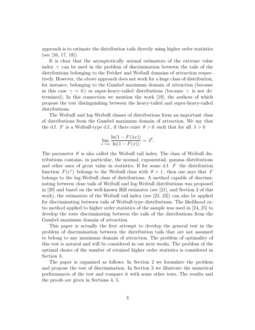 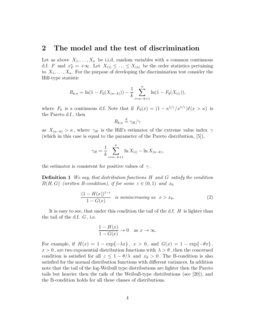 In this paper, we have obtained the total chromatic as well as equitable...
S. Prajnanaswaroopa, et al. ∙

Learning from a limited number of samples is challenging since the learn...
Shuo Yang, et al. ∙

Trajectory prediction is confronted with the dilemma to capture the mult...
Guangyi Chen, et al. ∙

In statistics, one often encounters the problem of discrimination between close distributions from truncated or censored data – in particular, in fields related to insurance, reliability, telecommunications, computer science and earth sciences. The problem when only the observations over some threshold are known is well studied (see the works [1, 2, 3] and references therein and the book [4]). On the other hand, according to the statistics of extremes (see the book [5]), only higher order statistics can be used for the problem of discrimination of close tails of distributions, whereas moderate sample values can be simulated using standard statistical tools.

Gnedenko’s limit theorem (or the extreme value theorem) (see [6]), which is the central result in the stochastic extreme value theory, states that if there exist sequences of constants an>0 and bn such that the d.f. of normalized maximum Mn=max(X1,…,Xn) tends to some non-degenerate d.f. G, i.e.,

then there exist constants a>0 and b such that G(ax+b)=Gγ(x), where

The estimators of the extreme value indices

It is clear that the asymptotically normal estimators of the extreme value index γ can be used in the problem of discrimination between the tails of the distributions belonging to the Fréchet and Weibull domains of attraction respectively. However, the above approach does not work for a huge class of distribution, for instance, belonging to the Gumbel maximum domain of attraction (because in this case γ=0) or super-heavy-tailed distributions (because γ is not determined). In this connection we mention the work [19], the authors of which propose the test distinguishing between the heavy-tailed and super-heavy-tailed distributions.

is also called the Weibull tail index. The class of Weibull distributions contains, in particular, the normal, exponential, gamma distributions and other ones of great value in statistics. If for some d.f.

This paper is actually the first attempt to develop the general test in the problem of discrimination between the distribution tails that are not assumed to belong to any maximum domain of attraction. The problem of optimality of this test is natural and will be considered in our next works. The problem of the optimal choice of the number of retained higher order statistics is considered in Section 3.

The paper is organized as follows. In Section 2 we formulate the problem and propose the test of discrimination. In Section 3 we illustrate the numerical performances of the test and compare it with some other tests. The results and the proofs are given in Sections 4, 5.

2 The model and the test of discrimination

Let as above X1,…,Xn be i.i.d. random variables with a common continuous d.f. F and x∗F=+∞. Let X(1)≤…≤X(n) be the order statistics pertaining to X1,…,Xn. For the purpose of developing the discrimination test consider the Hill-type statistic

as X(n−k)>κ, where γH is the Hill’s estimator of the extreme value index γ (which in this case is equal to the parameter of the Pareto distribution, [5]),

the estimator is consistent for positive values of γ.

We say, that distribution functions H and G satisfy the condition B(H,G) (written B-condition), if for some ε∈(0,1) and x0

, are two exponential distribution functions with

λ>θ, then the concerned condition is satisfied for all ε≤1−θ/λ and x0>0

[20]), and the B-condition holds for all these classes of distributions.

Let us formulate the main problem of our paper. Consider two distribution classes A0 and A1 such that the tails of the distributions lying in A0 are lighter than the distribution tails lying in A1. Assume, that there exist the “separating” d.f. F0 such that both of the conditions B(G,F0) and B(F0,H) are satisfied with some (may be, different) ε and x0 for all G∈A0 and H∈A1. Consider in details the examples of fulfilment of these conditions.

We can select F0(x)=(1−exp{−exp{(lnx)1/2}})I(x>1) as the separating function in the problem of discrimination between distributions with the Weibull and log-Weibull tails. Indeed, we can represent the Weibull-type d.f. in the form

whereas the log-Weibull-type d.f. can be represented as

hence the fulfilment of the B-conditions is required.

Thus, suppose that two classes A0 A1 of distributions are separable by the function F0. Consider the null hypothesis ~H0:F∈A0 and the alternative ~H1:F∈A1. Propose the following procedure testing the hypothesis ~H0:

According to the corollary of Theorem 2 (see below), the proposed test is consistent against the alternative ~H1 and has the asymptotic significance level α, here u1−α

is the quantile of the corresponding level of a standard normal distribution.

The aim of the present simulation study is to illustrate the use of the proposed test and to demonstrate its asymptotic properties. Firstly consider the problem of discrimination between the Weibull and log-Weibull classes of distribution tails applying the proposed test (3), and we select the following separating function F0(x)=(1−exp(−exp(√lnx)))I(x>1). As it follows from Theorem  2, the statistics √k(Rk,n−1)

converges in probability to

Empirical type I error probabilities and empirical power of the test (

3) discriminating between the Weibull and log-Weibull classes for different distributions with the separating function F0(x)=(1−exp(−exp(√lnx)))I(x>1) are given in Table 1 (the nominal level α=0.05). We include the simulation results for the log-Weibull distribution LW(3,1) with the d.f. FLW(x)=(1−exp(−(lnx)3))I(x>1)

, the log-normal distribution with parameters

, so we do not include these probabilities in the Table 1. In addition, as an example we include the empirical power of the test for Pareto distribution with the parameter 2 and standard Cauchy distribution.

Now consider the problem of discrimination between the hypothesis H0:θ<2 and the alternative H1:θ>2, where θ is the Weibull-tail index. Let us compare the test (3) (we select as a separating function F0(x) the standard normal d.f.), and the test proposed in work [20] (see in addition [26]

). If we select the sample from the standard normal distribution, then the limit distributions of both the test statistic (

3) and the test statistic proposed in [20] is standard normal (see the second plot in Fig. 2).

The problem of selecting the number of retained order statistics for constructing the estimators and tests is significant, but one of the most complicated in statistics of extremes (see the book [27] and references therein). In the context of the problem of distinguishing between heavy-tailed and super-heavy-tailed distributions consider the behavior of the empirical type I error probability and empirical power of the test (4) with the separating function F0(x)=1−exp(−√lnx) as k increases (see Fig. 3). We see, that with the level 0.05 the optimal value of k lies between 50 and 150.

This section discusses theoretical properties of the test proposed in Section 2. As before, X1,…,Xn are i.i.d. random variables with the continuous d.f. F. Let Θ(F0) be the class of the continuous distribution functions F1 satisfying either B(F1,F0) or B(F0,F1). Consider the simple hypothesis H0:F=F0 (actually we check the hypothesis that F and F0 have the same tail) and the alternative H1:F∈Θ(F0). Note that if F0, F1 satisfy either B(F1,F0) or B(F0,F1) for some ε>0, then the same holds for all ε1, 0<ε1<ε. So set

Let us show, that the conditional distribution of the statistic Rk,n differs depending on whether H0 or H1 holds, that make it possible to propose the discrimination test of these hypotheses. The following results discusses the asymptotic behavior of the statistic Rk,n as k,n→∞, k<n, if H0 holds.

If H0 holds, then

The above theorem allows us to propose the test distinguishing hypotheses H0 and H1 for the tail of the d.f. F:

where uα/2 and u1−α/2 are quantiles of the corresponding levels of the standard normal distribution. It is easy to see, that the test is asymptotical with the significance level α.

Theorems 1, 2 justify the correctness of the statistical procedure proposed in (3). Consider two classes A0 and A1 of distribution tails. Consider the null hypothesis ~H0:F∈A0 and the alternative ~H1:F∈A1. Suppose that there exist such d.f. F0, that the conditions B(G,F0) and B(F0,H) are satisfied with some (may be different) ε and x0 for arbitrary distribution functions G∈A0 and H∈A1.

. The procedure (3) testing the null hypothesis ~H0 has the asymptotical significance level α. Moreover, the test is consistent if ~H1 holds.

We say that distribution functions F and G satisfy the condition C(F,G), if for some ε>0 and x0

Let Θ′(F0) be the class of the continuous distribution functions F1 satisfying either C(F1,F0) or C(F0,F1) and the following condition: for some δ∈(0,1)

Since the statistic Rk,n depends only on higher order statistics of the sample, we cannot use directly the independence of the random variables (X1,…,Xn). So we consider the conditional distribution of the statistics Rk,n given X(n−k)=q with the help of the following result.

th order statistics. The joint distribution of the set of statistics

It is easy to check, that ηq≥0 for all q∈R. The crucial point in the proof of Theorem 2 is an investigation of the behavior of the random variable ηq.

Let Fq, Gq be the tail distribution functions associated with F and G respectively. Then

5.2 The proof of the proposition.

the result required. Let us prove the assertion in the opposite direction. Suppose that ηq is stochastically smaller than the standard exponential random variable, i.e. P(ηq≤y)≥1−e−y with y≥0. Using (8), we have

This observation ends the proof, since zF∈[q,∞). The proof of the second assertion of the item (ii) is similar.

has a uniform distribution on the interval

where E1,E2,… are independent standard exponential random variables. Therefore, the distribution of the left part does not depend on n and

Let us prove the item (i) at first. The scheme of the proof includes the steps that are similar to ones using in works [24, 25]. Consider the asymptotic behavour of the statistic Rk,n as n→∞. Denote

where {X∗i}ki=1 are i.i.d. random variables introduced in Lemma with the d.f.

Next, we see that

From the Lindeberg–Feller central limit theorem,