On directed homotopy equivalences and a notion of directed topological complexity 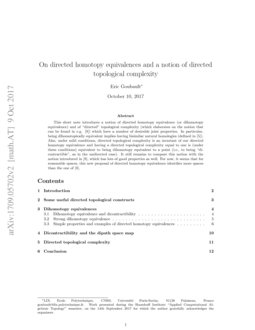 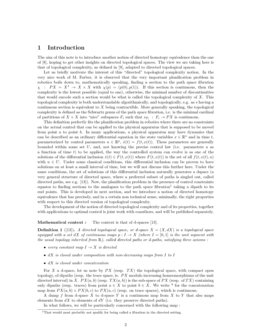 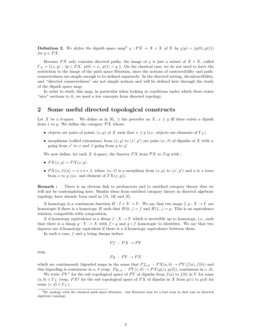 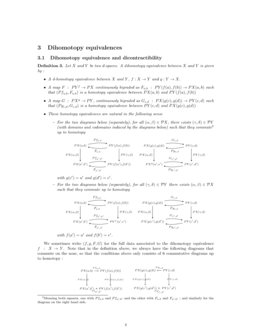 . In many applications, a physical apparatus may have dynamics that can be described as an ordinary differential equation in the state variables

x∈Rn and in time t, parameterized by control parameters u∈Rp, ˙x(t)=f(t,x(t)). These parameters are generally bounded within some set U, and, not knowing the precise control law (i.e. parameters u as a function of time t) to be applied, the way the controlled system can evolve is as one of the solutions of the differential inclusion ˙x(t)∈F(t,x(t)) where F(t,x(t)) is the set of all f(t,x(t),u) with u∈U. Under some classical conditions, this differential inclusion can be proven to have solutions on at least a small interval of time, but we will not discuss this further here. Under the same conditions, the set of solutions of this differential inclusion naturally generates a dspace (a very general structure of directed space, where a preferred subset of paths is singled out, called directed paths, see e.g. [13]). Now, the planification problem in the presence of control constraints equates to finding sections to the analogues to the path space fibration222

That would most probably not qualify for being called a fibration in the directed setting.

taking a dipath to its end points. This is developed in next section, and we introduce a notion of directed homotopy equivalence that has precisely, and in a certain non technical sense, minimally, the right properties with respect to this directed version of topological complexity.

The development of the notion of directed topological complexity and of its properties, together with applications to optimal control is joint work with coauthors, and will be published separately.

A directed topological space, or d-space X=(X,dX) is a topological space equipped with a set dX of continuous maps p:I→X (where I=[0,1] is the unit segment with the usual topology inherited from R), called directed paths or d-paths, satisfying three axioms :

For X a d-space, let us note by PX (resp. TX) the topological space, with compact open topology, of dipaths (resp. the trace space, ie. PX modulo increasing homeomorphisms of the unit directed interval) in X. PX(a,b) (resp. TX(a,b)) is the sub-space of PX (resp. of TX) containing only dipaths (resp. traces) from point a∈X to point b∈X. We write * for the concatenation map from PX(a,b)×PX(b,c) to PX(a,c) (resp. on trace spaces), which is continuous.

A dmap f from d-space X to d-space Y is a continuous map from X to Y that also maps elements from dX to elements of dY (i.e. they preserve directed paths).

In what follows, we will be particularly concerned with the following map :

We define the dipath space map333By analogy with the classical path space fibration - but fibration may be a bad term in that case in directed algebraic topology. χ:PX→X×X of X by χ(p)=(p(0),p(1)) for p∈PX.

Because PX only contains directed paths, the image of χ is just a subset of X×X, called ΓX={(x,y) | ∃p∈PX, p(0)=x, p(1)=y }. On the classical case, we do not need to force the restriction to the image of the path space fibration, since the notions of contractibility and path-connectedness are simple enough to be defined separately. In the directed setting, dicontractibility, and “directed connectedness” are not simple notions and will be defined here through the study of the dipath space map.

In order to study this map, in particular when looking at conditions under which there exists “nice” sections to it, we need a few concepts from directed topology.

Let X be a d-space. We define as in [6], ⪯ the preorder on X, x⪯y iff there exists a dipath from x to y. We define the category PX whose:

We now define, for each X d-space, the functor PX from PX to Top with :

A homotopy is a continuous function H:I×X→Y. We say that two maps f,g:X→Y are homotopic if there is a homotopy H such that H(0,_)=f and H(1,_)=g. This is an equivalence relation, compatible with composition.

In such a case, f and g being dmaps induce

Let X and Y be two d-spaces. A dihomotopy equivalence between X and Y is given by :

We sometimes write (f,g,F,G) for the full data associated to the dihomotopy equivalence f : X→Y. Note that in the definition above, we always have the following diagrams that commute on the nose, so that the conditions above only consists of 6 commutative diagrams up to homotopy :

This definition clearly bears a lot of similarities with Dwyer-Kan weak equivalences in simplicial categories (see e.g. [2]). The main ingredient of Dwyer-Kan weak equivalences being exactly that Pf induces a homotopy equivalence. But our definition adds continuity and “extension” or “bisimulation-like” conditions to it, which are instrumental to our theorems and to the classification of the underlying directed geometry.

There is an obvious notion of deformation diretract of X⊆Y, which is a dihomotopy equivalence r : Y→X such that the inclusion map from X to Y is the left homotopy inverse of r and r∘i=Id. But there seems to be no reason that in general, two dihomotopically equivalent spaces are diretracts of a third one (the mapping cylinder in the classical case). It may be true with a zigzag of diretracts though, as in [8].

A dicontractible directed space is a space for which there exists a directed deformation retract onto one of its points. Particularizing once again the definition above, we get :

Let X be a d-space. X is dicontractible if there is a continuous map R :{∗}→PX, continuously bigraded, such that Rc,d are homotopy equivalences (hence in particular, all path spaces of X are contractible).

Let X and Y be two d-spaces. A strong dihomotopy equivalence between X and Y is given by :

This commutes indeed with γ=Pfa′,a(α) and δ=Pfb,b′(β) because of property (a) of strong dihomotopy equivalence f.

Similarly, let (γ,δ)∈PY, property (c) of f implies that the following diagram commutes up to homotopy by taking α=Fa′,a(γ) and β=Fb,b′(δ)

And finally, property (b) implies that the following diagram commutes up to homotopy, by taking α=Pgc′,d′(γ) and β=Pgd,d′(δ)

Let X, Y be two directed spaces. Suppose there exists f : X→Y a dmap, which has an inverse, also a dmap. Then X and Y are directed homotopy equivalent.

Now, natural homology [5] is going to be an invariant of dihomotopy equivalence, as it should be :

Let X, Y be two directed spaces. Suppose X and Y are directed homotopy equivalent. Then X and Y have bisimilar natural homotopy and homology (in the sense of [8]).

The bisimulation relation we are looking for is the relation :

The diagrams defining the directed homotopy equivalence imply that R is hereditary with respect to extension maps. ∎

therefore F2rc,d is a homotopy inverse of Pf2c,d. Moreover, as a composition of maps Pf1c,d with F21c,d which are continuous in (c,d)∈PY, it is a continuously bigraded map on (c,d).

We also have to look at the map induced by g2. In the following diagram

Now, we use the fact that f2∘f1 is a dihomotopy equivalence, and we get a map (α,β)∈PZ such that the following diagram commutes up to homotopy

In the diagram above, F2c,d (represented as a dashed arrow) is actually the composite Pf1a,b∘F21c,d as shown before ; similarly, F2c′,d′ is the composite Pf1a′,b′∘F21c′,d′. Therefore we have the extension property needed for F2c,d. The five other diagrams can be proven in a similar manner, by pulling back or pushing forward the existence of maps using the diagrams for Pf1, Pg1, F1, G1 (resp. Pf2∘f1, Pg1∘g2, F21 and G12).

The unit segment is dicontractible. The wedge of two segments is dicontractible (which makes shows the version of dicontractibility discussed here to be notably different from that used in the framework of [8]). Note that in view of applications to directed topological complexity, this is coherent with the fact that directed topological complexity should be invariant under directed homotopy equivalence. For any two pair of points in Γ of directed segment or of a wedge of two segments, there is indeed a continuous map depending on this pair of points to the unique dipath going from one to the other.

The Swiss flag is not directed homotopy equivalent to the hollow square. This can be seen already using natural homology, that distinguishs the two, see e.g. [5].

More precisely, we consider the following d-spaces (SF on the left, HS on the right), coming from PV processes, which are subspaces of R2 and whose points are within the white part in the square (the grey part represents the forbidden states of the program) and whose dipaths are non decreasing paths for the componentwise ordering on R2. They are homotopy equivalent using the two maps (and even dmaps), f from SF to HS and g from HS to SF, depicted below (f is the map on the left) :

The points in light grey are the points which do not belong to the image of those maps. The problem is that those two programs are quite different: SF has a dead-lock in α and inaccessible states, while HC does not. Topologically, they do not have the same (directed) components in the sense of [11].

Let X be a d-space. X is said to be weakly dicontractible if its natural homotopy (equivalently, natural homology [5], by directed Hurewicz, all up to bisimulation) is the natural system - which we will denote by 11 - on 1 (the final object in Cat) with value Z on the object, in dimension 0 and 0 in higher dimensions.

The following is a direct consequence of Lemma 3 but we give below a simple and direct proof of it :

Suppose X is dicontractible. Therefore, by Definition 4, we have a continuous map R :{∗}→PX, continuously bigraded, which are are homotopy equivalences. All extension maps (γ,δ) induce identities modulo homotopy, trivially. Now, these diagrams of spaces induce, in homology, a diagram which has Z as value on objects for dimension 0, and 0 for higher dimensions. It is a simple exercise to see that such diagrams are bisimilar to the one point diagram which has only Z as value in dimension 0, and 0 in higher dimension. This shows weak dicontractibility. ∎

Suppose X is a contractible d-space. Then, the dipath space map has a continuous section if and only if X is dicontractible.

As X is contractible, we have f:X→{a0} (the constant map) and g:{a0}→X (the inclusion) which form a (classical) homotopy equivalence. Trivially, f and g are dmaps.

Suppose that we have a continuous section s of χ. There is an obvious inclusion map i :{s(a,b)}<span class="mjx-char MJXc-TeX-main-R" style="padding-top: 0.225em; padding-bottom: 0.37