On directed analogues of expander and hyperfinite graph sequences

We introduce and study analogues of expander and hyperfinite graph sequences in the context of directed acyclic graphs, which we call "extender" and "hypershallow" graph sequences, respectively. Our main result is a probabilistic construction of non-hypershallow graph sequences. 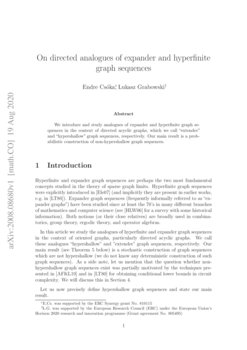 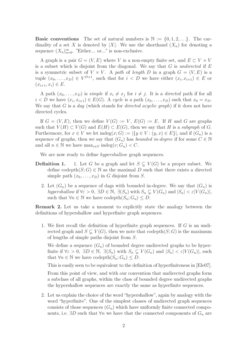 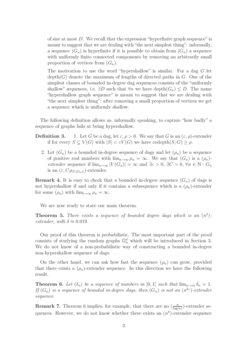 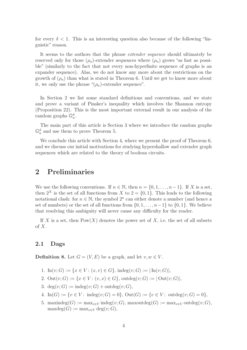 On Monotone Sequences of Directed Flips, Triangulations of Polyhedra, and Structural Properties of a Directed Flip Graph

In this paper, we present some rather basic and fundamental results on s...
Hang Si, et al. ∙

Submodularity on Hypergraphs: From Sets to Sequences

Egel – Graph Rewriting with a Twist

On lossy Compression of Directed Graphs

The method of types presented by Csiszar and Korner is a central tool us...
Ronit Bustin, et al. ∙

IPC: A Benchmark Data Set for Learning with Graph-Structured Data

Benchmark data sets are an indispensable ingredient of the evaluation of...
Patrick Ferber, et al. ∙

Hyperfinite and expander graph sequences are perhaps the two most fundamental concepts studied in the theory of sparse graph limits. Hyperfinite graph sequences were explicitly introduced in [MR2455943] (and implicitly they are present in earlier works, e.g. in [MR584516]). Expander graph sequences (frequently informally referred to as “expander graphs”) have been studied since at least the 70’s in many different branches of mathematics and computer science (see [MR2247919] for a survey with some historical information). Both notions (or their close relatives) are broadly used in combinatorics, group theory, ergodic theory, and operator algebras.

We are now ready to define hypershallow graph sequences.

Let us take a moment to explicitly state the analogy between the definitions of hypershallow and hyperfinite graph sequences.

The following definition allows us, informally speaking, to capture “how badly” a sequence of graphs fails at being hypershallow.

It is easy to check that a bounded in-degree sequence (Gn) of dags is not hypershallow if and only if it contains a subsequence which is a (ρn)-extender for some (ρn) with limi→∞ρn=∞.

We are now ready to state our main theorem.

There exists a sequence of bounded degree dags which is an (nδ)-extender, with δ≈0.019.

Our proof of this theorem is probabilistic. The most important part of the proof consists of studying the random graphs Gdn which will be introduced in Section 3. We do not know of a non-probabilistic way of constructing a bounded in-degree non-hypershallow sequence of dags.

On the other hand, we can ask how fast the sequence (ρn) can grow, provided that there exists a (ρn)-extender sequence. In this direction we have the following result.

Theorem 6 implies, for example, that there are no (nlog(n))-extender sequences. However, we do not know whether there exists an (nδ)-extender sequence for every δ<1. This is an interesting question also because of the following “linguistic” reason.

In Section 2 we list some standard definitions and conventions, and we state and prove a variant of Pinsker’s inequality which involves the Shannon entropy (Proposition 22). This is the most important external result in our analysis of the random graphs Gdn.

The main part of this article is Section 3 where we introduce the random graphs Gdn and use them to prove Theorem 5.

We conclude this article with Section 4, where we present the proof of Theorem 6, and we discuss our initial motivations for studying hypershallow and extender graph sequences which are related to the theory of boolean circuits.

We use the following conventions. If n∈N, then n={0,1,…,n−1}. If X is a set, then 2X is the set of all functions from X to 2={0,1}. This leads to the following notational clash: for n∈N, the symbol 2n can either denote a number (and hence a set of numbers) or the set of all functions from {0,1,…,n−1} to {0,1}. We believe that resolving this ambiguity will never cause any difficulty for the reader.

If f and g are random variables with values in the same space Y, with laws α and β respectively, then the law of f⊔g is α+β2.

Follows directly from the definitions. ∎

The main point of the following proposition is contained in its second item. Informally, it allows us to say the following: if f and g are N-valued random variables with laws α and β respectively, and (x,y)∈N2 is chosen according to the law α×β, then either it is roughly as probable that x>y as it is that y>x, or the entropy of f⊔g is substantially larger than the average of the entropies of f and g.

By the previous lemma we have that the law of f⊔g is γ:=α+β2. As such the first item follows from Jensen’s inequality.

Noting that ∥α−γ∥1=∥β−γ∥1, summing the two inequalities above gives

A direct computation shows that D(α∥γ)+D(β∥γ)=2H(γ)−H(α)−H(β), so together with the triangle inequality we deduce that

On the other hand, the left-hand side of (1) is equal to

which together with (2) finishes the proof. ∎

In this section we will describe a probabilistic construction of non-hypershallow sequences of dags. They will be in fact nδ-expander sequences for δ≈0.019.

We will construct a sequence of random graphs Gdn which asymptotically almost surely forms, after small modifications, an nδ-extender sequence. The graphs Gdn will be essentially defined as follows. The vertices are {1,2,...,n} and for every i<j, we add an edge (i,j) independently with probability proportional to 1j−i. In order to simplify the proof, we will slightly change the probabilities when we define Gdn in Subsection 3.2.

We start with the definition and discussion of depth functions in Subsection 3.1, as they provide a convenient way of characterising the property of being an (ε,ρ)-extender, which will be crucial in the analysis of the random graphs Gdn in Subsection 3.3.

Given a graph G and S⊂V(G), we can associate to it a function which “measures the maximal distance to S∪Out(G)”. More precisely we define δS:V(G)→N by setting δS(x) to be the maximal l∈N for which there exists a directed simple path x0,…,xl with x0=x, xl∈S∪Out(G), and xi∉S when 0<i<l. Let us start by abstracting some properties of δS into the notion of a depth function as follows.

Let G be a graph.

We will also make use of the following functions.

The following lemma is straightforward to verify directly from the definitions.

Let G be a graph and f be a depth function for G. Then there exists D⊂E(G) such that the following properties hold true.

and it is evident from the definition of δ′D that depth((V(G),D)) is equal to the maximal value of δ′D, which is bounded by ρ since δ′D=f. ∎

We finish by restating the above lemma for the case of graph sequences.

Let (Gn) be a bounded in-degree sequence of dags and let (ρn) be a sequence of positive real numbers with limn→∞ρn=∞. The following conditions are equivalent.

3.2 Definition and basic properties of the random graphs Gdn

In this paper a random graph is a pair (V,E) where V is a non-empty finite set and E is a random variable with values in Pow(V×V) such that E is disjoint from the diagonal in V×V almost surely.

The law of Jn will be denoted with ιn.

Now for d,n∈N we define a random graph Gdn as follows: we let V(Gdn):=Zn, and the random variable Edn with values in Pow(Zn×Zn) is defined by choosing dn elements of Zn×Zn independently at random according to the law ιn. This finishes the definition of Gdn.

Let us note that Gdn is typically neither a dag nor of bounded degree, but the following lemma implies that with high probability Gdn becomes a bounded degree dag after removing a small amount of vertices.

where the last inequality is obtained by writing

Similarly for a fixed v∈Zn we have

Now by linearity of expectation we have

and the right-hand side is bounded from above by 2ndΔΔ!. Thus, by Markov’s inequality we have

which finishes the proof of (3).

which is bounded from above by

and Markov’s inequality again gives us the desired bound. ∎

3.3 Construction of an nδ-extender sequence from Gdn

The key lemma which we need is the following.

Note that Xv,r+1=Xv,r⊔Yv,r As such, by the first item of Proposition 12, for all v,r we have

Clearly it is enough to show that

Since each (ε,k)-depth function compatible with a given graph G is of the form δ′D for some D⊂E(G) with |D|≤ε|V(G)|, we have that (7) is bounded above by

Recall that the law of E is the push-forward of ιdn through the map Set. As such, we deduce that (8) is bounded above by

Let us first estimate the number of summands in (

To estimate each summand, let us fix I⊂dn, and let us fix (ei)i∈I∈(Zn×Zn)I. Let D:={ei:i∈I} and let l be the depth function δ′D on the graph (Zn,D). The probability that l will still be a depth function after we add nd−|I| remaining edges is, by Lemma 21, at most

As such, we have that (9) is bounded above by

We are now ready to prove Theorem 5. Clearly it follows from the following theorem.

Let ε∈(0,18). Then there exists a bounded degree sequence of dags (Gn) which is an (nε3)-extender sequence.

Therefore, by Proposition 22, we have for n>n0 that