We consider the problem of parameter estimation in the case of observation of the trajectory of diffusion process. We suppose that the drift coefficient has a singularity of cusp-type and the unknown parameter corresponds to the position of the point of the cusp. The asymptotic properties of the maximum likelihood estimator and Bayesian estimators are described in the asymptotics of small noise, i.e., as the diffusion coefficient tends to zero. The consistency, limit distributions and the convergence of moments of these estimators are established. 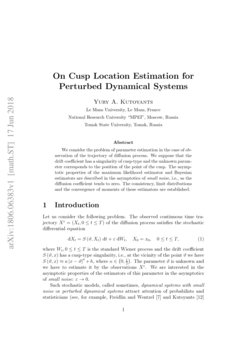 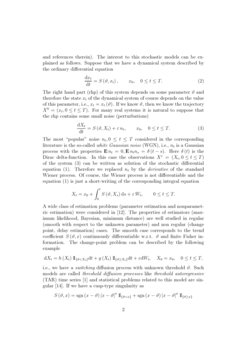 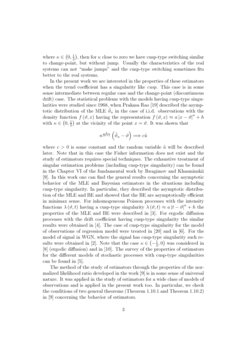 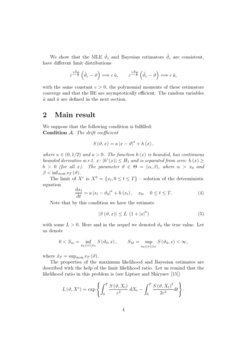 In this paper, we consider a stochastic model based on the Cox- Ingersol...
Nafidi Ahmed, et al. ∙

On the parameter estimation of ARMA(p,q) model by approximate Bayesian computation

In this paper, the parameter estimation of ARMA(p,q) model is given by a...
Linghui Li, et al. ∙

Convergence of Bayesian Estimators for Diffusions in Genetics

The main goal of this paper is to study the parameter estimation problem...
Ziteng Cheng, et al. ∙

where Wt,0≤t≤T is the standard Wiener process and the drift coefficient S(ϑ,x) has a cusp-type singularity, i.e., at the vicinity of the point ϑ we have S(ϑ,x)≈a|x−ϑ|κ+h, where κ∈(0,12). The parameter ϑ is unknown and we have to estimate it by the observations Xε. We are interested in the asymptotic properties of the estimators of this parameter in the asymptotics of small noise: ε→0.

and references therein). The interest to this stochastic models can be explained as follows. Suppose that we have a dynamical system described by the ordinary differential equation

The right hand part (rhp) of this system depends on some parameter ϑ and therefore the state xt of the dynamical system of course depends on the value of this parameter, i.e., xt=xt(ϑ). If we know ϑ, then we know the trajectory X0=(xt,0≤t≤T). For many real systems it is natural to suppose that the rhp contains some small noise (perturbations)

The most “popular” noise nt,0≤t≤T considered in the corresponding literature is the so-called white Gaussian noise (WGN), i.e., nt is a Gaussian process with the properties Ent=0,Entns=δ(t−s). Here δ(t) is the Dirac delta-function. In this case the observations Xε=(Xt,0≤t≤T) of the system (3) can be written as solution of the stochastic differential equation (1). Therefore we replaced nt by the derivative of the standard Wiener process. Of course, the Wiener process is not differentiable and the equation (1) is just a short-writing of the corresponding integral equation

A wide class of estimation problems (parameter estimation and nonparametric estimation) were considered in [12]. The properties of estimators (maximum likelihood, Bayesian, minimum distance) are well studied in regular (smooth with respect to the unknown parameter) and non regular (change point, delay estimation) cases. The smooth case corresponds to the trend coefficient S(ϑ,x) continuously differentiable w.r.t. ϑ and finite Fisher information. The change-point problem can be described by the following example

In the present work we are interested in the properties of these estimators when the trend coefficient has a singularity like cusp. This case is in some sense intermediate between regular case and the change-point (discontinuous drift) case. The statistical problems with the models having cusp-type singularities were studied since 1968, when Prakasa Rao [19] described the asymptotic distribution of the MLE ^ϑn in the case of i.i.d. observations with the density function f(ϑ,x) having the representation f(ϑ,x)≈a|x−ϑ|κ+h with κ∈(0,12) at the vicinity of the point x=ϑ. It was shown that

is some constant and the random variable

We show that the MLE ^ϑε and Bayesian estimators ~ϑε are consistent, have different limit distributions

with the same constant c>0, the polynomial moments of these estimators converge and that the BE are asymptotically efficient. The random variables ^u and ~u are defined in the next section.

We suppose that the following condition is fulfilled: Condition A. The drift coefficient

The limit of Xε is X0={xt,0≤t≤T} – solution of the deterministic equation

Note that by this condition we have the estimate

with some L>0. Here and in the sequel we denoted ϑ0 the true value. Let us denote

The properties of the maximum likelihood and Bayesian estimates are described with the help of the limit likelihood ratio. Let us remind that the likelihood ratio in this problem is (see Liptser and Shiryaev [15])

If this equation has more than one solution, then we can take anyone as MLE. Note that we cannot use the maximum likelihood equation

where dot means derivative w.r.t. ϑ because the likelihood ratio function L(ϑ,Xε) is not differentiable.

The Bayesian estimator (BE) ~ϑε

for the quadratic loss function and density a priori

p(θ),θ∈Θ (continuous positive function) is defined by the expression

We take quadratic loss function for the simplicity of exposition. The established in this work properties of the likelihood ratio allow to describe the behavior of the BE for essentially wider class of loss functions (see Theorem 1.10.2 in [9]).

The limit behavior of the MLE and BE are described with the help of two random variables ^u and ~u defined as follows. Let us introduce the random function

Here WH(⋅) is two-sided fractional Brownian motion with Hurst parameter H=κ+1/2. The random variable ^u is well defined [18]. We need as well the definitions

As usual in such problems, we can introduce the lower minimax bound on the risks of all estimators:

The main result of this work is the following theorem.

Let the condition A be fulfilled, then the MLE ^ϑε and the BE ~ϑε are uniformly on compacts K⊂Θ consistent, have different limit distributions

the moments converge (uniformly on compacts): for any p>0

and the Bayesian estimators are asymptotically efficient.

It has the representation

We show below that Zε(u) converges in distribution to the random function Zϑ0(u)=Z(γϑ0u).

The first result which we are going to prove is the uniform convergence of the random process Xε to the deterministic solution X0=(xt,0≤t≤T) of the ordinary equation (4). To prove it we need the following estimate.

(N.V. Krylov [11]) Let the conditions A be fulfilled, then there exists a constant L∗>0

such that with probability 1

Proof. Let us denote by F(xt) the right hand part of the equation (4). Then we can write

If we put Yt=Xt−εWt, then the equation

can be written as

The equality (10) allows to write

As the function F(y) is continuous we have

Recall that F(~y) is bounded and separated from zero by a positive constant which does not depend on ε. Further, there exists a constant c1>0 such that

Let the condition A be fulfilled, then for any κ1∈(0,κ) there exist the constants ν>0 and c∗>0 such that

Proof. Remind that for any N>0

Hence we can write

Note that Iε(u,x),u∈Uε is a Gaussian process. By condition A the solution xt,0≤t≤T is strictly increasing function. Therefore we can put t=t(x) by the relation

This provides us the equality (x1<x2)

Hence if we put

then w(x),x0≤x≤xT is a Gaussian process with independent increments

Further, let us change the variables x=ϑ0+sε1/H. Then

with the corresponding two-sided Wiener process

It has the following properties: EI0(u)=0 and

is known as a representation of the two-sided fractional Brownian motion, because WH(⋅) is a Gaussian process with the properties:

and this convergence is uniform on the compacts ϑ0∈K⊂Θ.

Let us consider the ordinary integral

If we show the convergence in probability

then we obtain the convergence

Moreover, according to (9), we know that

For Jε(u,X0) we have the similar relations