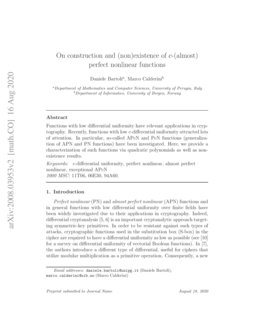 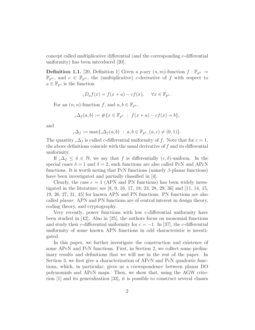 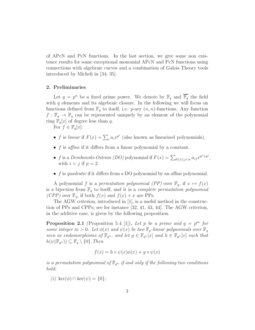 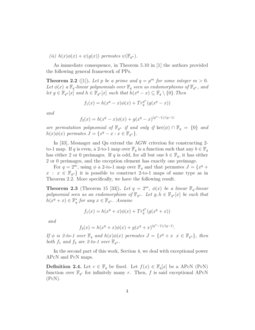 On non-monimial APcN permutations over finite fields of even characteristic

Functions with low c-differential uniformity were proposed in 2020 and a...
Yanan Wu, et al. ∙

In this paper, we construct some piecewise defined functions, and study ...
Daniele Bartoli, et al. ∙

Bent functions from a vector space V_n over 𝔽_2 of even dimension n=2m i...
Wilfried Meidl, et al. ∙

If cΔf≤δ∈N, we say that f is differentially (c,δ)-uniform. In the special cases δ=1 and δ=2, such functions are also called PcN and APcN functions. It is worth noting that PcN functions (namely β

-planar functions) have been investigated and partially classified in

-differential uniformity of some known APN functions in odd characteristic is investigated.

In this paper, we further investigate the construction and existence of some APcN and PcN functions. First, in Section 2, we collect some preliminary results and definitions that we will use in the rest of the paper. In Section 3, we first give a characterization of APcN and PcN quadratic functions, which, in particular, gives us a correspondence between planar DO polynomials and APcN maps. Then, we show that, using the AGW criterion AGW and its generalization Mesn , it is possible to construct several classes of APcN and PcN functions. In the last section, we give some non existence results for some exceptional monomial APcN and PcN functions using connections with algebraic curves and a combination of Galois Theory tools introduced by Micheli in micheli2019constructions ; micheli2019selection .

Let q=pn be a fixed prime power. We denote by Fq and ¯¯¯¯¯Fq the field with q elements and its algebraic closure. In the following we will focus on functions defined from Fq to itself, i.e. p-ary (n,n)-functions. Any function f:Fq→Fq can be represented uniquely by an element of the polynomial ring Fq[x] of degree less than q.

Let p be a prime and q=pm for some integer m>0. Let ϕ(x) and ψ(x) be two Fq-linear polynomials over Fq seen as endomorphisms of Fqn, and let g∈Fqn[x] and h∈Fqn[x] such that h(ψ(Fqn))⊆Fq∖{0}.Then

is a permutation polynomial of Fqn if and only if the following two conditions hold:

As immediate consequence, in Theorem 5.10 in AGW the authors provided the following general framework of PPs.

Let p be a prime and q=pm for some integer m>0. Let ϕ(x) a Fq-linear polynomials over Fq seen as endomorphisms of Fqn, and let g∈Fqn[x] and h∈Fqn[x] such that h(xq−x)⊆Fq∖{0}.Then

For q=2m, using ϕ a 2-to-1 map over Fq and that permutes J={xq+x:x∈Fqn} it is possible to construct 2-to-1 maps of same type as in Theorem 2.2. More specifically, we have the following result.

In the second part of this work, Section 4, we deal with exceptional power APcN and PcN maps.

Let c∈Fq be fixed. Let f(x)∈Fq[x] be a APcN (PcN) function over Fqr for infinitely many r. Then, f is said exceptional APcN (PcN).

Results on exceptional APN e PN functions can be found in Survey ; State and the references therein.

We use Galois theory tools to provide non-existence results for APcN and PcN monomials. We recall here the Galois theoretical part of our approach which deals with totally split places. This method was successfully used also in BM2020 ; ferraguti2018full ; micheli2019constructions ; micheli2019selection .

We will make use of the following results.

(Helmut, , Theorem 3.9) Let r be a prime and G be a primitive group of degree n=s+k with k≥3. If G contains an element of degree and order s (i.e. an s-cycle), then G is either alternating or symmetric.

The proof of the following result can be found in guralnick2007exceptional .

The following can also be deduced by kosters2014short ; its proof can be found in BM2020 .

Let p be a prime number, m a positive integer, and q=pm. Let L:F be a separable extension of global function fields over Fq of degree n, M be the Galois closure of L:F, and suppose that the field of constants of M is Fq. There exists an explicit constant C∈R+ depending only on the genus of M and the degree of L:F such that if q>C then L:F has a totally split place.

3 A characterization of APcN and PcN functions

It is well-known that a DO polynomial is planar if and only if it is 2-to-1 (see (CM2011, , Theorem 3)), the following result gives a characterization of APcN and PcN quadratic polynomials for c∈Fp∖{1}.

Let p be a prime. Let f be a quadratic polynomial over Fpm for some integer m. Then, for any c∈Fp∖{1} we have the following.

(i) Let f be a quadratic polynomial, that is f(x)=∑i,jai,jxpi+pj+∑ibixpi. We can note that for any γ we have

Let q=ph. If the quadratic function f is of type

then the results above can be extended to any c∈Fq∖{1}.

The result (i) of Theorem 3.1 cannot be extend to a general planar quadratic function. Indeed, the planarity of a function f is invariant by adding a linear (affine) polynomial to f, while the c-differential uniformity is not. So, if we consider a planar DO polynomial, adding a linear function we could obtain a functions which is no more 2-to-1 and thus which is no APcN.

In SGGRT2020 , the authors introduce and study c-differential bent functions. In their work, they also relax the definition of perfect c-nonlinearity excluding the case of the derivative in the zero direction. In particular, they define PcN function any f such that f(x+γ)−cf(x) is a permutation for any γ∈F∗q, and strictly PcN if in addition f is a permutation.

For p=2, even if we exclude the derivative in the zero direction, a PcN function has to be a PP. Indeed, let f be PcN and suppose that there exist x1 and x2=x1+γ such that f(x1)=f(x1+γ). Since f is PcN,

It would be interesting to understand if this is the case also for p>2.

3.1 Some PcN and APcN polynomials from the AGW criterion

In the following we will show that from the AGW criterion and its generalization Mesn (for the case p=2) we can obtain PcN and APcN functions.

Theorem 2.2 gives us the possibility of constructing PPs of the form

where g can be any polynomial over Fqn. This is implied by the fact that xq−x annihilates both Trqnq(g(x)) and g(x)(qn−1)/(q−1) for any x. We can immediately construct some PcN polynomials.

Let c∈Fq∖{0,1}. Consider for instance the permutation f1. Then f1 is PcN if and only if

is a PP for any γ. Denoting by ψ(x)=xq−x, from the AGW criterion (Proposition 2.1) we have that this is a PP if and only if

Another type of PPs, which are also PcN, can be constructed in the following way.

is a PP if and only if ϕ(x) induces a permutation over J.

From the AGW criterion (Proposition 2.1) we have that f is a PP if and only if

Then, since g(J)⊆J we have that

An easy example of function g such that g(J)⊆J is given by g(x)=x+δ with δ∈J.

Theorem 3.6 can be generalized (with a similar proof) to functions f of type

is a PP if and only if ϕ(x) induces a permutation over J.

g′(J)⊆J. Now as in Theorem 3.6, this is a permutation if and only if ϕ(x) permutes J. This condition is satisfied since f is a PP. ∎

In even characteristic, PN functions (i.e. PcN function with c=1) do not exist. As pointed out in EFRST2020 , PcN functions, for c≠1, exist also for the case p=2. Indeed, trivially, any PP is PcN for c=0 and any linear permutation is PcN for any c≠1. Theorems 3.5 and 3.10 provide non-trivial PcN functions for p=2.

A similar argument can be done for the case of APcN maps using the results of Mesn . As for the PcN case we can obtain APcN maps for any c∈Fq∖{1} using functions as in Theorem 2.3. In particular, for n odd, we can obtain the following APcN maps.

Let us consider f1(x). For any γ we have

For f2 the claim follows in a similar way. ∎

For constructing APcN functions as in Theorem 3.12, we can consider, for example, the 2-to-1 function ϕ over Fq defined by ϕ(x)=x2i+x with gcd(i,m)=1.

Note that, when n is even, it is not possible to construct ϕ that is a 2-to-1 map over Fq and permutes J since Fq⊆J. Indeed Fq2 is a subfield of Fqn and, denoting by ψ(x)=xq+x, we have ψ(Fq2)=Fq.

So, for n even, it is not possible to construct APcN functions as in Theorem 3.12.

In this section we provide non-existence results for exceptional APcN (and PcN) monomials. In what follows, we will consider exponents d such that p∤d(d−1), and we denote ph by q, for some integer h, and by s the smallest positive integer such that d−1∣(ps−1).

Let us consider f(x)=xd defined over Fq. The monomial f(x) is APcN, c≠1, if and only if

When a≠0, Condition (2) can be simplified to

A standard tool, when dealing with APN or PN functions is to consider the curve Cf,c of affine equation

We refer to BT2019 for and the references therein for an introduction to basic concepts about curves over finite fields.

It is readily seen that Condition (3) implies the existence of at most one absolutely irreducible component of Cf,c defined over Fq, provided that q is large enough with respect to d.

Suppose that d−1√c∉Fps. Then Df,c contains no singular points off X=Y.

By our hypothesis ξ∈Fps. Equation (6) yields

Note that, under the hypothesis of Theorem 4.1 the number of singular points of Cf,c is at most d/2. A deeper analysis shows that

and therefore points (a,a) are double points of Df,c and then simple points of Cf,c. So, Cf,c possesses no singular points and hence it is absolutely irreducible.

We want to prove that if q is large enough there exists t0∈Fq such that the equation (x+1)d−cxd=t0 has more than two solutions, i.e. xd is not exceptional PcN nor APcN. To this end we will investigate the geometric and the algebraic Galois groups of the polynomial Fc,d(t,x)=(x+1)d−cxd−t.

More in details, consider Garithc,d=Gal(Fc,d(t,x):Fq(t)) and Ggeomc,d=Gal(Fc,d(t,x):¯¯¯Fq(t)). They are both subgroups of Sd, the symmetric group over d elements. Our aim is to prove that Ggeomc,d=Sd. This would force that Ggeomc,d=Sd=Garithc,d, since Ggeomc,d≤Garithc,d and therefore by Chebotarev density Theorem kosters2014short , one obtains the existence of a specialization t0∈Fq for which Fc,d(t0,x) splits into d pairwise distinct linear factors (x−xi) defined over Fq and therefore (x+1)d−cxd cannot be a permutation or 2-to-1 and xd is not PcN nor APcN.

First we prove that the geometric Galois group of Fc,d(t,x)=(x+1)d−cxd−t∈Fq[x] is primitive (i.e. it does not act on a non–trivial partition of the underlying set). Let M be the splitting field of Fc,d(t,x) and G be the Galois group of Fc,d(t,x) over Fq(t). Let x be a root of Fc,d(t,x) and consider the extension Fq(x):Fq(t). Clearly, t=(x+1)d−cxd=fc,d(x) by definition. As a consequence of Lüroth’s Theorem, f is indecomposable (i.e. it cannot be written as a composition of two non-linear polynomials) if and only if G is a primitive group; see (Fried, , Proposition 3.4).

Suppose that there exists another repeated root y0≠x0 of (x+1)d−cxd=t0. Then

Let r be such that the element t0 obtained above belongs to Fqr. This means that (x+1)d−cxd−t0 has exactly one factor of multiplicity 2 and all the others of multiplicity 1. Let now M be the splitting field of Fc,d(t,x) over Fqr(t). Let R be a place of M lying above t0. Now, using Lemma 2.6 we obtain that the decomposition group D(R∣t0) has a cycle of order exactly 2 and fixes all the other elements of H=HomFq(t)(Fq(t)[x]:Fc,d(x),M) (H can be simply thought as the set of roots of Fc,d(t,x) in ¯¯¯¯¯¯¯¯¯¯¯¯Fq(t)). Now pick any element g∈D(R∣t0) that acts non-trivially on H. This element has to be a transposition, which in turn forces Gal(Fc,d(t,x):Fqru(t)) to contain a transposition for any u∈N and therefore in particular that Gal(Fc,d(t,x):¯¯¯Fq(t)) contains a transposition.