On Consistency of Graph-based Semi-supervised Learning

Graph-based semi-supervised learning is one of the most popular methods in machine learning. Some of its theoretical properties such as bounds for the generalization error and the convergence of the graph Laplacian regularizer have been studied in computer science and statistics literatures. However, a fundamental statistical property, the consistency of the estimator from this method has not been proved. In this article, we study the consistency problem under a non-parametric framework. We prove the consistency of graph-based learning in the case that the estimated scores are enforced to be equal to the observed responses for the labeled data. The sample sizes of both labeled and unlabeled data are allowed to grow in this result. When the estimated scores are not required to be equal to the observed responses, a tuning parameter is used to balance the loss function and the graph Laplacian regularizer. We give a counterexample demonstrating that the estimator for this case can be inconsistent. The theoretical findings are supported by numerical studies. 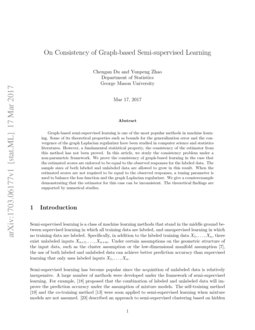 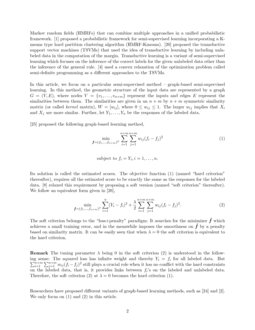 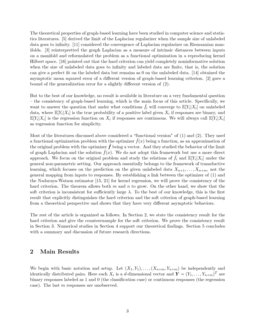 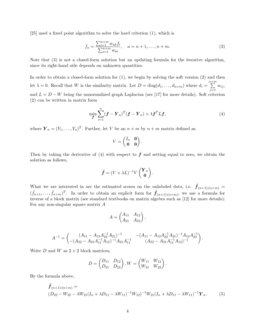 In this paper, we consider the interpretability of the foundational Lapl...
Raif M. Rustamov, et al. ∙

X1,…,Xn, there exist unlabeled inputs Xn+1,…,Xn+m. Under certain assumptions on the geometric structure of the input data, such as the cluster assumption or the low-dimensional manifold assumption [7], the use of both labeled and unlabeled data can achieve better prediction accuracy than supervised learning that only uses labeled inputs X1,…,Xn.

[4] used a convex relaxation of the optimization problem called semi-definite programming as a different approaches to the TSVMs.

In this article, we focus on a particular semi-supervised method – graph-based semi-supervised learning. In this method, the geometric structure of the input data are represented by a graph G=(V,E), where nodes V={v1,…,vn+m} represent the inputs and edges E represent the similarities between them. The similarities are given in an n+m by n+m symmetric similarity matrix (or called kernel matrix), W=[wij], where 0≤wij≤1. The larger wij implies that Xi and Xj are more similar. Further, let Y1,…,Yn be the responses of the labeled data.

The soft criterion belongs to the “loss+penalty” paradigm: It searches for the minimizer ^f which achieves a small training error, and in the meanwhile imposes the smoothness on ^f by a penalty based on similarity matrix. It can be easily seen that when λ=0 the soft criterion is equivalent to the hard criterion.

Researchers have proposed different variants of graph-based learning methods, such as [24] and [2]. We only focus on (1) and (2) in this article.

The theoretical properties of graph-based learning have been studied in computer science and statistics literatures. [5] derived the limit of the Laplacian regularizer when the sample size of unlabeled data goes to infinity. [11] considered the convergence of Laplacian regularizer on Riemannian manifolds. [3] reinterpretted the graph Laplacian as a measure of intrinsic distances between inputs on a manifold and reformulated the problem as a functional optimization in a reproducing kernel Hilbert space. [16] pointed out that the hard criterion can yield completely noninformative solution when the size of unlabeled data goes to infinity and labeled data are finite, that is, the solution can give a perfect fit on the labeled data but remains as 0 on the unlabeled data. [14] obtained the asymptotic mean squared error of a different version of graph-based learning criterion. [2] gave a bound of the generalization error for a slightly different version of (2).

But to the best of our knowledge, no result is available in literature on a very fundamental question – the consistency of graph-based learning, which is the main focus of this article. Specifically, we want to answer the question that under what conditions ^fi will converge to E[Yi|Xi] on unlabeled data, where E[Yi|Xi]

is the true probability of a positive label given

Most of the literatures discussed above considered a “functional version” of (1) and (2). They used a functional optimization problem with the optimizer ^f(x) being a function, as an approximation of the original problem with the optimizer ^f being a vector. And they studied the behavior of the limit of graph Laplacian and the solution ^f(x). We do not adopt this framework but use a more direct approach. We focus on the original problem and study the relations of ^fi and E[Yi|Xi] under the general non-parametric setting. Our approach essentially belongs to the framework of transductive learning, which focuses on the prediction on the given unlabeled data Xn+1,…,Xn+m, not the general mapping from inputs to responses. By establishing a link between the optimizer of (1) and the Nadaraya-Watson estimator [15, 21] for kernel regression, we will prove the consistency of the hard criterion. The theorem allows both m and n to grow. On the other hand, we show that the soft criterion is inconsistent for sufficiently large λ. To the best of our knowledge, this is the first result that explicitly distinguishes the hard criterion and the soft criterion of graph-based learning from a theoretical perspective and shows that they have very different asymptotic behaviors.

We begin with basic notation and setup. Let (X1,Y1),…,(Xn+m,Yn+m) be independently and identically distributed pairs. Here each Xi is a d-dimensional vector and Y=(Y1,…,Yn+m)T are binary responses labeled as 1 and 0 (the classification case) or continuous responses (the regression case). The last m responses are unobserved.

[25] used a fixed point algorithm to solve the hard criterion (1), which is

Note that (3) is not a closed-form solution but an updating formula for the iterative algorithm, since its right-hand side depends on unknown quantities.

In order to obtain a closed-form solution for (1), we begin by solving the soft version (2) and then let λ=0. Recall that W is the similarity matrix. Let D=diag(d1,…,dn+m) where di=n+m∑j=1wij, and L=D−W being the unnormalized graph Laplacian (see [17] for more details). Soft criterion (2) can be written in matrix form

Then by taking the derivative of (4) with respect to f and setting equal to zero, we obtain the solution as follows,

What we are interested in are the estimated scores on the unlabeled data, i.e. ^f(n+1):(n+m)=(^fn+1,…,^fn+m)T. In order to obtain an explicit form for ^f(n+1):(n+m), we use a formula for inverse of a block matrix (see standard textbooks on matrix algebra such as [12] for more details): For any non-singular square matrix A

By the formula above,

Letting λ=0, we obtain the solution for the hard criterion (1),

[2] obtained a similar formula for a slightly different objective function.

Clearly, the form of (6) is closely related to the Nadaraya-Watson estimator [15],[21] for kernel regression, which is

The Nadaraya-Watson estimator is well studied under the non-parametric framework. We can construct W by a kernel function, that is, let wij=K((Xi−Xj)/hn), where K is a nonnegative function on Rd, and hn is a positive constant controlling the bandwidth of the kernel. Let q(X)=E[Y|X] be the true regression function. The consistency of Nadaraya-Watson estimator was first proved by [21] and [15]. And many other researchers such as [9] and [6] studied its asymptotic properties under different assumptions. Here we follow the result in [10]. If hn→0, nhdn→∞ as n→∞, and K satisfies:

By establishing a connection between the solution of the hard criterion and Nadaraya-Watson estimator, we prove the following main theorem:

Suppose that (X1,Y1),(X2,Y2),…,(Xn+m,Yn+m) are independently and identically distributed with Yi being bounded; hn and K satisfy the above conditions. Further, let Z be the difference of two independent X’s, i.e. Z=X1−X2

The proof will be given in Section 3.

We now consider the soft criterion with λ≠0.

Suppose that (X1,Y1),(X2,Y2),…,(Xn+m,Yn+m) are independently and identically distributed with |E(Y1)|<∞. Further, suppose that W represents a connected graph. Then for sufficiently large λ, the soft criterion (2) is inconsistent.

Consider another extreme case of the soft criterion (2), λ=∞. When W represents a connected graph, the objective function becomes

By the law of large numbers,

since the right-hand side is a random variable. This implies that for sufficiently large

3 Proof of the Main Theorem

We give the proof of Theorem 1 in this section.

For any positive integer l, define

Our goal is to prove that the limit of Sl exists with probability approaching 1, and thus we can have

where Vd(δhn) denotes the volume of a d-dimensional ball with radius hn, and s is a constant independent with n. Since nhdn→∞, the above inequality implies npn→∞. On the other side, pn→0 since hn→0.

by condition (i) and (iii). For simplicity of notation, let

where Φn is a nonnegative function depending on n. Thus k∗βΦn(a)npn is an upper bound of every element in the matrix D−122W22. By (10), we have

where M=2ksβ>k∗(1−ϵ)sβ. Note that M is a constant independent with n and m.

For the sake of simplicity, we say a matrix A has tiny elements, if

with probability approaching 1, where ∥A∥max=maxijAij. And (A)i denotes the i-th row of A. Then D−122W22 has tiny elements by (11). Moreover,

holds with probability approaching 1. By induction,

We now go back to the solution of the hard criterion of graph-based semi-supervised learning,

By assumption, Yi’s are bounded. Without loss of generality, assume ∥Yn∥max≤1. For 1≤a≤m, define

with probability approaching 1 as n→∞. This implies

since for any ϵ>0 we can find m,n∈N such that mMnhdn≤ϵ and

Since S has tiny elements,

which implies (S)aD−122W21Yn→0 in probability. The theorem then holds by the consistency of Nadaraya-Watson estimator.

In this section, we compare the performance of the hard criterion and the soft criterion with different tuning parameters under a linear and non-linear model.

, and the variance-covariance matrix

be the Gaussian radial basis function (RBF) kernel, that is,

where σ=hn=(logn/n)1/5. Note that W has compact support since Xi’s are truncated, and the choice of hn satisfies the condition in Theorem 1.

We consider two models in simulation studies. In Model 1, the responses Yi

We compare the performance of graph-based learning methods with four different tuning parameters, λ=0,0.01,0.1 and 5. The performance is measured by the root mean squared error (RMSE) on the unlabeled data, that is,

Each simulation is repeated 1000 times and the average RMSEs are reported.

Figure 1 shows the RMSEs under Model 1 when the sample size of unlabeled data m is fixed as 30 and the sample size of labeled data n=10, 30, 50, 100, 200, 300, 500, 800, 1000 and 1500. As n increases, the RMSEs of all methods decrease as expected. More importantly, the RMSE increases as λ increases. In particular, the hard criterion always outperforms the soft criterion, which is consistent with our theoretical results.

Figure 2 shows the RMSEs under Model 1 when n is fixed as 100 and m=30, 60, 100, 300, 500 and 1000. As before, the RMSE always increases as λ increases. Moreover, the RMSEs of all methods increase as m increases, which suggests that the hard criterion may not be consistent when m grows faster than n. For the non-linear logit function, Figure 3 and 4 show the same patterns as in Figure 1 and 2, respectively, which also support our theoretical results.

In this article, we proved the consistency of graph-based semi-supervised learning when the tuning parameter of the graph Laplacian is zero (the hard criterion) and showed that the method can be inconsistent when the tuning parameter is nonzero (the soft criterion). Moreover, the numerical studies also suggest that the hard criterion outperforms the soft criterion in terms of the RMSE. These results provide a better understanding about the statistical properties of graph-based semi-supervised learning. Of course, the accuracy of prediction can be measured by other indicators such as the area under the receiver operating characteristic curve (AUC). The hard criterion may not always be the best choice in term of these indicators. Further theoretical properties such as rank consistency will be explored in future research. Moreover, we would also like to investigate the behavior of these methods when the unlabeled data grow faster than the label data.