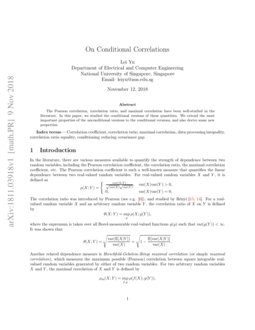 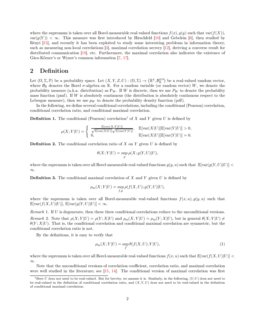 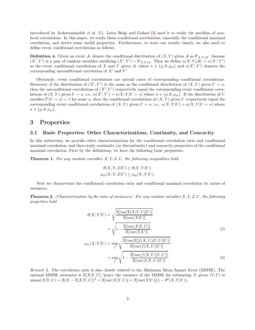 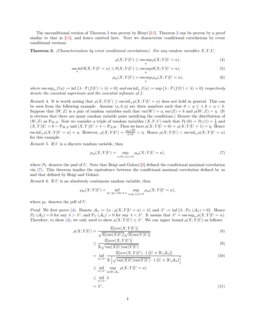 X and Y, it is defined as

where the supremum is taken over all Borel-measurable real-valued functions g(y) such that var(g(Y))<∞. It was shown that

where the supremum is taken over all Borel-measurable real-valued functions f(x),g(y) such that var(f(X)), var(g(Y))<∞. This measure was first introduced by Hirschfeld [10] and Gebelein [8], then studied by Rényi [15], and recently it has been exploited to study some interesting problems in information theory, such as measuring non-local correlations [3], maximal correlation secrecy [12], deriving a converse result for distributed communication [18], etc. Furthermore, the maximal correlation also indicates the existence of Gács-Körner’s or Wyner’s common information [7, 17].

be a probability space. Let

be a real-valued random vector, where

If U is degenerate, then these three conditional correlations reduce to the unconditional versions.

By the definitions, it is easy to verify that

Given an event A, denote the conditional distribution of (X,Y) given A as PX,Y|A. Assume (X′,Y′) is a pair of random variables satisfying (X′,Y′)∼PX,Y|A. Then we define κ(X;Y|A):=κ(X′;Y′) as the event conditional correlations of X and Y given A, where κ∈{ρ,θ,ρm} and κ(X′;Y′) denotes the corresponding unconditional correlation of X′ and Y′.

For any random variables X,Y,Z,U, the following inequalities hold.

(Characterization by the ratio of variances). For any random variables X,Y,Z,U, the following properties hold.

The correlation ratio is also closely related to the Minimum Mean Square Error (MMSE). The optimal MMSE estimator is

(Characterization by event conditional correlations). For any random variables X,Y,U,

where esssupuf(u):=inf{λ:P(f(U)>λ)=0} and essinfuf(u):=sup{λ:P(f(U)<λ)=0} respectively denote the essential supremum and the essential infimum of f.

is a discrete random variable, then

is an absolutely continuous random variable, then

where pU denotes the pdf of U.

Combining the two points above, we have ρm(X;Y|U)=λ∗. ∎

as the second largest singular value of the matrix

For absolutely-continuous X,Y, denote λ2(u) as the second largest singular value of the bivariate function p(x,y|u)√p(x|u)p(y|u), where p(x,y|u) denotes a conditional pdf of (X,Y) respect to U. Then we have the following singular value characterization of conditional maximal correlation.

This property is consistent with the one of the unconditional version by setting U to a constant, i.e., ρm(X;Y)=λ2.

Note that, ρm(X;Y|U) is a mapping that maps a distribution PX,Y,U to a real number in [0,1]. Now we study the concavity of such a mapping.

This theorem directly follows from the characterization in (6). ∎

For a discrete random variable, the distribution is uniquely determined by its pmf. Therefore, for discrete random variables (X,Y,U), ρm(X;Y|U) can be also seen as a mapping that maps a pmf PX,Y,U to a real number in [0,1]. Assume X,Y,U⊂R are three finite sets. Denote P(X×Y×U) as the set of pmfs defined on X×Y×U (i.e., the |X||Y||U|−1 dimensional probability simplex). Consider ρm(X;Y|U) as a mapping ρm(X;Y|U):P(X×Y×U)→[0,1]. Now we study the continuity (or discontinuity) of such a mapping.

1) For any random variables X,Y,U,

2) Moreover, ρm(X;Y|U)=0 if and only if X and Y are conditionally independent given U. Furthermore, for discrete random variables X,Y,U with finite supports, ρm(X;Y|U)=1 if and only if f(X,U)=g(Y,U) for some functions f and g such that H(f(X,U)|U)>0 (i.e., X and Y have conditional Gács-Körner common information given U [7]), where H(Z|W):=−ElogPZ|W(Z|W) denotes the conditional entropy of Z given X.

Next we show that the three conditional correlations are equal for the Gaussian case.

(Gaussian case). For jointly Gaussian random variables X,Y,U, we have

for a sequence of pairs of independent random variables (Xn,Yn) is proven in [17, Thm. 1]. Hence the result for the event conditional maximal correlation also holds. Using this result and Theorem 4, we have

where (18) follows by the following lemma.

Assume I is a countable set, and PU is an arbitrary distribution on (R,BR). Then for any function f:I×R→R, we have

This lemma follows from the following two points. For a number ϵ>0, assume i∗∈I satisfies that esssupuf(i∗,u)≥supi∈Iesssupuf(i,u)−ϵ. Then for any function f,

Since ϵ>0 is arbitrary, we have esssupusupi∈If(i,u)≥supi∈Iesssupuf(i,u).

have the same joint distribution.