On closeness to k-wise uniformity 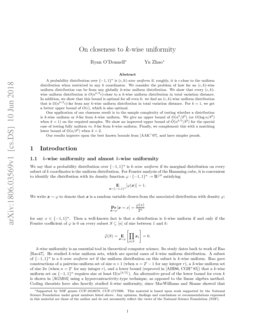 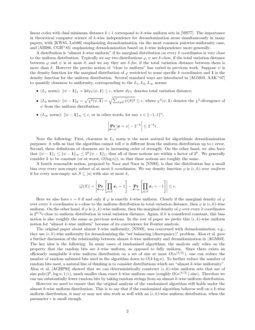 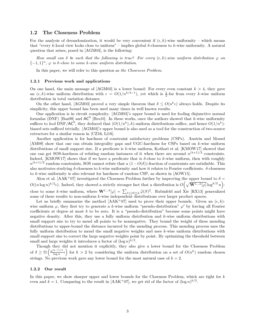 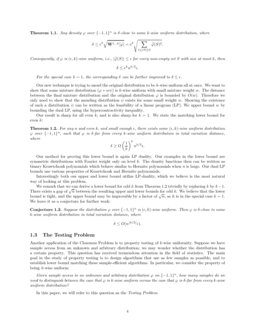 We say that a probability distribution over {−1,1}n is k-wise uniform if its marginal distribution on every subset of k coordinates is the uniform distribution. For Fourier analysis of the Hamming cube, it is convenient to identify the distribution with its density function φ:{−1,1}n→\R≥0 satisfying

We write \bx∼φ to denote that \bx

is a random variable drawn from the associated distribution with density

for any x∈{−1,1}n. Then a well-known fact is that a distribution is k-wise uniform if and only if the Fourier coefficient of φ is 0 on every subset S⊆[n] of size between 1 and k:

A distribution is “almost k-wise uniform” if its marginal distribution on every k coordinates is very close to the uniform distribution. Typically we say two distributions φ,ψ are δ-close, if the total variation distance between φ and ψ is at most δ; and we say they are δ-far, if the total variation distance between them is more than δ. However the precise notion of “close to uniform” has varied in previous work. Suppose ψ is the density function for the marginal distribution of φ restricted to some specific k coordinates and \bone is the density function for the uniform distribution. Several standard ways are introduced in [AGM03, AAK+07] to quantify closeness to uniformity, corresponding to the L1,L2,L∞ norms:

Note the following: First, closeness in L1 norm is the most natural for algorithmic derandomization purposes: it tells us that the algorithm cannot tell ψ is different from the uniform distribution up to \eps error. Second, these definitions of closeness are in increasing order of strength. On the other hand, we also have that ∥ψ−\bone∥1≤∥ψ−\bone∥∞≤2k∥ψ−\bone∥1; thus all of these notions are within a factor of 2k. We generally consider k to be constant (or at worst, O(logn)), so that these notions are roughly the same.

A fourth reasonable notion, proposed by Naor and Naor in [NN93], is that the distribution has a small bias over every non-empty subset of at most k coordinates. We say density function φ is (\eps,k)-wise uniform if for every non-empty set S⊆[n] with size at most k,

For the analysis of derandomization, it would be very convenient if (ϵ,k)-wise uniformity – which means that “every k-local view looks close to uniform” – implies global δ-closeness to k-wise uniformity. A natural question that arises, posed in [AGM03], is the following:

In this paper, we will refer to this question as the Closeness Problem.

On the other hand, [AGM03] proved a very simple theorem that δ≤O(nk\eps) always holds. Despite its simplicity, this upper bound has been used many times in well known results.

One application is in circuit complexity. [AGM03]’s upper bound is used for fooling disjunctive normal formulas (DNF) [Baz09] and \AC0 [Bra10]. In these works, once the authors showed that k-wise uniformity suffices to fool DNF/\AC0, they deduced that (O(1/nk),k)-uniform distributions suffice, and hence O(1/nk)-biased sets sufficed trivially. [AGM03]’s upper bound is also used as a tool for the construction of two-source extractors for a similar reason in [CZ16, Li16].

Another application is for hardness of constraint satisfactory problems (\CSPs). Austrin and Mossel [AM09] show that one can obtain integrality gaps and UGC-hardness for CSPs based on k-wise uniform distributions of small support size. If a predicate is k-wise uniform, Kothari et al. [KMOW17] showed that one can get SOS-hardness of refuting random instances of it when there are around n(k+1)/2 constraints. Indeed, [KMOW17] shows that if we have a predicate that is δ-close to k-wise uniform, then with roughly n(k+1)/2 random constraints, SOS cannot refute that a (1−O(δ))-fraction of constraints are satisfiable. This also motivates studying δ-closeness to k-wise uniformity and how it relates to Fourier coefficients. δ-closeness to k-wise uniformity is also relevant for hardness of random \CSP, as shown in [AOW15].

Alon et al. [AAK+07] investigated the Closeness Problem further by improving the upper bound to δ=O((nlogn)k/2\eps). Indeed, they showed a strictly stronger fact that a distribution is O(√\W1…k[φ]logk/2n)-close to some k-wise uniform, where \W1…k[φ]=∑1≤|S|≤k\whφ(S)2. Rubinfeld and Xie [RX13] generalized some of these results to non-uniform k-wise independent distributions over larger product spaces.

Though they did not mention it explicitly, they also give a lower bound for the Closeness Problem of δ≥Ω(n(k−1)/2logn\eps) for k>2 by considering the uniform distribution on a set of O(nk) random chosen strings. No previous work gave any lower bound for the most natural case of k=2.

In this paper, we show sharper upper and lower bounds for the Closeness Problem, which are tight for k even and k=1. Comparing to the result in [AAK+07], we get rid of the factor of (logn)k/2.

Any density φ over {−1,1}n is δ-close to some k-wise uniform distribution, where

For the special case k=1, the corresponding δ can be further improved to δ≤ϵ.

can be written as the feasibility of a linear program (LP). We upper bound

w by bounding the dual LP, using the hypercontractivity inequality.

Interestingly both our upper and lower bound utilize LP-duality, which we believe is the most natural way of looking at this problem.

We remark that we can derive a lower bound for odd

k from Theorem 1.2.2 trivially by replacing k by k−1. There exists a gap of √n between the resulting upper and lower bounds for odd k. We believe that the lower bound is tight, and the upper bound may be improvable by a factor of √n, as it is in the special case k=1. We leave it as a conjecture for further work: Suppose the distribution φ over {−1,1}n is (ϵ,k)-wise uniform. Then φ is δ-close to some k-wise uniform distribution in total variation distance, where

Another application of the Closeness Problem is to property testing of k-wise uniformity. Suppose we have sample access from an unknown and arbitrary distribution; we may wonder whether the distribution has a certain property. This question has received tremendous attention in the field of statistics. The main goal in the study of property testing is to design algorithms that use as few samples as possible, and to establish lower bound matching these sample-efficient algorithms. In particular, we consider the property of being k-wise uniform:

In this paper, we will refer to this question as the Testing Problem.

The papers [AGM03, AAK+07, Xie12] discussed the problem of testing k-wise uniformity. [AGM03] constructed a δ-tester for k-wise uniformity with sample complexity O(n2k/δ2), and [AAK+07] improved it to O(nklogk+1n/δ2). As for lower bounds, [AAK+07] showed that Ω(n(k−1)/2/δ) samples are necessary, albeit only for k>2. This lower bound is in particular for distinguishing the uniform distribution from δ-far-from-k-wise distributions.

: Estimate all Fourier coefficients up to level

k from the samples; if they are all smaller than ϵ then output “Yes”. In fact this algorithm is exactly attempting to check whether the distribution is (\eps,k)-wise uniform. Hence the sample complexity depends on the upper bound for the Closeness Problem. Therefore we can reduce the sample complexity of this algorithm down to O(nklognδ2) via our improved upper bound for the Closeness Problem. One logn factor remains because we need to union-bound over the O(nk) Fourier coefficients up to level k. To further get rid of the last logn factor, we present a new algorithm that estimates the Fourier weight up to level k, ∑1≤|S|≤kˆφ2(S), rather than estimating these Fourier coefficients one by one.

Any δ-tester for pairwise uniformity of distributions on {−1,1}n needs at least Ω(nδ2) samples.

For this lower bound we analyze a symmetric distribution with non-zero Fourier coefficients only on level 2. We prove that it is hard to distinguish a randomly shifted version of this distribution from the fully uniform distribution. This lower bound is also better than [AAK+07] in that we have a better dependence on the parameter δ (1δ2 rather than 1δ). Unfortunately we are unable to generalize our lower bound for higher k.

For any constant k, for testing whether a distribution is fully uniform or δ-far from every k-wise uniform distribution, there exists an algorithm with sample complexity O(k)k⋅nk/2⋅1δ2⋅(lognδ)k/2.

In fact, for testing whether a distribution is αk-wise uniform or δ-far from k-wise uniform with α>4, there exists an algorithm with sample complexity O(α)k/2⋅nk/2⋅1δ2⋅(nkδ4)1/(α−2).

We remark that testing full uniformity can be treated as a special case of testing αk-wise uniformity approximately, by setting α=lognδ.

The fully uniform distribution has the nice property that every pair of samples is different in n2±O(√n) bits with high probability when the sample size is small. Our algorithm first rejects those distributions that disobey this property. We show that the remaining distributions have small Fourier weight up to level 2k. Hence by following a similar analysis as the tester in Theorem 1.3, we can get an improved upper bound when these lower Fourier weights are small.

The lower bound remains the same as testing k-wise vs. far from k-wise. Our tester is tight up to a logarithmic factor for the pairwise case, and is tight up to a factor of ~O(√n) when k>2.

We compare our results and previous best known bounds from [AAK+07] in Table 1. (We omit constant factors depending on k.)

We use [n] to denote the set {1,…,n}. We denote the symmetric difference of two sets S and T by S⊕T. For Fourier analysis we use notations consistent with [O’D14]. Every function f:{−1,1}n→\R has a unique representation as a multilinear polynomial

where ∘ denotes entry-wise multiplication. The effect of convolution on Fourier coefficients is that ˆf∗g(S)=\whf(S)\whg(S).

When working with probability distribution on {−1,1}n, we prefer to define them via density function. A density function φ:{−1,1}n→\R≥0 is a nonnegative function satisfying \whφ(∅)=\E\bx∼{−1,1}n[φ(\bx)]=1. We write \by∼φ to denote that \by is a random variable drawn from the distribution φ, defined by

for all y∈{−1,1}n. We identify distributions with their density functions when there is no risk of confusion.

The following lemma about density functions of degree at most k derives from Fourier analysis and hypercontractivity.

Supposing H is a set of distributions, we denote

Its explicit formula is

For any integer k≥1, we have

The following are properties of hk(z):

We will treat the case of k=4i+2 for some integer i. The proof for the general case is similar. When k=4i+2, we can group adjacent terms into pairs:

The rest of proof is to show that such a ψ exists when w=ek√\W1…k[φ]. We can write the existence as an LP feasibility problem with variables ψ(x) for x∈{−1,1}n and constraints:

The original LP is feasible if and only if its dual LP is infeasible, by Farkas’ Lemma. This completes the proof, since when w=ek√\W1…k[φ], for any density function ψ′ with degree k we have

For k=1, further improvement can be achieved. We still try to use mixture distributions. Here we want to mix the distribution φ with indicator distributions on subsets of coordinates that have opposite biases to those of the original distribution.

We define φ′ as

Interestingly, our proof of the lower bound also utilizes LP duality. We can write the Closeness Problem in the form of linear programming with variables φ′(x) for x∈{−1,1}n, as follows:

We ignore the factor of 1/2 in the minimization for convenience in the following analysis.

Thus given a pair of Boolean functions p,q satisfying the constraints, the quantity ⟨φ,q⟩−\whp(∅) is a lower bound for our Closeness Problem. Our distribution φ achieving the lower bound is a symmetric polynomial, homogeneous of degree k (except that it has a constant term of 1, as is necessary for every density function). We can use Krawtchouk and Hermite polynomials to simplify the analysis.

Since \whp(∅)=0, the objective function of the dual LP is

where the last inequality holds by Cauchy–Schwarz. It is easy to calculate the inner products ⟨φ,p⟩=μ2, and

Then using Cauchy–Schwarz again, we get