On chromatic parameters of some Regular graphs

In this work, we try to enunciate the Total chromatic number of some Cayley graphs like the Cayley graph on Symmetric group, Alternating group, Dihedral group with respect to some generating sets and some other regular graphs. 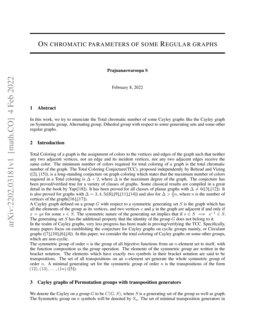 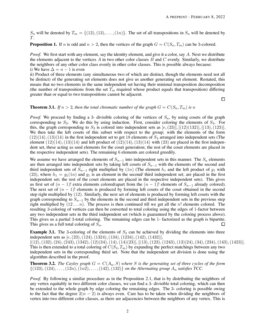 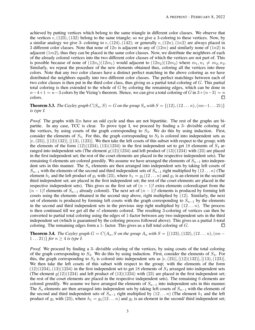 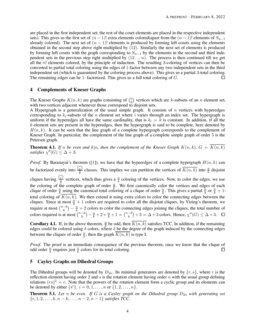 In this paper we study the relationships between the elementary abelian ...
Riccardo Aragona, et al. ∙

Simulations and the Lamplighter group

We introduce a notion of "simulation" for labelled graphs, in which edge...
Laurent Bartholdi, et al. ∙

Frames for Graph Signals on the Symmetric Group: A Representation Theoretic Approach

Breadth-first search on a Ramanujan graph

We consider the regular subgroups of the automorphism group of the linea...
I. Yu. Mogilnykh, et al. ∙

In this work, we try to enunciate the Total chromatic number of some Cayley graphs like the Cayley graph on Symmetric group, Alternating group, Dihedral group with respect to some generating sets and some other regular graphs.

Total Coloring of a graph is the assignment of colors to the vertices and edges of the graph such that neither any two adjacent vertices, nor an edge and its incident vertices, nor any two adjacent edges receive the same color. The minimum number of colors required for total coloring of a graph is the total chromatic number of the graph. The Total Coloring Conjecture(TCC), proposed independently by Behzad and Vizing ([2], [15]), is a long-standing conjecture on graph coloring which states that the maximum number of colors required in a Total coloring is Δ+2, where Δ is the maximum degree of the graph. The conjecture has been proved/verified true for a variety of classes of graphs. Some classical results are compiled in a great detail in the book by Yap([18]). It has been proved for all classes of planar graphs with Δ≠6([3],[12]). It is also proved for graphs with Δ=3,4,5([8],[9],[11],[14]) and also for Δ>23n, where n is the number of vertices of the graph([16],[17]). A Cayley graph defined on a group G with respect to a symmetric generating set S is the graph which has all the elements of the group as its vertices, and two vertices x and y in the graph are adjacent if and only if x=ys for some s∈S. The symmetric nature of the generating set implies that if s∈S⟹s−1∈S. The generating set S has the additional property that the identity of the group G does not belong to it. In the realm of Cayley graphs, very less progress has been made in proving/verifying the TCC. Specifically, many papers focus on establishing the conjecture for Cayley graphs on cyclic groups mainly, or Circulant graphs ([7], [10], [6], [4]). In this paper, we consider the total coloring of Cayley graphs on some other groups, which are non-cyclic. The symmetric group of order n is the group of all bijective functions from an n-element set to itself, with the function composition as the group operation. The elements of the symmetric group are written in the bracket notation. The elements which have exactly two symbols in their bracket notation are said to be transpositions. The set of all transpositions on an n-element set generate the whole symmetric group of order n. A minimal generating set for the symmetric group of order n is the transpositions of the form (12),(13),…,(1n) ([5]).

We first start with any element, say the identity element, and give it a color, say A. Next we distribute the elements adjacent to the vertices A in two other color classes B and C evenly. Similarly, we distribute the neighbors of any other color class evenly in other color classes. This is possible always because: i) We have Δ=n−1 is even ii) Product of three elements (any simultaneous two of which are distinct, though the elements need not all be distinct) of the generating set elements does not give us another generating set element. Restated, this means that no two elements in the same independent set having their minimal transposition decomposition (the number of transpositions from the set Tm required whose product equals that transposition) differing greater than or equal to two transpositions cannot be adjacent. ∎

If n>2, then the total chromatic number of the graph G=C(Sn,Tm) is n

The vertices of the full graph consist of two parts- the vertices e,s,s2,…,sn−1 and the vertices r,rs,rs2,…rsn−1. In order to color the vertices, we use the vertex coloring of the vertices {e,s,s2,…,si,…,sn−1},i∈N,0≤s≤n−1 (this set is can be also written as 0,1,2,…,n−1) induced from the total coloring of the same set of vertices. By using the result of Theorem 16 in Campos and de Mello ([4]), we get a coloring of the vertices using at most 2k+2 colors, which we denote χ. We can extend this vertex coloring to include all the vertices of the graph by taking left orbits of each independent set of vertices previously formed with respect to left multiplication with an element of the form rsj,j∈N,1≤j≤n−1. The orbits of one independent set are given the same color as any other independent set(other than the set of which the orbit was taken). Typically, for sake of convention, we give the orbits of the i-th independent set the same color as the i+1-th (modulo χ). This gives us the vertex coloring of all the graph vertices using at most χ colors. As for the edges of the graph, we can split the edges of G into two parts- i) The edges induced by the set S1={1,2,…,k,n−2,n−1} and ii)The edges induced by r. The edges induced by S1 form two copies of k-th powers of n-cycle. This part is colored similarly to the vertices by induction from the total coloring of this set of vertices which satisfies TCC from the result of Theorem 16 in Campos and de Mello ([4]). The edges induced by r form a connecting link between the two copies of powers of n-cycle. It is actually a 1-factor, which can be easily edge colored with an extra color. Hence, the total number of colors required will not exceed 2k+3 which verifies TCC for this class of graphs. ∎

Let T=T1∪T2 where T1⊂{0,1,2,…,n−1}. Let the circulant graph of order n with generating set T1 be total colorable with |T|+2 colors and each total independent set having vertices with the same difference (the difference between any pairs of vertices in an independent set is the same as that for the corresponding pair in any other independent set), and T2={rsi} where i belongs to any subset of {0,1,2,…,n−1} . Then, the Cayley graph on the Dihedral group D2n with respect to the generating set T satisfies TCC.

Here, let us assume s=1. Then, we could the elements rsa as ra.We first divide the vertices {0,1,…,n−1} into the |T1|+2 independent sets. Suppose, in addition, the first independent set has the vertices [0,a1,a2,a3,…ak] Now, we take orbits of left multiplication of the vertices colored previously with respect to an element rj,j∈{0,1,…,n−1} such that j≠i,i+d where d=|ai−aj| for ai in the first independent set. This would give us the vertex coloring of all vertices in the graph using |T1|+2 colors, because, on taking orbits, each of the adjacencies of the vertices in the coloring of circulant graph are excluded by the condition imposed on j. Since the remaining edges generated by the elements rsi are 1-factor, we could finish the total coloring of the whole graph with one extra color thereby giving us a total coloring with |T|+2 colors which then verifies the TCC for this class of graphs. ∎

Let T=T1∪T2 where T1⊂{0,1,2,…,n−1}. Let the circulant graph of order n with generating set T1 be total colorable with at most |T1|+2 colors and each total independent set having at most k vertices such that any two consecutive pairs of vertices in an independent set have the same difference d, and T2=¯¯¯¯¯T1−{ri,r(i+d),…,r(i+kd−k)}. Then, the Cayley graph on the Dihedral group D2n with respect to the generating set T satisfies TCC.

Let us index the independent sets of the vertex coloring of the total colorable circulant graph of order n with generating set T1 as Ij, where j ranges from 0 to |T1|+2. We first color the vertices {0,1,2,…,n−1} as in a total coloring of the circulant graph of order n with generating set T1. We extend this vertex coloring to the vertices of the full graph by forming orbits of the prior independent with elements of the form r(i−j) where j is the index of the independent set Ij. This will give us independent sets of the full graph. This is by virtue of the generating set T2 excluding elements of the form {ri,r(i+d),…r(i+kd−k)} whereby the adjacencies of any elements in the prior vertex coloring are excluded. Now, as regards the edge coloring, we use the similar edge coloring for the edges among the identical copies of vertices {0,1,2,…,n−1} and {r,r1,r2…,r(n−1}. For edges between the above two sets of vertices, as in the previous two theorems, we give one color for each generated by each element in T2. Therefore, we totally use at the most |T1|+|T2|+2=|T|+2 colors to totally color the graph, which thereby verifies TCC. ∎

The Kneser Graphs K(n,k) are graphs consisting of (nk) vertices which are k-subsets of an n element set, with two vertices adjacent whenever those correspond to disjoint sets. A Hypergraph is a generalization of the usual simple graph. It consists of n vertices with hyperedges corresponding to ki-subsets of the n element set where i varies through an index set. The hypergraph is uniform if the hyperedges all have the same cardinality, that is ki=k is constant. In addition, if all the k-element sets are present in the hyperedges, then the hypergraph is said to be complete, here denoted by H(n,k). It can be seen that the line graph of a complete hypergraph corresponds to the complement of Kneser Graph. In particular, the complement of the line graph of a complete simple graph of order 5 is the Petersen graph.

By Baranayai’s theorem ([1]), we have that the hyperedges of a complete hypergraph H(n,k) can be factorized evenly into (nk)nk classes. This implies we can partition the vertices of ¯¯¯¯¯¯¯¯¯¯¯¯¯¯¯¯¯¯K(n,k) into nk disjoint cliques having (nk)nk vertices, which thus gives a nk coloring of the vertices. Now, to color the edges, we use the coloring of the complete graph of order nk. We first canonically color the vertices and edges of each clique of order nk using the canonical total coloring of a clique of order nk. This gives a partial nk or nk+1-total coloring of ¯¯¯¯¯¯¯¯¯¯¯¯¯¯¯¯¯¯K(n,k). We then extend it using extra colors to color the connecting edges between the cliques. Since at most nk+1 colors are required to color all the disjoint cliques, by Vizing’s theorem, we require at most (n−kk)−nk+2 colors to color the connecting edges joining the cliques, the total number of colors required is at most (n−kk)−nk+2+nk+1=(n−kk)+3=Δ+3 colors. Hence, χ′′(G)≤Δ+3. ∎

The proof is an immediate consequence of the previous theorem, once we know that the clique of odd order nk requires just nk colors for its total coloring. ∎