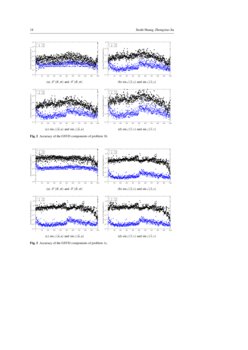 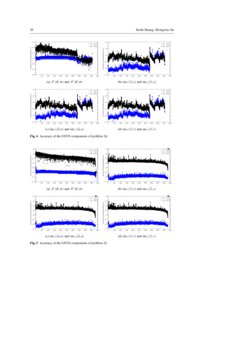 The joint bidiagonalization(JBD) process is a useful algorithm for the c...
Haibo Li, et al. ∙

Implicit Hari–Zimmermann algorithm for the generalized SVD on the GPUs

This paper is concerned with a curious phenomenon in spectral estimation...
Yuxin Chen, et al. ∙

The generalized singular value decomposition (GSVD) of a matrix pair was first introduced by van Loan van1976generalizing and then developed by Paige and Saunders paige1981towards . It has become a standard decomposition and an important computational tool golub2012matrix , and has been widely used in a wide range of contexts, e.g., solutions of discrete linear ill-posed problems hansen1998rank , weighted or generalized least squares problems bjorck1996numerical , information retrieval howland2003structure , linear discriminant analysis park2005relationship , and many others betcke2008generalized ; chu1987singular ; golub2012matrix ; kaagstrom1984generalized ; vanhuffel .

For a prescribed target τ, assume that the generalized singular values of (A,B) are labeled by

For a large and possibly sparse matrix pair (A,B), one kind of approach to compute desired GSVD components works on the pair directly. Zha zha1996 proposes a joint bidiagonalization method to compute the extreme generalized singular values σ and the associated generalized singular vectors u,v,x, which is a generalization of Lanczos bidiagonalization type methods jia2003implicitly ; jia2010 for computing a partial ordinary SVD of A when B=I. The main bottleneck of this method is that a large-scale least squares problem with the coefficient matrix [AB] must be solved at each step of the joint bidiagonalization. Jia and Yang jiayang2018 has made a further analysis on this method and its variant, and provided more theoretical supports for its rationale.

Another kind of commonly used approach formulates the GSVD as a generalized eigenvalue problem, solves it using an eigensolver parlett1998symmetric ; saad2011numerical ; stewart2001matrix , and recovers the desired GSVD components. There are two types of formulations. The first one is to apply an eigensolver to the cross product matrix pair (ATA,BTB) to compute the corresponding eigenpairs (σ2,x) and then recover the desired GSVD components from the computed eigenpairs zwaan2017generalized . However, because of the squaring of the generalized singular values of (A,B), for σ small, the eigenvalues σ2 of (ATA,BTB) are much smaller. As a consequence, the smallest generalized singular values may be recovered much less accurately and even may have no accuracy jia2006 . Therefore, we shall not consider such a formulation in this paper. The second type of formulation, which we shall consider in this paper, transforms the GSVD into the generalized eigenvalue problem of the augmented definite matrix pair

or the augmented definite matrix pair

As far as numerical computations are concerned, an important question arises naturally: which of the mathematically equivalent formulations (1.4) and (1.5) is numerically preferable, so that the desired GSVD components can be computed more accurately? In this paper, rather than proposing or developing any algorithm for computing the GSVD, we focus on this issue carefully and suggest a deterministic choice. We first make a sensitivity analysis on the eigenpairs of (1.4) and (1.5

This paper is organized as follows. In Section 2 we make a sensitivity analysis on the generalized eigenvalue problems of the augmented matrix pairs (ˆA,ˆB) and (˜B,˜A), respectively, and give error bounds for the generalized singular values σ

and the generalized eigenvectors of

Throughout this paper, denote by ∥⋅∥ the 2-norm of a vector or matrix and κ(C)=σmax(C)/σmin(C) the condition number of a matrix C with σmax(C) and σmin(C) being the largest and smallest singular values of C, respectively, and by CT the transpose of C. Denote by Ik

the identity matrix of order

k, by 0k and 0k×l the zero matrices of order k and k×l, respectively. The subscripts are omitted when there is no confusion. Also denote by R(C) the column space or range of C. In practice, the matrices A and B are usually scaled to have (approximately) the same length in 2-norm. When making an analysis, we always assume that A and B are already normalized such that σmax(A)=σmax(B)=1, which means that σ−1min(A)=κ(A) and σ−1min(B)=κ(B).

The generalized eigenvalue decompositions of the augmented matrix pairs (ˆA,ˆB) and (˜B,˜A) are closely related to the GSVD of (A,B) in the following way, which is straightforward to verify.

with Λ=Σ−1=SC−1 and W′=XC−1. Moreover, the columns of the eigenvector matrices Y and Z are ˆB- and ˜A-orthonormal, respectively, i.e.,

To this end, we need to carefully estimate the accuracy of the computed eigenpairs and that of the recovered GSVD components. Given a backward stable generalized eigensolver applied to (1.4) and (1.5), let (ˆσ,ˆy) and (1˜σ,˜z) be the computed approximations to (σ,y) and (1σ,z), respectively. Then (ˆσ,ˆy) and (1˜σ,˜z) are the exact eigenpairs of some perturbed matrix pairs

respectively, where the perturbations satisfy

for ϵ small. Typically, ϵ=O(ϵmach), the level of machine precision ϵmach, when the QZ algorithm golub2012matrix ; parlett1998symmetric ; stewart2001matrix is used for small to medium sized problems, or ϵ=O(ϵ1/2mach) when iterative projection algorithms are used for large problems. Here in (2.7), to distinguish from the exact augmented matrices defined in (1.4) and (1.5), we have used the bold letters to denote the perturbed matrices. Notice that the assumption ∥A∥=∥B∥=1 made in Section 1 means ∥ˆA∥=∥ˆB∥=∥˜A∥=∥˜B∥=1. As a consequence, (2.8) is equivalent to

In what follows, we will analyze how accurate the computed eigenpairs (ˆσ,ˆy) and (1˜σ,˜z) are for a given small ϵ.

2.1 Accuracy of the generalized singular values

we have the error bound

Notice from (2.9) that the perturbation terms in the right hand sides of both (2.13) and (2.14) are equally small and bounded by √2ϵ. Theorem 2.2 illustrates that the accuracy of the approximate generalized singular value ˆσ and that of ˜σ are determined by α and ∥x∥, and by β and ∥x∥, respectively. Apparently, a large ∥x∥ could severely impair the accuracy of both ˆσ and ˜σ. Fortunately, the following bounds show that ∥x∥ must be modest under some mild conditions.

Let X be the right generalized singular vector matrix of (A,B) as defined in (1.1) and x be an arbitrary column of X. Then

where the superscript † denotes the Moore-Penrose generalized inverse of a matrix, and

Assume that at least one of A and B is well conditioned.

Therefore, the numerators of the first factors in the right hand sides of (2.13) and (2.14) are modest and comparable, and it is their denominators that decide the size of the bounds in (2.13) and (2.14). As a consequence, in terms of Theorem 2.2 and Property 2.4, we can draw the following conclusions for the accurate computation of σ:

2.2 Accuracy of the generalized eigenvectors

Let σ and 1σ be the eigenvalues of (ˆA,ˆB) and (˜B,˜A) with the corresponding eigenvector matrices Y1 and Z1 satisfying YT1ˆBY1=Ik and ZT1˜AZ1=Ik, where the positive integer k is the multiplicity of σ and 1σ. Assume that ˆσ and 1˜σ are the eigenvalues of the perturbed matrix pairs (ˆA+ˆE,ˆB+ˆF) and (˜B+˜F,˜A+˜E) with the perturbations satisfying (2.8), and that the corresponding (unnormalized) eigenvectors are written as y+Δy and z+Δz with Δy and Δz satisfying YT1ˆBΔy=0 and ZT1˜AΔz=0, where y∈R(Y1) and z∈R(Z1) with yTˆBy=1 and zT˜Az=1 are the eigenvectors of (ˆA,ˆB) and (˜B,˜A) corresponding to σ and 1σ, respectively. Then the following bounds hold within O(ϵ2):

where Δσ:=˜σ−σ, and Δ2y:=Δσ(ˆF(y+Δy)+ˆBΔy) is a second order small term, i.e., ∥Δ2y∥=O(ϵ2). Let the generalized eigenvalue decomposition of (ˆA,ˆB) be written by (2.1) and the eigenvalue matrix and eigenvector matrix be partitioned as ˆΣ=[σIkˆΣ2] and Y=[Y1Y2]. Then we have

Since ˆΣ2−σI is nonsingular, we have

where Δ2h=(ˆΣ2−σI)−1YT2Δ2y is a second order small term. As a consequence, taking norms on the two hand sides of the above equation, we obtain

By definition, the sine of the angle between y+Δy and y satisfies

Following the same derivations as above, we obtain (2.18). ∎

Theorem 2.5 gives accuracy estimates for the approximate generalized eigenvectors of the matrix pairs (ˆA,ˆB) and (˜B,˜A). It presents the results in the form of the augmented matrix pairs. For our use in the GSVD context, substituting the definitions of (ˆA,ˆB) and (˜B,˜A) in (1.4) and (1.5) as well as their eigenvectors in (2.2) and (2.3) into Theorem 2.5, we can present the results in terms of the generalized singular values of (A,B) and the matrices A and B directly.

With the notations of Theorem 2.2 and Theorem 2.5, let ˆy and ˜z be the normalized approximations to y and z, respectively. Then the following results hold within O(ϵ2):

where the σi are the generalized singular values of (A,B) other than σ.

For y and ˆy, it is direct from Theorem 2.5 that

where the σi are the generalized singular values of (A,B) other than σ. On the other hand, by definition (1.4) of ˆB and the assumption ∥ˆB∥=1, we have

To prove this theorem, we need the following lemma.

We classify the interval of

Summarizing the above establishes (2.29). ∎

Denote by σl and σr the generalized singular values of (A,B) that minimize |1−σiσ| and <sp