On Certifying Robustness against Backdoor Attacks via Randomized Smoothing 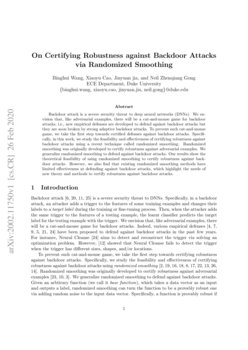 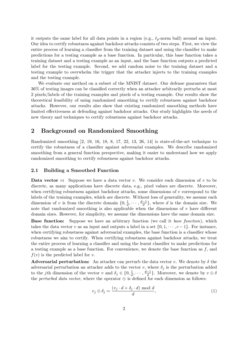 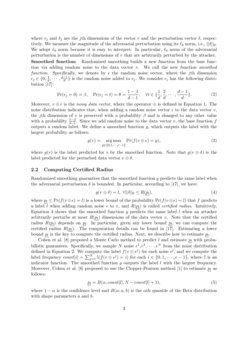 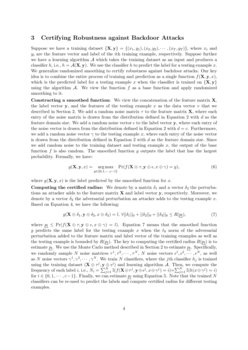 Backdoor attack [6, 20, 11, 25] is a severe security threat to DNNs. Specifically, in a backdoor attack, an attacker adds a trigger to the features of some training examples and changes their labels to a target label

during the training or fine-tuning process. Then, when the attacker adds the same trigger to the features of a testing example, the learnt classifier predicts the target label for the testing example with the trigger. We envision that, like adversarial examples, there will be a cat-and-mouse game for backdoor attacks. Indeed, various empirical defenses

), which takes a data vector as an input and outputs a label, randomized smoothing can turn the function to be a provably robust one via adding random noise to the input data vector. Specifically, a function is provably robust if it outputs the same label for all data points in a region (e.g.,

Data vector v:  Suppose we have a data vector v. We consider each dimension of v to be discrete, as many applications have discrete data, e.g., pixel values are discrete. Moreover, when certifying robustness against backdoor attacks, some dimensions of v correspond to the labels of the training examples, which are discrete. Without loss of generality, we assume each dimension of v is from the discrete domain {0,1d,⋯,d−1d}, where d is the domain size. We note that randomized smoothing is also applicable when the dimensions of v have different domain sizes. However, for simplicity, we assume the dimensions have the same domain size.

Moreover, v⊕ϵ is the noisy data vector, where the operator ⊕ is defined in Equation 1. The noise distribution indicates that, when adding a random noise vector ϵ to the data vector v, the jth dimension of v

is preserved with a probability

β and is changed to any other value with a probability 1−βd−1. Since we add random noise to the data vector v, the base function f outputs a random label. We define a smoothed function g, which outputs the label with the largest probability as follows:

Randomized smoothing guarantees that the smoothed function g predicts the same label when the adversarial perturbation δ is bounded. In particular, according to [17], we have:

where pl––≤Pr(f(v⊕ϵ)=l) is a lower bound of the probability Pr(f(v⊕ϵ)=l) that f predicts a label l when adding random noise ϵ to v, and R(pl––) is called certified radius. Intuitively, Equation 4 shows that the smoothed function g predicts the same label l when an attacker arbitrarily perturbs at most R(pl––) dimensions of the data vector v. Note that the certified radius R(pl––) depends on pl––. In particular, given any lower bound pl––, we can compute the certified radius R(pl––). The computation details can be found in [17]

pl–– is the key to compute the certified radius. Next, we describe how to estimate pl––.

Cohen et al. [8] proposed a Monte Carlo method to predict l and estimate pl–– with probabilistic guarantees. Specifically, we sample N noise ϵ1,ϵ2,⋯,ϵN from the noise distribution defined in Equation 2. We compute the label f(v⊕ϵj) for each noise ϵj, and we compute the label frequency count[i]=∑Nj=1I(f(v⊕ϵj)=i) for each i∈{0,1,⋯,c−1}, where I is an indicator function. The smoothed function g outputs the label l with the largest frequency. Moreover, Cohen et al. [8] proposed to use the Clopper-Pearson method [1] to estimate pl–– as follows:

where 1−α is the confidence level and B(α;a,b) is the α

th quantile of the Beta distribution with shape parameters

Suppose we have a training dataset {X,y}={(x1,y1),(x2,y2),⋯,(xT,yT)}, where xi and yi are the feature vector and label of the ith training example, respectively. Suppose further we have a learning algorithm A which takes the training dataset as an input and produces a classifier h, i.e., h=A(X,y). We use the classifier h to predict the label for a testing example x. We generalize randomized smoothing to certify robustness against backdoor attacks. Our key idea is to combine the entire process of training and prediction as a single function f(X,y,x), which is the predicted label for a testing example x when the classifier is trained on {X,y} using the algorithm A. We view the function f as a base function and apply randomized smoothing to it.

where g(X,y,x) is the label predicted by the smoothed function for x.

where pl––≤Pr(f(X⊕τ,y⊕ϵ,x⊕γ)=l). Equation 7 means that the smoothed function g predicts the same label for the testing example x when the ℓ0 norm of the adversarial perturbation added to the feature matrix and label vector of the training examples as well as the testing example is bounded by R(pl––). The key to computing the certified radius R(pl––) is to estimate pl––. We use the Monte Carlo method described in Section 2 to estimate pl––. Specifically, we randomly sample N noise matrices τ1,τ2,⋯,τN, N noise vectors ϵ1,ϵ2,⋯,ϵN, as well as N noise vectors γ1,γ2,⋯,γN. We train N classifiers, where the jth classifier hj is trained using the training dataset (X⊕τj,y⊕ϵj) and learning algorithm A. Then, we compute the frequency of each label i, i.e., Ni=∑Nj=1I(f(X⊕τj,y⊕ϵj,x⊕γj)=i)=∑Nj=1I(h(x⊕γj)=i) for i∈{0,1,⋯,c−1}. Finally, we can estimate pl–– using Equation 5. Note that the trained N classifiers can be re-used to predict the labels and compute certified radius for different testing examples.

Experimental setup:  We use a subset of the MNIST dataset [15] which only contains the handwritten digits ”1” and ”7” and is used for binary classification. Each digit image has a size 28∗28 and has normalized pixel values within {0,1/255,2/255,⋯,1}

. For simplicity, we binarize the pixel values in our experiment. Specifically, if a pixel value is smaller than 0.5, we set it to be 0, otherwise we set it to be 1. Moreover, we randomly select 100 digits from the subset of the MNIST dataset to form the training dataset and randomly select another 1,000 digits as the testing examples. We use a two-layer neural network as the classifier.

Evaluation metric:  We use certified accuracy

Experimental results:  Figure 1 shows the certified accuracy of our method against backdoor attacks with β=0.9, N=10,000, and 1−α=99.9%. Our method guarantees that 36% of testing images can be classified correctly when an attacker arbitrarily perturbs at most 2 pixels/labels of the training examples and pixels of a testing example.