We consider the stochastic heat equation whose solution is observed discretely in space and time. An asymptotic analysis of power variations is presented including the proof of a central limit theorem. It generalizes the theory from arXiv:1710.03519 in several directions. 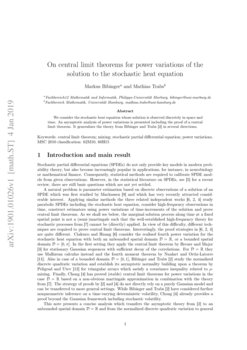 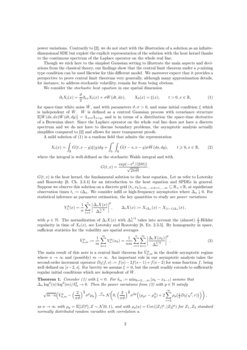 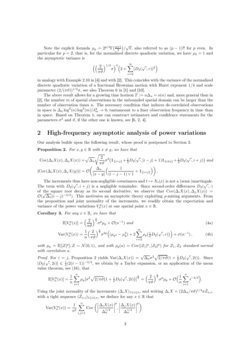 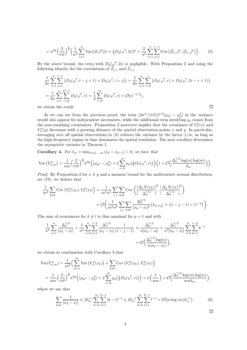 Blow up in a periodic semilinear heat equation

For a finite function class we describe the large sample limit of the se...
Dmitry B. Rokhlin, et al. ∙

On quadratic variations of the fractional-white wave equation

This paper studies the behaviour of quadratic variations of a stochastic...
Radomyra Shevchenko, et al. ∙

Generalizing an idea of Davie and Gaines (2001), we present a method for...
Florian Hildebrandt, et al. ∙

In this paper, we establish a generalization of the classical Central Li...
Xiang Cheng, et al. ∙

Stochastic partial differential equations (SPDEs) do not only provide key models in modern probability theory, but also become increasingly popular in applications, for instance, in neurobiology or mathematical finance. Consequently, statistical methods are required to calibrate SPDE models from given observations. However, in the statistical literature on SPDEs, see

[5] for a recent review, there are still basic questions which are not yet settled.

[10] and which has very recently attracted considerable interest. Applying similar methods the three related independent works [6, 2, 4] study parabolic SPDEs including the stochastic heat equation, consider high-frequency observations in time, construct estimators using power variations of time-increments of the solution and prove central limit theorems. As we shall see below, the marginal solution process along time at a fixed spatial point is not a (semi-)martingale such that the well-established high-frequency theory for stochastic processes from [8] cannot be (directly) applied. In view of this difficulty, different techniques are required to prove central limit theorems. Interestingly, the proof strategies in [6, 2, 4] are quite different. Cialenco and Huang [6] consider the realised fourth power variation for the stochastic heat equation with both an unbounded spatial domain D=R, or a bounded spatial domain D=[0,π]. In the first setting they apply the central limit theorem by Breuer and Major [3] for stationary Gaussian sequences with sufficient decay of the correlations. For D=[0,π]

, they use Malliavin calculus instead and the fourth moment theorem from

[12]. Also in case of a bounded domain D=[0,1], with Dirichlet boundary conditions, Bibinger and Trabs [2] study the normalized discrete quadratic variation and establish its asymptotic normality building upon a theorem by Peligrad and Utev [14] for triangular arrays which satisfy a covariance inequality related to ρ-mixing. Finally, Chong [4] has proved (stable) central limit theorems for power variations in the case D=R, based on a non-obvious martingale approximation in combination with the theory from [8]. The strategy of proofs by [2] and [4] do not directly rely on a purely Gaussian model and can be transferred to more general settings. While [2] considers further nonparametric inference on a time-varying deterministic volatility, [4] already provides a proof beyond the Gaussian framework including stochastic volatility.

This note presents a concise analysis which transfers the asymptotic theory from [2] to an unbounded spatial domain D=R, and from the normalized discrete quadratic variation to general power variations. Contrarily to [2], we do not start with the illustration of a solution as an infinite-dimensional SDE but exploit the explicit representation of the solution with the heat kernel thanks to the continuous spectrum of the Laplace operator on the whole real line. We stick here to the simplest Gaussian setting to illustrate the main aspects and deviations from the classical theory. Our findings show that the central limit theorem under a ρ-mixing type condition used in [2] for the case with a bounded spatial domain can be used likewise for this different model with unbounded spatial domain. We moreover expect that it provides a perspective to prove central limit theorems very generally, although many approximation details, for instance, to address stochastic volatility, remain far from being obvious. We consider the stochastic heat equation in one spatial dimension

˙W, and with parameters ϑ,σ>0, and some initial condition ξ which is independent of ˙W. ˙W is defined as a centred Gaussian process with covariance structure E[˙W(s,x)˙W(t,y)]=1s=t1x=y, and is in terms of a distribution the space-time derivative of a Brownian sheet. Since the Laplace operator on the whole real line does not have a discrete spectrum and we do not have to discuss boundary problems, the asymptotic analysis actually simplifies compared to [2] and allows for more transparent proofs.

for t⩾0,x∈R, where the integral is well-defined as the stochastic Walsh integral and with

G(t,x) is the heat kernel, the fundamental solution to the heat equation. Let us refer to [9, Ch. 2.3.1] for an introduction to the heat equation and SPDEs in general. Suppose we observe this solution on a discrete grid (ti,xk)i=0,…,n;k=1,…,m⊆R+×R, at equidistant observation times ti:=iΔn. We consider infill or high-frequency asymptotics where Δn↓0. For statistical inference on the parameters in (1), the key quantities to study are power variations

with p∈N. The normalization of ΔiX(x) with Δ1/4n takes into account the (almost) 14-Hölder regularity in time of Xt(x), see [9, Ex. 2.3.5]. By homogeneity in space, statistics to consider for volatility estimation are spatial averages

The main result of this note is a central limit theorem for ¯Vpn,m in the double asymptotic regime where n→∞ and (possibly) m→∞. An important role in our asymptotic analysis is played by the second-order increment operator D2(f,s):=f(s)−2f(s−1)+f(s−2) for some function f, being well defined on [s−2,s]. For brevity we assume ξ=0, but the result readily extends to sufficiently regular initial conditions which are independent of ˙W.

Note the explicit formula μp=2p/2Γ(p+12)/√π, also referred to as (p−1)!! for p even. In particular for p=2, that is, for the normalized discrete quadratic variation, we have μ2=1 and the asymptotic variance is

in analogy with Example 2.11 in [4] and with [2]. This coincides with the variance of the normalized discrete quadratic variation of a fractional Brownian motion with Hurst exponent 1/4 and scale parameter (2/(πϑ))1/4σ, see also Theorem 6 in [1] and [11].

The above result allows for a growing time horizon T:=nΔn=O(n) and, more general than in [2], the number m of spatial observations in the unbounded spatial domain can be larger than the number of observation times n. The relevant condition that induces de-correlated observations in space is Δn/δ2m→0, tantamount to a finer observation frequency in time than in space. Based on Theorem 1, one can construct estimators and confidence statements for the parameters σ2 and ϑ, if the other one is known, see [6, 2, 4]. If no parameter is known apriori, [2, Sec. 5] show that the “viscosity-adjusted volatility” σ2√2/ϑ can be estimated consistently, also noted in [4, Sec. 2.3].

Our analysis builds upon the following result, whose proof is postponed to Section 3.

The increments thus have non-negligible covariances and t↦Xt(x) is not a (semi-)martingale. The terms D2(√⋅,i+j) will turn out to be asymptotically negligible in the variance of the power variations. Since second-order differences D2(√⋅,⋅) of the square root decay as its second derivative, we observe that Cov(ΔiX(x),ΔjX(x))=O(√Δn(i−j)−3/2). This motivates an asymptotic theory exploiting ρ-mixing arguments. From the proposition and joint normality of the increments, we readily obtain the expectation and variance of the power variations Vpn(x) at one spatial point x∈R.

Using the joint normality of the increments (ΔiX)1⩽i⩽n, and writing ΔiX=(2Δn/πϑ)1/4σ~Zx,i, with a tight sequence (~Zx,i)1⩽i⩽n, we deduce for any x∈R that

By the above bound, the term with D2(√⋅,2i) is negligible such that Var(~Zx,i)≈1 up to this negligible term. For the covariance terms, we use Proposition 2 to obtain

The first equality comes from approximating the variances by one and the second approximation is based on the Hermite expansion of absolute power functions (15) with Hermite rank 2, see also [1, (A.6)]. The last estimate follows from

As we can see from the previous proof, the term (2σ4/(πϑ))p/2(μ2p−μ2p) in the variance would also appear for independent increments, while the additional term involving ρp comes from the non-vanishing covariances. Proposition 2 moreover implies that the covariance of Vpn(x) and Vpn(y) decreases with a growing distance of the spatial observation points x and y. In particular, averaging over all spatial observations in (3) reduces the variance by the factor 1/m, as long as the high-frequency regime in time dominates the spatial resolution. The next corollary determines the asymptotic variance in Theorem 1.

Under the conditions of Theorem 1, we have that

For U1,U2 bivariate Gaussian with correlation a and variances σ21 and σ22, we exploit the inequality

with some constant Cp, which is based on the Hermite expansion (15) and given in Equation (4) of [7], see also Lemma 3.3 of [13]. By this inequality and Proposition 2 for x≠y, we deduce that

we obtain in combination with Corollary 3 that

under the condition Δnδ−2m→0, where we use that

We turn to the proof of the central limit theorem transferring the strategy from [2] to our model. Define the triangular array

Therefore, Theorem 1 follows if the conditions (A) to (C) are verified. (C) is a ρ-mixing type condition generalizing the more restrictive condition from [16] that the triangular array is ρ-mixing with a certain decay of the mixing coefficients.

Proof of Theorem 1 (A) follows from Proposition 2. More precisely, we can verify analogously to the proofs of the Corollaries 3 and 4 that

and we obtain that

(B) is implied by the Lyapunov condition, since the normal distribution of ΔiX(xk) yields with some constant C that

(C) Define Qba:=∑bi=aZn,i. For a decomposition Qcb+u:=∑ci=b+uZn,i=A1+A2, where A2 is independent of Qba, an elementary estimate with the Cauchy-Schwarz inequality shows that

where A2 is indeed independent from Qba.

This auxiliary lemma is proved in Section 3. In combination with Var(Qcb+u)⩾ϖ(c−b−u+1)n, with some constant ϖ>0, and (6), we obtain condition (C):

This completes the proof of the central limit theorem for ∑ni=1Zn,i and Theorem 1. □

Based on that, we determine the terms in (9). Setting

Similarly, we have for j<i that