On Approximating Discontinuous Solutions of PDEs by Adaptive Finite Elements 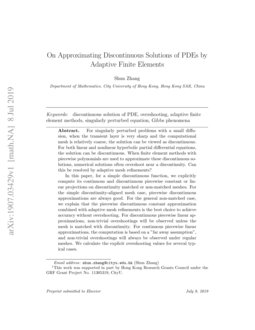 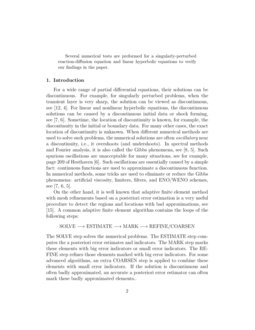 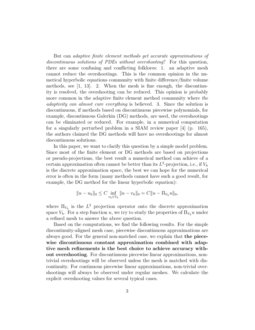 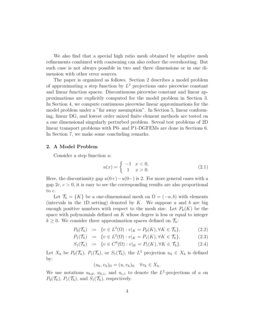 Projection in negative norms and the regularization of rough linear functionals

For a wide range of partial differential equations, their solutions can be discontinuous. For example, for singularly perturbed problems, when the transient layer is very sharp, the solution can be viewed as discontinuous, see RST:08 ; FR:11 . For linear and nonlinear hyperbolic equations, the discontinuous solutions can be caused by a discontinuous initial data or shock forming, see HW:08 ; Hesthaven:18 . Sometime, the location of discontinuity is known, for example, the discontinuity in the initial or boundary data. For many other cases, the exact location of discontinuity is unknown. When different numerical methods are used to solve such problems, the numerical solutions are often oscillatory near a discontinuity, i.e., it overshoots (and undershoots). In spectral methods and Fourier analysis, it is also called the Gibbs phenomena, see HH:79 ; GS:97 . Such spurious oscillations are unacceptable for many situations, see for example, page 209 of Hesthaven Hesthaven:18 . Such oscillations are essentially caused by a simple fact: continuous functions are used to approximate a discontinuous function. In numerical methods, some tricks are used to eliminate or reduce the Gibbs phenomena: artificial viscosity, limiters, filters, and ENO/WENO schemes, see HW:08 ; Hesthaven:18 ; GS:97 .

On the other hand, it is well known that adaptive finite element method with mesh refinements based on a posteriori error estimation is a very useful procedure to detect the regions and locations with bad approximations, see

But can adaptive finite element methods get accurate approximations of discontinuous solutions of PDEs without overshooting? For this question, there are some confusing and conflicting folklores: 1. an adaptive mesh cannot reduce the overshootings. This is the common opinion in the numerical hyperbolic equations community with finite difference/finite volume methods, see BO:84 ; Shu:98

. 2. When the mesh is fine enough, the discontinuity is resolved, the overshooting can be reduced. This opinion is probably more common in the adaptive finite element method community where

the adaptivity can almost cure everything is believed. 3. Since the solution is discontinuous, if methods based on discontinuous piecewise polynomials, for example, discontinuous Galerkin (DG) methods, are used, the overshootings can be eliminated or reduced. For example, in a numerical computation for a singularly perturbed problem in a SIAM review paper FR:11 (p. 165), the authors claimed the DG methods will have no overshootings for almost discontinuous solutions.

In this paper, we want to clarify this question by a simple model problem. Since most of the finite element or DG methods are based on projections or pseudo-projections, the best result a numerical method can achieve of a certain approximation often cannot be better than its L2-projection, i.e., if Vh is the discrete approximation space, the best we can hope for the numerical error is often in the form (many methods cannot have such a good result, for example, the DG method for the linear hyperbolic equation):

where ΠVh is the L2 projection operator onto the discrete approximation space Vh. For a step function u, we try to study the properties of ΠVhu under a refined mesh to answer the above question.

We also find that a special high ratio mesh obtained by adaptive mesh refinements combined with coarsening can also reduce the overshooting. But such case is not always possible in two and three dimensions or in one dimension with other error sources.

The paper is organized as follows. Section 2 describes a model problem of approximating a step function by L2 projections onto piecewise constant and linear function spaces. Discontinuous piecewise constant and linear approximations are explicitly computed for the model problem in Section 3. In Section 4, we compute continuous piecewise linear approximations for the model problem under a ”far away assumption”. In Section 5, linear conforming, linear DG, and lowest order mixed finite element methods are tested on a one dimensional singularly perturbed problem. Seveal test problems of 2D linear transport problems with P0- and P1-DGFEMs are done in Sections 6. In Section 7, we make some concluding remarks.

Consider a step function u:

Here, the discontinuity gap u(0+)−u(0−) is 2. For more general cases with a gap 2c, c>0, it is easy to see the corresponding results are also proportional to c.

Let Th={K} be a one-dimensional mesh on Ω=(−a,b) with elements (intervals in the 1D setting) denoted by K. We suppose a and b are big enough positive numbers with respect to the mesh size. Let Pk(K) be the space with polynomials defined on K whose degree is less or equal to integer k≥0. We consider three approximation spaces defined on Th:

A simple computation shows that the constant projection of u on the interval I0 is:

It is obvious that −1≤1−2t≤1 for t∈[0,1], thus there is no overshooting. If t=0 or 1, which corresponds to the cases that the discontinuity is matched with the mesh, the numerical approximation is exact.

Compute the L2 error in the interval I0, we have,

With a good a posteriori error estimator that can identify the bad approximated elements, the discontinuity-crossing elements will be found and divided. The L2 and other integration based norms of error will become smaller and smaller. Thus, for this case, the adaptive finite element methods do can achieve accuracy without overshooting.

Note that all terms of the matrix problem can be computed exactly. Solve the projection problem, we get

It is easy to show that

The overshooting value can be defined as the following function:

Compute the L2 error in the interval I0, we have,

Thus, for discontinuous approximations, even though that the L2-norm of error of the P1 approximation is better than the P0 approximation, they are of the same order if the mesh is not aligned, and the overshooting cannot be avoided in most cases.

We first test on a uniform mesh with h=1/N and x±i=±ih. We observe a consistent pattern is observed fore different h.

The value of U1 can be obtained by a simple projection:

The L2 errors in the two adjacent elements of 0 is also easy to compute,

In this subsection, we consider the case that that the mesh is not matched with the discontinuity. From the above discussion, we notice that the size of each element is not essential (their ratio is more important, see the example below).

The overshooting value is defined as the following function:

We have the following L2 error:

With this mesh setting and assuming the values of uc,1 at x±3 are exact, by a similar procedure, we get

We show the result on the right of Fig.4, the overshooting value lies in the interval

Also, as before, we find that the maximum overshooting happens at U1 when 0<t<1/2, and it happens at U−1 when 1/2<t<1. For any choice of 0<t<1, the overshooting is non-trivial. We can vary the element size of elements adjacent I0 from h, 2h, 4h, to 8h, and get similar results of non-trivial overshootings. This shows that adaptive mesh refinements by bisection will not make the overshooting phenomena disappear for the continuous linear approximation.

We have the following L2 error:

For the one dimensional problem, there is one special case that the overshooting phenomena can be eliminated.

Computed by projection, we get

This means when the ratio c>1 is big enough, the overshooting value can be reduced to a very small value. For a one dimensional mesh, this is possible by combining the refining and coarsening, i.e., when an a posteriori error indicator on an element K is big, then element is refined, while for those elements with small indicators, they are combined with the close elements to form bigger elements.

Note that such case will only happen in one dimensional setting. In two and three dimensions, if we have to keep the mesh conforming and regular, the radio of mesh sizes between two adjacent elements sharing a same edge/face cannot be big, thus there will always be non-trivial overshootings. Even for one dimensional problems, such high ratio mesh is probably not possible due to other approximation errors to keep the mesh from coarsening, see a numerical test in Section 5.

We choose ϵ=10−16. For ϵ this small, the solution is almost identical to f, and has an extremely sharp layer at x=1/2. For the case that mesh size is not small enough to match with the layer, x=1/2 can be viewed as a discontinuity location.

We choose the approximation spaces to be S1 and P0 for σ and u, respectively.

This is the L2-projection to P0(Th) for a very small ϵ.

For a similar problem, in the bottom page 165 of FR:11 , the authors claimed that the DG method for this problem will have no oscillations. This is incorrect, the DG method will have no oscillations unless the discontinuity is matched with the mesh. The numerical test in FR:11 uses a uniform mesh with h=1/N, which is exactly the discontinuity matched case. Thus, the non-overshooting in FR:11 is not only due to the use of DGFEM, but because of using DGFEM on a discontinuity-matched mesh.

We should point out that it is not always possible to get a high ratio mesh such as that in of Fig. 7 with a combination of an adaptive refinement and coarsening. We test the problem with the righthand side:

Note that for the linear finite element approximation, there is some approximation error on all elements. Thus these elements are not coarsened, we eventually have a standard adaptively refined mesh and overshooting phenomena appears, see Fig. 8.

is a vector-valued function defined on

We use a residual type of error estimator similar to that developed in Burman:09 to drive the adaptive mesh refinement.

6.1 A discontinuous solution on a non-matching mesh

The initial mesh is shown on the left of Fig. 9. The point (π/3,0) and (1,1) are the bottom central node and the top central node, respectively. The mesh and its subsequent bisection mesh are not aligned with the discontinuity although the inflow boundary condition is matched.

From the figure, we see that the overshooting values are oscillate between 0.3 and 0.6 and never goes to zero with the mesh refinements.

When ϵ=10−10, the layer is never fully resolved in our experiments and can be viewed as discontinuous. In Fig. 13, we show numerical solutions by P0- and P1-DGFEMs. It is easy to see that there is no overshooting for the P0-DGFEM solution, and non-trivial overshooting can be found for the P1-DGFEM solution.

Similar results are available for these three numerical tests with H(div) flux based least-squares finite element formulations can be found in LZ:18 .

For a singularly perturbed problem with a small diffusion or other equations with a transient layer, when the mesh is fine enough around the transient layer, the numerical solution can accurately approximate the PDE solution. This is the case that the belief that the adaptive finite element works come from.

For a pre-asymptotic mesh of such layer problems, the solution can be viewed as discontinuous and we can treat it identically as the genuinely discontinuous case.

The non-trivial overshooting we find in the paper is of the same magnitude as the Gibbs phenomena in the Fourier analysis, where a number around 0.17 of the jump gap is found, see HH:79 .

With the above results in mind, when we design finite element methods for problems with unknown location discontinuous solutions, an hp adaptivity approach is preferred. We use high order finite elements (continuous or discontinuous) in the smooth region and use piecewise constant approximations in the discontinuity-crossing elements. This is one of our ongoing work. It is also worth to mention that the method proposed by Lax Lax:06 is exactly such a method in the context of the finite difference method.