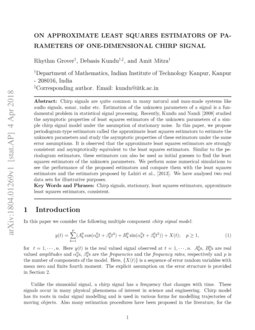 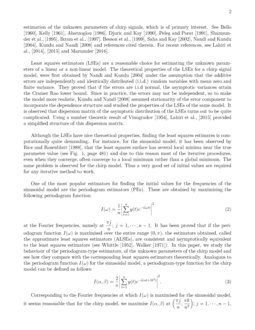 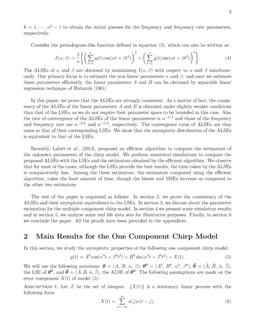 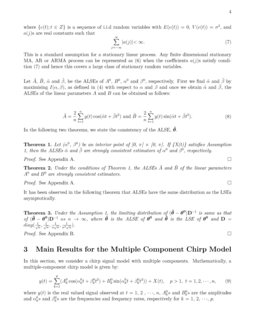 In this paper we consider the following multiple component chirp signal model:

for  t=1,⋯,n. Here y(t) is the real valued signal observed at t=1,⋯,n. A0ks, B0ks are real valued amplitudes and α0ks, β0ks are the frequencies and the frequency rates, respectively and p is the number of components of the model. Here, {X(t)}

is a sequence of error random variables with mean zero and finite fourth moment. The explicit assumption on the error structure is provided in Section

Unlike the sinusoidal signal, a chirp signal has a frequency that changes with time. These signals occur in many physical phenomena of interest in science and engineering. Chirp model has its roots in radar signal modelling and is used in various forms for modelling trajectories of moving objects. Also many estimation procedures have been proposed in the literature, for the estimation of the unknown parameters of chirp signals, which is of primary interest. See Bello [1960], Kelly [1961], Abatzoglou [1986], Djuric and Kay [1990], Peleg and Porat [1991], Shamsunder et al., [1995], Ikram et al., [1997], Besson et al., [1999], Saha and Kay [2002], Nandi and Kundu [2004], Kundu and Nandi [2008] and references cited therein. For recent references, see Lahiri et al., [2014], [2015] and Mazumder [2016].

Least squares estimators (LSEs) are a reasonable choice for estimating the unknown parameters of a linear or a non-linear model. The theoretical properties of the LSEs for a chirp signal model, were first obtained by Nandi and Kundu [2004]

under the assumption that the additive errors are independently and identically distributed (i.i.d.) random variables with mean zero and finite variance. They proved that if the errors are i.i.d normal, the asymptotic variances attain the Cramer Rao lower bound. Since in practice, the errors may not be independent, so to make the model more realistic, Kundu and Nandi

[2008] assumed stationarity of the error component to incorporate the dependence structure and studied the properties of the LSEs of the same model. It is observed that dispersion matrix of the asymptotic distribution of the LSEs turns out to be quite complicated. Using a number theoretic result of Vinogradov [1954], Lahiri et al., [2015] provided a simplified structure of this dispersion matrix.

Although the LSEs have nice theroetical properties, finding the least squares estimates is computationally quite demanding. For instance, for the sinusoidal model, it has been observed by Rice and Rosenblatt [1988], that the least squares surface has several local minima near the true parameter value (see Fig. 1, page 481) and due to this reason most of the iterative procedures, even when they converge, often converge to a local minimum rather than a global minimum. The same problem is observed for the chirp model. Thus a very good set of initial values are required for any iterative method to work.

One of the most popular estimators for finding the initial values for the frequencies of the sinusoidal model are the periodogram estimators (PEs). These are obtained by maximizing the following periodogram function:

Corresponding to the Fourier frequencies at which I(ω) is maximised for the sinusoidal model, it seems reasonable that for the chirp model, we maximise I(α,β) at (πjn,πkn2); j=1,⋯,n−1, k=1,⋯,n2−1 to obtain the initial guesses for the frequency and frequency rate parameters, respectively.

Consider the periodogram-like function defined in equation (3), which can also be written as:

can be obtained by separable linear regression technique of Richards

In this paper, we prove that the ALSEs are strongly consistent. As a matter of fact, the consistency of the ALSEs of the linear parameters A and B is obtained under slightly weaker conditions than that of the LSEs, as we do not require their parameter space to be bounded in this case. Also the rate of convergence of the ALSEs of the linear parameters is n−1/2 and those of the frequency and frequency rate are n−3/2 and n−5/2, respectively. The convergence rates of ALSEs are thus same as that of their corresponding LSEs. We show that the asymptotic distribution of the ALSEs is equivalent to that of the LSEs.

The rest of the paper is organised as follows. In section 2, we prove the consistency of the ALSEs and their asymptotic equivalence to the LSEs. In section 3, we discuss about the parameter estimation for the multiple component chirp model. In section 4 we present some simulation results and in section 5, we analyze some real life data sets for illustrative purposes. Finally, in section 6 we conclude the paper. All the proofs have been provided in the appendices.

2 Main Results for the One Component Chirp Model

In this section, we study the asymptotic properties of the following one component chirp model:

This is a standard assumption for a stationary linear process. Any finite dimensional stationary MA, AR or ARMA process can be represented as (6) when the coefficients a(j)s satisfy condition (7) and hence this covers a large class of stationary random variables. Let ~A, ~B, ~α and ~β, be the ALSEs of A0, B0, α0 and β0, respectively. First we find ~α and ~β by maximising I(α,β), as defined in (4) with respect to α and β and once we obtain ~α and ~β, the ALSEs of the linear parameters A and B can be obtained as follows:

In the following two theorems, we state the consistency of the ALSE, ~θ.

Under the conditions of Theorem 1, the ALSEs ~A and ~B of the linear parameters A0 and B0 are strongly consistent estimators.

It has been observed in the following theorem that ALSEs have the same distribution as the LSEs asymptotically.

In this section, we consider a chirp signal model with multiple components. Mathematically, a multiple-component chirp model is given by:

To estimate the unknown parameters, we propose a sequential procedure to find the ALSEs. This method reduces the computational complexity of the estimators significantly without compromising on their efficiency. Following is the algorithm to find the ALSEs through sequential method: Step 1: Compute ~α1 and ~β1 by maximizing the periodogram-like function

Then the linear parameter estimates can be obtained by substituting ~α1 and ~β1 in (8). Thus

In the following theorems we prove that the ALSEs obtained by the sequential method described above are strongly consistent.

The result obtained in the above theorem can be extended upto the p-th step. Thus for any k ⩽ p, the ALSEs obtained at the k-th step are strongly consistent.

Lahiri et al., [2015] proved that the ordinary LSEs of the unknown parameters of the p-component chirp model have the following asymptotic distribution:

We have the following result regarding the asymptotic distribution of the ALSEs.

For the LSEs, we first minimize the error sum of squares function with respect to α and β using the Nelder and Mead method of optimization (using optim function in the R Stats Package). For the initial values, it is intuitive to minimize the function over the grid (πjn,πkn2), j=1,⋯,n; k=1,⋯,n2 analogous to what is suggested by Rice and Rosenblatt [1988] for the sinusoidal model. For the ALSEs, we maximize the periodogram-like function I(α,β), as defined in (4), again using the Nelder and Mead method and the starting values are obtained by maximizing I(α,β) on grid points as used for the corresponding LSEs.

Tables 1, 2 and 3 provide the results, averaged over 1000 simulation runs, we obtain for the one component model. In these tables, we observe that, the ALSEs have very small bias in the absolute value. The MSEs of the LSEs are very close to their asymptotic variances and the MSEs of the ALSEs also get very close to those of LSEs as n increases and hence to the theoretical asymptotic variances of the LSEs, showing that they are asymptotically equivalent. Also when we increase the sample size, the MSEs of both the estimators decrease showing that they are consistent. We observe that the estimators obtained by the Efficient Algorithm are close to the true values but the bias and the MSEs are not as small as compared with the other two estimators. However the time taken to compute the estimates by the Efficient Algorithm is much less than the time taken by the ALSEs and the LSEs.

This process of data generation and estimation of the unknown parameters is replicated 1000 times and we calculate the average values, bias and MSEs of these estimates. We also report the time taken for the entire simulation process by each of the estimation methods. We compute the asymptotic variance of the estimates to compare the MSEs with them. Simulation results provided in tables 4, 5 and 6, for the two component model, show that the MSEs of the proposed sequential estimators are well matched to the MSEs of LSEs and they become close as n increases. Also they are comparable to the asymptotic variance of the LSEs. In many cases, it is observed that the MSEs of the ALSEs of the first component, are smaller than the corresponding LSEs. In all the tables, it is consistently observed that compared to the LSEs, computation of the ALSEs takes lesser time.

It is observed that the estimates of the unknown non-linear parameters of the second component for the two component model, that is of α02, β02, have very small bias as compared to those obtained at the first stage, that is of α01, β01 or those obtained for the one component model, α0, β0. Since the proposed ALSEs have desirable properties, it is a good idea to obtain the initial estimates by maximising the periodogram-like function I(α,β) as defined in (4) and then carry out the least squares estimation.

We try to fit a multiple component chirp model to both the data sets, using the proposed sequential estimation procedure which computes ALSEs at each stage. At the same time, we compute the sequential LSEs as proposed by Lahiri et al., [2015] for comparison purposes. To find the initial values of the frequency and frequency rate, at each stage we maximize the periodogram-like function, I(α,β) over a fine grid: (πjn,πkn2), j = 1, 2, ⋯, n, k = 1, 2, ⋯, n2. For the estimation of the number of components, we use the following form of BIC:

11 - 14 provide the residual plots for the two data sets under the two sequential procedures.

In this paper, we proposed periodogram-type estimators, called the approximate least squares estimators (ALSEs), for the parameters of a one-dimensional one component chirp model and studied their asymptotic properties. We showed that they are consistent and asymptotically equivalent to the LSEs. Also we obtained the consistency of the ALSEs under weaker conditions than those required for the LSEs. For the multiple component chirp model, we proposed a sequential procedure based on calculating ALSEs and at each step of the sequential procedure establish that these are strongly consistent and asymptotically equivalent to the corresponding sequential LSEs, having the same rates of convergence. Simulation studies presented in the paper also confirm this large sample equivalence. Hence one may use the periodogram-like estimators as the initial values to find the LSEs. We also perform analysis of two speech signal data sets for illustrative purposes and the performances are quite satisfactory.

The authors would like to thank two unknown reviewers and the associate editor for their constructive comments which have helped to improve the manuscript significantly.

The following lemmas are required to prove Theorem 1.

Using multivariate Taylor series expansion of I′(~ξ) around ξ0, we get: