On APF Test for Poisson Process with Shift and Scale Parameters

We propose the goodness of fit test for inhomogeneous Poisson processes with unknown scale and shift parameters. A test statistic of Cramer-von Mises type is proposed and its asymptotic behavior is studied. We show that under null hypothesis the limit distribution of this statistic does not depend on unknown parameters. 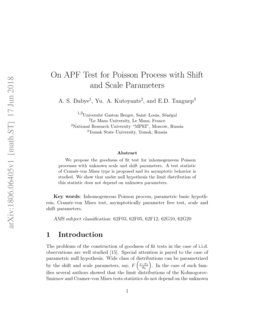 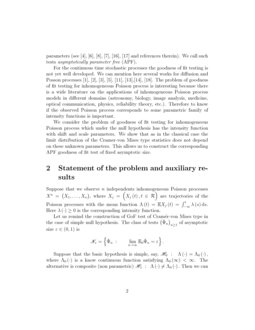 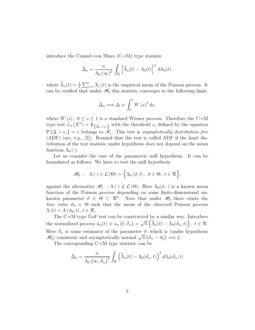 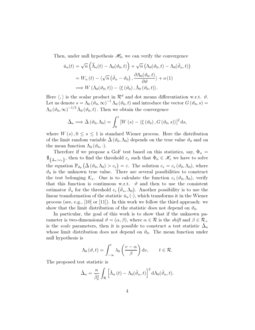 The problems of the construction of goodness of fit tests in the case of i.i.d. observations are well studied [15]. Special attention is payed to the case of parametric null hypothesis. Wide class of distributions can be parametrized by the shift and scale parameters, say, F(x−ϑ1ϑ2). In the case of such families several authors showed that the limit distributions of the Kolmogorov-Smirnov and Cramer-von Mises tests statistics do not depend on the unknown parameters (see [4], [6], [8], [7], [16], [17] and references therein). We call such tests asymptotically parameter free (APF).

For the continuous time stochastic processes the goodness of fit testing is not yet well developed. We can mention here several works for diffusion and Posson processes [1], [2], [3], [5], [11], [13],[14], [18]. The problem of goodness of fit testing for inhomogeneous Poisson process is interesting because there is a wide literature on the applications of inhomogeneous Poisson process models in different domains (astronomy, biology, image analysis, medicine, optical communication, physics, reliability theory, etc.). Therefore to know if the observed Poisson process corresponds to some parametric family of intensity functions is important.

We consider the problem of goodness of fit testing for inhomogeneous Poisson process which under the null hypothesis has the intensity function with shift and scale parameters. We show that as in the classical case the limit distribution of the Cramer-von Mises type statistics does not depend on these unknown parameters. This allows us to construct the corresponding APF goodness of fit test of fixed asymptotic size.

2 Statement of the problem and auxiliary results

Suppose that we observe n independents inhomogeneous Poisson processes Xn=(X1,…,Xn), where Xj=(Xj(t),t∈R) are trajectories of the Poisson processes with the mean function Λ(t)=EXj(t)=∫t−∞λ(s)ds. Here λ(⋅)≥0 is the corresponding intensity function.

Let us remind the construction of GoF test of Cramér-von Mises type in the case of simple null hypothesis. The class of tests (¯Ψn)n≥1 of asymptotic size ε∈(0,1) is

where ˆΛn(t)=1n∑nj=1Xj(t) is the empirical mean of the Poisson process. It can be verified that under H0 this statistic converges to the following limit:

where W(s),0≤s≤1 is a standard Wiener process. Therefore the C-vM type test ~ψn(Xn)=11{~Δn>cε} with the threshold cε defined by the equation P{Δ>cε}=ε belongs to Kε. This test is asymptotically distribution free (ADF) (see, e.g., [3]). Remind that the test is called ADF if the limit distribution of the test statistic under hypothesis does not depend on the mean function Λ0(⋅).

against the alternative H1 :Λ(⋅)∉L(Θ). Here Λ0(ϑ,⋅) is a known mean function of the Poisson process depending on some finite-dimensional unknown parameter ϑ∈Θ⊂Rd. Note that under H0 there exists the true value ϑ0∈Θ such that the mean of the observed Poisson process Λ(t)=Λ(ϑ0,t),t∈R.

The C-vM type GoF test can be constructed by a similar way. Introduce the normalized process ¯un(t)≡un(t,¯ϑn)=√n(ˆΛn(t)−Λ0(¯ϑn,t)),t∈R. Here ¯ϑn

is some estimator of the parameter

ϑ, which is (under hypothesis H0) consistent and asymptotically normal √n(¯ϑn−ϑ0)⟹ξ.

The corresponding C-vM type statistic can be

Then, under null hypothesis H0, we can verify the convergence

and introduce the vector

is standard Wiener process. Here the distribution of the limit random variable

Therefore if we propose a GoF test based on this statistics, say, Φn=1I{¯Δn>cε}, then to find the threshold cε such that Φn∈Kε we have to solve the equation Pϑ0(¯Δ(ϑ0,Λ0)>cε)=ε. The solution cε=cε(ϑ0,Λ0), where ϑ0 is the unknown true value. There are several possibilities to construct the test belonging Kε. One is to calculate the function cε(ϑ0,Λ0), verify that this function is continuous w.r.t. ϑ and then to use the consistent estimator ¯ϑn for the threshold cε(¯ϑn,Λ0)

. Another possibility is to use the linear transformation of the statistic

¯un(⋅), which transforms it in the Wiener process (see, e.g., [10] or [11]). In this work we follow the third approach: we show that the limit distribution of the statistic does not depend on ϑ0.

In particular, the goal of this work is to show that if the unknown parameter is two-dimensional ϑ=(α,β), where α∈R is the shift and β∈R+ is the scale parameters, then it is possible to construct a test statistic ^Δn whose limit distribution does not depend on ϑ0. The mean function under null hypothesis is

The proposed test statistic is

Here ^ϑn is the maximum likelihood estimator (MLE) of the vector parameter ϑ. We show that ^Δn⇒Δ, where Δ=Δ(Λ0), i.e., the distribution of the random variable Δ(Λ0) does not depend on ϑ0. Remind that the function Λ0(t),t∈R is known and therefore the solution cε=cε(Λ0) can be calculated before the experiment using, say, numerical simulations.

We are given n independent observations Xn=(X1,…,Xn) of inhomogeneous Poisson processes Xj=(Xj(t),t∈R) with the mean function Λ(t)=EXj(t),t∈R. We have to construct a GoF test in the hypothesis testing problem with parametric null hypothesis H0. More precizely, we suppose that under H0 the mean function Λ(t) is absolutely continuous: Λ′(t)=λ0(ϑ0,t). Here ϑ0 is the true value and the intensity function is λ0(ϑ0,t)=λ0(t−α0β0),ϑ0=(α0,β0)∈Θ⊂R2. The set Θ=(a1,a2)×(b1,b2) and b1>0, where all constants are finite. Therefore if we denote Λ0(t)=∫t−∞λ0(v)dv,t∈R, then the mean function under null hypothesis is

It is convenient to use two different functions Λ0(ϑ,t) and Λ0(t) and we hope that such notation will not be misleading.

Therefore, we have the parametric null hypothesis

where the parametric family is

We consider the class of tests of asymptotic level ε:

The test studied in this work is based on the following statistic of C-vM type:

where ^ϑn=(^αn,^βn) is the MLE. Remind that the log-likelihood ratio for this model of observations is

and the MLE ^ϑn is defined by the equation

Here ϑ1∈Θ is some fixed value.

As we use the asymptotic properties of the MLE ^ϑn, we need some regularity conditions, which we borrow from [12] (see the conditions B1-B5 in the Section 2.1 there).

Note that the derivative (vector) ∂λ(ϑ,t)∂ϑ of the intensity function is

Of course, we suppose that the expressions under the sign of integrals are integrable in the required sense.

For the consistency of the MLE we need the identifiability condition

Note that in the case of shift and scale parameters this condition is fulfilled. Indeed, suppose that for some ν>0 this integral is 0. Then there exists ϑ1≠ϑ0 (∥ϑ1−ϑ0∥≥ν) such that λ(ϑ1,t)≡λ(ϑ0,t). Recall that the functions are continuous. Therefore λ(t−α1β1)=λ(t−α0β0),t∈R or after the change of variables s=β−10(t−αo) we have

Of course, such function λ0(⋅)∉L1(R). Hence, the condition of identifiability is fulfilled.

Remind that by Cauchy-Schwartz inequality

The equality in Cauchy-Schwartz inequality (D=0) we obtain if and only if ∣∣sλ′0(s)∣∣≡∣∣λ′0(s)∣∣,s∈R. Of course such equality is impossible, if λ′(s)≠0 or s≠±1. As the function λ0(⋅) is positive and differentiable, we have

We suppose that the intensity function λ0(t),t∈R is strictly positive because if we have a set of positive Lebesgue measure, where λ0(t)=0 and the unknown parameters are shift and scale, then the measures induced by the observations will be not equivalent. The properties of the MLE will be different.

Under these conditions, the MLE is uniformly consistent, asymptotically normal √nβ0(^ϑn−ϑ0)⟹ζ∼N(0,I−1∗)

and the polynomial moments converge

For the proof see Theorem 2.4 in [12]. Note that the distribution of the vector ζ does not depend on ϑ0.

Let the conditions R be fulfilled then the test

belongs to the class Kε.

Proof. We can write

Here the vector ˙Λ0(ϑ,t)=∂∂ϑΛ0(ϑ,t) and we used the Taylor formula.

We have to show that under the null hypothesis

. We show that we have the convergence of finite dimensional distributions

where the constant C>0 does not depend on n.

we recall that by the central limit theorem

where mn→0 and the vector

By the central limit theorem

Recall that we have the representation

with the same Wiener process as in (16). Moreover, for the MLE we have the limit

Let us return to the proof of the asymptotic normality of the MLE. The random field Zn(v),v∈Vn we extend on the whole plane R2 continuously decreasing to zero outside of Vn. Denote (C0(R2),B) the measurable space of the continuous random surfaces tending to zero at infinity with the uniform metrics and Borelian σ-algebra. Introduce the measures Qn and Q induced by the realizations of Zn(⋅) and Z(⋅) in the space (C0(R2),B) respectively. Suppose that we already proved the weak convergence

Note that ψ(z)=supv∈Bz(v)−supv∉Bz(v) is a continuous functional on the space (C0(R2),B). The random function Z(⋅) takes its maximum at the point ^v=I(ϑ0)−1S(ϑ0). To prove the joint convergence in distribution of the vector Wk,n and ^vn=√nβ0(^ϑn−ϑ0) we denote Rn=(Wk,n,Zn(v),v∈R2) introduce the product space X=Rk×C0(R2) with the corresponding Borelian σ-algebra B∗. To verify the weak convergence Rn⇒R, where R=(Wk,Z(v),v∈R2) we a) prove the convergence of the finite-dimensional distributions

b) prove the tightness of the corresponding family of measures.

Hence we obtain the convergence of the finite-dimensional distributions (14). Let us check B. We have

For the second term we have

The inequality C follows from the similar estimates.