On an eigenvalue property of Summation-By-Parts operators

Summation-By-Parts (SBP) methods provide a systematic way of constructing provably stable numerical schemes. However, many proofs of convergence and accuracy rely on the assumption that the SBP operator possesses a particular eigenvalue property. In this note, three results pertaining to this property are proven. Firstly, the eigenvalue property does not hold for all nullspace consistent SBP operators. Secondly, this issue can be addressed without affecting the accuracy of the method by adding a specially designed, arbitrarily small perturbation term to the SBP operator. Thirdly, all pseudospectral methods satisfy the eigenvalue property. 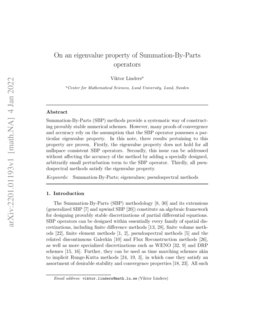 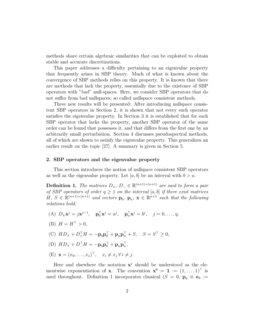 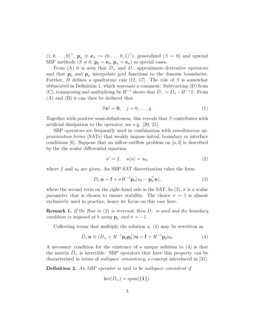 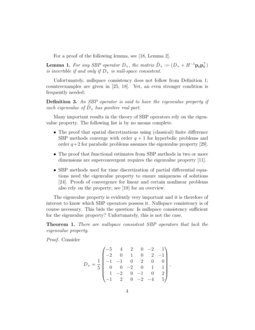 How well-conditioned can the eigenvalue problem be?

We consider a new algorithm in light of the min-max Collatz-Wielandt for...
Dong Li, et al. ∙

The purpose of this paper is to reveal an eigenvalue problem correspondi...
Kouta Sekine, et al. ∙

) constitute an algebraic framework for designing provably stable discretizations of partial differential equations. SBP operators can be designed within essentially every family of spatial discretizations, including finite difference methods

This paper addresses a difficulty pertaining to an eigenvalue property that frequently arises in SBP theory. Much of what is known about the convergence of SBP methods relies on this property. It is known that there are methods that lack the property, essentially due to the existence of SBP operators with ”bad” null-spaces. Here, we consider SBP operators that do not suffer from bad nullspaces; so called nullspace consistent methods.

Three new results will be presented: After introducing nullspace consistent SBP operators in Section 2, it is shown that not every such operator satisfies the eigenvalue property. In Section 3 it is established that for each SBP operator that lacks the property, another SBP operator of the same order can be found that possesses it, and that differs from the first one by an arbitrarily small perturbation. Section 4 discusses pseudospectral methods, all of which are shown to satisfy the eigenvalue property. This generalizes an earlier result on the topic ruggiu2018pseudo. A summary is given in Section 5.

2 SBP operators and the eigenvalue property

This section introduces the notion of nullspace consistent SBP operators as well as the eigenvalue property. Let [a,b] be an interval with b>a.

p0, pn, x∈Rn+1 such that the following relations hold:

From (A) it is seen that D+ and D− approximate derivative operators and that p0 and pninterpolate grid functions to the domain boundaries. Further, H defines a quadrature rule hicken2013summation; linders2018order. The role of S is somewhat obfuscated in Definition 1, which warrants a comment: Subtracting (D) from (C), transposing and multiplying by H−1 shows that D−=D+−H−1S. From (A) and (B) it can then be deduced that

Together with positive semi-definiteness, this reveals that S contributes with artificial dissipation to the operator; see e.g. mattsson2017diagonal; mattsson2004stable.

SBP operators are frequently used in combination with simultaneous approximation terms (SATs) that weakly impose initial, boundary or interface conditions carpenter1994time. Suppose that an inflow-outflow problem on [a,b] is described by the the scalar differential equation

where f and u0 are given. An SBP-SAT discretization takes the form

where the second term on the right-hand side is the SAT. In (3), σ is a scalar parameter that is chosen to ensure stability. The choice σ=1 is almost exclusively used in practice, hence we focus on this case here.

If the flow in (2) is reversed, then D− is used and the boundary condition is imposed at b using pn and σ=−1.

Collecting terms that multiply the solution u, (3) may be rewritten as

A necessary condition for the existence of a unique solution to (4) is that the matrix ~D+ is invertible. SBP operators that have this property can be characterized in terms of nullspace consistency, a concept introduced in svard2019convergence:

An SBP operator is said to be nullspace consistent if

For a proof of the following lemma, see (linders2020properties, Lemma 2).

Unfortunately, nullspace consistency does not follow from Definition 1; counterexamples are given in ranocha2019some; linders2020properties. Yet, an even stronger condition is frequently needed:

An SBP operator is said to have the eigenvalue property if each eigenvalue of ~D+ has positive real part.

Many important results in the theory of SBP operators rely on the eigenvalue property. The following list is by no means complete.

There are nullspace consistent SBP operators that lack the eigenvalue property.

and their corresponding eigenvectors are

The real parts of these eigenvalues are non-positive, hence the SBP operator does not have the eigenvalue property. ∎

In this section we consider an SBP operator D+ that is nullspace consistent but lack the eigenvalue property, i.e. it satisfies Definition 2 but not Definition 3. It will be shown that the eigenvalue property can be reclaimed by adding an appropriately designed perturbation S′ to D+. More precisely, the eigenvalue property is enforced by constructing a new operator D′+=D++12H−1S′, which adheres to Definition 1 so long as S′ is symmetric positive semi-definite and satisfies (1). In this case, S is replaced by S+S′ in Definition 1. The purpose of S′ is to push problematic eigenvalues into the right half-plane while leaving the remaining eigenvalues untouched. Furthermore, the matrix H and the vectors p0 and pn are left unperturbed. To achieve this, it is first necessary to establish certain properties of the problematic eigenvalues and eigenvectors.

The starting point is the following simple result. For a proof, see e.g. (linders2020properties, Lemma 1):

At this point, two lemmas will be established that are key to the construction of S′. Recall that an eigenvalue λ of ~D+ is normal if

Herein, the inner product of two vectors f and g are taken to be ⟨f,g⟩H=f∗Hg, where the superscript ∗ indicates conjugate transposition. Orthogonality should thus be understood with this inner product in mind. The norm ∥f∥H:=⟨f,f⟩12H will also be used.

Let (λ,w) be an eigenpair of ~D+ with Re(λ)=0. Then λ is a normal eigenvalue with respect to the inner product ⟨⋅,⋅⟩H.

In the final equality, ¯¯¯λ=−λ has been used, which holds since λ is imaginary. Consequently, (μ−λ)⟨w,v⟩H=0, however since μ≠λ by assumption, the sought orthogonality follows.

For (b), consider the following problem: Find a symmetric positive definite matrix X∈R(n+1)×(n+1) such that X~D++~D⊤+X≥0. From (5) it is seen that X=H solves this problem. However, the existence of a solution implies that all elementary divisors of imaginary eigenvalues of ~D+ are linear (carlson1963inertia, Corollary 2), which is equivalent to the stated assertion on the algebraic and geometric multiplicities (lancaster1985theory, Chapter 7). ∎

Since D+ is nullspace consistent by assumption, Lemma 1 ensures that λ≠0. It follows that ⟨1,w⟩H=0, hence the claim holds when j=0.

Next, suppose that the claim holds for some j−1<q. Then, similarly,

where the induction hypothesis implies the final equality. From nullspace consistency it follows that ⟨xj,w⟩H=0, and the claim holds by induction. ∎

Using Lemmas 3 and 4, the main result of this section can be proven:

each of these eigenvectors are orthogonal to any eigenvector corresponding to another eigenvalue. Since the algebraic and geometric multiplicities equal for each imaginary eigenvalue, their respective eigenspaces are complete. An orthogonal basis can be found for each space and these basis vectors can be taken as one of the listed eigenvectors. Thus, mutual orthogonality can be ensured among the eigenvectors

for each j=0,…,q. Here, Lemma 4 has been used in the final equality. Consequently, S′ satisfies (1) such that D′+ is an SBP operator of order q.

Consider an eigenvalue λ of ~D+. If Re(λ)≠0, then pick any eigenvector v corresponding to λ and note that by the orthogonality property in Lemma 3. Thus, the eigenpair (λ,v) is unaltered by S′ whenever Re(λ)≠0. However, if Re(λ)=0 so that λ=λi for some i, then pick the appropriate eigenvector v=wi and note that

where the second equality follows from the orthogonality of the eigenvectors w1,¯¯¯¯¯w1,…,wm,¯¯¯¯¯wm. Thus, ~D′+ has an eigenpair (λ′i,wi), where Re(λ′i)=ϵi2∥wi∥2H>0. By repeating this procedure for each λi and ¯¯¯λi, every eigenvalue of ~D′+ is accounted for. Consequently, the SBP operator D′+ has the eigenvalue property.

Finally, note that the eigenvectors wk and ¯¯¯¯¯wk may be normalized as desired and that the constants ϵk can be chosen arbitrarily small. Thus, for any norm it is possible to find S′ such that for any ε,

An important family of SBP operators consists of the pseudospectral methods. They all satisfy Definition 1 with order q=n; see carpenter1996spectral; fernandez2014generalized. These operators are also used in discontinuous Galerkin and flux reconstruction methods gassner2013skew; ranocha2016summation. Given x, the pseudospectral SBP operator D+ is uniquely defined. To see this, note that the accuracy conditions (A) in Definition 1 imply that the elements di,j in the ith row of D+ satisfy

Note that V is a Vandermonde matrix and that the numbers x0,…,xn are distinct. Thus, V⊤ is invertible and di,0,…,di,n are unique. The same of course holds for each row i=0,…,n, hence D+ is uniquely defined.

This argument does not imply uniqueness of H, p0, pn and S.

The goal of this section is to demonstrate that pseudospectral methods defined on arbitrary grids satisfy the eigenvalue property. In ruggiu2018pseudo it was shown that this is the case if H defines a quadrature rule that is exact for polynomials of degree 2n−1 or higher, i.e. if k1⊤Hxk=bk+1−ak+1 for k=0,…,2n−1. This holds in particular if the grid x is chosen to be the Legendre-Gauss, Legendre-Gauss-Radau or Legendre-Gauss-Lobatto nodes (mapped to the interval [a,b]) and H is a diagonal matrix containing the corresponding Gaussian quadrature weights. However, for general grids x, the resulting quadrature rule is exact only for polynomials of degree n−1 fernandez2014generalized. A different approach is thus necessary to generalize the result from ruggiu2018pseudo.

The starting point here is to show that pseudospectral methods on arbitrary grids are nullspace consistent.

The columns of the Vandermonde matrix V form a basis for Rn+1. Thus, if D+v=0 and v is expanded in terms of this basis as v=∑nk=0vkxk, then

By linear independence of the basis vectors it follows that vk=0 for k=1,…,n and consequently that v=v01. Thus, ker(D+)=span({1}) and D+ is consequently null-space consistent. ∎

With Lemma 5 in place, the results from Section 3 can be used to establish the eigenvalue property.

Every pseudospectral SBP operator has the eigenvalue property.

Suppose that there is a pseudospectral method D+ that does not have the eigenvalue property. Then, by Theorem 2, another operator D′+ of the same order of accuracy can be found that operates on the same grid and that is distinctly different from D+. However, this violates the uniqueness of pseudospectral methods.

Alternatively, suppose that there is a pseudospectral method D+ that does not have the eigenvalue property and denote by v one of the eigenvectors of ~D+ that corresponds to an imaginary eigenvalue. It follows from Lemma 4 that V⊤Hv=0. But both V and H are invertible, so v=0 and can therefore not be an eigenvector, which contradicts its definition. ∎

Three results on the eigenvalues of SBP operators have been proven. Firstly, the eigenvalue property, which is essential in many important accuracy and convergence proofs, does not hold for all nullspace consistent SBP operators. Secondly, this problem can be addressed by carefully constructing an arbitrarily small artificial dissipation term that pushes each problematic eigenvalue into the right half-plane without affecting the other eigenvalues or the order of accuracy of the method. Thirdly, all pseudospectral methods satisfy the eigenvalue property. Thus, SBP operators used within the discontinuous Galerkin and flux reconstruction frameworks are free from the nuisance of problematic eigenvalues.