On Adversarial Removal of Hypothesis-only Bias in Natural Language Inference 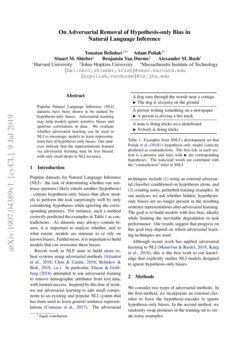 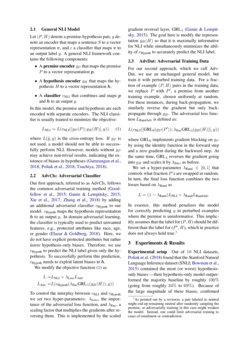 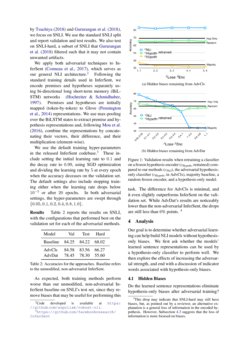 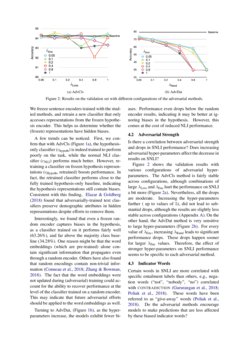 There is Strength in Numbers: Avoiding the Hypothesis-Only Bias in Natural Language Inference via Ensemble Adversarial Training

Learning from others' mistakes: Avoiding dataset biases without modeling them

The IMP game: Learnability, approximability and adversarial learning beyond Σ^0_1

Popular datasets for Natural Language Inference (NLI) - the task of determining whether one sentence (premise) likely entails another (hypothesis) - contain hypothesis-only biases that allow models to perform the task surprisingly well by only considering hypotheses while ignoring the corresponding premises. For instance, such a method correctly predicted the examples in Table 1 as contradictions. As datasets may always contain biases, it is important to analyze whether, and to what extent, models are immune to or rely on known biases. Furthermore, it is important to build models that can overcome these biases.

. The adversarial techniques include (1) using an external adversarial classifier conditioned on hypotheses alone, and (2) creating noisy, perturbed training examples. In our analyses we ask whether hidden, hypothesis-only biases are no longer present in the resulting sentence representations after adversarial learning. The goal is to build models with less bias, ideally while limiting the inevitable degradation in task performance. Our results suggest that progress on this goal may depend on which adversarial learning techniques are used.

Although recent work has applied adversarial learning to NLI Minervini & Riedel (2018); Kang et al. (2018), this is the first work to our knowledge that explicitly studies NLI models designed to ignore hypothesis-only biases.

We consider two types of adversarial methods. In the first method, we incorporate an external classifier to force the hypothesis-encoder to ignore hypothesis-only biases. In the second method, we randomly swap premises in the training set to create noisy examples.

to a vector representation

v, and c a classifier that maps v to an output label y. A general NLI framework contains the following components:

In this model, the premise and hypothesis are each encoded with separate encoders. The NLI classifier is usually trained to minimize the objective:

where L(~y,y) is the cross-entropy loss. If gP is not used, a model should not be able to successfully perform NLI. However, models without gP may achieve non-trivial results, indicating the existence of biases in hypotheses (Gururangan et al., 2018; Poliak et al., 2018; Tsuchiya, 2018).

Our first approach, referred to as AdvCls, follows the common adversarial training method (Goodfellow et al., 2015; Ganin & Lempitsky, 2015; Xie et al., 2017; Zhang et al., 2018) by adding an additional adversarial classifier cHypoth to our model. cHypoth maps the hypothesis representation h to an output y. In domain adversarial learning, the classifier is typically used to predict unwanted features, e.g., protected attributes like race, age, or gender Elazar & Goldberg (2018). Here, we do not have explicit protected attributes but rather latent hypothesis-only biases. Therefore, we use cHypoth to predict the NLI label given only the hypothesis. To successfully perform this prediction, cHypoth needs to exploit latent biases in h.

We modify the objective function (1) as

, the importance of the adversarial loss function, and

λEnc, a scaling factor that multiplies the gradients after reversing them. This is implemented by the scaled gradient reversal layer, GRLλ Ganin & Lempitsky (2015). The goal here is modify the representation gH(H) so that it is maximally informative for NLI while simultaneously minimizes the ability of cHypoth to accurately predict the NLI label.

For our second approach, which we call AdvDat, we use an unchanged general model, but train it with perturbed training data. For a fraction of example (P,H) pairs in the training data, we replace P with P′, a premise from another training example, chosen uniformly at random. For these instances, during back-propagation, we similarly reverse the gradient but only back-propagate through gH. The adversarial loss function LRandAdv is defined as:

where GRL0 implements gradient blocking on gP by using the identity function in the forward step and a zero gradient during the backward step. At the same time, GRLλ reverses the gradient going into gH and scales it by λEnc, as before.

We set a hyper-parameter λRand∈[0,1] that controls what fraction P’s are swapped at random. In turn, the final loss function combines the two losses based on λRand as

In essence, this method penalizes the model for correctly predicting y in perturbed examples where the premise is uninformative. This implicitly assumes that the label for (P,H) should be different than the label for (P′,H), which in practice does not always hold true.111As pointed out by a reviewer, a pair labeled as neutral might end up remaining neutral after randomly sampling the premise, so adversarially training in this case might weaken the model. Instead, one could limit adversarial training to cases of entailment or contradiction.

Out of 10 NLI datasets, Poliak et al. (2018) found that the Stanford Natural Language Inference dataset (SNLI; Bowman et al., 2015) contained the most (or worst) hypothesis-only biases —their hypothesis-only model outperformed the majority baseline by roughly 100% (going from roughly 34% to 69%). Because of the large magnitude of these biases, confirmed by Tsuchiya (2018) and Gururangan et al. (2018), we focus on SNLI. We use the standard SNLI split and report validation and test results. We also test on SNLI-hard, a subset of SNLI that Gururangan et al. (2018) filtered such that it may not contain unwanted artifacts.

We apply both adversarial techniques to InferSent Conneau et al. (2017), which serves as our general NLI architecture.222Code developed is available at https://github.com/azpoliak/robust-nli.

Mou et al. (2016), combine the representations by concatenating their vectors, their difference, and their multiplication (element-wise).

We use the default training hyper-parameters in the released InferSent codebase.333https://github.com/facebookresearch/InferSent These include setting the initial learning rate to 0.1 and the decay rate to 0.99, using SGD optimization and dividing the learning rate by 5

at every epoch when the accuracy deceases on the validation set. The default settings also include stopping training either when the learning rate drops below

Table 2 reports the results on SNLI, with the configurations that performed best on the validation set for each of the adversarial methods.

As expected, both training methods perform worse than our unmodified, non-adversarial InferSent baseline on SNLI’s test set, since they remove biases that may be useful for performing this task. The difference for AdvCls is minimal, and it even slightly outperforms InferSent on the validation set. While AdvDat’s results are noticeably lower than the non-adversarial InferSent, the drops are still less than 6% points. 444This drop may indicate that SNLI-hard may still have biases, but, as pointed out by a reviewer, an alternative explanation is a general loss of information in the encoded hypothesis. However, Subsection 4.3 suggests that the loss of information is more focused on biases.

Do the learned sentence representations eliminate hypothesis-only biases after adversarial training? We freeze sentence encoders trained with the studied methods, and retrain a new classifier that only accesses representations from the frozen hypothesis encoder. This helps us determine whether the (frozen) representations have hidden biases.

A few trends can be noticed. First, we confirm that with AdvCls (Figure 0(a)), the hypothesis-only classifier (chypoth) is indeed trained to perform poorly on the task, while the normal NLI classifier (cNLI) performs much better. However, retraining a classifier on frozen hypothesis representations (cHypoth, retrained) boosts performance. In fact, the retrained classifier performs close to the fully trained hypothesis-only baseline, indicating the hypothesis representations still contain biases. Consistent with this finding,  Elazar & Goldberg (2018)

found that adversarially-trained text classifiers preserve demographic attributes in hidden representations despite efforts to remove them.

Interestingly, we found that even a frozen random encoder captures biases in the hypothesis, as a classifier trained on it performs fairly well (63.26%), and far above the majority class baseline (34.28%). One reason might be that the word embeddings (which are pre-trained) alone contain significant information that propagates even through a random encoder. Others have also found that random encodings contain non-trivial information (Conneau et al., 2018; Zhang & Bowman, 2018). The fact that the word embeddings were not updated during (adversarial) training could account for the ability to recover performance at the level of the classifier trained on a random encoder. This may indicate that future adversarial efforts should be applied to the word embeddings as well.

Turning to AdvDat, (Figure 0(b)), as the hyper-parameters increase, the models exhibit fewer biases. Performance even drops below the random encoder results, indicating it may be better at ignoring biases in the hypothesis. However, this comes at the cost of reduced NLI performance.

Is there a correlation between adversarial strength and drops in SNLI performance? Does increasing adversarial hyper-parameters affect the decrease in results on SNLI?

Certain words in SNLI are more correlated with specific entailment labels than others, e.g., negation words (“not”, “nobody”, “no”) correlated with contradiction (Gururangan et al., 2018; Poliak et al., 2018). These words have been referred to as “give-away” words Poliak et al. (2018). Do the adversarial methods encourage models to make predictions that are less affected by these biased indicator words?

label, we computed the probability that a model predicts an example as a contradiction, given that the hypothesis contains the word. Table

3 shows the top 10 examples in the training set. For each word w, we give its frequency in SNLI, its empirical correlation with the label and with InferSent’s prediction, and the percentage decrease in correlations with contradiction predictions by three configurations of our methods. Generally, the baseline correlations are more uniform than the empirical ones (p̂(l|w)), suggesting that indicator words in SNLI might not greatly affect a NLI model, a possibility that both Poliak et al. (2018) and Gururangan et al. (2018) do concede. For example, Gururangan et al. (2018) explicitly mention that “it is important to note that even the most discriminative words are not very frequent.”

However, we still observed small skews towards

contradiction. Thus, we investigate whether our methods reduce the probability of predicting contradiction when a hypothesis contains an indicator word. The model trained with AdvDat (where λRand=0.4, λEnc=1) predicts contradiction much less frequently than InferSent on examples with these words. This configuration was the strongest AdvDat model that still performed reasonably well on SNLI (Figure 1(b)). Here, AdvDat appears to remove some of the biases learned by the baseline, unmodified InferSent. We also provide two other configurations that do not show such an effect, illustrating that this behavior highly depends on the hyper-parameters.

We employed two adversarial learning techniques to a general NLI model by adding an external adversarial hypothesis-only classifier and perturbing training examples. Our experiments and analyses suggest that these techniques may help models exhibit fewer hypothesis-only biases. We hope this work will encourage the development and analysis of models that include components that ignore hypothesis-only biases, as well as similar biases discovered in other natural language understanding tasks Schwartz et al. (2017), including visual question answering, where recent work has considered similar adversarial techniques for removing language biases Ramakrishnan et al. (2018); Grand & Belinkov (2019).

This work was supported by JHU-HLTCOE, DARPA LORELEI, the Harvard Mind, Brain, and Behavior Initiative, and NSF 1845664. We thank the anonymous reviewers for their comments. Views and conclusions contained in this publication are those of the authors and should not be interpreted as representing official policies or endorsements of DARPA or the U.S. Government.

Appendix A Stronger hyper-parameters for AdvCls

Figure 3 provides validation results using AdvCls with stronger hyper-parameters to complement the discussion in §4.2. While it is difficult to notice trends, all configurations perform similarly and slightly below the baseline. These models seem to be less stable compared to using smaller hyper-parameters, as discussed in §4.2.