In this paper we derive 7^th order convergent integration formula in time which is weakly L-stable. To derive the method we use, Newton Cotes formula, fifth-order Hermite interpolation polynomial approximation (osculatory interpolation) and sixth-order explicit backward Taylor's polynomial approximation. The vector form of this formula is used to solve Burger's equation which is one dimensional form of Navier-Stokes equation. We observe that the method gives high accuracy results in the case of inconsistencies as well as for small values of viscosity, e.g., 10^-3. Computations are performed by using Mathematica 11.3. Stability and convergence of the schemes are also proved. To check the efficiency of the method we considered 6 test examples and several tables and figures are generated which verify all results of the paper. 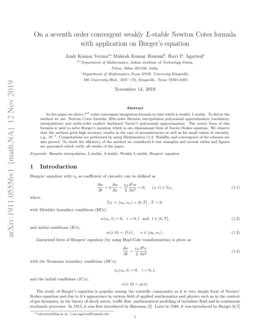 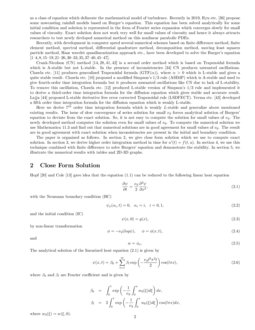 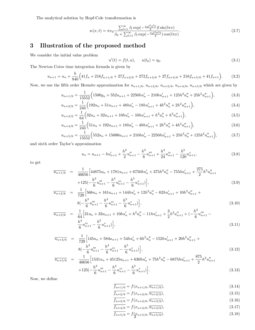 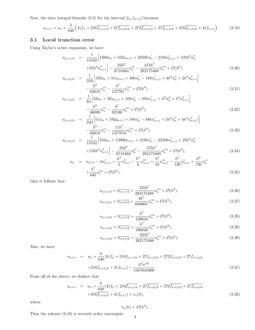 The Key Equation for One-Point Codes

Based on the equivalence of A-stability and G-stability, the energy tech...
Minghua Chen, et al. ∙

It has by now become a standard approach to use the theory of sparse (or...
Ioannis Emiris, et al. ∙

The Challenge of Sixfold Integrals: The Closed-Form Evaluation of Newton Potentials between Two Cubes

with the Neumann boundary conditions (BCs),

and the initial conditions (ICs),

The study of Burger’s equation is popular among the scientific community as it is very simple form of Naviers’ Stokes equation and due to it’s appearence in various field of applied mathematics and physics such as in the context of gas dynamics, in the theory of shock waves, traffic flow, mathematical modeling of turbulent fluid and in continuous stochastic processes. In 1915, it was first introduced by Bateman [5]. Later in 1948, it was introduced by Burger [6, 7] as a class of equation which delineate the mathematical model of turbulence. Recently in 2019, Ryu etc. [36] propose some nowcasting rainfall models based on Burger’s equation. This equation has been solved analytically for some initial condition and solution is represented in the form of Fourier series expansion which converges slowly for small values of viscosity. Exact solution does not work very well for small values of viscosity and hence it always attracts researchers to test newly devloped numerical method on this nonlinear parabolic PDEs.

Crank-Nicolson (CN) method [14, 41, 42, 28] is a second order method which is based on Trapezoidal formula which is A-stable but not L-stable. In the presence of inconsistencies [34] CN produces unwanted oscillations. Chawla etc. [11] produces generalised Trapezoidal formula (GTF(α)), where α>0 which is L-stable and gives a quite stable result. Chawla etc. [10] proposed a modified Simpson’s 1/3 rule (ASIMP) which is A-stable and used to give fourth-order time integration formula but it produces unwanted oscillations like CN due to lack of L-stability. To remove this oscillation, Chawla etc. [12] produced L-stable version of Simpson’s 1/3 rule and implemented it to derive a third-order time integration formula for the diffusion equation which gives stable and accurate result. Lajja [44] proposed L-stable derivative free error corrected Trapezoidal rule (LSDFECT). Verma etc. [43] developed a fifth order time integration formula for the diffusion equation which is weakly L-stable.

The paper is organized as follows. In section 2, we give close form solution which we use to compute exact solution. In section 3, we derive higher order integration method in time for u′(t)=f(t,u). In section 4, we use this technique combined with finite difference to solve Burgers’ equation and demonstrate the stability. In section 5, we illustrate the numerical results with tables and 2D-3D graphs.

Hopf [20] and Cole [13] gave idea that the equation (1.1) can be reduced to the following linear heat equation

with the Neumann boundary condition (BC)

and the initial condition (IC)

The analytical solution of the linearized heat equation (2.1) is given by

where β0 and βl are Fourier coefficient and is given by

The analytical solution by Hopf-Cole transformation is

3 Illustration of the proposed method

We consider the initial value problem

The Newton Cotes time integration formula is given by

Now, the time integral formula (3.2) for the interval [tn,tn+1] becomes

Using Taylor’s series expansion, we have

then it follows that

From all of the above, we deduce that

and assume s=hλ, then we have

From figure 1 it can be seen that Ψ(s)≮1 and hence our scheme is not A-stable. Since Ψ(s)→0 as s→∞ and hence scheme is weakly L-stable.

4 Solution of the Burgers’ equation

Also partition the interval [0,T] in to M equal subintervals with the temporal grid tj=jτ,j=0,1,2,...,M where τ=T/M and M is a positive integer.

and convert the linearized Burgers’ equation into an initial value problem in vector form.

Now, we apply finite difference discretization on (2.1) with the Neumann boundary conditions

we get the following equation

This method is O(h4)+O(τ7). BY using (4.3) we can compute Ψj+1 and hence wij is computed at different xi’s for a given time level tj. Physical properties of the solutions are discussed later in form of figures and tables.

4.2 Unconditional stability of the scheme for the heat equation

The matrix P is similar to a symmetric matrix.

Let us introduce a diagonal matrix