On a bivariate Birnbaum-Saunders distribution parameterized by its means: features, reliability analysis and application

Birnbaum-Saunders models have been widely used to model positively skewed data. In this paper, we introduce a bivariate Birnbaum-Saunders distribution which has the means as parameters. We present some properties of the univariate and bivariate Birnbaum-Saunders models. We discuss the maximum likelihood and modified moment estimation of the model parameters and associated inference. A simulation study is conducted to evaluate the performance of the maximum likelihood and modified moment estimators. The probability coverages of confidence intervals are also discussed. Finally, a real-world data analysis is carried out for illustrating the proposed model. 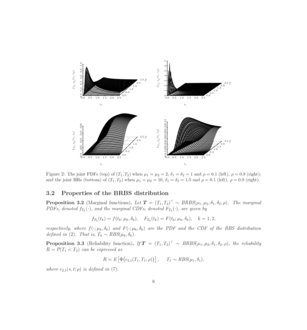 On a bimodal Birnbaum-Saunders distribution with applications to lifetime data

The Birnbaum-Saunders distribution is a flexible and useful model which ...
Roberto Vila, et al. ∙

In medical studies, it is common the presence of a fraction of patients ...
Marcos Vinicius de Oliveira Peres, et al. ∙

A Novel Bivariate Generalized Weibull Distribution with Properties and Applications

The Birnbaum-Saunders (BS) distribution was proposed by Birnbaum and Saunders (1969) motivated by problems of vibration in commercial aircrafts that caused fatigue in materials. Although, in principle, its origin is for modeling equipment lifetimes subjected to dynamic loads, the BS distribution has been widely studied and applied in many applied fields including, for example, engineering, business, economics, medicine, atmospheric contaminants, finance and quality control; see Jin and Kawczak (2003), Balakrishnan et al. (2007), Bhatti (2010), Villegas et al. (2011), Paula et al. (2012), Saulo et al. (2013), Marchant et al. (2013), Leiva et al. (2014), Leão et al. (2017a, b), and references therein. The interested reader on the BS distribution is refereed to Johnson et al. (1995); Leiva (2016)

. These works present a full review about this model. The BS distribution has been used quite effectively to model positively skewed data, especially lifetime data and crack growth data. This distribution is related to the normal distribution and has interesting properties.

is used when an random variable (RV) follows a reparameterized BS (RBS) distribution; more details about this model is found in Section

(Kocherlakota, 1986) and its reciprocals. They also introduced a mixture of two bivariate BS distributions and discussed its various properties. Kundu et al. (2013) extended to the multivariate case the generalized BS distribution introduced by Díaz-García and Leiva (2005). Other bivariate and multivariate distributions related to the BS model can be found in Vilca et al. (2014a, b), Kundu (2015b, a) and Jamalizadeh and Kundu (2015).

In this context, the primary objective of this paper is to introduce a bivariate RBS (BRBS) distribution based on the RBS distribution proposed by Santos-Neto et al. (2012). The secondary objectives are: (i) to present the reliability measure for the BRBS model and obtain the monotonicity of the hazard rate (HR); (ii) to discuss some unimodality properties of the BRBS model; (iii) to derive the ML estimators and MM estimators of the unknown parameters as well as their asymptotic properties; (iv) to evaluate the performance of the ML and MM estimators via Monte Carlo (MC) simulations; and (v) to illustrate the potential applications by using real data.

The rest of the paper proceeds as follows. In Section 2, we describe briefly the BS and RBS distributions and their related properties. In Section 3, we introduce the BRBS distribution and discuss some of its properties. In Section 4, we present the ML and MM estimators of the unknown parameters and their corresponding asymptotic results. In Section 5, an evaluation of the ML and MM estimators using MC simulation is shown, as well as an illustrative example by using a real data set. Finally, in Section 5.2, we provide some concluding remarks and also point out some problems worthy of further study.

where α>0 and β>0 are shape and scale parameters, respectively, Z is a RV following a standard normal distribution Z∼N(0,1), such that T is BS distributed with notation T∼BS(α,β)

. The probability density function (PDF) of

T is given by

The mean and variance of

T are given by E[T]=β[1+α2/2] and Var[T]=(αβ)2(1+5α2/4), respectively. The scale parameter β is also the median of the distribution. The BS distribution holds the reciprocal property, that is, 1/T has the same distribution of T with the parameter β replaced by 1/β, 1/T∼BS(α,1/β), which implies

The RBS distribution is indexed by the parameters μ=β(1+α2/2) and δ=2/α2, where α and β are the original BS parameters of (1), and μ,δ>0 are the scale and shape (precision) parameters, respectively. If T∼RBS(μ,δ), then its PDF, for t>0, is given by

and its cumulative distribution function (CDF) is denoted by

respectively, where Φ(⋅) is the CDF of the standard normal distribution. Figure 1 displays some shapes for the PDF and HR of T∼RBS(1,δ).

where ϕ2(u,v;ρ) is a normal joint PDF given by

From now on, we will use the following notation

Some important properties of the function cj,k(t,w;ρ) are:

The joint PDFs and HRs of (T1,T2) are unimodal and the surface plots for some values of the parameters are presented in Figure 2.

3.2 Properties of the BRBS distribution

If T1 and T2 are identically distributed RVs following a RBS distribution, then

Some authors like Basu (1971) or Puri and Rubin (1974) define the multivariate HR as a scalar quantity. In the bivariate case, Basu gives the HR as

is the bivariate SF. An analogous procedure to Proposition 3.4 shows that

The function is decreasing in both t1 and t2.

For the BRBS distribution,

Let X and Y be RVs, the covariance and correlation of X and Y, as usual, are denoted by Cov(X,Y) and ρ(X,Y) respectively. The following result tells us that two RVs with BRBS distribution are associated and correlated positively.

Let (X,Y) be a bivariate positive RV with bivariate SF S(x,y) (defined in (8)) and with E[XY] finite. If we assume that the sampling probability of (X,Y) is proportional to XY, the recurrence times are (Xeq,Yeq), where Xeq=XsbU1 and Yeq=YsbU2, where U1 and U2

have independent uniform distributions in

(0,1) and are independent of (Xsb,Ysb). The vector (Xsb,Ysb) is known as the size biased random vector and has PDF defined by

Under the previous hypothesis, the joint PDF of the bivariate equilibrium distribution (Xeq,Yeq) is given by (see Navarro et al. (2006) or Navarro and Sarabia (2010))

According to (10), the equilibrium PDF associated with (2) is

For the BRBS distribution, the function feq(t1,t2) is decreasing in both t1 and t2.

3.3 Failure rate with presence of dependence

A real function K(x,y), which is defined on X and Y, X and Y are linearly ordered sets, is said to be totally positive of order two (TP2) and reverse rule of order two (RR2) in x∈X and y∈Y if

The LDF, γK(x,y), can be defined for any positive and mixed differentiable function K(x,y), which does not need to be a density function. See Holland and Wang (1987) for definition and properties of the local dependence function.

It can be verified that

whenever ρ>0 (<0). Then, by Theorem 3.4 the joint PDF fT1,T2(t1,t2) is an example of a function TP2 (RR2) when ρ>0 (<0). The LDF will be used for studying the monotonicity of certain HRs. If (X,Y)⊤ is a bivariate random vector distributed according to F(x,y), then one can consider F(x|Y∈A) (the CDF of X given that Y∈A). The conditional HR (CHR) of X given Y∈A and mean residual function (MRF), using obvious notation, are defined by