On 120-avoiding inversion and ascent sequences

Recently, Yan and the first named author investigated systematically the enumeration of inversion or ascent sequences avoiding vincular patterns of length 3, where two of the three letters are required to be adjacent. They established many connections with familiar combinatorial families and proposed several interesting conjectures. The objective of this paper is to address two of their conjectures concerning the enumeration of 120-avoiding inversion or ascent sequences. 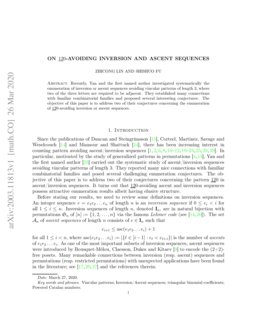 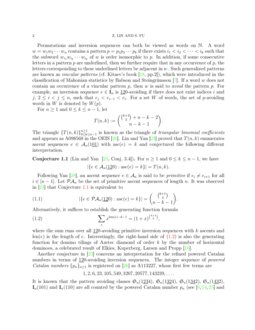 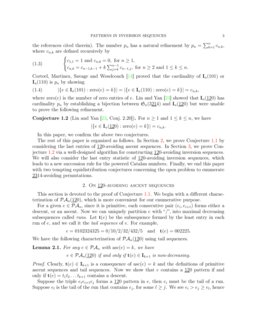 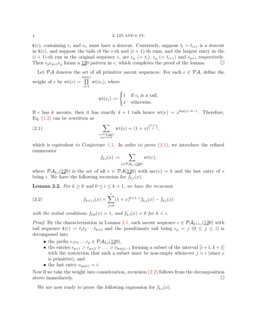 Since the publications of Duncan and Steingrímsson [15], Corteel, Martinez, Savage and Weselcouch [14] and Mansour and Shattuck [24], there has been increasing interest in counting pattern avoiding ascent/inversion sequences [1, 2, 6, 8, 10, 11, 12, 20, 19, 21, 22, 23, 25, 28, 29]. In particular, motivated by the study of generalized patterns in permutations [4, 13], Yan and the first named author [23] carried out the systematic study of ascent/inversion sequences avoiding vincular patterns of length 3. They reported many nice connections with familiar combinatorial families and posed several challenging enumeration conjectures. The objective of this paper is to address two of their conjectures concerning the pattern 12–––0 in ascent/inversion sequences. It turns out that 12–––0-avoiding ascent and inversion sequences possess attractive enumeration results albeit having elusive structure.

for all 1≤i<n, where asc(e1e2…ei):=|{ℓ∈[i−1]:eℓ<eℓ+1}| is the number of ascents of e1e2…ei. As one of the most important subsets of inversion sequences, ascent sequences were introduced by Bousquet-Mélou, Claesson, Dukes and Kitaev [9] to encode the (2+2)-free posets. Many remarkable connections between inversion (resp. ascent) sequences and permutations (resp. restricted permutations) with unexpected applications have been found in the literature; see [27, 20, 17] and the references therein.

Permutations and inversion sequences can both be viewed as words on N. A word w=w1w2⋯wn contains a pattern p=p1p2⋯pk if there exists i1<i2<⋯<ik such that the subword wi1wi2⋯wik of w is order isomorphic to p. In addition, if some consecutive letters in a pattern p are underlined, then we further require that in any occurrence of p, the letters corresponding to these underlined letters be adjacent in w. Such generalized patterns are known as vincular patterns (cf. Kitaev’s book [18, pp.2]), which were introduced in the classification of Mahonian statistics by Babson and Steingrímsson [7]. If a word w does not contain an occurrence of a vincular pattern p, then w is said to avoid the pattern p. For example, an inversion sequence e∈In is 12–––0-avoiding if there does not exist indices i and j, 2≤i<j≤n, such that ej<ei−1<ei. For a set W of words, the set of p-avoiding words in W is denoted by W(p).

The triangle {T(n,k)}n≥10≤k≤n−1 is known as the triangle of triangular binomial coefficients and appears as A098568 in the OEIS [26]. Lin and Yan [23] proved that T(n,k) enumerates ascent sequences e∈An(101–––) with asc(e)=k and conjectured the following different interpretation.

Following Yan [28], an ascent sequence e∈An is said to be primitive if ei≠ei+1 for all i∈[n−1]. Let PAn be the set of primitive ascent sequences of length n. It was observed in [23] that Conjecture 1.1 is equivalent to

Alternatively, it suffices to establish the generating function formula

where the sum runs over all 12–––0-avoiding primitive inversion sequences with k ascents and len(e) is the length of e. Interestingly, the right-hand side of (1.2) is also the generating function for domino tilings of Azetec diamond of order k by the number of horizontal dominoes, a celebrated result of Elkies, Kuperberg, Larsen and Propp [16].

Corteel, Martinez, Savage and Weselcouch [14] proved that the cardinality of In(101) or In(110) is pn by showing

In this paper, we confirm the above two conjectures.

The rest of this paper is organized as follows. In Section 2, we prove Conjecture 1.1 by considering the last entries of 12–––0-avoiding ascent sequences. In Section 3, we prove Conjecture 1.2 via a well-designed algorithm for constructing 12–––0-avoiding inversion sequences. We will also consider the last entry statistic of 12–––0-avoiding inversion sequences, which leads to a new succession rule for the powered Catalan numbers. Finally, we end this paper with two tempting equidistribution conjectures concerning the open problem to enumerate 23–––14-avoiding permutations.

This section is devoted to the proof of Conjecture 1.1. We begin with a different characterization of PAn(12–––0), which is more convenient for our enumerative purpose.

For a given e∈PAn, since it is primitive, each consecutive pair (ei,ei+1) forms either a descent, or an ascent. Now we can uniquely partition e with “/”, into maximal decreasing subsequences called runs. Let t(e) be the subsequence formed by the least entry in each run of e, and we call it the tail sequence of e. For example,

We have the following characterization of PAn(12–––0) using tail sequences.

Clearly, t(e)∈Ik+1 is a consequence of asc(e)=k and the definitions of primitive ascent sequences and tail sequences. Now we show that e contains a 12–––0 pattern if and only if t(e)=t1t2…tk+1 contains a descent.

Let PA denotes the set of all primitive ascent sequences. For each e∈PA, define the weight of e by wt(e)=len(e)∏i=1wt(ei), where

which is equivalent to Conjecture 1.1. In order to prove (2.1), we introduce the refined enumerator

Now if we take the weight into consideration, recursion (2.2) follows from the decomposition above immediately. ∎

We are now ready to prove the following expression for fk,i(x).

Conjecture 1.1 is an immediate consequence of Theorem 2.3.

We are going to prove Theorem 2.3 by induction based on recursion (2.2).

We will prove the result by induction on k. The first few values

Thus, we have verified the case with k=m+1 for (2.3). The proof is now completed by induction. ∎

In this subsection, we develop a delicate algorithm to construct recursively 12–––0-avoiding inversion sequences, which leads to a proof of Conjecture 1.2.

Quite recently, Beaton, Bouvel, Guerrini and Rinaldi [8, Prop. 19] rephrased (1.3) in terms of the following succession rule, and reproved the statement of Corteel et al. for In(110) by explaining their growth subjected to this rule.

Here (i)i means i copies of (i). The powered Catalan generating tree (actually an infinite rooted tree) can be constructed from ΩpCat like this: the root is (1) and the children of a vertex labelled (k) are those generated according to the rule ΩpCat. Note that the number of vertices at level n that carry the label (k) in the powered Catalan generating tree is precisely the quantity cn,k.

Our strategy to prove Conjecture 1.2 is to show that the family {In(12–––0)}n≥1 also obeys the succession rule ΩpCat. We remark that the first step is the same as given in [8], while the second step involving “Algorithm BS” is substantially different and crucial in dealing with 12–––0-avoiding, rather than 110-avoiding inversion sequences.

Transform e′ into one or more 12–––0-avoiding inversion sequences, according to the following three succession cases.

If m=j or Um=∅, output e as is. Note that in this case e contains at most one 1 between the 0s.

Otherwise, initiate R=Um and we go through the following steps to locally transform certain substring of e.

where all the involved substrings R are colored in red.

To complete the proof, we have to show that if we apply the above process for each sequence in In(12–––0), we generate every sequence in In+1(12–––0) precisely once. The first thing to notice is that e(k+1) contains no 1s, e(1) has only one 0, and e(m) has at least two 0s and at least one 1. So these three cases are mutually exclusive. It should be clear how to invert e(k+1) or e(1) to recover e, so it suffices to invert e(j,m). This is done by first applying the forward shift algorithm below to e(j,m), which outputs the sequence e′′; then obtaining e′ from e′′ by replacing all 1s by 0s; and finally deriving e from σ−1(e′)=0⋅e.

Input sequence e, which has at least two 0s and at least one 1. We call the substring inbetween the leftmost 0 and the rightmost 0 the zero zone of e.

If e has less than two 1s in the zero zone, output e as is.

Otherwise we can write

where the substrings V1,…,Vj,Vj+1,…,Vl−1 are zero-free and non-increasing, Vl is zero-free and 12–––0-avoiding, and Vi1 (resp. Vj1) contains the leftmost (resp. rightmost) 1 in the zero zone. Now initiate L=Vi1 and we go through the following steps to locally transform certain substring of e.

In conclusion, we have proved that 12–––0-avoiding inversion sequences grow according to the rule ΩpCat if every sequence with k zeros is represented by (k). This completes the proof of the conjecture. ∎

The tripe (last,zero,rmin) has the same distribution over In(12–––0) and In(110), where rmin(e) is the number of right-to-left minima of an inversion sequence e.

The encoding Θ, known as invcode of permutations, is a variation of the famous Lehmer code. One interesting feature of Θ that the b-code does not possess is last(π)=last(Θ(π)), where last(π):=n−πn.

In [8, Prop. 25], Beaton, Bouvel, Guerrini and Rinaldi obtained another succession rule for the powered Catalan numbers, which is essentially different from ΩpCat:

The consideration of the last entry statistic on 12–––0-avoiding inversion sequences leads to a third succession rule for the powered Catalan numbers.

Summing over all the above two cases results in the succession rule Ω12–––0. ∎

The classification of Wilf equivalences for vincular patterns of length 3 in inversion sequences has been completed, thanks to Auli and Elizalde’s recent work111Auli and Elizalde independently initiated their work, we thank them for keeping us informed. [3]. Towards the complete classification of vincular patterns of length 4 in permutations, Baxter and Shattuck conjectured [7] that Sn(23–––14) has cardinality pn, the n-th powered Catalan number. In their attempt to prove this conjecture, Beaton, Bouvel, Guerrini and Rinaldi [8, Conj. 23] found the following refinement.

Conjecture 4.1 is equivalent to the assertion that the statistic ‘zero’ over In(12–––0) or In(110) has the same distribution as ‘rmin’ over Sn(23–––14), where rmin(π) denotes the number of right-to-left minima of a permutation π. Using Maple program, we find the following refinement of Conjecture 4.1.

Here we use lmin(π) (resp. asc(π)) to denote the number of left-to-right minima (resp. ascents) of a permutation π. And for an inversion sequence e∈In, the two statistics involved are

Finally, the consideration of the last entry statistic leads to another refinement of Baxter and Shattuck’s enumeration conjecture.