Offline Writer Identification based on the Path Signature Feature 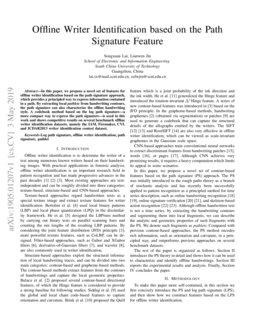 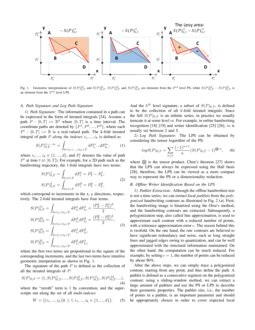 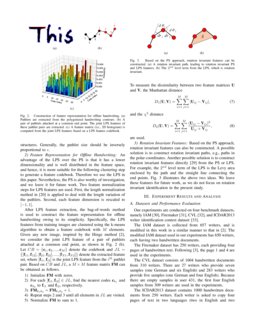 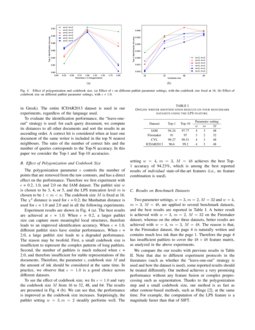 [1][2][3]. Most existing approaches are text-independent and can be roughly divided into three categories: texture-based, structure-based and CNN-based approaches.

Structure-based approaches exploit the structural information of local handwriting traces, and can be divided into two main categories: contour-based and grapheme-based methods. The contour-based methods extract features from the contours of handwritings and capture the local geometric properties. Bulacu et al. [2] proposed several contour-based directional features, of which the Hinge feature is considered to provide a strong baseline for following studies. Siddiqi et al. [9] used the global and local chain code-based features to capture orientation and curvature. Brink et al. [10]

proposed the Quill feature which is a joint probability of the ink direction and the ink width. He et al.

[11] generalized the Hinge feature and introduced the rotation-invariant ΔnHinge feature. A series of new contour-based features was introduced in [3] based on the JFD principle. In the grapheme-based methods, handwriting graphemes [2] (obtained via segmentation) or patches [9] are used to generate a codebook that can capture the structural details of the allographs emitted by the writers. The SIFT [12][13] and RootSIFT [14] are also very effective in offline writer identification, which can be viewed as scale-invariant graphemes in the Gaussian scale space.

[15], words [16], or pages [17]. Although CNN achieves very promising results, it requires a heavy computation which limits its appeal in some scenarios.

In this paper, we propose a novel set of contour-based features based on the path signature (PS) approach. The PS was initially introduced in the rough paths theory as a branch of stochastic analysis and has recently been successfully applied to pattern recognition as a principled method for time series description, such as online handwriting recognition [18][19], online signature verification [20][21], and skeleton-based action recognition [22][23]. Although offline handwritten text is not a time series, by extracting the handwriting contours and segmenting them into local fragments, we can describe the analytic and geometric properties of such fragments with the PS. We denote such fragments as pathlets. Compared with previous contour-based approaches, the PS method encodes rich information, such as orientation and curvature, in a principled way, and outperforms previous approaches on several benchmark datasets.

The rest of the paper is organized as follows. Section II introduces the PS theory in detail and shows how it can be used to characterize and identify offline handwritings. Section III reports the experimental results and analysis. Finally, Section IV concludes the paper.

To make this paper more self-contained, in this section we first concisely introduce the PS and log path signature (LPS), and then show how we construct features based on the LPS for offline writer identification.

The information contained in a path can be expressed in the form of iterated integrals [24]. Assume a path P:[0,T]↦Rd where [0,T] is a time interval. The coordinate paths are denoted by {P1,P2,...,Pd}, where each Pi:[0,T]↦R is a real-valued path. The k-fold iterated integral of path P along the indexes i1,...,ik is defined as

which correspond to increments in the x, y directions, respectively. The 2-fold iterated integrals have four terms:

where the first two terms are proportional to the square of the corresponding increments, and the last two terms have intuitive geometric interpretation as shown in Fig. 1.

The signature of the path P is defined as the collection of all the iterated integrals of P:

where the “zeroth” term is 1 by convention, and the superscripts run along the set of all multi-indexes

And the kth level signature, a subset of S(P)0,T, is defined to be the collection of all k-fold iterated integrals. Since the full S(P)0,T is an infinite series, in practice we usually truncate it at some level m. For example, in online handwriting recognition [18][19] and writer identification [25][26], m is usually set between 2 and 5.

The LPS can be obtained by considering the tensor logarithm of the PS:

where ⨂ is the tensor product. Chen’s theorem [27] shows that the LPS can always be expressed using the Hall basis [28]; therefore, the LPS can be viewed as a more compact way to represent the PS or a dimensionality reduction.

Ii-B Offline Writer Identification Based on the LPS

Although the offline handwritten text is not a time series, we can extract local pathlets from the polygonized

ϵ. The reason behind this is twofold. On the one hand, the raw contours are believed to have significant redundancy and noise, such as long straight lines and jagged edges owing to quantization, and can be well approximated with the structural information maintained. On the other hand, the computation can be much reduced. For example, by setting ϵ=1, the number of points can be reduced by about 90%.

After the above steps, we can simply trace a polygonized contour, starting from any point, and thus define the path. A pathlet is defined as a consecutive segment on the polygonized contour; using a sliding-window method, we can extract a large amount of pathlets and use the PS or LPS to describe their geometric properties. The pathlet size, i.e., the number of points in a pathlet, is an important parameter and should be appropriately chosen in order to cover expected local structures. Generally, the pathlet size should be inversely proportional to ϵ.

An advantage of the LPS over the PS is that it has a lower dimensionality and is well distributed in the feature space, and hence, it is more suitable for the following clustering step to generate a feature codebook. Therefore we use the LPS in this paper. Nevertheless, the PS is also worthy of investigation, and we leave it for future work. Two feature normalization steps for LPS features are used. First, the length normalization method in [20] is applied to deal with the length variation of the pathlets. Second, each feature dimension is rescaled to [−1,1].

After LPS feature extraction, the bag-of-words method is used to construct the feature representation for offline handwriting owing to its simplicity. Specifically, the LPS features from training images are clustered using the k-means algorithm to obtain a feature codebook with

To measure the dissimilarity between two feature matrices U and V, the Manhattan distance

and the χ2 distance

The IAM dataset is collected from 657 writers, and is modified in this work in a similar manner to that in [2]. The modified IAM dataset used in our experiments has 650 writers, each having two handwritten documents.

The Firemaker dataset has 250 writers, each providing four pages of handwritten text. Following [3], the page 1 and 4 are used in the experiments.

The ICDAR2013 dataset contains 1000 handwritten documents from 250 writers. Each writer is asked to copy four pages of text in two languages (two in English and two in Greek). The entire ICDAR2013 dataset is used in our experiments, regardless of the language used.

To evaluate the identification performance, the “leave-one-out” strategy is used: for each query document, we compute its distances to all other documents and sort the results in an ascending order. A correct hit is considered when at least one document of the same writer is included in the top N nearest neighbours. The ratio of the number of correct hits and the number of queries corresponds to the Top-N accuracy. In this paper we consider the Top-1 and Top-10 accuracies.

The polygonization parameter ϵ controls the number of points that are removed from the raw contours, and has a direct effect on the performance. Therefore we first experiment with ϵ = 0.2, 1.0, and 2.0 on the IAM dataset. The pathlet size w is chosen to be 3, 4, or 5, and the LPS truncation level m is chosen to be 1<m<w. The codebook size M is fixed at 16. The χ2 distance is used for ϵ = 0.2; the Manhattan distance is used for ϵ = 1.0 and 2.0 and in all the following experiments.

Experiment results are shown in Fig. 4 (a). The best results are achieved at ϵ = 1.0. When ϵ = 0.2, a larger pathlet size can capture more meaningful local structures, therefore leads to an improved identification accuracy. When ϵ = 1.0, different pathlet sizes have similar performances. When ϵ = 2.0, a large pathlet size leads to a degraded performance. The reason may be twofold. First, a small codebook size is insufficient to represent the complex patterns of long pathlets. Second, the number of pathlets is much reduced when ϵ = 2.0, and therefore insufficient for stable representations of the documents. Therefore, the parameter ϵ, codebook size M and the amount of ink should be considered at the same time. In practice, we observe that ϵ=1.0 is a good choice across different datasets.

To see the effect of codebook size, we fix ϵ=1.0 and vary the codebook size M from 16 to 32, 48, and 64. The results are presented in Fig. 4 (b). We can see that, the performance is improved as the codebook size increases. Surprisingly, the pathlet setting w=3,m=2 steadily performs well. The setting w=4, m=3, M=48 achieves the best Top-1 accuracy of 94.23%, which is among the best reported results of individual state-of-the-art features (i.e., no feature combination is used).

Two parameter settings, w=3, m=2, M=32 and w=4, m=3, M=48, are applied to several benchmark datasets, and the best results are reported in Table I. A better result is achieved with w=3, m=2, M=32 on the Firemaker dataset, whereas on the other three datasets, better results are achieved with w=4, m=3, M=48. The reason is that, in the Firemaker dataset, the page 4 is naturally written and contains much less ink than the page 1. Therefore the page 4 has insufficient pathlets to cover the 48×48 feature matrix, as analyzed in the above experiments.

We compare the our results with previous results in Table II. Note that due to different experiment protocols in the literatures (such as whether the “leave-one-out” strategy is used and how the dataset is used), some reported results should be treated differently. Our method achieves a very promising performance without any feature fusion or complex preprocessing such as segmentation. Thanks to the polygonization step and a small codebook size, our method is as fast as other contour-based methods, such as Hinge[2], at the same time. For example, the computation of the LPS feature is a magnitude faster than that of SIFT.

Iii-D Effect of Amount of Ink

The amount of ink is important for the offline writer identification systems. To test how the performance of our method varies with amount of ink in query documents, we conduct the following line-level identification experiment. We crop the fourth pages from the CVL dataset into text lines using the line projection method, with some necessary manual adjustments. Some examples are shown in Fig. 5. As there are at least four text lines within each document, we take the first four text lines from each document. When using a single text line as a query, the number of queries is 4×309=1236; when using two text lines and three text lines, the numbers of queries are C24×309=1854 and C34×309=1236, respectively. The first three pages are used as templates, while the text lines are used as the test set. The “leave-one-out” strategy is not applied here, and the setting w=4, m=3, M=48 is used. Experiment results are shown in Table III. Using only one single text line as a query, our method can achieve a top-1 accuracy of 95.31%. Therefore our method is rather data efficient.

In this paper, we propose a novel set of features for offline writer identification based on the PS approach. The PS provides a principled way to express information contained in a path, such as orientation and curvature, and has achieved significant success in time series description. By extracting local pathlets from offline handwriting images, the PS can also to characterize the offline handwriting style. A codebook method based on the LPS—a more compact way to express the PS—is used in this work and shows competitive results on several benchmark datasets. Investigations of the PS, rotation invariant features and feature fusion are leaved for future work. Furthermore, how to improve the performance when no sufficient amount of ink is available is an important research direction.