The H_∞ control design problem is considered for nonlinear systems with unknown internal system model. It is known that the nonlinear H_∞ control problem can be transformed into solving the so-called Hamilton-Jacobi-Isaacs (HJI) equation, which is a nonlinear partial differential equation that is generally impossible to be solved analytically. Even worse, model-based approaches cannot be used for approximately solving HJI equation, when the accurate system model is unavailable or costly to obtain in practice. To overcome these difficulties, an off-policy reinforcement leaning (RL) method is introduced to learn the solution of HJI equation from real system data instead of mathematical system model, and its convergence is proved. In the off-policy RL method, the system data can be generated with arbitrary policies rather than the evaluating policy, which is extremely important and promising for practical systems. For implementation purpose, a neural network (NN) based actor-critic structure is employed and a least-square NN weight update algorithm is derived based on the method of weighted residuals. Finally, the developed NN-based off-policy RL method is tested on a linear F16 aircraft plant, and further applied to a rotational/translational actuator system. 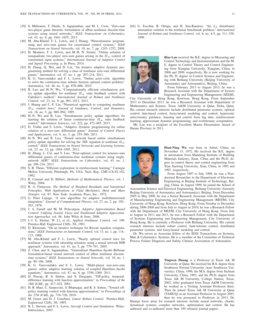 [1, 2, 3, 4]. RL technique refers to an actor or agent that interacts with its environment and aims to learn the optimal actions, or control policies, by observing their responses from the environment. In [2]

, Sutton and Barto suggested a definition of RL method, i.e., any method that is well suited for solving RL problem can be regarded as a RL method, where the RL problem is defined in terms of optimal control of Markov decision processes. This obviously established the relationship between the RL method and control community. Moreover, RL methods have the ability to find an optimal control policy from unknown environment, which makes RL a promising method for control design of real systems.

In the past few years, many RL approaches [5, 6, 7, 8, 9, 10, 11, 12, 13, 14, 15, 16, 17, 18, 19, 20, 21, 22, 23] have been introduced for solving the optimal control problems. Especially, some extremely important results were reported by using RL for solving the optimal control problem of discrete-time systems [7, 10, 14, 17, 18, 22]. Such as, Liu and Wei suggested a finite-approximation-error based iterative adaptive dynamic programming approach [17], and a novel policy iteration (PI) method [22] for discrete-time nonlinear systems. For continuous-time systems, Murray et al. [5] presented two PI algorithms that avoid the necessity of knowing the internal system dynamics. Vrabie et al. [8, 9, 13] introduced the thought of PI and proposed an important framework of integral reinforcement learning (IRL). Modares et al. [21] developed an experience replay based IRL algorithm for nonlinear partially unknown constrained-input systems. In [19], an online neural network (NN) based decentralized control strategy was developed for stabilizing a class of continuous-time nonlinear interconnected large-scale systems. In addition, it worth mentioning that the thought of RL methods have also been introduced to solve the optimal control problem of partial differential equation systems [6, 12, 15, 16, 23]. However, for most of practical real systems, the existence of external disturbances is usually unavoidable.

To reduce the effects of disturbance, robust controller is required for disturbance rejection. One effective solution is the H∞ control method, which achieves disturbance attenuation in the L2-gain setting [24, 25, 26], that is, to design a controller such that the ratio of the objective output energy to the disturbance energy is less than a prescribed level. Over the past few decades, a large number of theoretical results on nonlinear H∞ control have been reported [27, 28, 29], where the H∞ control problem can be transformed into how to solve the so-called Hamilton-Jacobi-Isaacs (HJI) equation. However, the HJI equation is a nonlinear partial differential equation (PDE), which is difficult or impossible to solve, and may not have global analytic solutions even in simple cases.

Thus, some works have been reported to solve the HJI equation approximately [27, 30, 31, 32, 33, 34, 35]. In [27], it was shown that there exists a sequence of policy iterations on the control input such that the HJI equation is successively approximated with a sequence of Hamilton-Jacobi-Bellman (HJB)-like equations. Then, the methods for solving HJB equation can be extended for the HJI equation. In [36], the HJB equation was successively approximated by a sequence of linear PDEs, which were solved with Galerkin approximation in [30, 37, 38]. In [39], the successive approximation method was extended to solve the discrete-time HJI equation. Similar to [30], a policy iteration scheme was developed in [31] for the constrained input system. For implementation purpose of this scheme, a neuro-dynamic programming approach was introduced in [40] and an online adaptive method was given in [41]. This approach suits for the case that the saddle point exists, thus a situation that the smooth saddle point does not exist was considered in [42]. In [32], a synchronous policy iteration method was developed, which is the extension of the work [43]. To improve the efficiency for computing the solution of HJI equation, Luo and Wu [44] proposed a computationally efficient simultaneous policy update algorithm (SPUA). In addition, in [45] the solution of the HJI equation was approximated by the Taylor series expansion, and an efficient algorithm was furnished to generate the coefficients of the Taylor series. It is observed that most of these methods [27, 30, 31, 32, 33, 35, 40, 44, 45] are model-based, where the full system model is required. However, the accurate system model is usually unavailable or costly to obtain for many practical systems. Thus, some RL approaches have been proposed for H∞ control design of linear systems [46, 47] and nonlinear systems [48] with unknown internal system model. But these methods are on-policy learning approaches [32, 46, 41, 47, 48, 49], where the cost function should be evaluated by using system data generated with policies being evaluated. It is found that there are several drawbacks (to be discussed in Section III) to apply the on-policy learning to solve real H∞ control problem.

To overcome this problem, this paper introduces an off-policy RL method to solve the nonlinear continuous-time H∞ control problem with unknown internal system model. The rest of the paper is rearranged as follows. Sections II and III present the problem description and the motivation. The off-policy learning methods for nonlinear systems and linear systems are developed in IV and V respectively. The simulation studies are conducted in Section VI and a brief conclusion is given in Section VII.

Notations: R,Rn and Rn×m are the set of real numbers, the n-dimensional Euclidean space and the set of all real matrices, respectively. ∥⋅∥

denotes the vector norm or matrix norm in

Rn or Rn×m , respectively. The superscript T is used for the transpose and I denotes the identify matrix of appropriate dimension. ▽≜∂/∂x denotes a gradient operator notation. For a symmetric matrix M,M>(⩾)0 means that it is a positive (semi-positive) definite matrix. ∥v∥2M≜vTMv for some real vector v and symmetric matrix M>(⩾)0 with appropriate dimensions. C1(X) is function space on X with first derivatives are continuous. L2[0,∞) is a Banach space, for ∀w(t)∈L2[0,∞),∫∞0∥w(t)∥2dt<∞. Let X,U and W be compact sets, denote D≜{(x,u,w)|x∈X,u∈U,w∈W}. For column vector functions s1(x,u,w) and s2(x,u,w) , where (x,u,w)∈D Ôºå define inner product and norm ∥s1(x,u,w)∥D ≜(∫DsT1(x,u,w)s1(x,u,w)d(x,u,w))1/2. Hm,p(X) is a Sobolev space that consists of functions in space Lp(X) such that their derivatives of order at least m are also in Lp(X).

The H∞ control problem under consideration is to find a state feedback control law u(x) such that the system (1) is closed-loop asymptotically stable, and has L2-gain less than or equal to γ , that is,

for all w(t)∈L2[0,∞),R>0 and γ>0 is some prescribed level of disturbance attenuation. From [27], this problem can be transformed to solve the so-called HJI equation, which is summarized in Lemma 1.

Assume the system (1) and (2) is zero-state observable. For γ>0 , suppose there exists a solution V∗(x) to the HJI equation

From Lemma 1, it is noted that the H∞ control (5) relies on the solution of the HJI equation (1). Therefore, a model-based iterative method was proposed in [30], where the HJI equation is successively approximated by a sequence of linear PDEs:

and then update control and disturbance policies with

The procedure of model-based SPUA is given in Algorithm 1.

It worth noting that Algorithm 1 is an infinite iterative procedure, which is used for theoretical analysis rather than for implementation purpose. That is to say, Algorithm 1 will converge to the solution of the HJI equation (1) when the iteration goes to infinity. By constructing a fixed point equation, the convergence of Algorithm 1 is established in [44] by proving that it is essentially a Newton‚Äôs iteration method for finding the fixed point. With the increase of index i, the sequence V(i) obtained by the SPUA with equations (9)-(1) can converge to the solution of HJI equation (1), i.e., limi→∞V(i)=V∗.

Observe that both iterative equations (III) and (1) require the full system model. For the H∞ control problem that the internal system dynamic f(x) is unknown, data based methods [47, 48] were suggested to solve the HJI equation online. However, most of related existing online methods are on-policy learning approaches [32, 41, 47, 48, 49]. From the definition of on-policy learning [2], the cost function should be evaluated with the data generated from the evaluating policies. For example, V(i,j+1) in equation (III) is the cost function of the policies w(i,j) and u(i), which means that V(i,j+1) should be evaluated with system data by using evaluating policies w(i,j) and u(i). It is observed that these on-policy learning approaches for solving the H∞ control problem have several drawbacks:

To overcome the drawbacks mentioned above, we propose an off-policy RL approach to solve the H∞ control problem with unknown internal system dynamic f(x).

In this section, an off-policy RL method for H∞ control design is derived and its convergence is proved. Then, a NN-based critic-actor structure is developed for implementation purpose.

To derive the off-policy RL method, we rewrite the system (1) as:

With the linear PDE (1), conducting integral on both sides of equation (IV-A) in time interval [t,t+Δt] and rearranging terms yield,

It is observed from the equation (IV-A) that the cost function V(i+1) can be learned by using arbitrary input signals u and w, rather than the evaluating policies u(i) and w(i). Then, replacing linear PDE (1) in Algorithm 1 with (IV-A) results in the off-policy RL method. To show its convergence, Theorem 1 establishes the equivalence between iterative equations (1) and (IV-A).

Before starting the contradiction proof, we derive a simple fact. Consider

By using the fact (IV-A), the equation (IV-A) is rewritten as

Iv-B Implementation based on neural network

To solve equation (IV-A) for the unknown function V(i+1)(x) based on system data, we develop a NN based actor-critic structure. From the well known high-order Weierstrass approximation theorem [51], a continuous function can be represented by an infinite-dimensional linearly independent basis function set. For real practical application, it is usually required to approximate the function in a compact set with a finite-dimensional function set. We consider the critic NN for approximating the cost function on a compact set X. Let φ(x)≜[φ1(x) ... φL(x)]T

be the vector of linearly independent activation functions for critic NN, where

Due to estimation errors of the critic and actor NNs (21)-(23), the replacement of V(i+1),w(i) and u(i) in the iterative equation (IV-A) with ˆV(i+1),ˆw(i) and ˆu(i) respectively, yields the following residual error:

then, expression (IV-B) is rewritten as

For description convenience, expression (IV-B) is represented as a compact form