The state-of-the-art video-based point cloud compression scheme projects the 3D point cloud to 2D patch by patch and organizes the patches into frames to compress them using the efficient video compression scheme. Such a scheme shows a good trade-off between the number of points projected and the video continuity to utilize the video compression scheme. However, some unoccupied pixels between different patches are compressed using almost the same quality with the occupied pixels, which will lead to the waste of lots of bits since the unoccupied pixels are useless for the reconstructed point cloud. In this paper, we propose to consider only the rate instead of the rate distortion cost for the unoccupied pixels during the rate distortion optimization process. The proposed scheme can be applied to both the geometry and attribute frames. The experimental results show that the proposed algorithm can achieve an average of 11.9 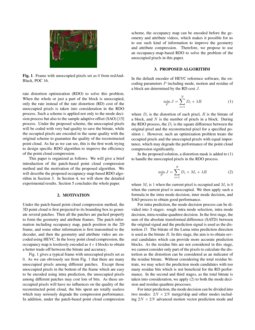 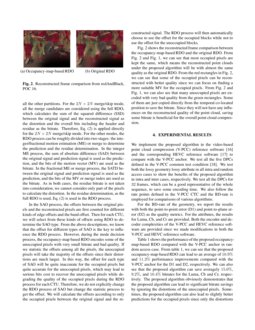 Point cloud is a set of 3D points with each point associated with some attributes such as color, reflection, and so on. As point cloud has the capability to render an object or scene, the point cloud can be used in many scenarios [1] such as 3D immersive telepresence [2], virtual reality, and some other applications. However, the large size for the point cloud especially the dynamic point cloud (DPC) is preventing the usage of such a promising media format. For example, for a DPC with 300 frames, each frame with one million points, each point with 30 and 24 bits to represent the geometry and attribute, the original size can be as large as 2GBytes. Therefore, there is an urgent need to compress the DPC efficiently.

In addition to its large size, the isolated points also make the point cloud difficult to be compressed due to the irregular patterns. The current methods used for DPC compression can be roughly divided into two groups: the 3D-based method and the video-based method. As its name implies, the 3D-based method compresses the point cloud in the original domain. Usually, the geometry of the first frame will be compressed using the octree tree [3] or binary tree combined with the quadtree [4]

. Some transforms such as Graph Fourier Transform (GFT)

[5] and region-adaptive hierarchical transform (RAHT) [6] or layer based prediction [7] are used to compress the attributes. For the inter frames, the key is to exploit the intercorrelations among various frames of the point cloud. For example, Queiroz and Chou [8]

proposed to divide the frames into multiple cubes and perform the translational motion model based motion estimation to find the corresponding cube in the previously coded frame. Mekuria

et al. [9] further introduced the iterative closest points instead of the translational motion model to improve the coding efficiency. However, the 3D-based schemes are unable to fully exploit the correlations among various views, which make the compression ratio unsatisfiable.

The video-based method which projects the 3D point cloud into 2D space to fully utilize the intercorrelations using the mature video compression schemes such as High Efficiency Video Coding (HEVC) [10]. For example, Schwarz et al. [11] and He et al. [12] proposed to use cylinder or cube projection to project the point cloud to a 2D video, and the 2D video is compressed using HEVC. However, such kind of methods may lose lots of points due to the points occlusion in 3D space. To solve this problem, Mammou et al. [7] [13] proposed to project the point cloud to 2D video patch by patch to increase the number of points projected. The projected video is then compressed using HEVC and wins the competition of the MEPG call for proposal for the dynamic point cloud compression [14]. Such a video-based method will be called as patch-based point cloud compression in the following sections. However, many unoccupied pixels of the projected video are not beneficial for the quality of the reconstructed video, which will lead to a serious waste of the bits if they are encoded in the same quality with the occupied pixels. The unoccupied pixels are even not continuous in the temporal domain, which may lead to even more bits waste.

In this paper, we propose to use the occupancy-map-based rate distortion optimization (RDO) to solve this problem. When the whole or just a part of the block is unoccupied, only the rate instead of the rate distortion (RD) cost of the unoccupied pixels is taken into consideration in the RDO process. Such a scheme is applied not only to the mode decision process but also to the sample adaptive offset (SAO) [15] process. Under the proposed scheme, the unoccupied pixels will be coded with very bad quality to save the bitrate, while the occupied pixels are encoded in the same quality with the original scheme to guarantee the quality of the reconstructed point cloud. As far as we can see, this is the first work trying to design specific RDO algorithm to improve the efficiency of the point cloud compression.

This paper is organized as follows. We will give a brief introduction of the patch-based point cloud compression method and the motivation of the proposed algorithm. We will describe the proposed occupancy-map-based RDO algorithm in Section 3. In Section 4, we will show the detailed experimental results. Section 5 concludes the whole paper.

Under the patch-based point cloud compression method, the 3D point cloud is first projected to its bounding box to generate several patches. Then all the patches are packed properly to form the geometry and attribute frames. The patch information including occupancy map, patch position in the 2D frame, and some other information is first transmitted to the decoder, and then the geometry and attribute video are encoded using HEVC. In the lossy point cloud compression, the occupancy map is losslessly encoded as 4×4 blocks to obtain a better trade-off between the bitrate and accuracy.

In the default encoder of HEVC reference software, the encoding parameters P including mode, motion and residue of a block are determined by the RD cost J.

where Di is the distortion of each pixel, R is the bitrate of a block, and N is the number of pixels in a block. During the RDO process, the Di is the square difference between the original pixel and the reconstructed pixel for a specified position i. However, such an optimization problem treats the occupied pixels and the unoccupied pixels with equal importance, which may degrade the performance of the point cloud compression significantly.

In the proposed solution, a distortion mask is added to (1) to handle the unoccupied pixels in the RDO process.

For intra prediction, the mode decision process can be divided into 3 stages: rough intra mode selection, intra mode decision, intra residue quadtree decision. In the first stage, the sum of the absolute transformed difference (SATD) between the original signal and the prediction signal is used as the distortion D. The bitrate of the Luma intra prediction direction is used as the bitrate R. In this stage, the aim is to obtain several candidates which can provide more accurate prediction blocks. As the residue bits are not considered in this stage, we cannot consider only part of the pixels to calculate the distortion as the distortion can be considered as an indicator of the residue bitrate. Without considering the total residue bitrate, we may select the prediction mode candidates with too many residue bits which is not beneficial for the RD performance. In the second and third stages, as the total bitrate is taken into consideration, we apply (2) to both the mode decision and residue quadtree processes.

For inter prediction, the mode decision can be divided into two modes: 2N×2N merge/skip and other modes including 2N×2N

advanced motion vector prediction mode and all the other partitions. For the

We implement the proposed algorithm in the video-based point cloud compression (V-PCC) reference software [16] and the corresponding HEVC reference software [17] to compare with the V-PCC anchor. We test all the five DPCs defined in the V-PCC common test condition [18]. We test both the lossy geometry lossy attribute in all intra and random access cases to show the benefits of the proposed algorithm in intra and inter cases, respectively. We test all the DPCs for 32 frames, which can be a good representative of the whole sequence, to save some encoding time. We also follow the rate points defined in the V-PCC CTC and the BD-rate is employed for comparisons of various algorithms.

For the BD-rate of the geometry, we report the results with both the point-to-point error (D1) and point-to-plane error (D2) as the quality metrics. For the attributes, the results for Luma, Cb, and Cr are provided. Both the encoder and decoder complexities of the V-PCC and HEVC reference software are provided since we made modifications in both the V-PCC and HEVC reference software.

The proposed algorithm will not have significant influences on the V-PCC encoder and decoder themselves since we only output the occupancy map information from the encoder. However, for the HEVC encoder, the proposed algorithm can lead to significant time savings for the encoder and decoder since the motion estimation and motion compensation processes are both significantly simplified. For the encoder, there is no need to search over too many merge candidates and MVs especially for the unoccupied pixels thus the encoding complexity can be reduced. For the decoder, more blocks will choose zero motion vectors, which lead to fewer interpolation operations and save the decoding complexity.

In this paper, to prevent the wasting of the bitrate on the unoccupied pixels in the video-based point cloud compression (V-PCC) scheme, we propose to consider only the rate instead of the rate distortion cost for the unoccupied pixels during the rate distortion optimization process. The proposed idea is applied to intra prediction, inter prediction and sample adaptive offset processes. The proposed algorithm is implemented in the V-PCC and the corresponding High Efficiency Video Coding reference softwares. The experimental results show that the proposed algorithm can lead to averagely 11.9% and 15.4% bitrate savings for the geometry and attribute, respectively. In the future, we will further consider the blocks in the patch boundary with part of blocks occupied while the other part of blocks unoccupied to further improve the performance.