Automatic (i.e., computer-assisted) theorem proving (ATP) can come in many flavors. This document presents early steps in our effort towards defining object-oriented theorem proving (OOTP) as a new style of ATP. Traditional theorem proving (TTP) is the only well-known flavor of ATP so far. OOTP is a generalization of TTP. While TTP is strongly based on functional programming (FP), OOTP is strongly based on object-oriented programming (OOP) instead. We believe OOTP is a style of theorem proving that is no less powerful and no less natural than TTP and thus likely will be no less practically useful than TTP. In the document we also discuss, very briefly, a related notion of OO software verification (OOSV) based on OOTP. To clarify the relation between OOTP and TTP, we also touch on the relation between OOP and FP. 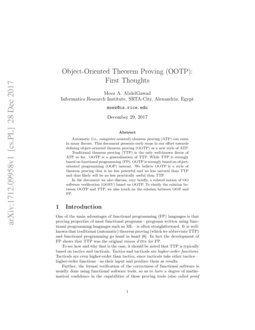 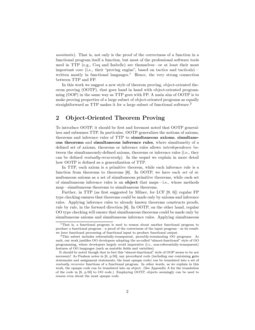 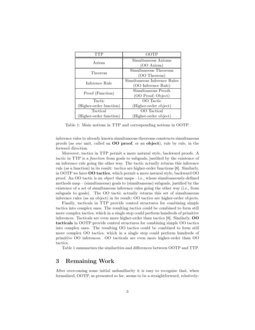 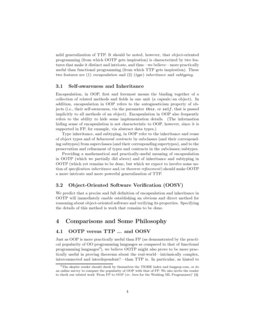 Evidence Algorithm and System for Automated Deduction: A Retrospective View

INT: An Inequality Benchmark for Evaluating Generalization in Theorem Proving

In learning-assisted theorem proving, one of the most critical challenge...
Yuhuai Wu, et al. ∙

Computer-Assisted Proving of Combinatorial Conjectures Over Finite Domains: A Case Study of a Chess Conjecture

How do humans succeed in tasks like proving Fermat's Theorem or predicting the Higgs boson?

Formalising Filesystems in the ACL2 Theorem Prover: an Application to FAT32

In this work we suggest a new style of theorem proving, object-oriented theorem proving (OOTP), that goes hand in hand with object-oriented programming (OOP) in the same way as TTP goes with FP. A main aim of OOTP is to make proving properties of a large subset of object-oriented programs as equally straightforward as TTP makes it for a large subset of functional software.222This subset includes referentially-transparent, provably-terminating OO programs. As such, our work justifies OO developers adopting the so-called “almost-functional” style of OO programming, where developers largely avoid imperative (i.e., non-referentially-transparent) features of OO languages (such as mutable fields and variables). It should be noted though that in fact this “almost-functional” style of OOP seems to be not necessary! As Paulson notes in [8, p.58], any procedural code (including one containing goto statements and assignment statements, the least opaque code) can be translated into a set of mutually recursive functions of a functional program. In other words, as we explain in this work, the opaque code can be translated into an object. (See Appendix A for the translation of the code in [8, p.58] to OO code.) Employing OOTP, objects seemingly can be used to reason even about the most opaque code.

Moreover, tactics in TTP permit a more natural style, backward proofs. A tactic in TTP is a function from goals to subgoals, justified by the existence of an inference rule going the other way. The tactic actually returns this inference rule (as a function) in its result: tactics are higher-order functions [8]. Similarly, in OOTP we have OO tactics, which permit a more natural style, backward OO proof. An OO tactic is an object that maps—i.e., whose simultaneously-defined methods map—(simultaneous) goals to (simultaneous) subgoals, justified by the existence of a set of simultaneous inference rules going the other way (i.e., from subgoals to goals). The OO tactic actually returns this set of simultaneous inference rules (as an object) in its result: OO tactics are higher-order objects.

Table 1 summarizes the similarities and differences between OOTP and TTP.

After overcoming some initial unfamiliarity it is easy to recognize that, when formalized, OOTP, as presented so far, seems to be a straightforward, relatively-mild generalization of TTP. It should be noted, however, that object-oriented programming (from which OOTP gets inspiration) is characterized by two features that make it distinct and intricate, and thus—we believe—more practically useful than functional programming (from which TTP gets inspiration). These two features are (1) encapsulation and (2) (type) inheritance and subtyping.

Encapsulation, in OOP, first and foremost means the binding together of a collection of related methods and fields in one unit (a capsule/an object). In addition, encapsulation in OOP refers to the autognosticism property of objects (i.e., their self-awareness, via the parameter this, or self, that is passed implicitly to all methods of an object). Encapsulation in OOP also frequently refers to the ability to hide some implementation details. (The information hiding sense of encapsulation is not characteristic to OOP, however, since it is supported in FP, for example, via abstract data types.)

Providing a mathematical and practically-useful meaning of encapsulation in OOTP (which we partially did above) and of inheritance and subtyping in OOTP (which yet remains to be done, but which we expect to involve some notion of specification inheritance and/or theorem refinement) should make OOTP a more intricate and more powerful generalization of TTP.

We predict that a precise and full definition of encapsulation and inheritance in OOTP will immediately enable establishing an obvious and direct method for reasoning about object-oriented software and verifying its properties. Specifying the details of this method is work that remains to be done.

4 Comparisons and Some Philosophy

Just as OOP is more practically useful than FP (as demonstrated by the practical popularity of OO programming languages as compared to that of functional programming languages333The skeptic reader should check by themselves the TIOBE index and langpop.com, or do an online survey to compare the popularity of OOP with that of FP. We also invite the reader to check our related work ‘From FP to OOP (or, Java for the Working ML Programmer)’ [4].), we believe OOTP might also prove to be more practically useful in proving theorems about the real-world—intrinsically complex, interconnected and interdependent?—than TTP is. In particular, as hinted to above we believe OOTP, given its inherent object-orientation, can be used to reason about and verify OO software (OOSV) in a more natural manner.

In this section we briefly discuss the relation between OOP, as a computer programming paradigm centered around objects, and FP, as a paradigm centered around functions, by presenting an analogy and some philosophy. We offer what we believe is a novel prespective but we do not go into plenty of details given that the topic has been discussed, extensively but inconclusively, in the research literature (e.g., as revealed by [7] and related work, or by an online search for ‘the expression problem’).

Based on our modeling of nominal OOP and structural OOP [1], in our opinion the main and most fundamental difference between OOP and FP is that OOP embraces mutual recursion wholeheartedly (mutually recursive methods come essentially for free in OOP) while FP embraces mutual recursion reluctantly (mutually recursive functions require special constructs in FP, and even then their use is discouraged444See the code example in Appendix A for an FP warning against some definitions of mutually-recursive non-imperative functions.).

We find this analogy appropriate because in OOP an object, at its very core, is a set of functions (the methods of the object, possibly mutually recursively defined). That is, in OOP an object is a finite set of tightly related functions but each method in an object, on its own, is not considered as a fundamental independent unit (i.e., in OOP rarely, or at least less-frequently, does a single method have an independent meaning, outside the context of an object) but rather the grouping and binding of the set of functions (as methods) in one unit (as an object, via the notion of this/self) is the fundamental, smallest-meaningful unit in OOP. Functional languages, on the other hand, consider it to be the norm that each function has an independent meaning, and they allow mutually-recursive functions usually only as a rare (and “complex”) exception.

As such, akin to the view of words and letters in most natural languages, OOP considers mutually-dependent functions as the norm (and thus embraces their grouping as a fundamental unit: an objects) while considering single functions having independent meanings as being an exception (i.e., only very few objects have single meaningful methods in an OOP program, e.g., the equals() method of class Object777Even equals() is not quite independent. Its definition usually requires to be “in sync” with the definition of hashCode() [5].). Functional programming, on the other hand, similar only to very few natural languages, considers functions having independent meanings as the norm (as we explained above).

We believe these three questions to be somewhat philosophical questions, whose answers will always remain controversial, rather than being technical questions whose answers can be resolved scientifically. While having our own personal answers to these questions (squarely in favor of OOP), we hope the brief discussion above—including the illustrating analogy with natural languages—sheds some light on why we believe these questions are lesser technical and scientific ones and more controversial and philosophical ones.888We believe research on FP should aim to suggest how OOP can be improved—e.g., as was done in Java 8.0—but should not aim for FP replacing OOP.,999Our opinion is formed based on nothing related to any software efficiency arguments, in spite of their importance. We believe efficiency arguments are fundamentally ambivalent, agnostic or neutral towards the ‘OOP versus FP’ question. Efficiency of computer software, particularly time and space efficiency, is almost always due to the existence of imperative programming features in a programming language. Imperative programming features, which are usually found in OOP but not FP languages, are not inherent or characteristic of OOP, and can be added to a FP language with little additional complexity to the language (as ML—a popular functional language—demonstrates).

We are currently working on further exploration and refinement of our ideas on OOTP by implementing a basic OO theorem prover in three programming languages: ML (FP), Java (OOP) and Scala (OOP/FP), using theorem prover ideas from our implementation of Paulson’s Hal [8] and our update [2] to Velleman’s Proof Designer [10, 11]. Early versions of our code should be available on sourceforge and github in the near future. Stay tuned.

Appendix A Opaque Code Translated to OOP and FP Code

a.1 Imperative to OOP

can be translated to the following non-imperative OO code

Calling new C(0,0,0).F() returns an object equivalent to new C(1,1,0), as expected. The code can be also translated to the following (more succinct, but harder to reason about) imperative OO code

It should be noted that in the OO code above all unqualified field references and methods calls are implicitly done via this.

a.2 Imperative to FP

For comparison purposes, the corresponding mutually-recursive functional translation (adapted from the code in [8, p.58]) of the opaque imperative code above looks like