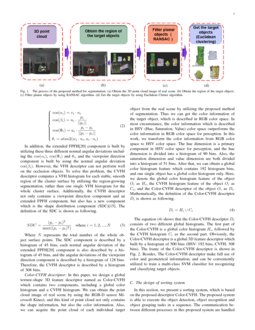 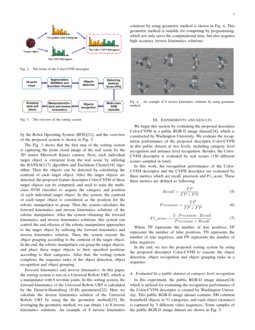 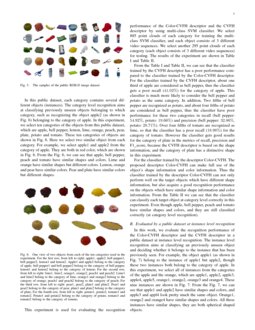 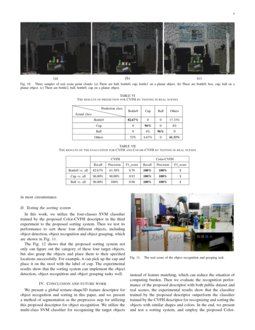 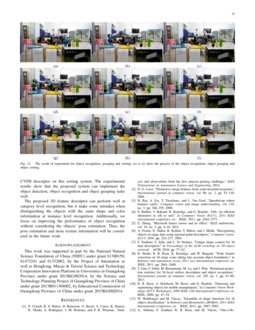 I Introduction and related work

With the development of e-commerce, it becomes more and more important for the autonomous robots to execute object sorting task in a warehouse. As the autonomous robots executing objects sorting tasks in a warehouse, they need to locate the target objects and identify what the objects are. All these information can be provided by object recognition. However, it is still a relatively challenging and difficult task to design a reliable and effective object recognition system.[1]

It is a common way to utilize the features of the target objects in the 2D image plane for executing object recognition. There are several examples of these approaches, which are SIFT[2], SURF[3] and ORB[4]. Even though these methods can perform well on the objects with high texture, they show inefficiency on textureless objects.

In this work, we propose a global texture-shape 3D feature descriptor for object recognition and sorting. The contributions of the paper are: (1) We present a global texture-shape 3D feature descriptor which is generated by extending the clustered viewpoint feature histogram (CVFH)[15] with textured information. (2) We evaluate the recognition performance of the proposed descriptor with both public 3D image dataset and real scenes, and utilize our proposed sorting system to implement the object detection, object recognition and object grasping tasks in a sequence. (3) We use a multi-class support vector machine (SVM)[16]classifier for recognizing target objects instead of feature matching, which can reduce the situation of computing burden. Additionally, Training multi-class classifier does not need a large data set and lengthy training process.

The paper is organized as follows. The sorting system including the proposed feature descriptor is described in Section II. The experiments and results are shown in Section III. In the end, we have conclusions and future work in Section IV.

In this section, the method of segmentation are presented first. Then we describe the global texture-shape 3D feature descriptor in detail. The proposed object recognition and grasping system is presented at the end of the section.

Ii-a The method of segmentation

Here, we present a method of segmentation as the preprocess for utilizing the proposed 3D global descriptor to recognize the target objects. In this paper, we utilize the 3D sensor Microsoft Kinect camera to capture the point cloud image of real scene, Fig. 1 shows the process of the proposed method for segmentation.

CVFH descriptor[15]: The CVFH stems from the viewpoint feature histogram (VFH)[19]. The VFH descriptor is a 3D global descriptor which formed by four different angular distributions of the object surface normals. In addition, the VFH consists of two components, including viewpoint direction component and extended FPFH[20] component. Here, the centroid of the whole surface points is denote by pc, and the normal of this centroid pc is name as nc (||nc||=1). Also, we set a local reference coordinate frame (ui, vi, wi) for every point pi of the object surface point, and we can obtain the following equations[19].

The norm of every point pi of the object surface point is name as ni, and we can obtain four different normal angular deviations by using the following equations[19].

In addition, the extended FPFH[20] component is built by utilizing these three different normal angular deviations including the cos(αi), cos(Φi) and θi, and the viewpoint direction component is built by using the normal angular deviation cos(βi). However, the VFH descriptor can not perform well on the occlusion objects. To solve this problem, the CVFH descriptor computes a VFH histogram for each stable, smooth region of the cluster surface by utilizing the region-growing segmentation, rather than one single VFH histogram for the whole cluster surface. Additionally, the CVFH descriptor not only contains a viewpoint direction component and an extended FPFH component, but also has a new component which is the shape distribution component (SDC)[15]. The definition of the SDC is shown as following.

Ii-C The design of sorting system

In the end, we test the proposed sorting system by using the proposed descriptor Color-CVFH to execute the object detection, object recognition and object grasping tasks in a sequence.

Iii-a Evaluated by a public dataset at category level recognition

In this public dataset, each category contains several different objects (instances). The category level recognition aims at classifying previously unseen objects belonging to which category, such as recognizing the object apple2 (as shown in Fig. 6) belonging to the category of apple. In this experiment, we select ten categories of the objects from this public dataset, which are apple, bell pepper, lemon, lime, orange, peach, pear, plate, potato and tomato. These ten categories of objects are shown in Fig. 6. Here we select two similar object from each category. For example, we select apple1 and apple2 from the category of apple. They are both in red color, which are shown in Fig. 6. From the Fig. 6, we can see that apple, bell pepper, peach and tomato have similar shapes and colors. Lime and orange have similar shapes but different colors. Lemon, orange and pear have similar colors. Pear and plate have similar colors but different shapes.

Iii-B Evaluated by a public dataset at instance level recognition

In this work, we evaluate the recognition performance of the Color-CVFH descriptor and the CVFH descriptor in a public dataset at instance level recognition. The instance level recognition aims at classifying an previously unseen object and deciding whether it belongs to the instance that has been previously seen. For example, the object apple1 (as shown in Fig. 7) belong to the instance of apple1 but apple2, though these two instances both belong to the category of apple. In this experiment, we select all of instances from the categories of the apple and the orange, which are apple1, apple2, apple3, apple4, apple5, orange1, orange2, orange3 and orange4. These nine instances are shown in Fig. 7. From the Fig. 7, we can see that apple1 and apple2 have similar shapes and colors, and apple3 and appl4 look pretty much the same object. Orange1, orange2 and orange4 have similar shapes and colors. All these instances have similar shapes, they are both spherical shaped objects.

Contributed by the combination of the shape information and color information, the classifier trained by the descriptor Color-CVFH can perform well in this experiment. It can be observed from the Table V that most of the target objects are classified correctly at instance level in this experiment. Even though the instances belonging to the category of the orange are look similar in both shape and color, they both acquire good performance in terms of recall, precision and F1_score. However, because the apple3 and apple4 look pretty much the same object, including shape and color, this classifier makes some mistakes when recognizing the apple3 and apple4.

In this work, we evaluate the recognition performance of the Color-CVFH descriptor and the CVFH descriptor in real scenes. The objects which are applied for this experiment are bottle0, cup, ball, bottle1, bottle2 and box. These six objects are shown in Fig. 8, and the Fig. 9 shows the point clouds of these six objects. Also, these six objects are divided into four categories, which are bottle0, cup, ball and others. The object bottle0, object cup and object ball belong to the category of bottle0, the category of cup and the category of ball respectively, and the object bottle1, object bottle2 and object box both belong to the category of others. The category of others contains 45 different point clouds, and each of the other three categories are built by 100 different point clouds. All these point cloud are acquired by the 3D sensor Microsoft Kinect camera on multiple views. It can be observed from the Fig. 8 and Fig. 9 that the bottle0 and bottle1 are in the same shape, but they have different colors. The bottle0 is similar to bottle2 both in shape and color. The cup and the box share some similarities in shape and color from a certain angle (as shown in Fig. 9). However, the ball has distinctive shape in this experiment. All these point clouds are used for training the multi-class SVM classifiers to evaluate the recognition performance of the Color-CVFH descriptor and the CVFH descriptor.

In this work, we utilize the four-classes SVM classifier trained by the proposed Color-CVFH descriptor in the third experiment to the proposed sorting system. Then we test its performance to sort these four different objects, including object detection, object recognition and object grasping, which are shown in Fig. 11.

The Fig. 12 shows that the proposed sorting system not only can figure out the category of these four target objects, but also grasp the objects and place them to their specified locations successfully. For example, it can pick up the cup and place it on the stool with the label of cup. The experimental results show that the sorting system can implement the object detection, object recognition and object grasping tasks well.

The proposed 3D feature descriptor can perform well at category level recognition, but it make some mistakes when distinguishing the objects with the same shape and color information at instance level recognition. Additionally, we focus on improving the performance of object recognition without considering the objects’ pose estimation. Thus, the pose estimation and more texture information will be considered in the future work.