The Object-Based Image Coding (OBIC) that was extensively studied about two decades ago, promised a vast application perspective for both ultra-low bitrate communication and high-level semantical content understanding, but it had rarely been used due to the inefficient compact representation of object with arbitrary shape. A fundamental issue behind is how to efficiently process the arbitrary-shaped objects at a fine granularity (e.g., feature element or pixel wise). To attack this, we have proposed to apply the element-wise masking and compression by devising an object segmentation network for image layer decomposition, and parallel convolution-based neural image compression networks to process masked foreground objects and background scene separately. All components are optimized in an end-to-end learning framework to intelligently weigh their (e.g., object and background) contributions for visually pleasant reconstruction. We have conducted comprehensive experiments to evaluate the performance on PASCAL VOC dataset at a very low bitrate scenario (e.g., ≲0.1 bits per pixel - bpp) which have demonstrated noticeable subjective quality improvement compared with JPEG2K, HEVC-based BPG and another learned image compression method. All relevant materials are made publicly accessible at https://njuvision.github.io/Neural-Object-Coding/. 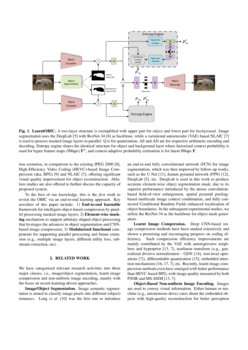 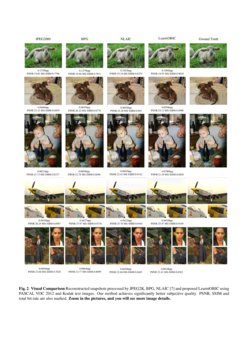 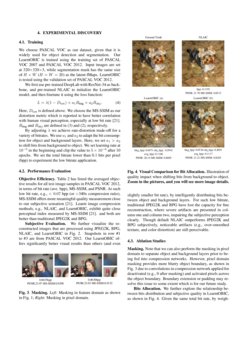 Learning to segment from object sizes

Thousand to One: Semantic Prior Modeling for Conceptual Coding

Visual information accounts for more than 70% of all sensory input in our human body111https://antranik.org/the-eye-and-vision/. A typical representative example of visual information illustration is an image where objects (e.g., face, car plate, building, etc), background, and their relative layered associations are presented to convey information. Ideally, image is a composite model of relevant objects by which appropriate visual perception (e.g., depth, geometry, photometric attributes, etc) and content understanding (e.g., segmentation, classification, etc) based applications are performed.

Therefore, a straightforward application-driven image restoration is to reconstruct its embedded and meaningful objects, rather the entire scene, which has promised a great potential for both low bitrate and high-level semantical applications. It had led to extensive explorations on object-based image coding (OBIC) about two decades ago. However, it had rarely been applied in practice, even with a industry standard (e.g., MPEG-4 [1]) concluded at that time. This is mainly due to the inefficient compact object representation and insufficient computing capability back to early 2000’s. For example, although shape-adaptive discrete wavelet and cosine transforms [2, 3] were dedicatedly developed for arbitrary shape support, they introduced a great amount of computational cost for implementation.

Recently, thanks to the advances in algorithm and hardware of deep learning

[4], we have envisioned the emerging breakthrough of such classical OBIC problem. Here, key issue behind is how to efficiently segment and compress objects from an image, at the element or pixel granularity to support arbitrary-shaped representation. Thus, we have proposed to apply the element-wise masking mechanism to activate or deactivate pixels for arbitrary-shaped object processing which can be easily coupled with regular stacked convolutions to efficiently exploit local spatial correlation, without resorting for dedicated shape-adaptive tool design as in [2, 3].

Towards this goal, we choose to use the segmentation network (e.g., DeepLab) in [5] to derive the element-wise mask which is utilized to produce masked image layers (e.g., object, or background) for subsequent parallel image compression and reconstruction222For simplicity, we have devised a binary mask, for a foreground object layer and a background layer. Multiple image layers can be supported easily.

[7] that can efficiently leverage the properties of masking and convolutional operations, for high-efficiency shape-adaptive object processing. All components are connected and optimized in an end-to-end learning framework, as shown in Fig. 1, where masked image layers are processed in parallel. This system is referred to as the LearntOBIC. Rate-distortion optimization (RDO) is conducted to maximize the visual quality at a given bitrate budget.

et al. [10] was the first one to introduce an end-to-end fully convolutional network (FCN) for image segmentation, which was then improved by follow-up works, such as the U-Net [11], feature pyramid network (FPN) [12], DeepLab [5], etc. DeepLab is used in this work to produce accurate element-wise object segmentation mask, due to its superior performance introduced by the atrous convolution-based field-of-view enlargement, spatial pyramid pooling-based multiscale image context combination, and fully connected Conditional Random Fields enhanced localization of object boundaries. In the subsequent experimental studies, we utilize the ResNet-34 as the backbone for object mask generation.

Deep CNN-based image compression methods have been studied extensively and shown a promising and encouraging progress on coding efficiency. Such compression efficiency improvements are mainly contributed by the VAE with autoregressive neighbors and hyperprior

Object-Based Non-uniform Image Encoding. Images are used to convey visual information. Either human or machine (e.g., autonomous drive) cares about the embedded objects with high-quality reconstruction for better perception and understanding. Thus, non-uniform image encoding has been investigated to allocate different bitrate budgets for objects or region-of-interests  [18, 19, 20] with non-uniform reconstructed qualities. However, performance always suffered because it was difficult to implement pixel-wise object representation in such conventional block-based system, and to apply the joint optimization between segmentation and compression.

Leveraging the advances in learning-based image segmentation, compression and quality control (as discussed in Section 2), we have proposed to integrate the segmentation network with image compression network in a fully end-to-end learnable framework, for efficient object-based image coding. We have exemplified our LearntOBIC using a two-layer decomposition structure including the (foreground) object and background, as shown in Fig. 1.

We use DeepLab [5] to classify input image for the element-wise mask derivation. As revealed in our simulations, object segmentation accuracy in compression task is not as crucial as in other vision tasks (e.g., recognition). Thus, we choose to use ResNet-34 as the backbone for DeepLab to generate masks, instead of the original ResNet-101, considering the balanced tradeoff between the accuracy and computational complexity. As shown in Table 1, there is negligible compression efficiency loss for applying the ResNet-34 with ≈10% segmentation accuracy drop measured using mIOU, but 2× speedup with half GFLOPs requirement, in comparison to the RestNet-101. Our LearntOBIC can be easily extended to support masks generated by various segmentation works.

For the two-layer structure, we are using the binary mask to indicate the feature elements (e.g., pixels) corresponding to the foreground object and background, respectively. We refer M as the object mask while (1-M) is the background mask. Masks can be augmented with image in its pixel domain or feature domain, via element-wise multiplication. Here, we choose to apply the mask in feature domain to derive corresponding activated fMaps of respective object and background,

F is the latent fMaps generated by NLAIC encoder in Fig. 1 and ⊗ is the element-wise multiplication. Note that M presents the same height H and width W as F at a size of H×W×C with C for the number of channels. Identical mask M or (1−M) is applied to all channels. Masked fMaps will then be processed in parallel for independent quantization and context modeling using hyper encoder-decoder pairs.

We use NLAIC as the basic codec unit to process the object and background layers. NLAIC uses the popular stacked CNN-based VAE structure with both hyperpriors and autoregressive neighbors for context modeling.

Masked fMaps, i.e., Fobj and Fbkg, are fed into hyper encoder-decoder pairs for accurate context modeling. Conditional probability Pobj or Pbkg for latent fMaps, and factorized probability Phobj or Phbkg for hyper fMaps, are applied to respective object and background layer for accurate entropy rate estimation that will be devised for RDO and actual binary bits generation.

Rate estimation is used for object or background layer individually, each of which will have rate dissipated at both latent and hyper fMaps, i.e.,

with ∑ indicating the entropy sum by traversing all feature elements. On the contrary, we will use the total distortion between compressed result and input image, e.g., Dtot=D(Iout,Iin), that can be measured using PSNR, MS-SSIM or even feature loss for end-to-end learning.

For implementation, we can put compressed object and background layers in separated sub-streams for subsequent multiplexing, by which we can offer the individual layer reconstruction by extracting specific sub-stream. This would generally enable the capability for object-based tasks, without streaming and decoding the entire image.

We first use pre-trained DeepLab with ResNet-34 as backbone, and pre-trained NLAIC to initialize the LearntOBIC model, and then finetune it using the loss function:

Here, Dtot is defined above. We choose the MS-SSIM as our distortion metric which is reported to have better correlation with human visual perception, especially at low bit rate [21]. Rbkg and Robj are defined in (3) and (2), respectively.

By adjusting λ we achieve rate-distortion trade-off for a variety of bitrates. We use a1 and a2 to adapt the bit consumption for object and background layers. Here, we set a1>a2 to shift bits from background to object. We set learning rate at 10−5 in the beginning and clip the value to 5×10−6

after 10 epochs. We set the total bitrate lower than 0.1 bits per pixel (bpp) to experiment the low bitrate application.

Subjective Evaluation. We further visualize the reconstructed images that are processed using JPEG2K, BPG, NLAIC, and LearntOBIC in Fig. 2. Snapshots in row #1 to #3 are from PASCAL VOC 2012. Our LearntOBIC offers significantly better visual results than others (and even slightly smaller bit rate), by intelligently distributing bits between object and background layers. For such low bitrate, traditional JPEG2K and BPG have lost the capacity for fine reconstruction, where severe artifacts are presented in column one and column two, impairing the subjective perception clearly. Though default NLAIC outperforms JPEG2K and BPG subjectively, noticeable artifacts (e.g., over-smoothed texture, and color distortion) are still perceivable.

Masking. Note that we can also perform the masking in pixel domain to separate object and background layers prior to being fed into compression networks. However, pixel domain masking provides more blurry object boundary, as shown in Fig. 3

due to convolutions in compression network applied for deactivated (e.g., 0 after masking) and activated pixels across the object boundary. Boundary extension or padding may resolve this issue to some extent which is for our future study.

Bits Allocation. We further explore the relationship between bits distribution and subjective quality in LearntOBIC, as shown in Fig. 4. Given the same total bit rate, by weighing more attention to foreground object with more bits, e.g., from Fig. 4(b) to Fig. 4(a), its texture can be reconstructed with finer details, but background is deteriorated with slightly color distortion. This would generally be of interest for applications with the focus on the object, rather the entire image. An interesting exploration avenue is how to automatically shift bits for task oriented applications.

We proposed an object-based image compression method, referred to as the LearntOBIC, by integrating the segmentation network and compression network in an end-to-end learnable framework. With this learning-based approach, we could offer the element-wise operations (e.g., masking, convolution-based transforms, etc) to efficiently support the processing of arbitrary-shaped objects. Compared with traditional JPEG2K, HEVC-based BPG, as well as the recent learning-based NLAIC, our LearntOBIC offers much improved visual quality for the application scenarios at a very low bitrate.

The OBIC itself is an interesting problem since both human beings and machines are weighing more attentions on particular/salient objects within an image, rather the entire scene, for task oriented application. This work is our preliminary attempt to revisit the classic OBIC defined almost two decades ago. There are a lot of interesting problems for further investigation. For example, segmentation is generally content dependent. How to make it more robust in this LearntOBIC framework is worth for deep study. On the other hand, how to use sub-stream that corresponds to the image object layer, and how to distribute bits intelligently, are crucial for object-based visual tasks.