The current paper is to investigate the numerical approximation of logistic type chemotaxis models in one space dimension with a free boundary. Such a model with a free boundary describes the spreading of a new or invasive species subject to the influence of some chemical substances in an environment with a free boundary representing the spreading front (see Bao and Shen [1], [2]). The main challenges in the numerical studies lie in tracking the moving free boundary and the nonlinear terms from chemical. To overcome them, a front fixing framework coupled with finite difference method is introduced. The accuracy of the proposed method, the positivity of the solution, and the stability of the scheme are discussed.The numerical simulations agree well with theoretical results such as the vanishing spreading dichotomy, local persistence, and stability. These simulations also validate some conjectures in our future theoretical studies such as the dependence of the vanishing-spreading dichotomy on the initial solution u0, initial habitat h0, the moving speed ν and the chemotactic sensitivity coefficients ḩi̧1,ḩi̧2. 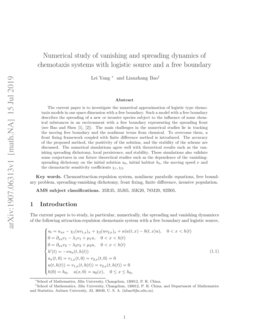 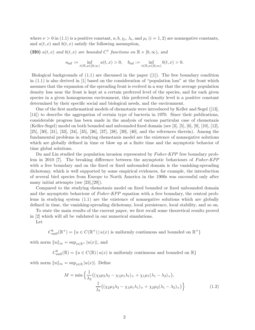 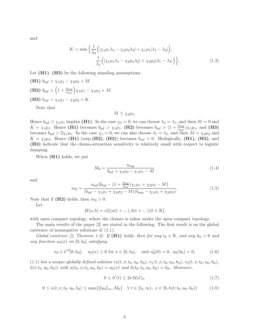 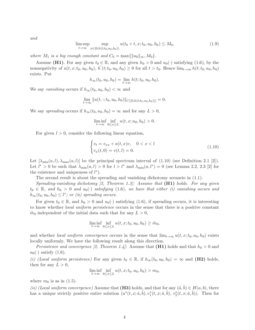 The main target of this paper is to present a new and efficient method t...
Farzaneh Nasresfahani, et al. ∙

In this paper, the robust stability and convergence to the true state of...
Nestor N. Deniz, et al. ∙

We introduce and analyse a fully discrete approximation for a mathematic...
Robert Nürnberg, et al. ∙

The supercooled Stefan problem and its variants describe the freezing of...
Vadim Kaushansky, et al. ∙

The current paper is to study, in particular, numerically, the spreading and vanishing dynamiccs of the following attraction-repulsion chemotaxis system with a free boundary and logistic source,

Biological backgrounds of (1.1) are discussed in the paper ([1]). The free boundary condition in (1.1) is also derived in [1] based on the consideration of “population loss” at the front which assumes that the expansion of the spreading front is evolved in a way that the average population density loss near the front is kept at a certain preferred level of the species, and for each given species in a given homogeneous environment, this preferred density level is a positive constant determined by their specific social and biological needs, and the environment.

Du and Lin studied the population invasion represented by Fisher-KPP free boundary problem in 2010 [7]. The breaking difference between the asymptotic behaviours of Fisher-KPP with a free boundary and on the fixed or fixed unbounded domain is the vanishing-spreading dichotomy, which is well supported by some empirical evidences, for example, the introduction of several bird species from Europe to North America in the 1900s was successful only after many initial attempts (see [23],[29]).

Compared to the studying chemotaxis model on fixed bounded or fixed unbounded domain and the asymptotic behaviour of Fisher-KPP equation with a free boundary, the central problems in studying system (1.1) are the existence of nonnegative solutions which are globally defined in time, the vanishing-spreading dichotomy, local persistence, local stability, and so on.

To state the main results of the current paper, we first recall some theoretical results proved in [2] which will all be validated in our numerical simulations.

The main results of the paper [2] are stated in the following. The first result is on the global existence of nonnegative solutions of (1.1).

For given l>0, consider the following linear equation,

The second result is about the spreading and vanishing dichotomy scenario in (1.1).

For given t0∈R, and h0>0 and u0(⋅) satisfying (1.6), if spreading occurs, it is interesting to know whether local uniform persistence occurs in the sense that there is a positive constant ~m0 independent of the initial data such that for any L>0,

and whether local uniform convergence occurs in the sense that limt→∞u(t,x;t0,u0,h0) exists locally uniformly. We have the following result along this direction.

Biologically, the invasion or spreading of the population is depending on the initial solution, initial habitat, the moving speed ν ([7]). When the spreading happens, the local persistence and convergence can be guaranteed in Fisher-KPP equation with a free boundary, furthermore, there is a asymptotic spreading speed such that limt→∞h(t)t=c∗>0 (see [7], [16]).

Compared to the vanishing-spreading dichotomy in Fisher-KPP equation with a free boundary, the chemotaxis system (1.1) do not have comparison principle which leads the following interesting open problems but has positive answers in Fisher-KPP case.

Vanishing-spreading result [2, Theorem 1.2] indicate there is a separating value l∗, which is independent of the chemotactic sensitivity coefficients χ1,χ2, such that in the vanishing scenario the limiting moving boundary h∞<l∗ and when the initial habitat h0>l∗ the spreading guaranteed. The dependence of the dynamics of the system on the chemotactic sensitivity coefficients is another important and interesting questions [28], [38]. We also have the following question in this direction.

If the asymptotic spreading speed exist, whether the limit limt→∞h(t)t=c∗ depends on the chemotactic sensitivity coefficient χ1 and χ2.

The objective of the current paper is to study the numerical effect of the parameters σ,ν,χ1,χ2 on the vanishing and spreading dynamics in the system (1.1) which will give us directions in the theoretical studies. For simplicity, we only consider the constant logistic coefficients in the system, where a(t,x)=a,b(t,x)=b. In general, it is always difficult to handle the attraction term in chemotaxis system which may lead to convection dominant in the system [4], [19], [20], [26]. However, in the system (1.1), we have extra numerical challenges in efficiently and accurately handling the moving boundaries [24]. These two challenges require us to construct a new numerical algorithm in the numerical study.

Thanks to the maximum principle in the elliptic equation and death damping coefficient b in the parabolic equation, the chemoattraction term can be controlled by the magnitude of the population density which has a global bound by the suppressing of the death rate. The front-fixing method has been successfully applied to solve one dimensional free boundary problem [15], [21], [22], [24] which changes the moving boundary to fixed domain, and is the main concern in our numerical studies of (1.1). Combined with the front-fixing method, finite difference in parabolic and finite volume method in the elliptic equations in the system (1.1), we construct a new algorithm in the numerical study, as a by-product we also obtain the consistency, monotonicity of the moving boundary, positivity of the solution and stability results.

Our numerical experiments validate the vanishing and spreading dichotomy in the numerical scheme of system (1.1) which is similar to Fisher-KPP equation with a free boundary and give evidences to our conjectures that:

The rest of this paper is organized in the following way. In section 2, we first use Landau transformation to transfer the moving boundary to a fixed domain, then we use the finite difference, finite volume, and iteration method to approximate the continuous chemotaxis system. We also prove the monotonicity of the moving boundary, the positivity and stability of the discrete solutions. In section 3, we study the numerical spreading-vanishing dichotomy in (1.1) which validates our theoretical results (Vanishing-spreading dichotomy, local persistence and convergence). Our simulations also indicate the dependence or independence of the vanishing-spreading dichotomy on parameters ν,u0,h0,χ1,χ2 and so on. In section 4, some future works are briefly discussed.

In this section, we study the numerical approximation of system (1.1) with constant logistic coefficients a(t,x)=a,b(t,x)=b. First through the well-known Landau transformation (see [15]), we convert (1.1) into a fixed spatial domain problem. In such a way the length of the moving boundary is included as another variable to be solved apart from the population density. Then we solve the converted new problem on the basis of finite difference and finite volume method. There is a circulation that each time when time variable increase we solve the elliptic equations first and using the forward differential method to find the solution of the parabolic equation for the new time.

From the elliptic equations in (1.1), we know that

Then we introduce the Landau transformation,

Under this substitution the elliptic equations (2.1), (2.2) take the form:

The elliptic boundary conditions are

Let G(t) denote h2(t) and multiply it on both sides of the above equation.

The initial conditions in (1.1) become:

and the initial function u0(x) is changed into w0(z) which maintains:

The following is the process according to the theory of the finite difference method. First we consider the time and space discretization τ=△t, h=△z=1/M, which means the interval (0,1) is divided into M equal cells

By using the forward approximation of the time derivative, we get

We mainly focus on solving the values of V1, the relevant results about V2 can be obtained in a similar way. For (2.15), 1≤j≤M−1, we can get M−1 equations for V1 and there are two other equations we need for the boundary. In order to achieve a higher O(h2) accuracy (see [18]), we use the idea of finite volume method to handle the boundary conditions.

We get the equation for the left boundary:

The equation for the right boundary is similar:

Considering the Stefan condition (2.12), according to (2.17) and three points backward spatial approximation of ∂w∂z(t,1), we obtain

), we can obtain a optimal error estimates for the numerical approximation. Consider (