This paper is devoted to the study of a hemivariational inequality modeling the quasistatic bilateral frictional contact between a viscoelastic body and a rigid foundation. The damage effect is built into the model through a parabolic differential inclusion for the damage function. A solution existence and uniqueness result is presented. A fully discrete scheme is introduced with the time derivative of the damage function approximated by the backward finite different and the spatial derivatives approximated by finite elements. An optimal order error estimate is derived for the fully discrete scheme when linear elements are used for the velocity and displacement variables, and piecewise constants are used for the damage function. Simulation results on numerical examples are reported illustrating the performance of the fully discrete scheme and the theoretically predicted convergence orders. 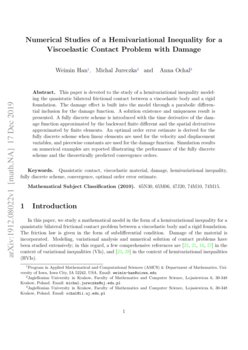 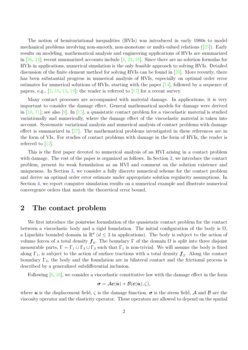 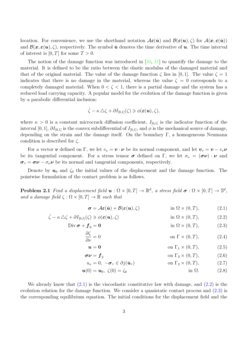 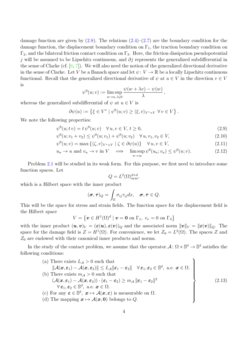 This paper is devoted to a study of time-dependent hemivariational inequ...
Michal Jureczka, et al. ∙

We are concerned with the mathematical modeling of the polarization proc...
Astrid S. Pechstein, et al. ∙

The notion of hemivariational inequalities (HVIs) was introduced in early 1980s to model mechanical problems involving non-smooth, non-monotone or multi-valued relations ([25]). Early results on modeling, mathematical analysis and engineering applications of HVIs are summarized in [26, 24]; recent summarized accounts include [4, 23, 28]. Since there are no solution formulas for HVIs in applications, numerical simulation is the only feasible approach to solving HVIs. Detailed discussion of the finite element method for solving HVIs can be found in [20]. More recently, there has been substantial progress in numerical analysis of HVIs, especially on optimal order error estimates for numerical solutions of HVIs, starting with the paper [14], followed by a sequence of papers, e.g., [2, 18, 13, 19]; the reader is referred to [17] for a recent survey.

Many contact processes are accompanied with material damage. In applications, it is very important to consider the damage effect. General mathematical models for damage were derived in [10, 11]; see also [9]. In [15], a quasistatic contact problem for a viscoelastic material is studied variationally and numerically, where the damage effect of the viscoelastic material is taken into account. Systematic variational analysis and numerical analysis of contact problems with damage effect is summarized in [27]. The mathematical problems investigated in these references are in the form of VIs. For studies of contact problems with damage in the form of HVIs, the reader is referred to [12].

This is the first paper devoted to numerical analysis of an HVI arising in a contact problem with damage. The rest of the paper is organized as follows. In Section 2, we introduce the contact problem, present its weak formulation as an HVI and comment on the solution existence and uniqueness. In Section 3, we consider a fully discrete numerical scheme for the contact problem and derive an optimal order error estimate under appropriate solution regularity assumptions. In Section 4, we report computer simulation results on a numerical example and illustrate numerical convergence orders that match the theoretical error bound.

We first introduce the pointwise formulation of the quasistatic contact problem for the contact between a viscoelastic body and a rigid foundation. The initial configuration of the body is Ω, a Lipschitz bounded domain in Rd (d≤3 in applications). The body is subject to the action of volume forces of a total density \boldmath{f}0. The boundary Γ of the domain Ω is split into three disjoint measurable parts, Γ=Γ1∪Γ2∪Γ3 such that Γ1 is non-trivial. We will assume the body is fixed along Γ1, is subject to the action of surface tractions with a total density \boldmath{f}2. Along the contact boundary Γ3, the body and the foundation are in bilateral contact and the frictional process is described by a generalized subdifferential inclusion.

Following [8, 16], we consider a viscoelastic constitutive law with the damage effect in the form

where κ>0 is a constant microcrack diffusion coefficient, I[0,1] is the indicator function of the interval [0,1], ∂I[0,1] is the convex subdifferential of I[0,1], and ϕ is the mechanical source of damage, depending on the strain and the damage itself. On the boundary Γ, a homogeneous Neumann condition is described for ζ.

be its tangential component. For a stress tensor

Denote by \boldmath{u}0 and ζ0 the initial values of the displacement and the damage function. The pointwise formulation of the contact problem is as follows.

We already know that (2.1) is the viscoelastic constitutive law with damage, and (2.2) is the evolution relation for the damage function. We consider a quasistatic contact process and (2.3) is the corresponding equilibrium equation. The initial conditions for the displacement field and the damage function are given by (2.8). The relations (2.4)–(2.7) are the boundary condition for the damage function, the displacement boundary condition on Γ1, the traction boundary condition on Γ2, and the bilateral friction contact condition on Γ3. Here, the friction dissipation pseudopotential j will be assumed to be Lipschitz continuous, and ∂j represents the generalized subdifferential in the sense of Clarke (cf. [6, 7]). We will also need the notion of the generalized directional derivative in the sense of Clarke. Let V be a Banach space and let ψ:V→R be a locally Lipschitz continuous functional. Recall that the generalized directional derivative of ψ at u∈V in the direction v∈V is

whereas the generalized subdifferential of ψ at u∈V is

We note the following properties:

Problem 2.1 will be studied in its weak form. For this purpose, we first need to introduce some function spaces. Let

which is a Hilbert space with the inner product

This will be the space for stress and strain fields. The function space for the displacement field is the Hilbert space

In the study of the contact problem, we assume that the operator A:Ω×Sd→Sd satisfies the following conditions:

Similarly, we assume the operator B:Ω×Sd×R→Sd has the following properties:

As an example of the viscoelastic constitutive law with damage, we consider

where the viscosity tensor A satisfies (2.13), η is a positive coefficient, K(ζ) is a damage dependent elasticity set, which is assumed to be convex and PK(ζ) is the projection operator onto the set K(ζ). We require the properties \boldmath{0}∈K(ζ) and ζ1≥ζ2 implies K(ζ1)⊂K(ζ2). The second property implies that as the damage of the material increases, i.e., the value of the damage function ζ decreases, the elasticity convex set expands, and the material resembles a purely viscous one. A concrete example is given by the von Mises convex set

On the damage source function ϕ:Ω×Sd×R→R, the assumptions are

On the friction dissipation pseudopotential j:Γ3×Rd→R,

on the microcrack diffusion coefficient,

on the densities of forces and tractions,

on the initial data. Here K represents the set of admissible damage functions defined by

By the Riesz representation theorem, we can define \boldmath{f}:[0,T]→V by

Let a:Z×Z→R be the bilinear form

Denote by cτ the smallest constant in the trace inequality

In the numerical solution of Problem 2.2, it will be convenient to introduce the velocity variable

3 Numerical analysis of the weak formulation

In this section, we introduce and study a fully discrete numerical scheme to solve Problem 2.2. We assume the conditions stated in Theorem 2.3 are valid so that Problem 2.2 has a unique solution.

For the approximation of the time derivative of the damage function, we use finite difference. We divide the time interval [0,T] uniformly and comment that much of the discussion of the numerical method below can be extended straightforward to the case of general partition of the time interval. Thus, let N be a positive integer, and define k=T/N the step-size. Then 0=t0<t1<⋯<tN=T is a uniform partition of [0,T] with the nodes tn=nk, n=0,1,⋯,N. For a function z(t) continuous on [0,T], we write zn=z(tn). We use the backward difference approximation

For the spatial discretization, we use the finite element method. For simplicity, we assume Ω is a polygonal/polyhedral domain, and express the three parts of the boundary, Γk, 1≤k≤3, as unions of closed flat components with disjoint interiors:

Let {Th}h be a regular family of finite element partitions of ¯¯¯¯Ω into triangular/tetrahedral elements, compatible with the partition of the boundary ∂Ω into Γk,i, 1≤i≤ik, 1≤k≤3, in the sense that if the intersection of one side/face of an element with one set Γk,i has a positive measure with respect to Γk,i, then the side/face lies entirely in Γk,i. Here h→0 denotes the finite element mesh-size. Corresponding to the partition Th, we introduce the linear finite element space

for the displacement field, the piecewise constant finite element space

for the stress field, and the linear finite element space

for the damage field. Define the constrained subset of Zh:

to be the interpolant or

Then a fully discrete scheme for Problem 2.2 is the following.

Note that for implementation, (3.8) and (3.9) are combined together to give

The solution existence and uniqueness of Problem 3.1 can be proved by an induction argument. The focus of the rest of this section is to bound the numerical solution errors. For this purpose, we assume the following additional solution regularities: