Numerical solution of the heat conduction problem with memory

It is necessary to use more general models than the classical Fourier heat conduction law to describe small-scale thermal conductivity processes. The effects of heat flow memory and heat capacity memory (internal energy) in solids are considered in first-order integrodifferential evolutionary equations with difference-type kernels. The main difficulties in applying such nonlocal in-time mathematical models are associated with the need to work with a solution throughout the entire history of the process. The paper develops an approach to transforming a nonlocal problem into a computationally simpler local problem for a system of first-order evolution equations. Such a transition is applicable for heat conduction problems with memory if the relaxation functions of the heat flux and heat capacity are represented as a sum of exponentials. The correctness of the auxiliary linear problem is ensured by the obtained estimates of the stability of the solution concerning the initial data and the right-hand side in the corresponding Hilbert spaces. The study's main result is to prove the unconditional stability of the proposed two-level scheme with weights for the evolutionary system of equations for modeling heat conduction in solid media with memory. In this case, finding an approximate solution on a new level in time is not more complicated than the classical heat equation. The numerical solution of a model one-dimensional in space heat conduction problem with memory effects is presented. 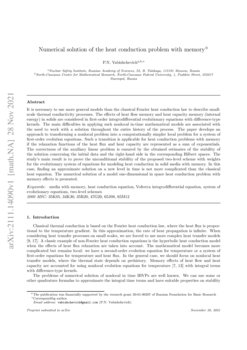 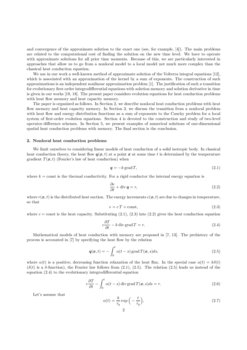 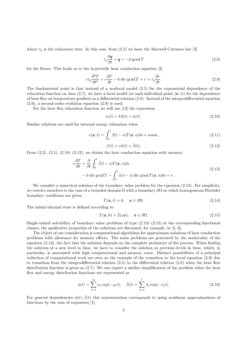 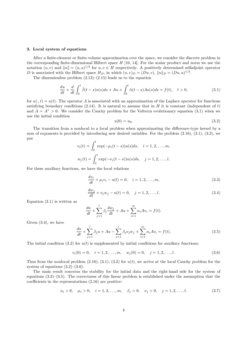 We consider the problems of the numerical solution of the Cauchy problem...
Petr N. Vabishchevich, et al. ∙

The entropy of a thermodynamic graph

Inverse heat conduction to model and optimise a geothermal field

The design of heat exchanger fields is a key phase to ensure the long-te...
Nadaniela Egidi, et al. ∙

In this paper we deal with an abstract problem which includes the linear...
Shunsuke Kurima, et al. ∙

Classical thermal conduction is based on the Fourier heat conduction law, where the heat flux is proportional to the temperature gradient. In this approximation, the rate of heat propagation is infinite. When considering heat transfer processes on small scales, we are forced to use more complex heat transfer models joseph1989heat ; straughan2011heat . A classic example of non-Fourier heat conduction equations is the hyperbolic heat conduction model when the effects of heat flux relaxation are taken into account. The mathematical model becomes more complicated but remains local: we have a second-order evolution equation for temperature or a system of first-order equations for temperature and heat flux. In the general case, we should focus on nonlocal heat transfer models, where the thermal state depends on prehistory. Memory effects of heat flow and heat capacity are accounted for using nonlocal evolution equations for temperature gurtin1968general ; nunziato1971heat with integral terms with difference-type kernels.

The problems of numerical solution of nonlocal in time IBVPs are well known. We can use some or other quadrature formulas to approximate the integral time terms and have suitable properties on stability and convergence of the approximate solution to the exact one (see, for example, ChenBook1998

). The main problems are related to the computational cost of finding the solution on the new time level. We have to operate with approximate solutions for all prior time moments. Because of this, we are particularly interested in approaches that allow us to go from a nonlocal model to a local model not much more complex than the classical heat conduction equation.

We use in our work a well-known method of approximate solution of the Volterra integral equations linz1985analytical , which is associated with an approximation of the kernel by a sum of exponents. The construction of such approximations is an independent nonlinear approximation problem braess1986nonlinear . The justification of such a transition for evolutionary first-order integrodifferential equations with solution memory and solution derivative in time is given in our works vabMemory ; vabMemoryB . The present paper considers evolution equations for heat conduction problems with heat flow memory and heat capacity memory.

The paper is organized as follows. In Section 2, we describe nonlocal heat conduction problems with heat flow memory and heat capacity memory. In Section 3, we discuss the transition from a nonlocal problem with heat flow and energy distribution functions as a sum of exponents to the Cauchy problem for a local system of first-order evolution equations. Section 4 is devoted to the construction and study of two-level operator-difference schemes. In Section 5, we present examples of numerical solutions of one-dimensional spatial heat conduction problems with memory. The final section is the conclusion.

where k=const is the thermal conductivity. For a rigid conductor the internal energy equation is

where r(x,t) is the distributed heat suction. The energy increments e(x,t) are due to changes in temperature, so that

where α(t) is a positive, decreasing function relaxation of the heat flux. In the special case α(t)=kδ(t) (δ(t) is a δ-function), the Fourier law follows from (2.1), (2.5). The relation (2.5) leads us instead of the equation (2.4) to the evolutionary integrodifferential equation

where τq is the relaxation time. In this case, from (2.5) we have the Maxwell-Cattaneo law cattaneo1948sulla

for the fluxes. This leads us to the hyperbolic heat conduction equation bubnov1976wave

The fundamental point is that instead of a nonlocal model (2.5) for the exponential dependence of the relaxation function on time (2.7), we have a local model (at each individual point (x,t)) for the dependence of heat flux on temperature gradient as a differential relation (2.8). Instead of the integrodifferential equation (2.6), a second-order evolution equation (2.9) is used.

Similar relations are used for internal energy relaxation when

We consider a numerical solution of the boundary value problem for the equation (2.13). For simplicity, we restrict ourselves to the case of a bounded domain Ω with a boundary ∂Ω on which homogeneous Dirichlet boundary conditions are given:

The initial thermal state is defined according to

Single-valued solvability of boundary value problems of type (2.13)–(2.15) in the corresponding functional classes, the qualitative properties of the solutions are discussed, for example, in davis1976hyperbolicity ; davis1978linear .

The object of our consideration is computational algorithms for approximate solutions of heat conduction problems with allowance for memory effects. The main problems are generated by the nonlocality of the equation (2.13), the fact that the solution depends on the complete prehistory of the process. When finding the solution at a new level in time, we have to consider the solution at previous levels in time, which, in particular, is associated with high computational and memory costs. Distinct possibilities of a principal reduction of computational work are seen on the example of the transition to the local equation (2.9) due to transition from the integrodifferential relation (2.5) to the differential relation (2.8) when the heat flow distribution function is given as (2.7). We can expect a similar simplification of the problem when the heat flux and energy distribution functions are represented as

For general dependencies ~α(t),~β(t) this representation corresponds to using nonlinear approximations of functions by the sum of exponents braess1986nonlinear .

After a finite-element or finite-volume approximation over the space, we consider the discrete problem in the corresponding finite-dimensional Hilbert space H KnabnerAngermann2003 ; QuarteroniValli1994 . For the scalar product and norm we use the notation (u,v) and ∥u∥=(u,u)1/2 for u,v∈H respectively. A positively determined selfadjoint operator D is associated with the Hilbert space HD, in which (u,v)D=(Du,v), ∥u∥D=(Du,u)1/2.

for u(⋅,t)=u(t). The operator A is associated with an approximation of the Laplace operator for functions satisfying boundary conditions (2.14). It is natural to assume that in H it is constant (independent of t) and A=A∗>0. We consider the Cauchy problem for the Volterra evolutionary equation (3.1) when we use the initial condition

The transition from a nonlocal to a local problem when approximating the difference-type kernel by a sum of exponents is provided by introducing new desired variables. For the problem (2.16), (3.1), (3.2), we put

For these auxiliary functions, we have the local relations

The main result concerns the stability for the initial data and the right-hand side for the system of equations (3.3)–(3.5). The correctness of this linear problem is established under the assumption that the coefficients in the representations (2.16) are positive:

Let us multiply equation (3.5) scalarly in H by u(t), separate equations (3.3) by αiAvi(t), and equations (3.4) by βjνjwj(t). The summation of these equations gives

This a priori estimate is standard for the problem without memory effects (~α(t)=~β(t)≡0 in equation (3.1)).

When approximating first-order evolution equations, it is natural to focus on standard two-level schemes with weights LeVeque2007 ; SamarskiiTheory . Without limiting generality, we will assume that the time grid is uniform, i.e. tn=nτ, n=0,1,…, where τ>0 is time step. We denote the approximate solution at time tn by un,  n=0,1,… and let

For the approximate solution of the problem (3.2)–(3.6), we will use a two-level scheme

where, for example, φn+σ=f(tn+σ). The stability of this scheme is established under standard constraints on the weight of σ.

From the inequality (4.6), it follows

Under our constraints on σ, we have

Thus from the inequality (4.7), we obtain the estimate

From this follows the inequality being proved (4.5). ∎

where I is a unit operator, and

The operator B=B∗>0, where B=bII+στbAA, and so equation (4.10) is uniquely solvable for un+1. After finding un+1, the auxiliary quantities vi, i=1,2,…,m, wj, j=1,2,…,l, are calculated according to (4.8), (4.9). The increase in the computational complexity of the numerical solution of problems with memory is not fundamental in comparison to the problem without memory effects.

In the above calculations, we have limited ourselves to one-dimensional problems in space. Considering the current state of numerical solution of boundary value problems for elliptic equations, the transition to more complex multidimensional problems of heat conduction with memory is not of fundamental nature. The methodological issues of estimating the rate of convergence of the approximate solution to the exact solution of the system of evolution equations are not discussed. We present numerical data on sufficiently detailed computational grids in time and space when we can neglect computational errors.

To illustrate the peculiarities of problems with memory effects, we consider the equation (3.1) in which

It makes sense to distinguish the following separate classes of heat conduction problems, for which we will give the corresponding equation for temperature.

The standard model of thermal conductivity without regard to memory effects corresponds to the initial condition (3.2) and α=β=0:

In this telegraph equation, the term at the first derivative of the solution in time describes the damping effects and the term with the solution — the oscillatory effects. The initial conditions follow from (5.4) and equation (5.3) at t=0:

Again we have a telegraph equation for temperature, for which the initial conditions are given as

Numerical illustrations of the features of local generalized thermal conductivity models are given, usually (see, for example, shen2008notable ; hu2009study ; zhang2013numerical ) tracing the dynamics of the initial temperature profile. We consider a similar test problem whose numerical solution is carried out with a difference space approximation. Let us assume that in dimensionless variables x∈[0,1] and a uniform grid with step h is introduced. Let us denote by ω the set of internal nodes of the grid in space. Given (2.14), for y(x)=0, x∉ω, we define the difference operator A by the relation

The initial condition (3.2) is taken as

The dynamics of the process when using model 1 is presented in Fig. 1, and for model 4 — in Fig. 2. The effects of heat flux memory and heat capacity lead to a significant rearrangement of the temperature profile. The influence of individual parameters of the mathematical model is traced to models 2 and 3.

The results of heat flow memory (model 2) are presented in Figs. 3, 4. The influence of the parameter α is most pronounced. At large α strong oscillatory effects are observed. In particular, at time t=0.1 at α=10, we observe negative values of the solution u(x,t).

Similar calculated data for heat capacity memory (model 3) are presented in Figs. 5, 6. In this model, the effects of dissipation are most pronounced.